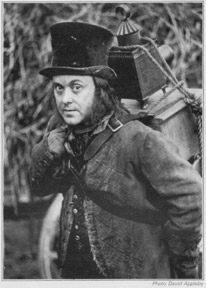 Reproduced with the kind permission of the Magic Lantern Society

I dare say it isn't often a film-maker is given an open invitation to advertise his own film, but my excuse is that it's not often (maybe this is the first such occasion) that a film has a Lanternist as one of its principal characters. What's more, a Lanternist who reveals astonishing protean abilities, as you can discover if you see the film!

Comrades tells the story of the Tolpuddle Martyrs in the 1830s, but it has a sub-plot that touches in a variety of ways on the history of pre-cinema. The film is begun and ended by the character of an itinerant Lanternist who is the story-teller, a kind of chorus-figure, who pops in and out of the story in a wide array of disguises, each time bringing with him a different optical entertainment.

For the script, which is being published by Faber & Faber, I found an apt quotation from FitzGerald's translation of the Rubáiyát of Omar Khayyám:

For in and out, above, about, below,
'Tis nothing but a Magic Shadow-show,
Play'd in a Box whose Candle is the Sun,
Round which we Phantom Figures come and go.

(Amazingly, I have since discovered that the same quotation has been used in at least two other publications, The Art of the Moving Picture, 1915 the pioneering study by American poet Vachel Lindsay, and Shadow Show, 1942, a little-known novel about the early days of the silent screen by British author William J. Elliott.)

So let me introduce you to the Lanternist and his thirteen comrades, all brilliantly played in the film by Alex Norton, aided and abetted by make-up artist Elaine Carew.

The film's opening and closing image is a white circle of light, representing both the sun and lantern-light. It is the Lanternist who witnesses a symptomatic outbreak of agricultural machine-breaking that sets the scene in a short pre-title sequence, and then leads us to the village of Tolpuddle. He tries forlornly to interest the villagers in his Galanty show, 'only a penny'; and equally vainly the local squire, Frampton, in 'a show for the family, comical pictures of every description and colour'. But the nearest he gets is to display one of his chromatropes against the lamplight for the solitary pleasure of a servant-girl, and to mesmerise a little girl in the village with a display of hand-shadows in the moonlight.

The Lanternist mysteriously fulfils his role in the early part of the film as Communicator, perhaps even Catalyst in the forming of a Union, but then merges into the background. It is an 'alter ego' who we next discover on the village green at harvest festival in the form of a pegleg old soldier, Sergeant Bell and his Royal Raree Show. Members of the Magic Lantern Society will immediately recognise him, I have no doubts, as having stepped straight from the pages of a little book of that title published in 1839. It is that Charles Dickens had planned to write this work but in the event it was George Mogridge (1787-1854), otherwise known as Peter Parley or Old Humphrey, writer of almost two hundred tales and religious books for children. Since the fictional Sergeant Bell's stamping ground was Taunton and district, it is not impossible that he could have found his way to Tolpuddle on such an important occasion, and his peepshow in the film was dutifully reconstructed from engravings in the book.

His final piece of doggerel incidentally is lifted from another Victorian children's book:

A Raree Show's the thing for all the lads and lasses.
Be careful now, young chisellers, not to breathe on the glasses.

A well-known trompe l'oeil picture, Blossom and Decay, hanging in the window of Wetham's Print Shop, brings us into the town of Dorchester. This may be an anachronism for although I have been unable to date the print, my guess is that it is of later and probably German origin, but the Print Shop was an actual location in the story of the Tolpuddle Martyrs. In all films there are elements left on the cutting-room floor, and unfortunately from this scene in Comrades we have lost a nice shot of a zograscope and Alex Norton's albeit brief appearance as Mr Wetham, the proprietor.

Before we leave Dorchester, our hero - George Loveless - stumbles on a travelling Diorama, and we are treated to a cleverly contrived recreation of the Battle of Waterloo, painted b the designer's father-in-law with lighting effects courtesy of the animator's studio. Sadly this too has been cut in half, as has the Diorama Showman's patter, borrowed word for word from an old poster for Wiggelsworth's Diorama appearing at the Town Hall, Bridgnorth in July 1850.

Alex Norton's next appearance is his briefest, in fact he doesn't move! He appears as an idealised portrait of the Laughing Cavalier in a three-dimensional picture hanging on the wall at the Manor whence the Tolpuddle men go to ask for more money. The Lanternist himself next makes a brief reappearance, entertaining the village children at the time of the strike that ensues. To accompany a popular slipping-slide, Alex was inspired to improvise the following verse:

Who's the next one that we see in our Galanty show?
Why it's three little soldier boys standing at the battle.
They hear the horses gallop, they hear the sabres rattle.
Soon they'll wish that they were safely tucked up in their beds,
Because 'bang' goes the cannon and off comes their heads.

In the corridor outside the court-room where the Tolpuddle men are on trial, an Usher vainly tries to maintain order. Yes, it's Alex again, for both we and the Tolpuddle families can only make out what is going on inside the court as a dumb shadow-show seen through the frosted glass. The same theme is taken up by Alex's next character, Wollaston, who wonders whether George Loveless 'really is the ring-leader or whether there aren't others, what? Some shadow puppet-master up in London manipulating him with rods.' But Wollaston's real function in this scene at the gaming-table is to uncover a marked pack of cards. We see that the spare pack has been marked by one of the other players with a pencil dot along the edge of each card so that in animation it appears to roll to and fro - thus neatly foreshadowing the flicker-book, which was not properly invented until 1868 when Linnett patented his Kineograph.

Persistence of vision is also exemplified in the next two pre-cinema allusions. The trusty thaumatrope is produced by a Ranger who comes by stagecoach to bring relief money to the families from their supporters in London. What more appropriate than the most common image of bird and cage to symbolise the imprisonment of the men at this point in the story; while a sleepy tramp confortably ensconced behind basement railings in Dorchester High Street can make neither head nor tail of the strange optical effect on the spokes of passing carriage wheels - first noted of course by Peter Mark Roget (of Thesaurus fame) in 1824and immortalised as 'Roget's Wheel'. Incidentally, this optical illusion, which passes across the screen in a matter of seconds, caused the crew by far the most difficulty to capture on film and was swiftly redubbed 'Roget's Nightmare', but that's another story…

The journey from England to Australia, which takes us from art I to Part II of the film, is told by way of a painted panorama, beautifully made to order by artist Jim Clancey, and loosely modelled on the moving panoramas that featured in contemporary pantomimes such as Puss in Boots at Covent Garden in 1832, illustrated in Professor Altick's The Shows of London. The Captain of the convict-ship has displayed the toy panorama for the benefit of a Foppish Gentleman. 'For just one penny', he says, 'you can put the world in your pocket.'

Three optical references in the second part of the film trace the invention of photography, starting with the Camera Obscura cunningly introduced in a sequence in which Alex Norton plays his most ferocious character, McCallum, the sadistic guard to a chain gang. The Silhouettist - or cutter of shades - who appears in another episode in Australia, similarly embodies another stage in the evolutionary process with a neat play on black-and-white which I'll leave you to discover for yourselves. Finally, a made inventor in the outback confounds us and all the history books by demonstrating that he had developed a premature 'steam' camera several years before Niépce, Daguerre or Fox Talbot got around to their own discoveries! Unfortunately, his invention was destroyed by a careless Tolpuddle Martyr on his way to freedom and the poor man was never heard of again.

A French caricature print in the series Le Bon Genre, showing a witch-like creature hugging a lantern to her lap, was the irresistible inspiration for our chameleon performer, Alex Norton, to transcend the sex barrier and to present a phantasmagoria. The scene comes close to transcending the time barrier too, giving a prophetic glimpse forward to the first cinématographe performances of Lumière: the skeleton projected onto the smoke prefiguring the train entering the station in its effect on an unsuspecting audience. It acts as a culmination of all the pre-cinema allusions/illusions throughout Comrades, even in somewhat truncated form.

So we come to our Grand Finale and the final reappearance of the Lanternist, now seen as a successful and prosperous figure. He concludes his account of the epic story for the benefit of the audience at a Welcome Home for the Tolpuddle Martyrs at the London Old Vic (or Royal Coburg Theatre as it was then, and filmed at the Bristol Old Vic). Here all praise and thanks to the Magic Lantern expert extraordinaire, Mike Simkin, who provided slides for a shipwreck sequence and came to Bristol with his Noakes triple lantern which appears on stage (and whose sketch of filming in progress appears here). This is a deliberate anachronism, just as George Loveless's voice spans the intervening years to address today's audience in the cinema, given rationalisation in a part of Mr Pitt's speech cut from the film:

Ars magna, lucis et ombrae. In time to come, when common man shall strive to master the Great Arts of Light and Shadow, who know what transformations providence and progress may bestow on all of human kind tomorrow - Deus ex machina?

His words also serve to make explicit the link between the main plot and sub-plot of Comrades - the word 'transformations' says it all. Apart from the most obvious example of the Lanternist himself, almost every other character undergoes some transformation and is seen in the course of the film in a new light. But most basically, the word circumscribes both the magical transformations of Opticks and the longed-for transformations of society.

The film ends with a series of lantern slides telling what became of the Tolpuddle men.

[My thanks to Peter Jewell, my Script Editor and fellow pre-cinema enthusiast, for his assistance in writing this article.]