The Bill Douglas Cinema Museum holds over 75,000 artefacts on the history of the moving image. The core of this collection was put together by Bill Douglas and his friend Peter Jewell. After Bill’s death in 1991 Peter donated the collection to the University. . Bill Douglas was also an accomplished British filmmaker director of the Bill Douglas Trilogy and Comrades. His films are now lauded as some of the most important in British cinema history. We are delighted to announce that we have now acquired Bill Douglas’s working papers, which form a comprehensive and fascinating record of his work and his struggles to get his unique vision onto the screen. Thanks to the generosity of The Bill Douglas and Peter Jewell Trust, intern Arielle Woods catalogued the collection for the museum and describes the process and some of the highlights of the papers below. The papers are available to be accessed by researchers and details can be found here A PhD studentship has been advertised this June to allow a scholar to interpret the papers and put them in the context of the British film industry in the 1970s and 1980s (link).

Arielle says:  As an intern I was tasked with organising and cataloguing the enormous amount of material provided to the museum by Peter Jewell and additional members of Douglas' production crew, which is now able to be accessed by the public. The papers largely consists of material from Bill's "poor-man's epic" Comrades including early script drafts, a full storyboard, production designs from Michael Pickwoad, continuity folders from Penny Eyles, stills, programmes, reviews and even journal entries from Bill himself. The papers also contain a never before seen script draft of My Childhood, the only surviving storyboard of My Ain Folk and correspondence regarding many aspects of the Bill Douglas Trilogy's production.  The working papers also cover: his time teaching at Strathclyde University - including various lectures he gave, finished scripts from unrealized projects, and personal papers and correspondence from friends and neighbors who often helped with his films.

Our aim in creating the archive is to provide a resource for students and scholars alike to gain an intimate understanding of Bill Douglas, his films and the process of filmmaking. The archive is arranged in such a way as to show the natural progression of Bill's career, with items ranging from a programme from his first performed play in 1962, to his final screenplays from 1990. The Bill Douglas Papers is an archive that will give researchers the ability to view the process with which his films were made and the authorial vision with which he made them. 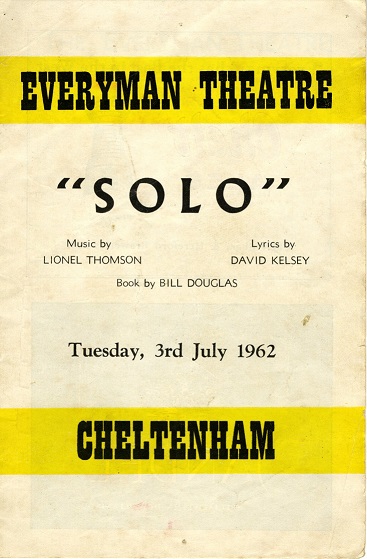 I was introduced to Bill Douglas' work during my first year at Exeter when my class, ‘Film Studies: An Introduction’, screened the Trilogy. I was gripped by the raw intensity of the images. Peter Jewell, the main donor of the Bill Douglas Cinema Museum, also spoke before the screening and his knowledge of not just Bill's work but film in general was expansive and left me wanting to learn more. Later that year I began volunteering at the museum and when the role of archive cataloguer became available I applied and was offered the position to work directly with Bill's materials.

Peter provided the museum with all of Douglas' scripts, production materials, and various other paperwork and items from Bill's life and career. When we received the material it had already been placed in a rough order by Peter, usually in regards to the production they were a part of or from a general time period in Bill's life. The vast majority of the materials were from the development and production of Comrades, and with these materials you can see the (often chaotic) path a film takes on the way to completion.

Our archive uses the hierarchal database, CALM,  and I found the easiest way to organize the materials was to use Douglas' filmography as the base structure and build the archive within the confines of his work. Along with series regarding Comrades and the Bill Douglas Trilogy, I widened the scope to include his papers from his early and later unrealized work, his time at the London Film School, his teaching career and his working correspondence. Using this structure I was able to provide an in-depth look at the production of film using the Comrades section within the further scope of Douglas' body of work, as well as illuminating Bill's attitude toward his craft.

As I delved into the materials we had obtained, some items stood out as invaluable resources for researchers. The archive contains three boxes of 35 mm offcuts from 'Comrades' which have been catalogued and labelled for ease of use. The reels include deleted scenes, behind-the-scenes footage and the numerous optical effects used in the film. These effects proved to be some of the most difficult to capture, as I learned from Douglas' personal correspondence.

The scripts the archive holds provide much insight as to why producers were so wary of Douglas' films -- they are written in a lyrical prose, without stage directions or shots. This stylistic screenplay, along with his refusal to write treatments or compromise the integrity of his tightly intertwined narratives, proved to be too experimental or even confusing for most producers. This resistance to the director's style is seen in Bill's correspondence and journal entries during Ismail Merchant's short tenure as the producer of Comrades. The archive houses multiple drafts and a full storyboard of Comrades, providing an excellent resource for studying Bill's auteur filmmaking and the problems that arose from it. 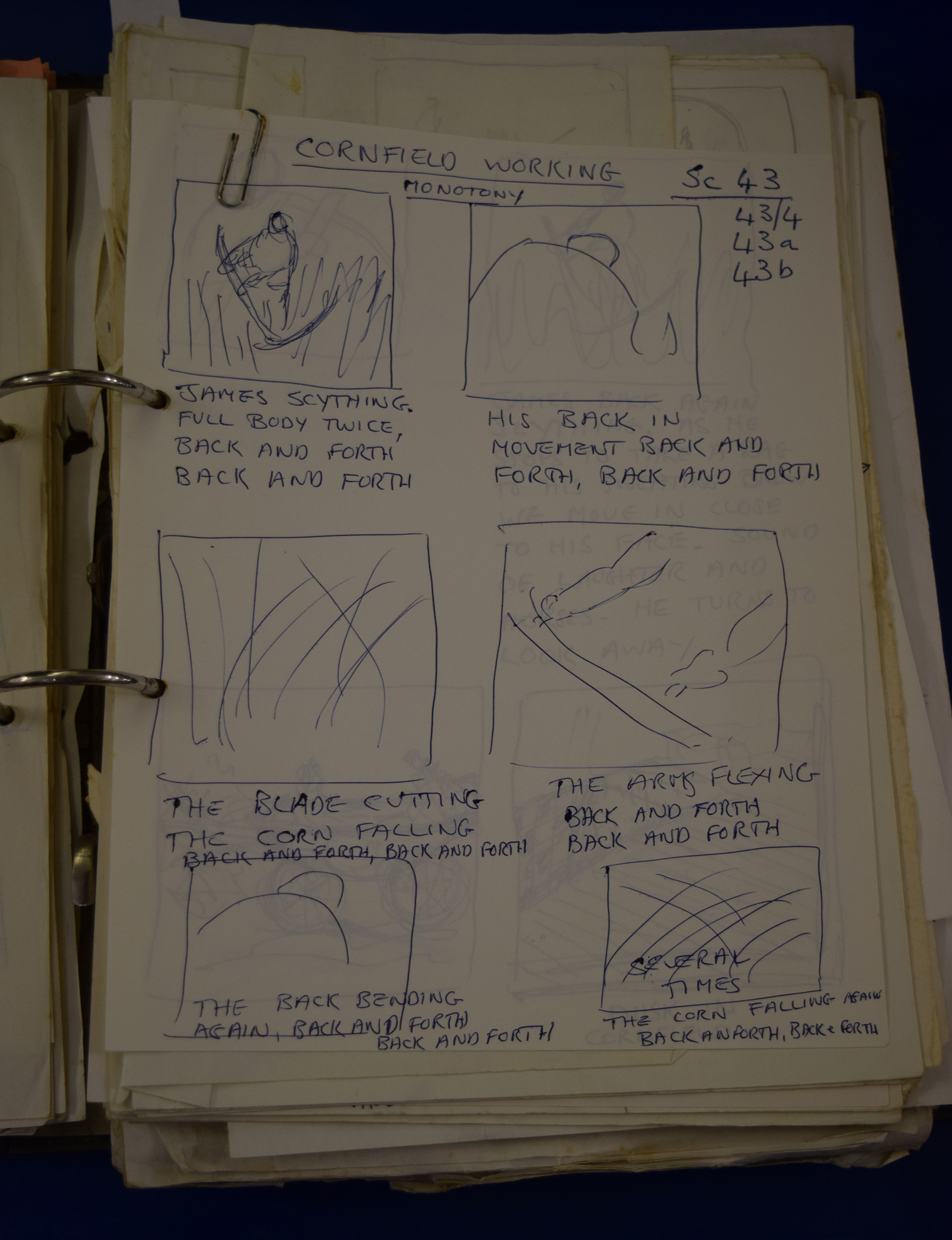 Also included in the correspondence are memos and letters from production heads Mamoun Hassan, Jeremy Issacs, David Rose and Simon Relph, broadening the scope of the collection beyond the artistic and directorial positions in film production. The archive materials tell us that Mamoun Hassan found Douglas' script 'Jamie' amid a pile of possible projects for the BFI and immediately realized he had something completely different on his hands. He managed to convince the BFI to fund all three of Douglas' autobiographical films. Jeremy Isaacs at Channel 4 awarded Comrades the largest contribution the organization had provided to date for any feature film.  The Trilogy went on to achieve honours and awards at film festivals around the world. Comrades had mostly positive reviews but its length and the political environment of the time meant that it had a troubled release history until its recent DVD release and rediscovery by contemporary audiences.

Comrades is often overshadowed by the acclaim that the Bill Douglas Trilogy received from both the public and the film industry. However, Douglas' epic masterpiece regarding the plight of the Tolpuddle Martyrs shows Douglas' development as a seasoned director after his breakout autobiographical trilogy. To make his epic, Douglas was forced to endure eight years of waiting, false starts and financial difficulties. However, he was able to overcome these odds and create a visual masterpiece, wholly original in scope and content.

Several other donors have also contributed to the archive, creating a range of materials regarding the day-to-day aspects of making a film. As well as donating the material created by Bill, Peter Jewell acted as script editor and researcher for Comrades and has provided numerous script versions and the research materials that he assembled to understand the world of the Tolpuddle Martyrs.  Penny Eyles, Comrades continuity supervisor, provided the continuity binders for the film – each containing photographs, notes and scene demarcations for the daily shooting. This is an invaluable resource for those wanting a close look at the intricacies of film production. Production designer Michael Pickwoad and editor Mick Audsley donated materials regarding their roles in the film's production as well. These items and the conclusions that can be drawn from them are just a few examples of the importance and usefulness contained in the archive's 38 boxes. 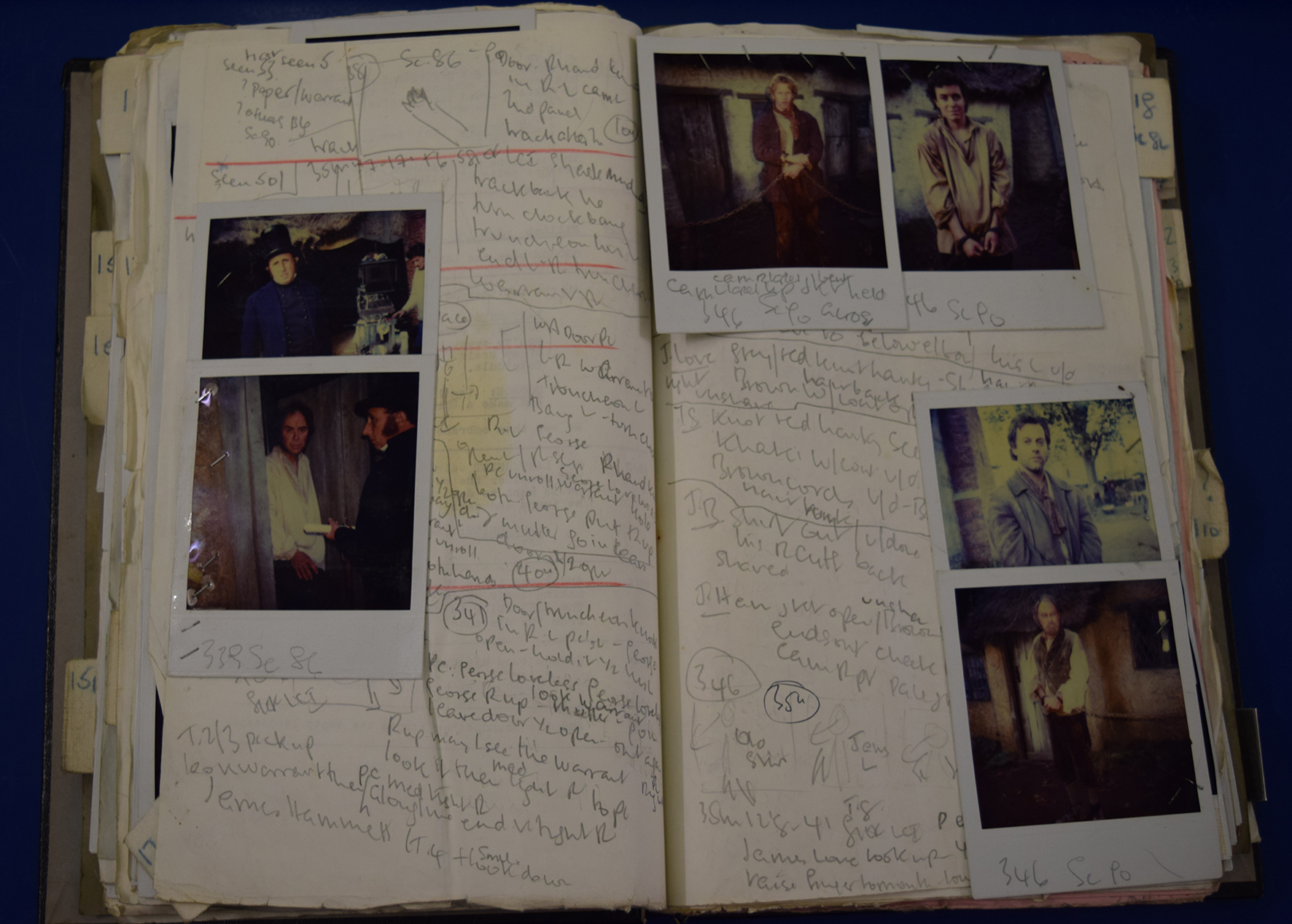 Bill Douglas' legacy was, until recently, often overlooked by critical analysis. Douglas is treated as an anomaly. Though aligned with the British art cinema movement alongside British directors such as Greenaway, Loach and Anderson, Douglas was never fully integrated into the canon with them. Douglas had such a truly unique vision that even among the great British directors of the 1970s and 1980s, he stood apart. The cause of this can partially be attributed to the volume of the director's work. With only four movies to his name, Douglas' filmography was never able to fully develop or penetrate British culture as others were. His small number of completed films, however, reflects the problems within British film industry of the time.

As I went through Douglas' work -- in the form of letters, journals and scripts that never came to fruition – I realized that Douglas' career was terribly stifled by the film industry in this period. His Trilogy was denied funding by Films of Scotland's production board due to its "backward-looking" nature, Comrades took eight years to be produced, and Douglas had two completed scripts waiting for production at the time of his death. Both the scripts, Confessions of a Justified Sinner and Flying Horse, had been picked up by production companies but Bill died before funding could be secured and shooting could begin. It is with regret that many in the film industry speak of Douglas. In On Stony Ground, a documentary produced a year after the director's death and held in the archive, many speak out against the hardships he experienced in trying to get his brilliantly unique films made, including Terence Davies, Lindsay Anderson and Jeremy Issacs.

However, since the international re-releases of both the Bill Douglas Trilogy and Comrades on DVD and Blu-Ray by the BFI, Bill's work has been gaining recognition and acclaim surpassing that at the time of the original release. The Trilogy, and subsequently Comrades,  has had a full revival in France, with a wide-ranging cinema release accompanying the DVD's reissue, and in Mexico the entire Bill Douglas filmography was featured in the Morelia National Film Festival, in a season curated by renowned French filmmaker Nicolas Phillibert . This resurgence of Bill's work makes his papers a timely addition to the academic resources available to scholars of British film history, art cinema and all those interested in an i9conic, uncompromisingly artist and his vision of the world.

I hope that with the availability of these papers,  researchers, students and film fans alike will have access to Bill Douglas beyond his films. The archive provides valuable insight into the director's creative process as well as the film industry and production stages and can give Bill Douglas the acclaim he deserves. 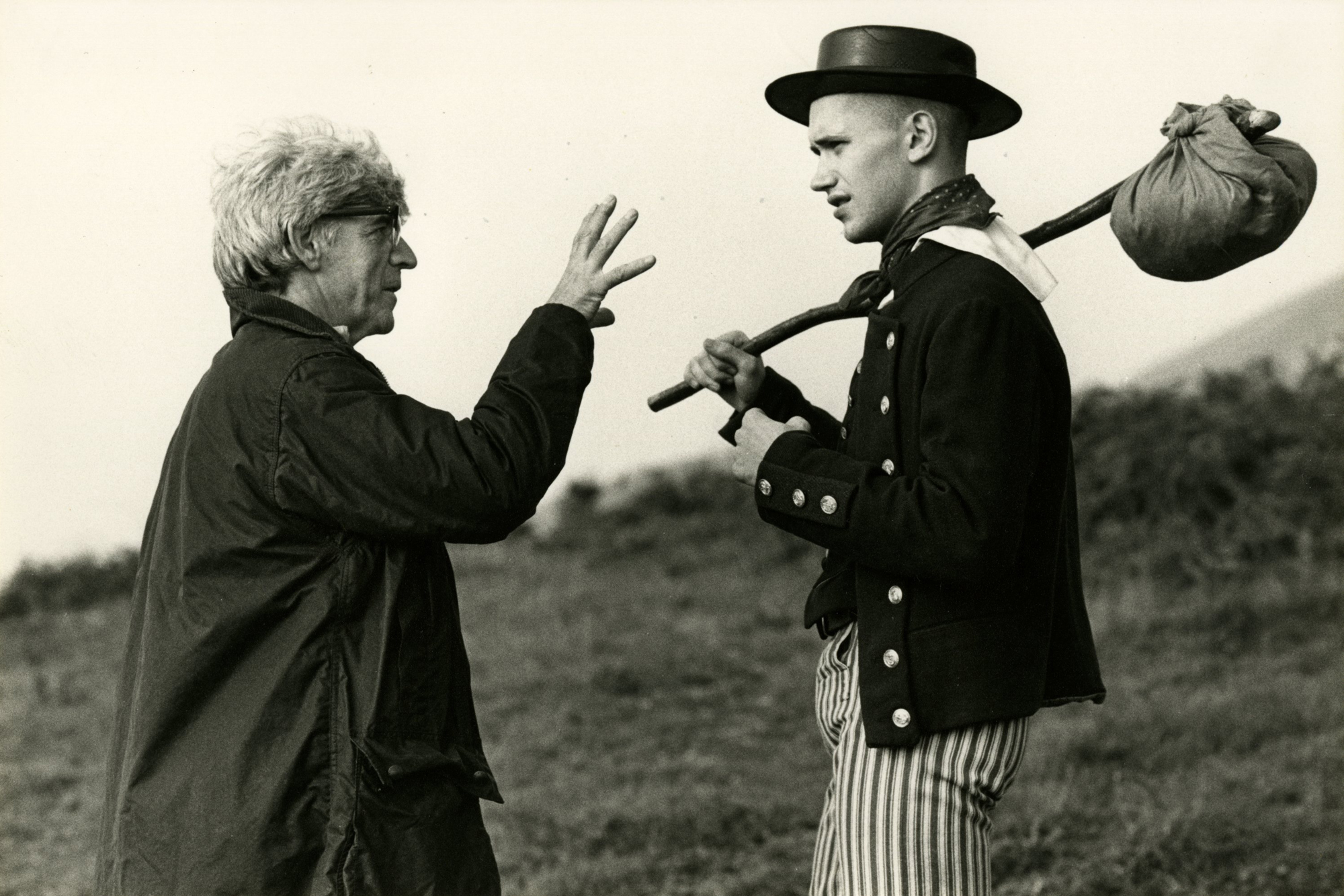 We were very sad to hear of the death late last year after a long illness of our friend and former colleague, Professor Steve Neale. Steve was one of the most important film historians over the last fifty years in ...