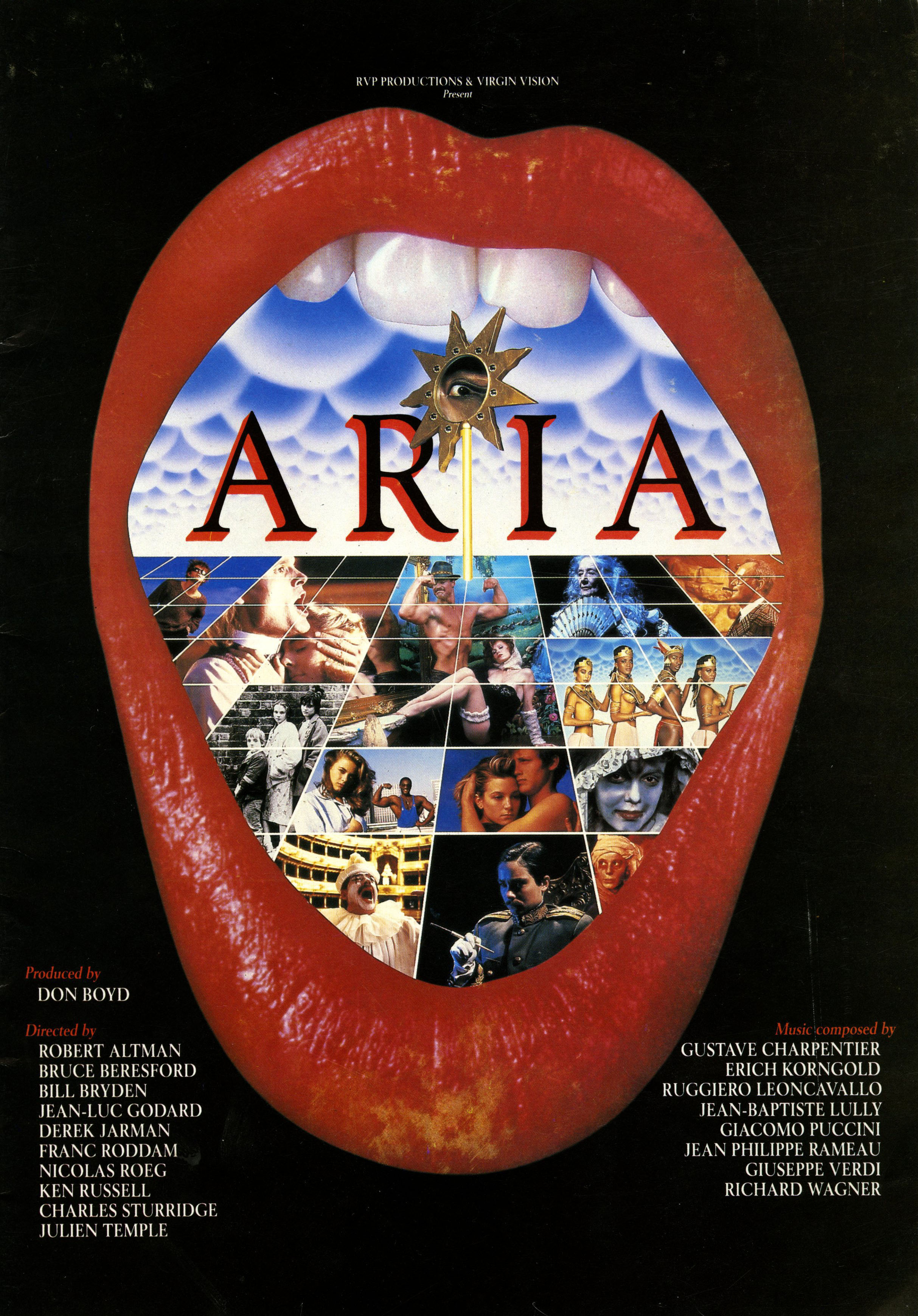 The Bill Douglas Cinema Museum holds Don Boyd's archive, which includes extensive material on his film Aria. Don produced the film, which premiered at the Cannes festival in 1987, and is comprised of ten segments each inspired by an operatic aria taken from the RCA/Columbia's recording catalogue. The sections range from four to fourteen minutes long, and are directed by Robert Altman, Bruce Beresford, Bill Bryden, Jean-Luc Godard, Derek Jarman, Franc Roddam, Nic Roeg, Ken Russell, Charles Sturridge and Julien Temple. The film continues to be popular today.

This website has been created by students as part of the Grand Challenges Project. The following interview with Don Boyd on his experiences of producing Aria was written, shot and edited by students.

Don Boyd donated various documents from his personal collection to the Museum on the making of Aria. These give insight into every stage of the production of the film. Held in the Bill Douglas Cinema Museum's archives, they are available for consultation by researchers. We have chosen to digitise a selection of those we found most interesting. 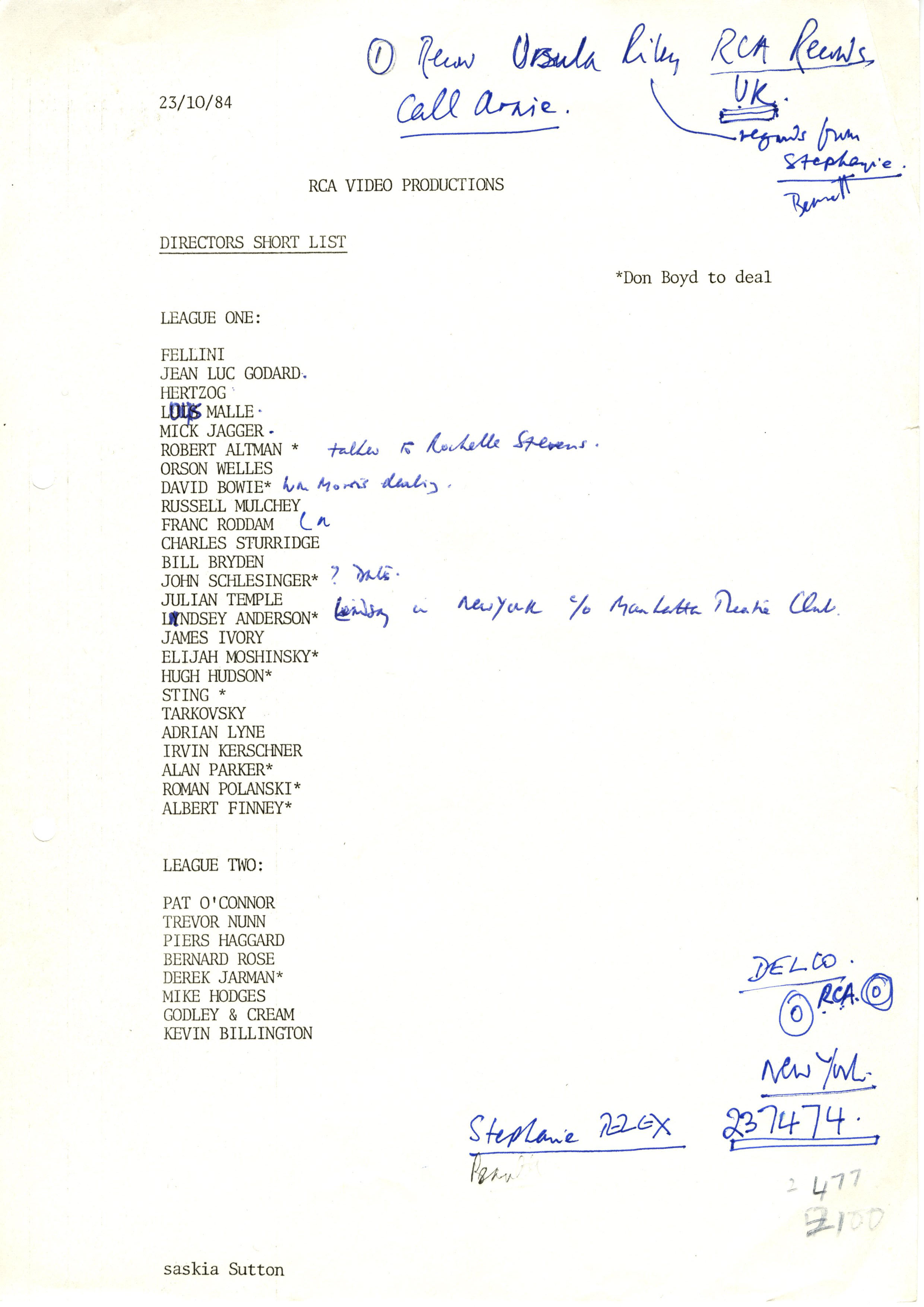 One such item is this list of potential directors. This is a revised list sent by RCA to Don, made from his original suggestions. Derek Jarman appears on their League Two list but Don was determined to include Jarman, who he had previously worked with on The Tempest (1979). Although not listed, Woody Allen was also considered but was not available. As you can see, there are some quite surprising well-known names from pop culture who were not involved in the final film. Almost all the directors Don contacted showed interest in the making of the film.

This is a letter from Don Boyd expressing his interest in having Orson Welles direct a segment and explaining his initial concept. Similar letters were sent to all of the potential directors. 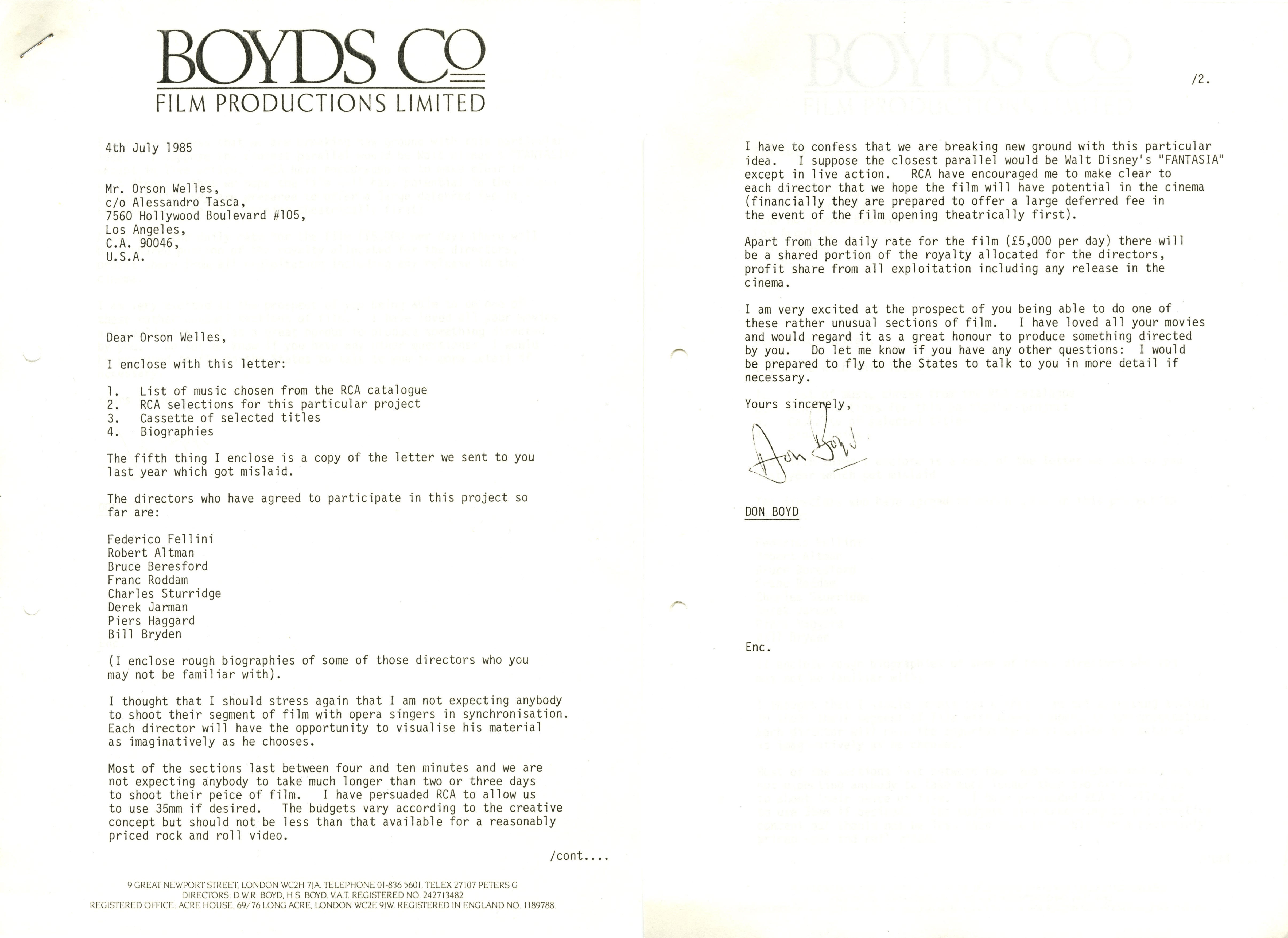 Director Federico Fellini was keen to take part in the project, and so Don Boyd met him in Rome to discuss his involvement. Don took detailed notes of this meeting, the first page of which can be seen here.. In his conclusion he wrote "We got on well. He agreed to be involved. He wants to be sure of the parameters and wants me to specify these in order that he can come up with something which fits our concept. If we provide the correct amount of cash he will come up with something extraordinary. I adored meeting him: no disappointments. I cannot wait ----------- (his secretary made it clear that he was very serious and was a man of his word). He also would like to arrange the shooting period around his schedule." 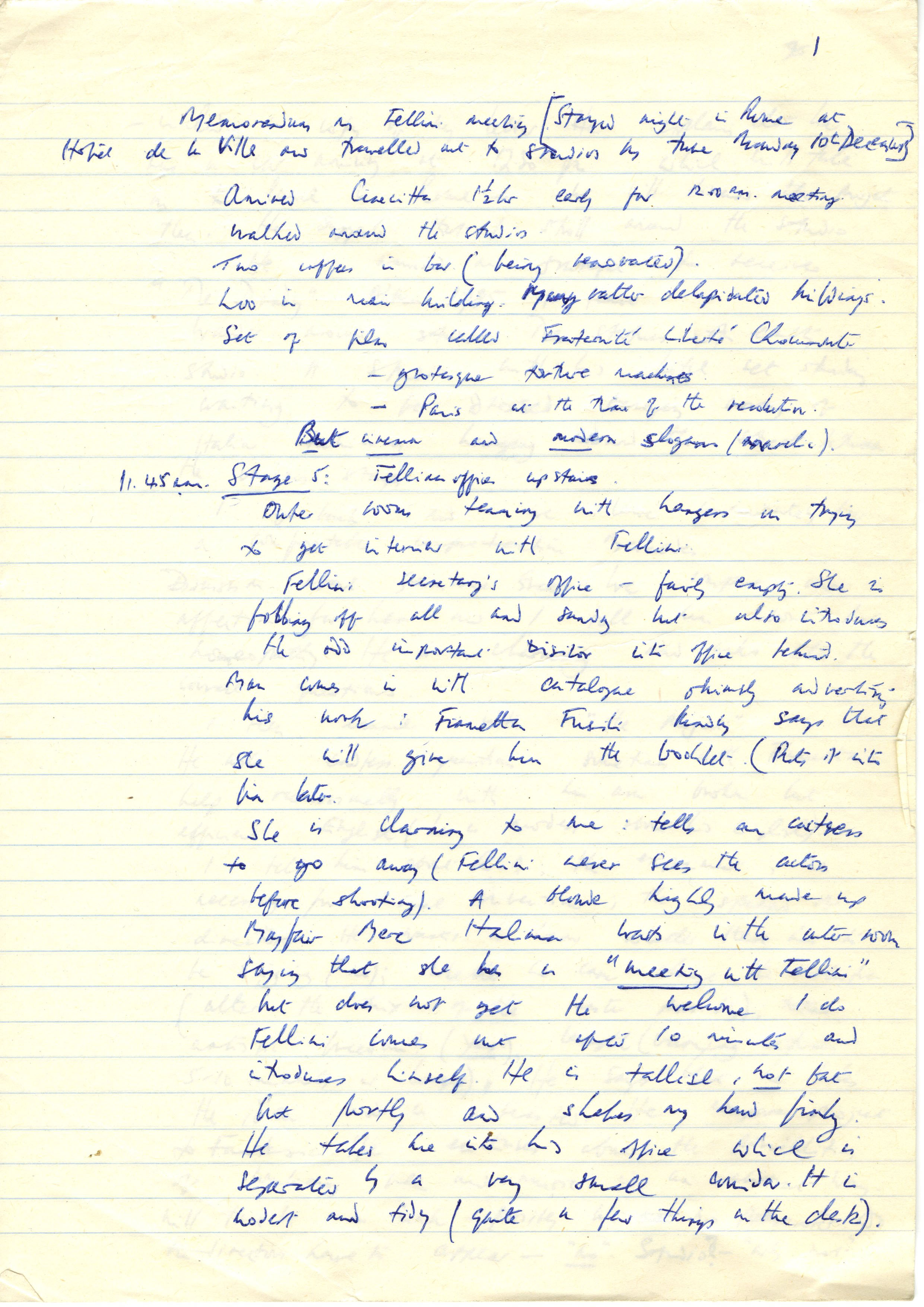 Fellini unfortunately was unable to participate in the film due to illness and scheduling issues. 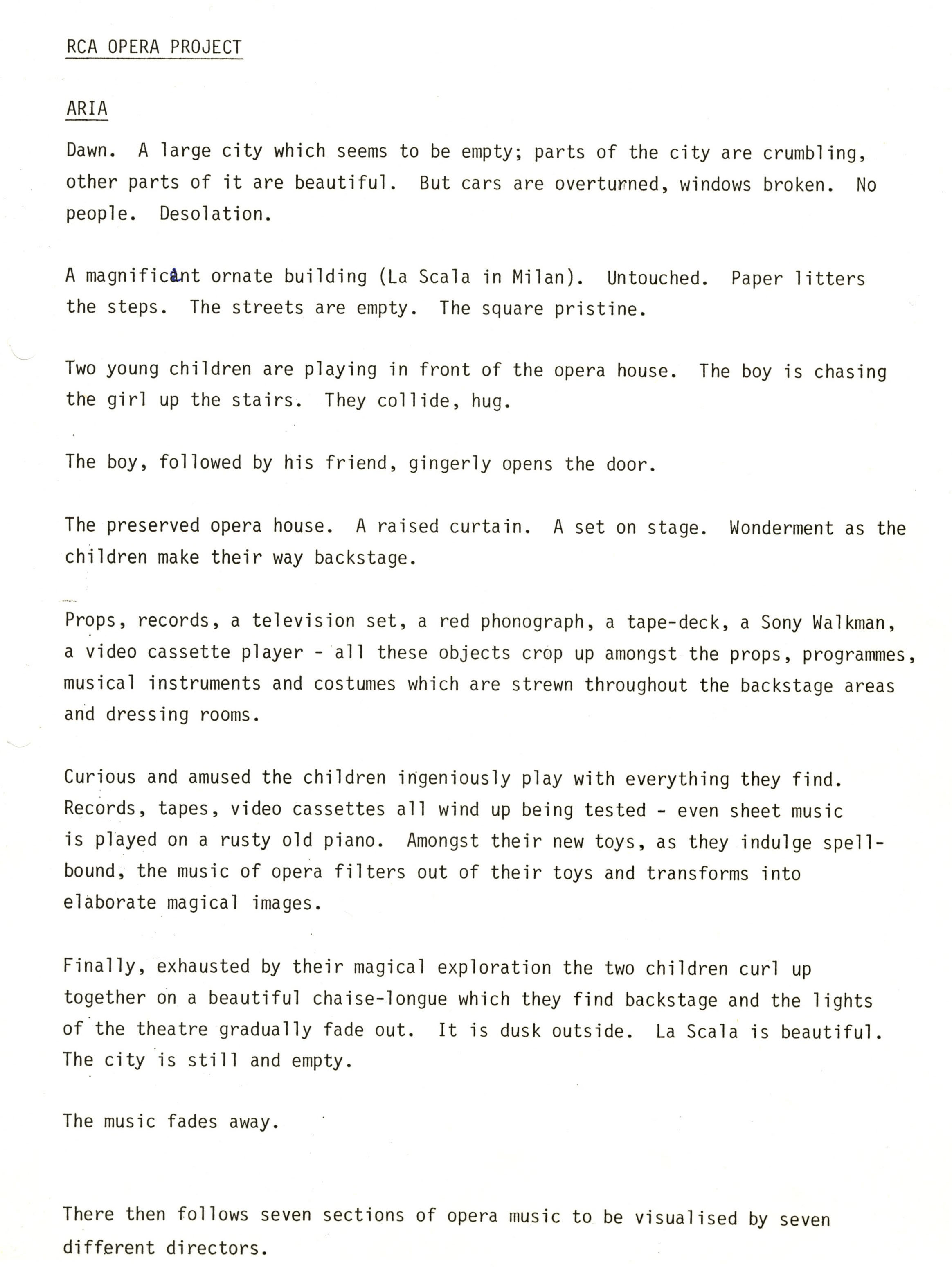 Notably, this prologue, written by Don Boyd, does not make it into the final film. Regardless, this is still an interesting artefact. From the beginning of the work on Aria, Don Boyd drew parallels between his film and Disney's Fantasia (1940). In this original draft, which focuses on the magical elements of Opera, you can see the similarities. The film begins instead with Bill Bryden's concept. 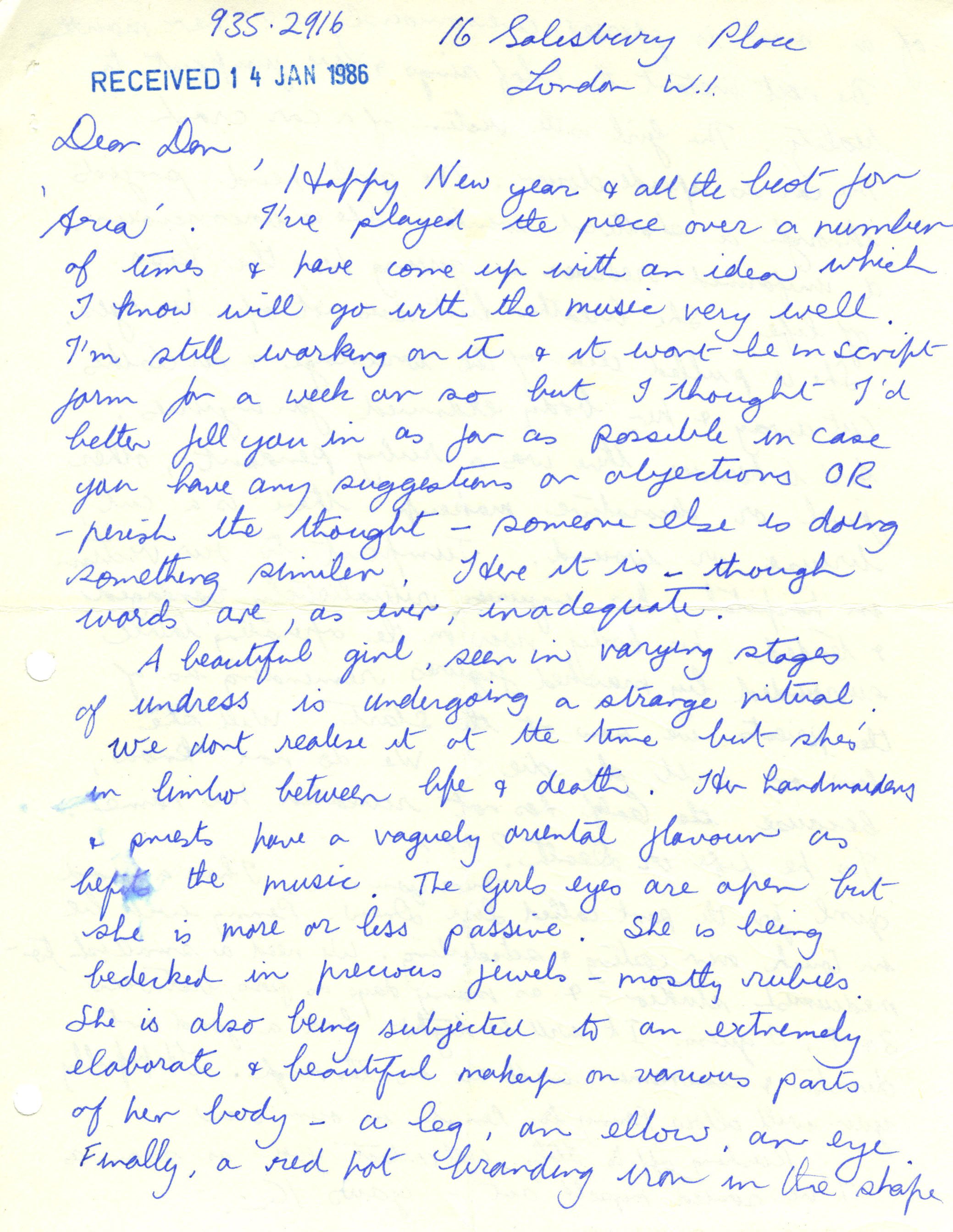 This handwritten letter from Ken Russell dictates his original concept for his segment before he began writing the script. As you can see, there are remarkably few changes from the original idea to the final film. The Bill Douglas Cinema Museum also holds the original concepts for other sections, some which have changed more than others. 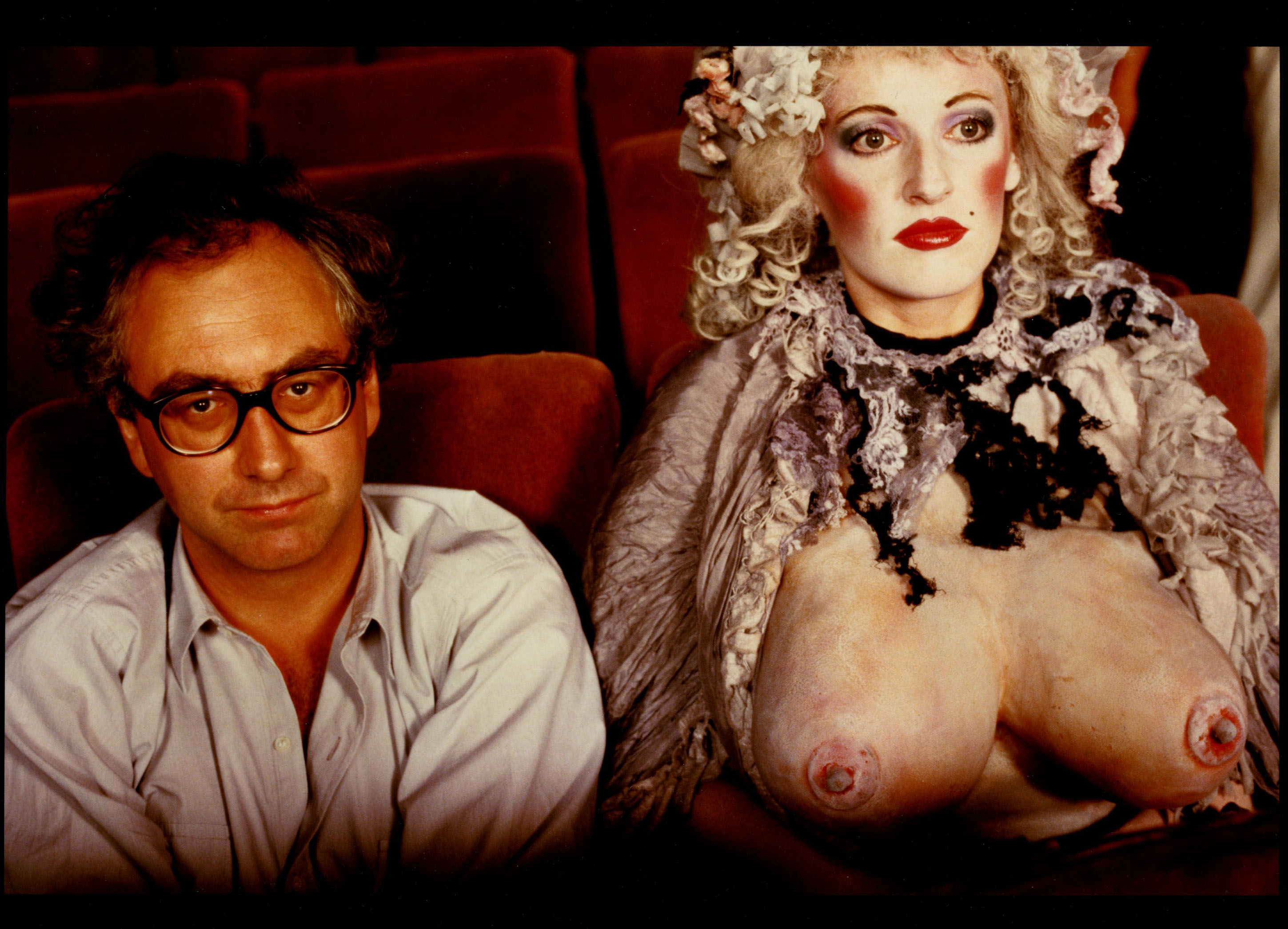 Robert Altman's section was potentially going to be the linking narrative for the film; an audience of grotesque asylum inmates would be watching the other arias (the photograph below by David Bailey shows Don Boyd with one of these characters). The idea of using this as a connecting element was discarded in favour of Bill Bryden's sequences starring John Hurt, but it remains as one of the segments, accompanying an aria by Rameau. 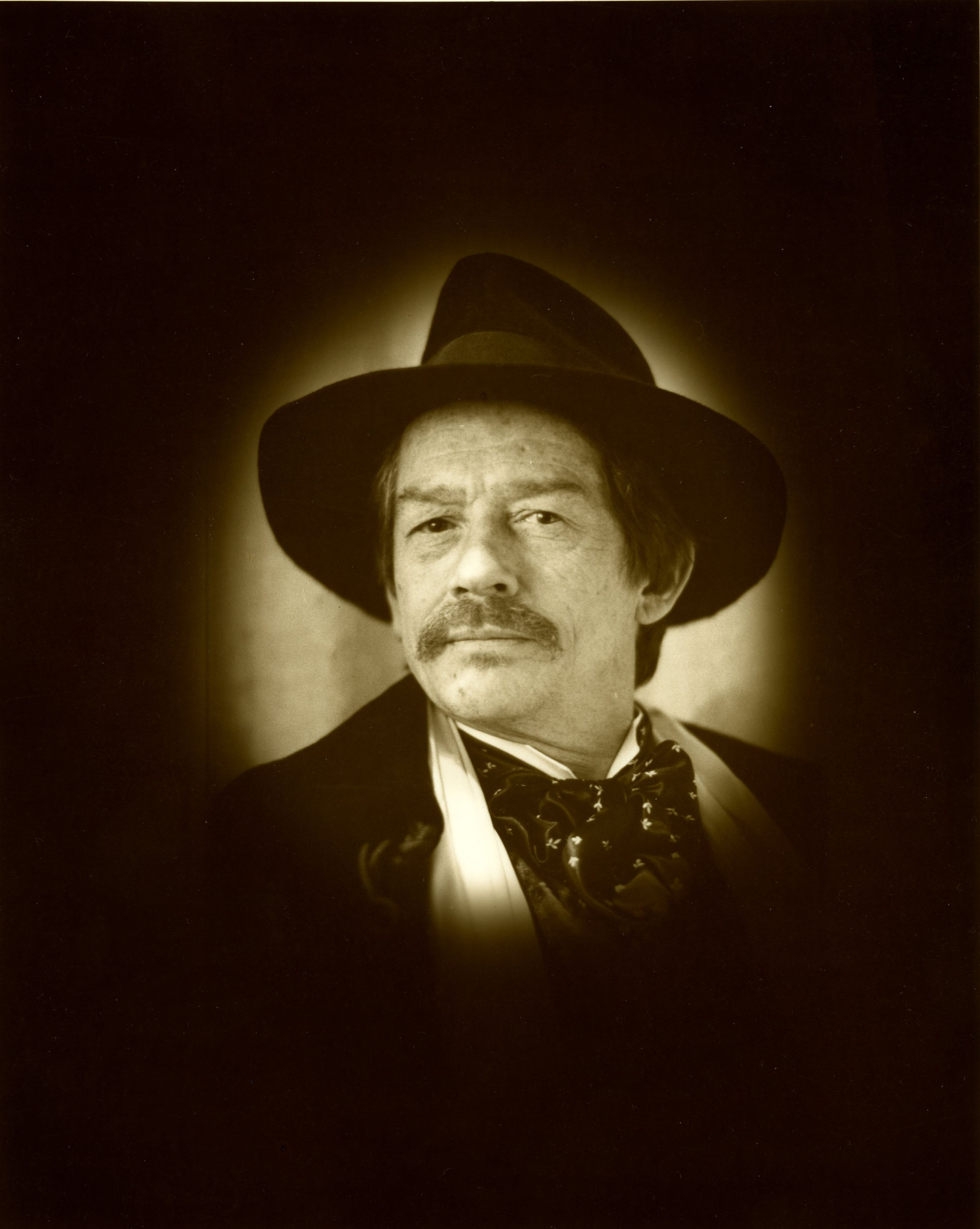 This publicity photo depicts John Hurt, partly in costume but not quite how he appears in the film. He had previously worked with Don Boyd on the film East of Elephant Rock, and Don knew he was a strong enough actor to take on this difficult role. John Hurt undertook extensive training to learn how to replicate opera singing. 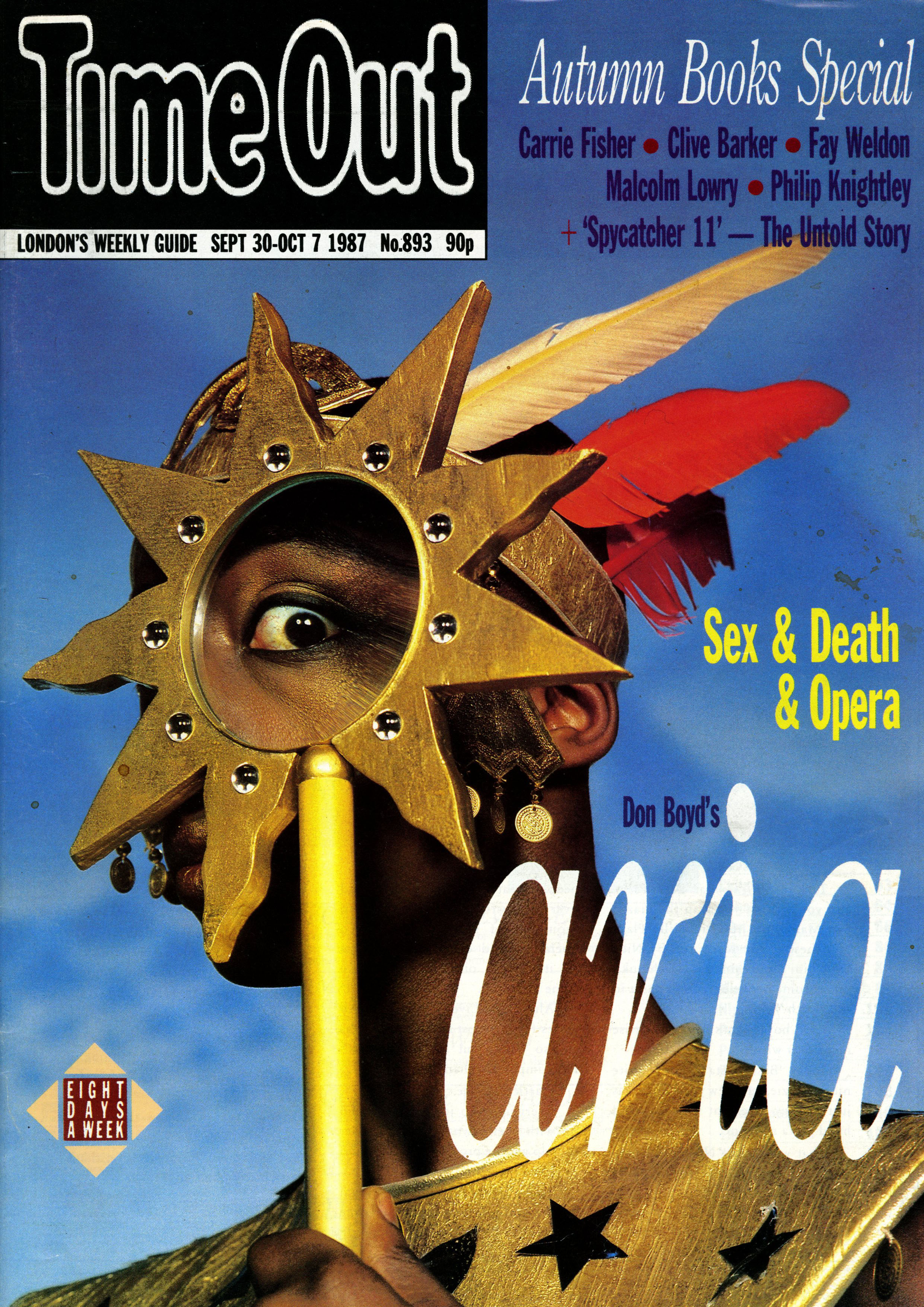 The film was a success, reaching number 10 in the London Top 10 in its opening week. While it did receive mixed reviews from critics at the time, it continues to be popular more than 25 years later.

You can see the whole of Aria (18 certificate content) on Don's website Hibrow at http://www.hibrow.tv/player/?em=FiczM2ZzraT4AGWVtlzjFhzfCz0HlJgG. All images on this page are copyright Don Boyd. Thanks very much to Don for his help with this project. 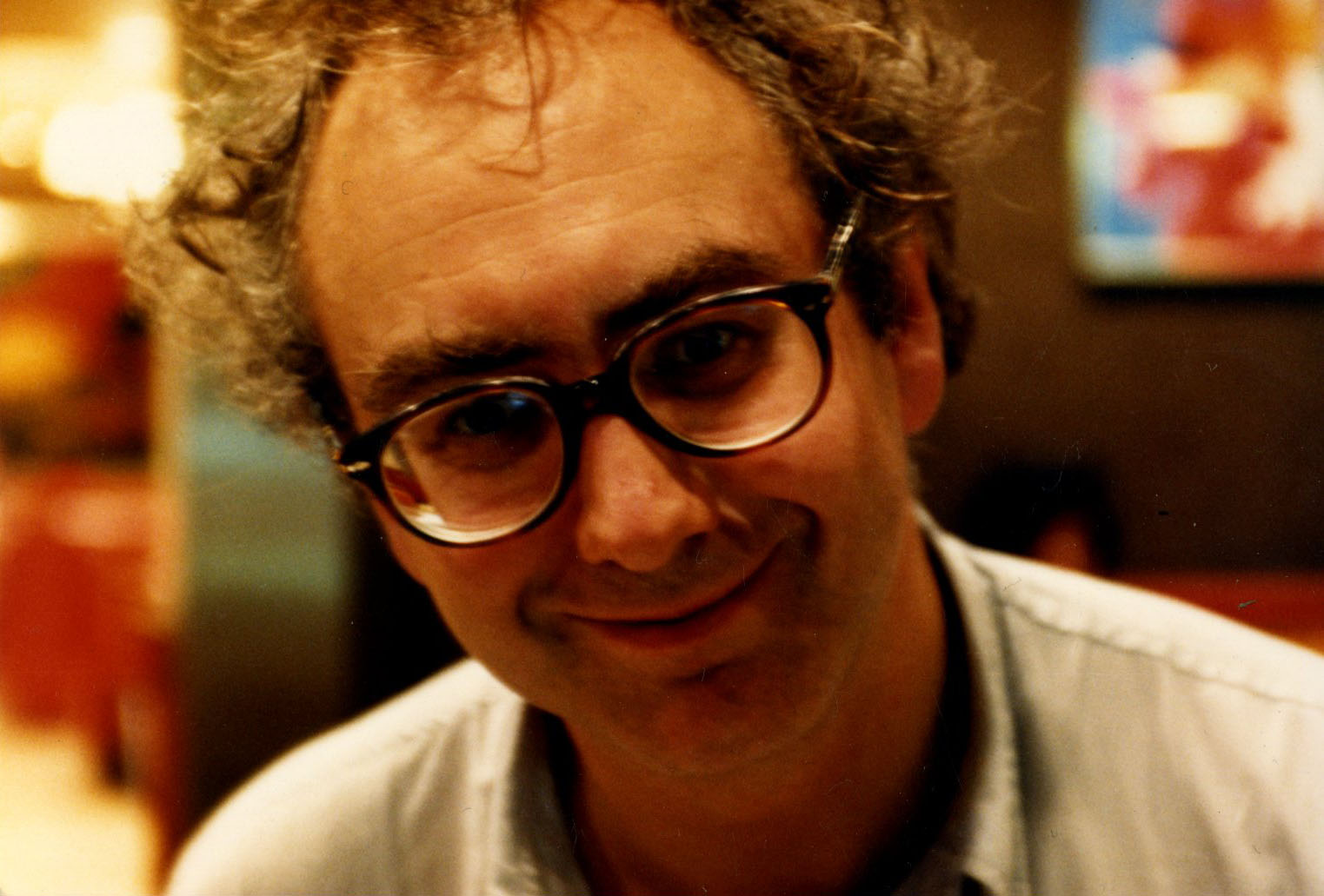 This page and the film were produced by students taking part in the Digital Futures Challenge as part of the University of Exeter's Grand Challenges 2014.

Liana and Torran interviewed Don in the film and devised this page with Nadia. Adam and Nadia led the filming and George and Janet edited the footage.