When the first photographs were taken, in the middle of the nineteenth century, no-one could have imagined that this laborious process would eventually lead to recording movement, and the creation of moving pictures. In this section you can find out about some important figures involved in the development of photography to the moving image. 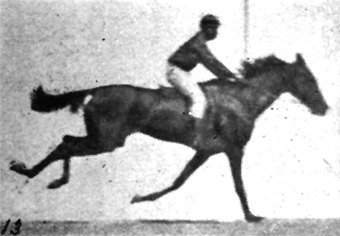 an experiment to show what the motion of a galloping horse looked like when captured on film - in particular, that there was one point when all of the horse's feet were off the ground at the same time.

Muybridge was also keen to attempt to show his sequence photographs as a moving image projected by a magic lantern. He developed a machine known as the zoopraxiscope - it projected a series of images from a glass disc, which turned past the lens of the projector, and gave the impression of a moving picture. 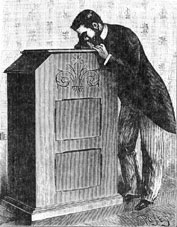 Thomas Edison was the first person successfully to demonstrate moving pictures to the public. Working with William Kennedy Laurie Dickson, Edison developed a camera which used celluloid film. This was called the kinetograph and it used rolls of film about 35mm wide. These film strips carried rows of holes down the sides to allow the film to be pulled through the camera at an even rate. These still appear on both ciné-film and films for use in ordinary cameras.

The instrument for viewing the films was called a kinetoscope. You can see from the picture that it could only be used by one person at a time, looking through the viewing piece at the top of the box. The film ran backwards and forwards round a series of pulleys, and was held as a continuous loop, so that it could be watched over and over again without rewinding.

After seeing Edison's kinetoscope in Paris, Auguste and Louis Lumière decided to design a camera of their own which they called a cinématographe. The machine was in fact not only a camera but could be used, together with a magic lantern, to project the films which the brothers had taken.

The first film to be shown to an audience was an image of workers leaving a factory in Lyon. This showing was also the first time that an audience had seen moving pictures projected onto a screen, since Edison's kinetoscope used a peep-show viewer rather than a projected image.

The first public screening of one of the Lumières' films was given on 28 December 1895 in Paris. This date is often taken to mark the birth of the cinema.