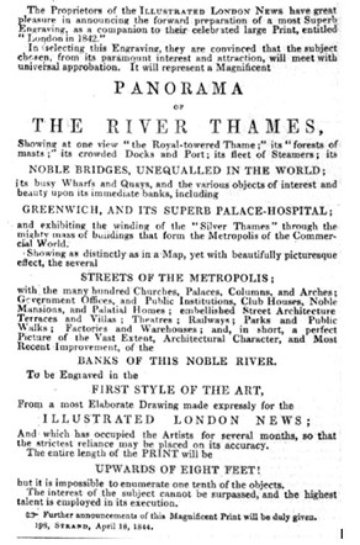 In the latest blog by one of the researchers awarded a stipend by the museum, Dr Tiago de Luca from the University of Warwick looks at how moving and immersive images were used at the end of the nineteenth century to try and make sense of the world.

Thanks to globalisation and our global environmental crisis, the Earth is now a ubiquitous trope in our audiovisual landscape: from a database like Google Earth through to countless ecological documentaries. As we begin to grasp the consequences of the so-called age of the Anthropocene, according to which human impact on the planet has reached the status of a geological force, the whole world has become an inescapable feature and figure of our time. Such planetary awareness is often harked back to the first images of the Earth taken during the Apollo missions in the late 1960s/early 1970s, which allegedly made humans categorically more conscious of the world as a totality.

Without denying the force of such images in shaping how we conceive and perceive the Earth, my research project suggests that we must look further back in time if we are to provide a historically sensitive account of whole-world visuality. In particular, it posits the second part of the nineteenth century (and beyond) as a watershed in terms of how grappling with the world as a – and in its – totality was deeply built into the media culture of the time, ranging from panoramas and world exhibitions through to collectible stereocards. Of course, these practices, attractions and devices never provided a full image of the planet. Yet they were implicated within a globalist culture that shifted the way humans imagined themselves in relation to the world. This shift was both part and parcel of wider social transformations, including the rise of the tourism industry, new modes of transportation and, not least, colonialism. The new regimes of visibility and visuality set forth by these transformations are often framed within a ‘modernity’ narrative. My project proposes that it is time to acknowledge and highlight that globalism and globalisation were intrinsic features of such modernity, and that, as conceptual categories, they are able to shed new light on the media culture of the time.

The precious materials relating to pre- and early-cinema history housed in the Bill Douglas Cinema Museum have provided me with substantial and invaluable evidence that the whole world was as ubiquitous then as it is now, if only for quite different reasons. For, if the planet is now couched within a rhetoric of extinction and disappearance, in the late nineteenth century it was entangled in notions of conquest and appropriation. These ideas are neatly summarised in one of the posters from Chas W. Poole’s New Myriorama and Trips Abroad (EXE BD 17876), held at the Museum. Here, in the featured image for this blog, a centralised globe is ‘framed’ by 6 human figures, each of which representing a continent. Scanned clock-wise (and with the advantage of hindsight), it is almost impossible not to read the human diversity and planetary scale conjured by this image in terms of the uneven power relations between the European ‘gentlemen’ on the far left, and the remaining indigenous and exoticised cultures personified in the poster. Nor, for that matter, is it a mere detail that the African continent is given prominence both in the globe at the centre and in the depicted countries surrounding it.

Established in 1837 as a moving panorama company by the showmen George and Charles Poole, and subsequently managed by several of the family successors, the Myriorama explicitly capitalised on the idea of global travel as a way of acquiring knowledge for those without the means. One programme held at the Museum entitled ‘Sights of the World’, for example, recognises that ‘there is no more easy or agreeable way of adding to our store of knowledge than travel’, while conceding that ‘the desire to see the foreign parts is not always accompanied with the means of gratifying it’ (EXE BD 17869). 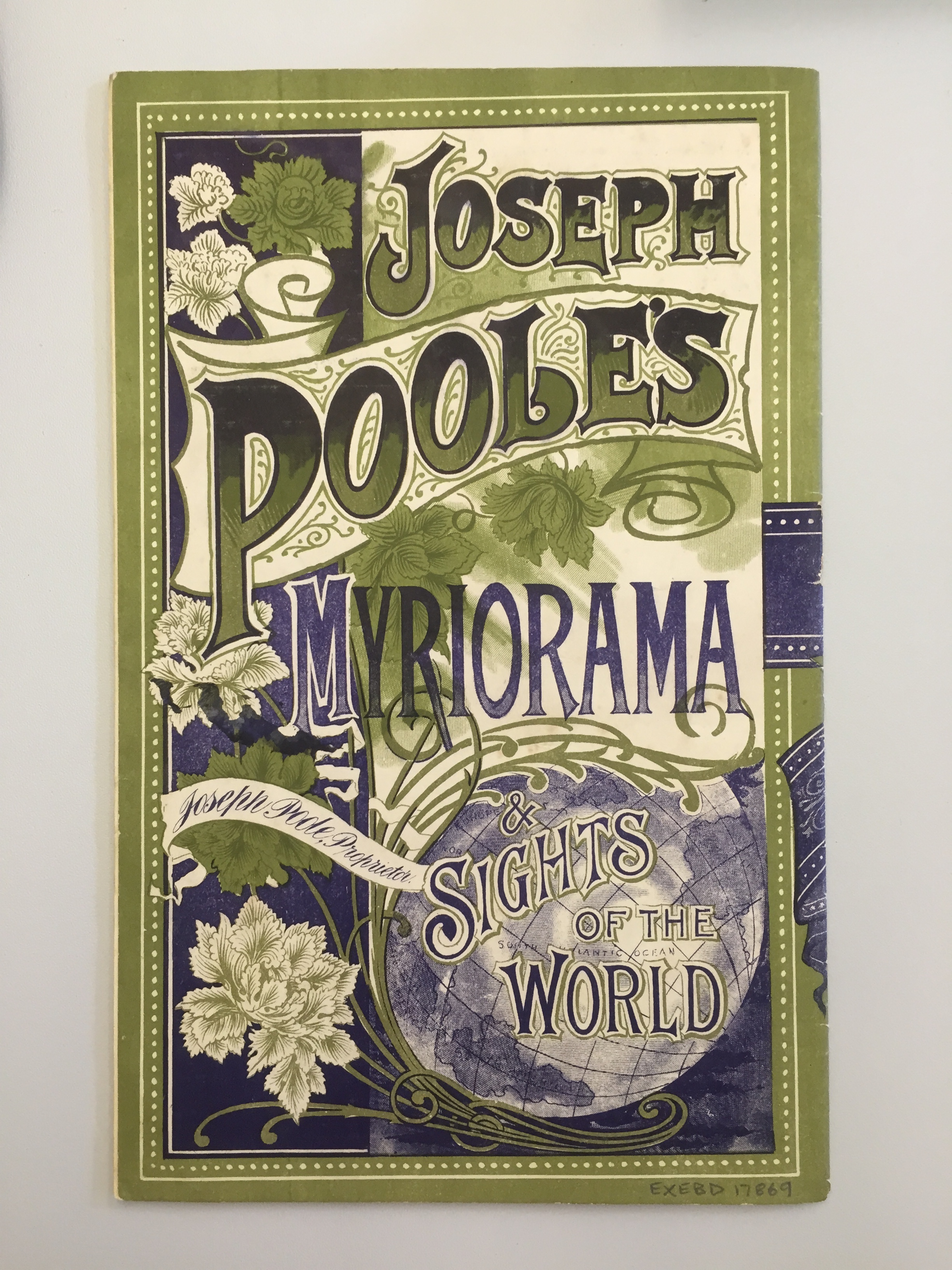 In England, such was the popularity of the moving panorama and so identified with the idea of an inventory of the world they became, that in one booklet commemorating the centenary of the Poole’s ‘Myriorama’, dating from 1937, the panorama is retrospectively defined in the following terms: ‘And what was a panorama? It was a series of pictures, usually entitled ‘A Trip Round the World’, starting with a picture of London and finishing in England’ (EXE BD 33966). This is an interesting definition, as it not only contravenes standard definitions of the panorama as a 360-degree large-scale reproduction of a single landscape or cityscape, but also shows how the promise of a global perspective was inseparable from a colonial discourse that purported England to be the centre of the world. 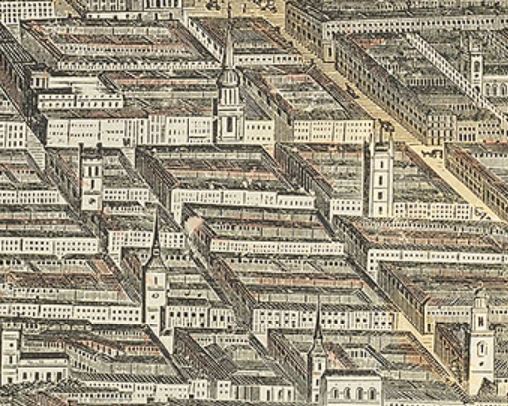 The emergence of cinema is situated within this visual and discursive milieu, from which it borrows many functions, themes and tropes. The figure of the globe and a rhetoric of world knowledge, both of which freighted with colonial implications, are swiftly adopted in the promotional discourses of the nascent film industry. Take the Walturdaw Bioscopes, a company specialised in the hiring of films, technical equipment, screening rooms and related paraphernalia. These included posters for film exhibitors, many of which featured global symbols and conceptions. The Museum not only holds one of the company’s catalogues dating from 1915, in which these posters are listed together with their dimensions and prices, but also some of these posters themselves. An especially telling one, which resonates with the Myriorama poster mentioned above, similarly features a globe at the centre and surrounding far-off locations (EXE BD 4615), with the British and American flags prominently hanging above it all. 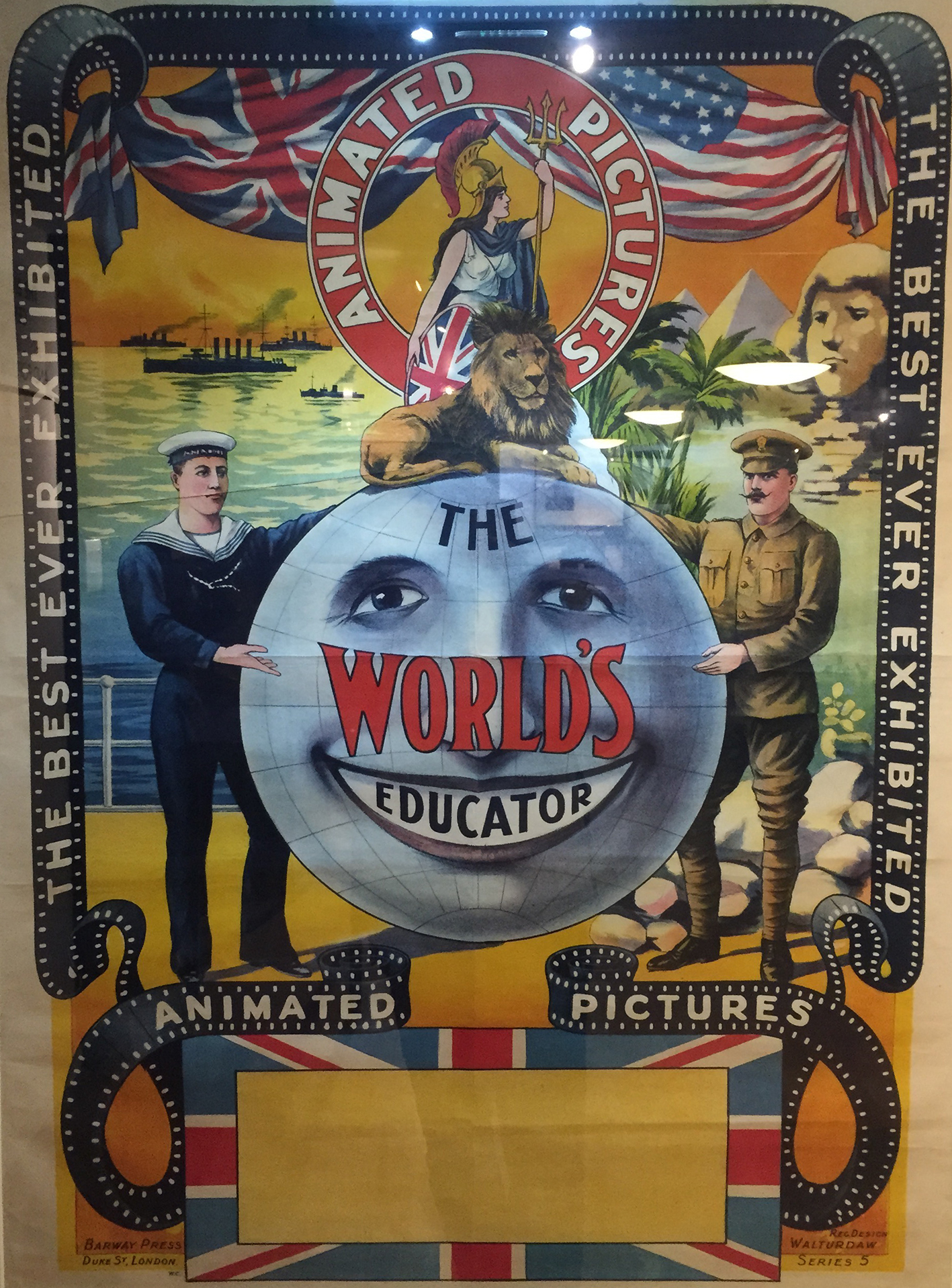 Here, moreover, the figure of the globe is not only carried on each side by two male human figures that clearly symbolise overseas conquest (a sailor and a soldier), but the globe itself is merged with the figure of a smiling human face, on which the expression ‘the world’s educator’ is stamped.

As all of these materials attest, then, if the cinema and the media culture within which it emerges could not exactly offer an image of the Earth, they nonetheless actively resituated the human within an expanding world, shaping a new consciousness of the planet as connected with an expansion of the field of the visible, itself the result of territorial expansion. In these materials, the figure of the human – often white and male – is unambiguously depicted in a position of mastery over a planet that awaits to be possessed, conquered and appropriated. 120 years later, this relationship in radically more uncertain, if not downright reversed, as the Earth asserts back its own agency and control over increasingly frightened humans. These earlier examples can therefore provide us with a precious lens through which to assess the cultural significance of recent global imaginaries.

Dr Tiago de Luca is Assistant Professor in Film Studies at the University of Warwick. He is the author of Realism of the Senses in World Cinema: The Experience of Physical Reality (2014) and the editor (with Nuno Barradas Jorge) of Slow Cinema (2016). His new book project looks at the ways in which the world as a totality has been imaged and imagined in the cinema and related media.