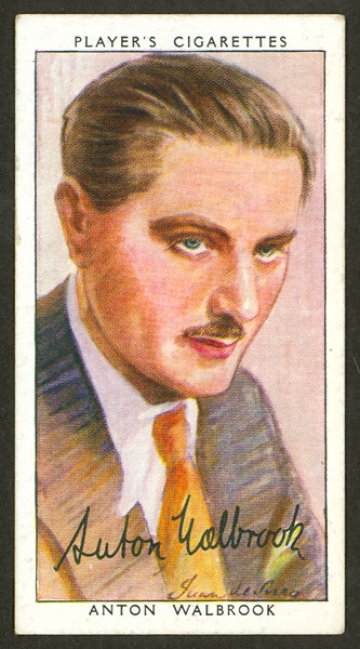 Visitors to the Bill Douglas Cinema Museum may remember the exhibition ‘Anton Walbrook – Star and Enigma’ which was held here in 2013. Curated by James Downs, then a volunteer at the BDC, this exhibition on the charismatic star of German cinema in the 1930s and British Cinema in the 1940s, included items from the museum holdings, material from James’s own collection of Walbrook memorabilia, along with original Walbrook-inspired artwork by Dashiell Silva. The exhibition grew out of research into Walbrook’s fascinating life and career, which has now resulted in the publication of the first biography of the actor, Anton Walbrook. A Life of Masks and Mirrors, written by James and published by Peter Lang. Here, James look back at how writing the biography evolved from work at the museum and has drawn upon its collections.

Although I was familiar with the name of Anton Walbrook and had seen several of his films, my interest in him deepened in 2009 when I was asked to catalogue a small box of material that had been donated to the museum by Peter Jewell. It contained an assortment of German film magazines, postcards and ephemera from the 1930s, all of it featuring the actor Adolf Wohlbrück - the name by which he was known before he moved to Hollywood in 1936. It was clear from the richness and diversity of the material – which included many magazine covers and glamorous star portraits – that Wohlbrück had been a major star in German cinema during this period. I began thinking about what it must have been like to abandon such a career and begin again in another country, with a new name and a different language. From my work at the museum I knew that the film industries in both Britain and America had benefited from the arrival of hundreds of German and Austrian émigrés during the 1920s and 1930s. The contributions made by the likes of Ernst Lubitch, Fritz Lang, Billy Wilder, Fred Zinnemann, Conrad Veidt, Emeric Pressburger, Alfred Junge, Hein Heckroth and Lilli Palmer are of course well-known, but something about Walbrook intrigued me and I was keen to learn more about his life.

It was only when I began looking for literature on Walbrook that I realised very little had been published; there was uncertainty over basic facts such as his year of birth, and many reference works simply repeated the same story, indicating that no-one was uncovering fresh material. What began as curiosity soon developed into a serious research project that would see me travelling to Austria and Germany as well as working in various archives around the UK over the next ten years. It may sound perverse, but one of the most interesting things about the research was not so much that the clarity that it brought to the facts of Walbrook’s life, but that it revealed a mass of complexities and contradictions.

From Wohlbrück to Walbrook

Adolf Anton Wilhelm Wohlbrück was born in Vienna on 19 November 1896. His father was a clown and the actor’s early exposure to circus life was a formative experience: even though he wanted to be an actor from an early age, he inherited his father’s gift for physical

comedy: in addition to his acrobatic and juggling skills, Walbrook excelled at using his body in acting, often showing great finesse and subtlety in tiny facial movements or hand gestures. He trained at drama school in Berlin under the great Max Reinhardt and made his stage debut at the Deutsches Theater in 1915 before joining the German army and going off to fight in WWI. Captured in France two years later, he spent the rest of the war in a POW camp where he organised theatre performances. After the end of the war he returned to the theatre, acquiring a growing reputation for his work in Munich (1919-26), Dresden (1926-30) and Berlin (1930-36). Although he appeared in a few films during the 1920s, silent cinema did not hold a great appeal for him, partly because there was no opportunity to use his rich, sonorous voice but also because he enjoyed the audience interaction that came from live performance. He appeared in over 200 theatre productions, ranging from the great classics of German and English literature – Goethe, Schiller, Shakespeare, Wilde and Shaw - to the more modern Expressionistic dramas being written by contemporary authors such as Wedekind, von Hofmannsthal and Brecht.

With the coming of sound, however, cinema proved hard to resist, and Wohlbrück’s move to Berlin was largely motivated by an ambition to get close to the city’s film studios. Within a few short years Wohlbrück established himself as a charismatic leading man, specialising in romantic comedies and musicals with various excursions into darker melodramas such as Der Student von Prag [The Student of Prague]. By the mid 1930s he was probably the No.1 star in German cinema, commanding high salaries and with an enthusiastic fan base that provided a commercial market for an array of promotional materials – such as cigarette cards and collectable postcards, many examples of which are held in the museum.

Fig.2 Promotional film still showing Wohlbrück and Müller in a scene from Die englische Heirat. The photograph bears the blind-stamp of the Nazi censorship office. EXEBD 55482. 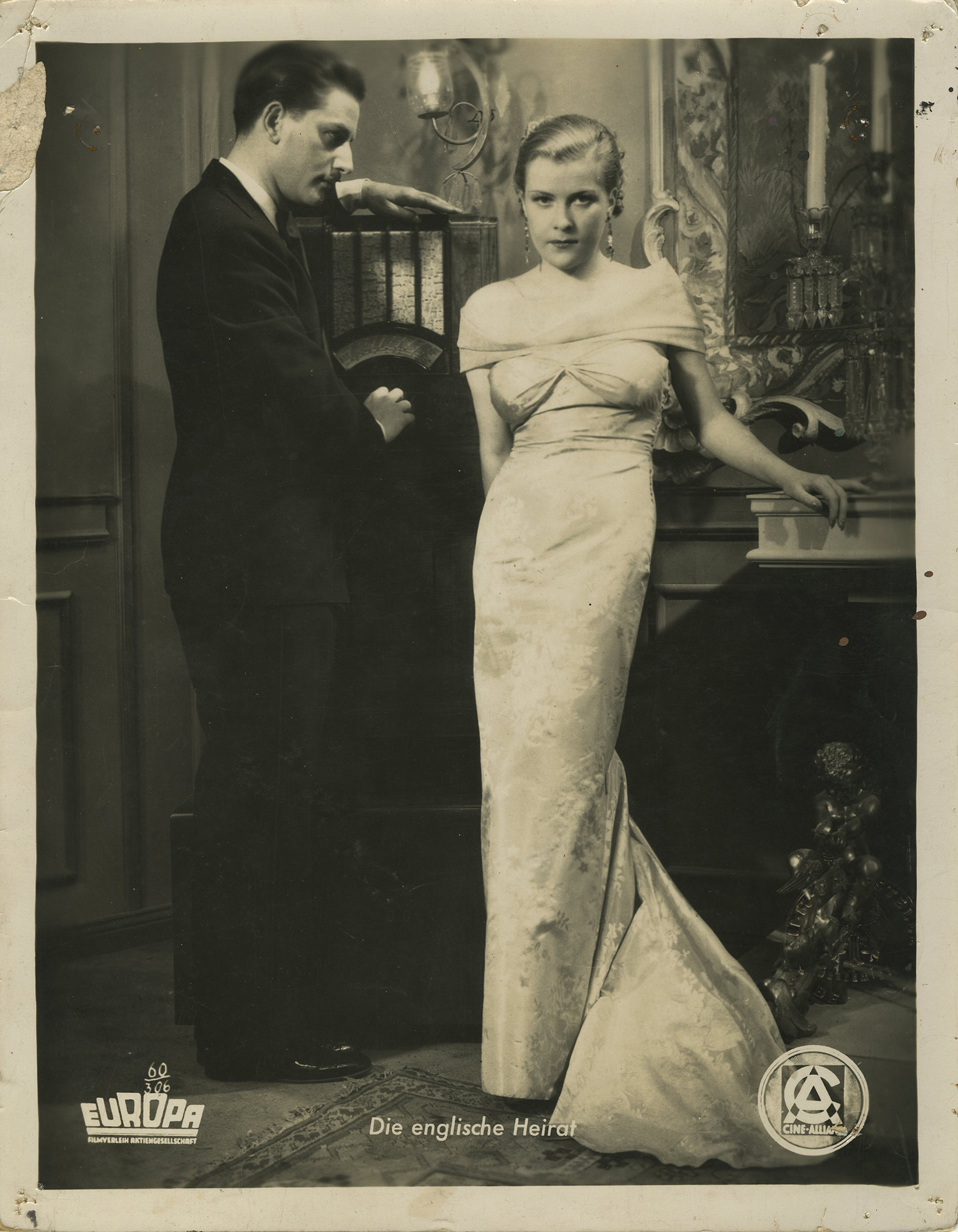 From Germany to Hollywood and the UK

It is often claimed that Wohlbrück was forced to flee Nazi Germany because – being both Jewish and gay – his life was in danger. However, an examination of contemporary records and press reports revealed that the situation was not so clear cut as this. Although it is often said that Wohlbrück’s mother was Jewish, her family had converted to Catholicism a generation earlier and he had an uncle who was a Catholic bishop. It is not an issue that either the actor or is peers seem to have discussed at the time – in fact I found evidence that he was regarded with grave suspicion by the earlier émigrés, who believed that his decision to remain in Germany between 1933 and 1936 was a sign of sympathy for the Nazi regime, and Jewish organizations in Hollywood actually called for his films to be boycotted.

The featured image at the top of the article is a cigarette card promoting Walbrook as a British star in the late 1930s. EXEBD 81513.

When he arrived in America Adolf Wohlbrück changed his name to Anton Walbrook, but it is often claimed that he disliked Hollywood and was eager to leave for Britain as soon as possible. Personal letters that I found in archives, however, revealed that throughout the Second World War he was actively considering various plans to return to America, while contemporary newspapers occasionally reported that he had been signed up for Hollywood films or even Broadway productions. None of these projects were ever realized, and one might presume that, having taken British nationality in 1947, Walbrook would have settled in Britain and concentrated on building up his film and theatre career, especially given the critical acclaim he received for his work with Powell and Pressburger. His postwar career was actually characterized by a sense of restlessness and fragmentation, with the actor seeming to struggle to find a sense of belonging either in the UK or in Europe, to which he began returning for film and theatre appearances.

These international aspects of Walbrook’s life and career were only part of the reason why research for the biography proved such a massive undertaking. In addition to secondary reading on a vast range of topics that stretched from fin-de-siècle Vienna to 1950s British musicals, I needed to sift through decades of film magazines, theatre programmes and ephemera to unearth and piece together fragmentary details of Walbrook’s work. The extensive holdings of the BDCM proved invaluable for this work, with additional material coming from other film and theatre archival collections such as those held at the V&A and BFI. Having accumulated a large amount of research material, including my own collection of Walbrook memorabilia, there were still major challenges in making sense of it all. The biography’s ‘masks and mirrors’ subtitle refers both to imagery that recurs in many of Walbrook’s films, but also to the ways in which his elusive and enigmatic personality continued to conceal his true self.

Writing the biography became a fascinating exploration of the relationship between Walbrook’s personal life and star persona, drawing upon the themes of doubles, pseudonyms and fragmented identities. Increasingly, I came to realize how significant the experience of exile had been in Walbrook’s life, and this was underscored by Peter Lang’s decision to publish the biography as part of their Exile Studies series.  The book contains 25 illustrations, including a reproduction of one of Dashiell Silva’s paintings of Walbrook which was originally used in the museum’s 2013 ‘Star and Enigma’ exhibition. It can be ordered direct from the publisher [https://www.peterlang.com/view/title/72298?format=PBK] or through any bookshop or online retailer. 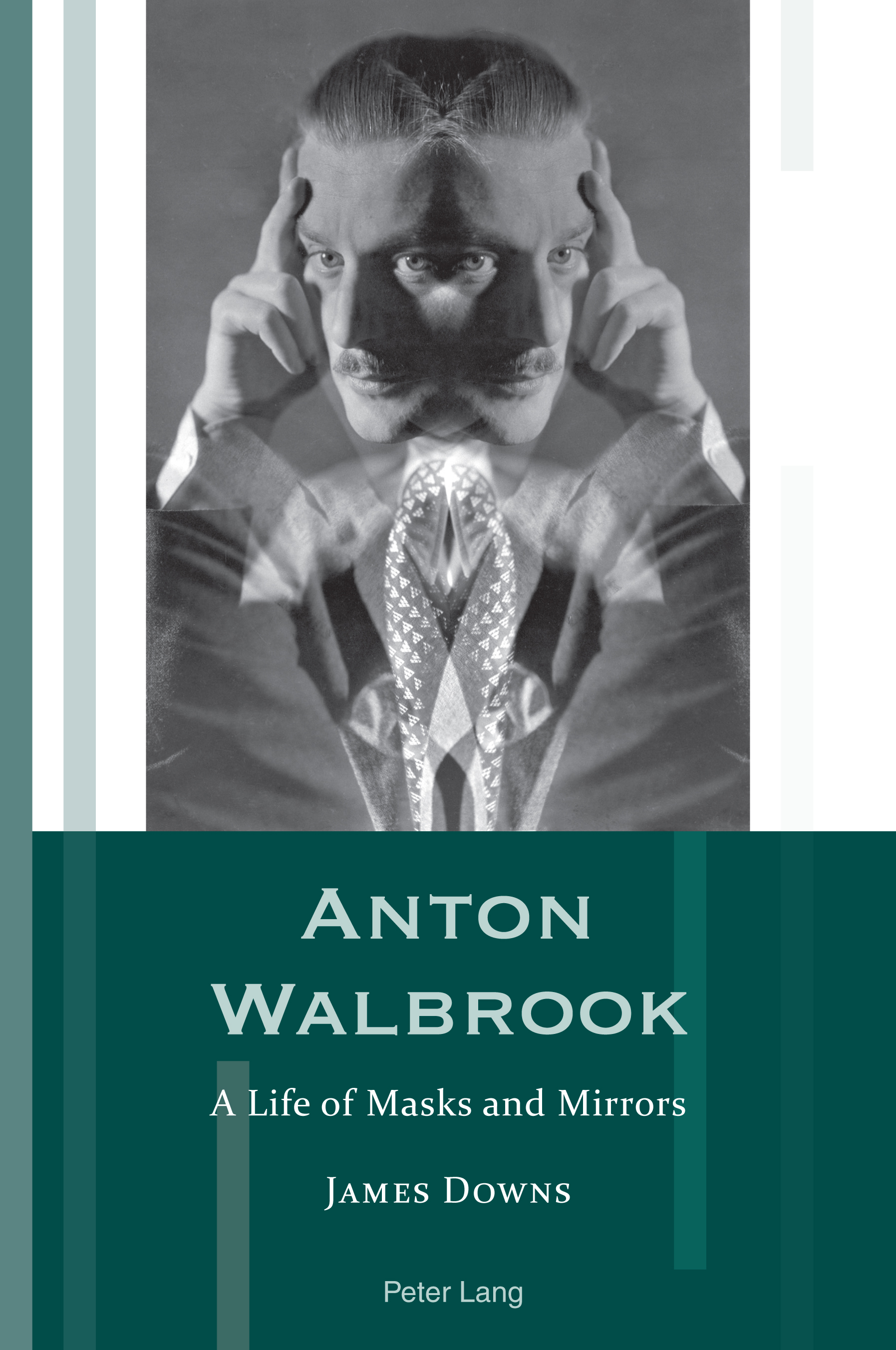