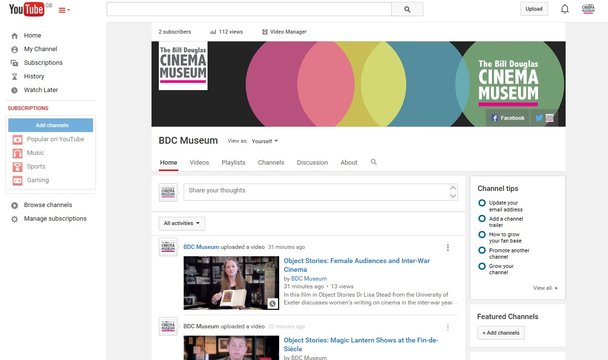 We are delighted to launch The Bill Douglas Cinema Museum’s YouTube Channel with four short films made using the collections. Under the umbrella title of “Object Stories”, Academics in Film Studies at The University of Exeter talk about how they use artefacts in The Bill Douglas Cinema Museum for their research. The films were made by student filmmaker Mini Warren and were funded by the University’s Research and Knowledge Transfer department to share the scholarship undertaken at the University with the wider world. The museum is of course a unique resource to Exeter, is free and open to the public, and its holdings demonstrate the importance of moving image culture on society.

The first film features Dr Lisa Stead talking about her work on women’s writing about cinemagoing in the inter-war years. Her work uses fan magazines, postcards and popular fiction from the collection. Lisa’s forthcoming book on this topic will be published in 2016 by Edinburgh University Press and is entitled Film Fictions: Women's Writing, Selfhood and Intermediality in British Interwar Cinema.

In the next pair of films Dr Helen Hanson http://humanities.exeter.ac.uk/english/staff/hanson  discusses her research on early sound craft and style in classical Hollywood Cinema, using fan magazines and technical publications held in the museum. Dr Hanson has recently been awarded a British Academy/Leverhulme small grant for her research on film sound history and she is currently writing a monograph on this topic, entitled Hollywood Soundscapes: Film Sound Style, Craft and Production 1931-1948, which will be published through BFI/Palgrave MacMillan in 2016.

The final film shows Dr Joe Kember discussing the museum’s extensive magic lantern collection, particularly the slides and lectures produced by campaigning and religious groups such as the temperance movement. Dr Kember has recently won an award as part of a European consortium to the JPI Heritage scheme with a project called ‘A Million Pictures: Magic Lantern Slide Heritage as Artefacts in the Common European History of Learning.’ He is also co-authoring a book on popular entertainment in the South West in 2017 entitled Picture Going: Visual and Optical Shows 1820-1914.

We hope you enjoy the films and that they inspire you to explore our collections a bit further. Thanks to Mini for her great work on the productions. Subscribe to the channel at where you will be able to explore more films about the museum in the future

You can see more about the working process behind the ‘Object Stories’ project by looking at the Pinterest board and by looking at #objectstories on Twitter.