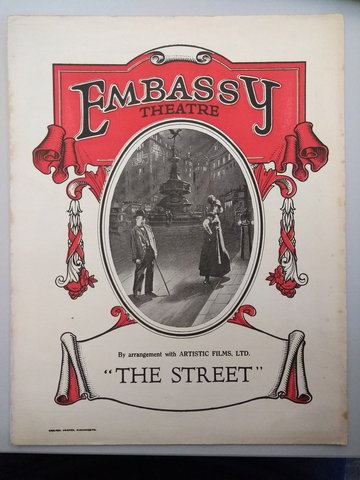 In mid-1940, some time between the Dunkirk evacuation and the Blitz, Ernest Lindgren, founding curator of the BFI’s National Film Library, wrote an article on the theme of nostalgia. Looking through copies of the little film magazines of the late 1920s and 1930s, including the one he was writing for, Sight and Sound, he evoked ‘one of the most exciting and vital periods of the cinema – the period when it first became fully conscious of its potentialities as an art form’. Looked at another way, it was the period when a culture emerged to promote cinema as an art form: to import and show films from outside the Hollywood-dominated mainstream; to write about films of all kinds with the seriousness they deserved; and (Lindgren’s department) to make sure of their physical survival. Lindgren was understandably gloomy about the chances of this ‘film art movement’ thriving ‘while we live under the grim shadow of war’, but believed that ‘its progress is merely interrupted’.

The history of this film art movement has been my main area of research for the past dozen years. With the support of a generous stipend, I visited the Bill Douglas Cinema Museum in early September mostly to look at its unique collection of what is called ‘ephemera’ – ephemera in this instance meaning that which is usually and wrongly considered not worth collecting. Most accounts of the film art movement begin with the Film Society [http://www.screenonline.org.uk/film/id/454755/index.html], founded in 1925, and the little magazine Close Up, founded in 1927, and the Bill Douglas Cinema Museum has material from both; but I am especially interested in the climate they grew out of, and the question of how film came to be taken seriously in the first place. The programmes, flyers, and handbills which the collection contains – and which no other collection contains – are tangible evidence of this earlier process, which accompanied the cinema’s conquest of the West End in the years after the First World War.

The temporary conversion of the Covent Garden Royal Opera House into a cinema in the winter of 1921–2, which began with the European premiere of the Douglas Fairbanks version of The Three Musketeers (1921), was a milestone in both stories. I wrote about it once [https://www.theguardian.com/film/filmblog/2010/dec/22/diaghilev-ballets-russes-british-cinema]but it is something else to see and handle the programmes – and the ‘All for One and One for All’ lapel pin – which bring the event to life in a way that newspapers and distant recollections cannot. The programme for The Three Musketeers explains that ‘because of its historical associations, prestige, dignity of interior construction and decoration, and great size, has been chosen for the presentation of the World’s choicest examples of screencraft’; possible aiming for snob value, it is notably austere, doing without adverts.

Definitely aiming for snob value, in 1924 the Holborn Embassy set out, as its programme declared in the featured image (EXE BD 18259), to present ‘those artistic and “different” films which the ordinary exhibitor is too cowardly, or too unintelligent, to offer to his patrons. [...] Many films of outstanding merit are produced which do not generally make their appearance on the screen, because they are considered “too clever” for general exhibition. We have a decided partiality for films of this character, as we believe you have; and we aim at the privilege of acquiring a clientele who experience a similar partiality.’ All this was a year before the founding of the Film Society. The particular film on offer was Karl Grune’s The Street (1923), described by Iris Barry at the time as ‘one of the most accomplished films ever made’. Despite the venue’s fearlessness, however, it had to conceal The Street’s Germanic origins: director and cast are unnamed in the programme, and it is given the apocryphal alternative title ‘A Night in Paris’. German films had been boycotted by exhibitors after the Armistice, and were still controversial.

The Holborn Embassy did not thrive as an art cinema, but it was ahead of its time. Its successors in the 1930s fared better: the Curzon, founded in Mayfair in 1934, is still a major player in the art cinema world; the Glasgow Film Theatre was founded as the Cosmo in 1939; and other venues established in that decade became synonymous with art cinema in Britain, above all the Academy, on Oxford Street, which lasted until 1986. The film art movement is often, and not wholly without reason, caricatured as hostile to Hollywood out of reflexive anti-commercialism. However, unlike the Film Society – and unlike the film societies which spread across the country in the 1930s – the art cinemas were commercial ventures, albeit of a peculiar kind. In a business synonymous with scale, based on the creation of hundreds of identical prints, art cinemas and distributors worked differently. But not that differently, which is part of what interests me about them. The Bill Douglas Cinema Museum has an unrivalled collection of their so-called ephemera, including scores of programmes from the Academy.

One purpose of this kind of research, less text-heavy than I’m used to, is to add texture to the bare facts – in a figurative sense to put faces to names; but in one instance that was literally so. The inaugural programme of the Studio One cinema, which opened not far from the Academy at Oxford Circus in 1936 – both were in fact old cinemas unable to compete in the West End after the construction of the ‘super-cinemas’ from the early 1920s – has just the kind of unexpected find one hopes for, a page devoted to its ‘organiser’ Vera Llewelyn, who, as the programme says, ‘can justly claim to be one of the pioneers of the Continental film in England’. Apart from that, one of the programmes she organized, in the autumn of 1937, includes the two-month run given to Michael Powell’s The Edge of the World (1937), an event possibly responsible for keeping him in this country and out of Hollywood. 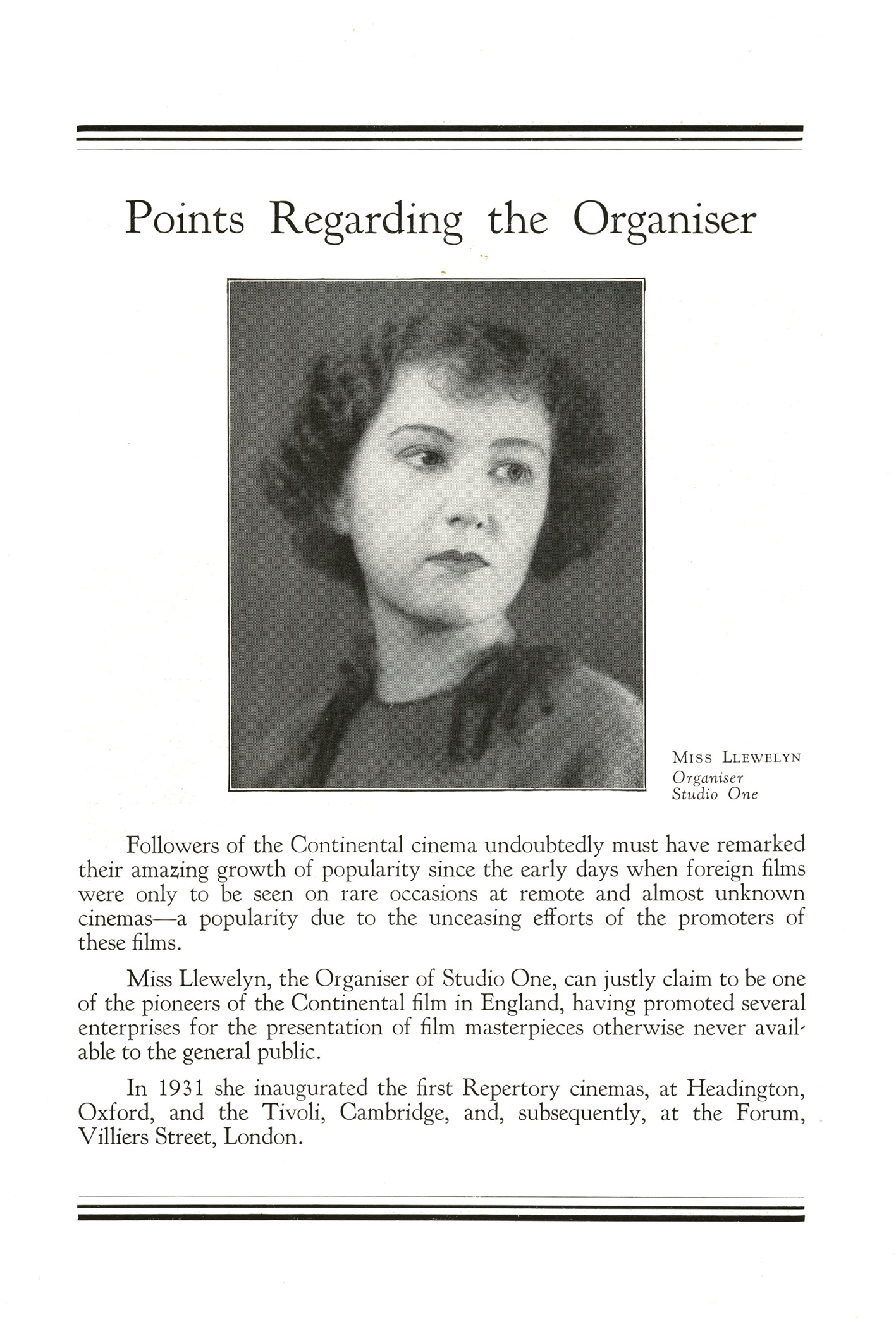 Lindgren was eventually proven right. Most of the art cinemas, having gone dark in the first year of the war, reopened, in the case of the Academy a few months before D-Day. In the meantime, though the Film Society itself closed down for good in 1939, the film societies kept the flame alive. The Bill Douglas Cinema Museum has a particularly comprehensive cache of material relating to the awkwardly named London Film Institute Society, which continued the Film Society tradition through the war years before itself being superseded by the New London Film Society in 1945. Most of the LFIS’s wartime programmes included revivals of the French classics of the 1930s.

Run from its inception in 1935 by Olwen Vaughan, the BFI’s secretary, the LFIS was the forerunner of the National Film Theatre (now BFI Southbank), at first operating out of the Forum Cinema, underneath Charing Cross railway station, which for a time had been programmed by Vera Llewelyn. It was Vaughan (rather than Lindgren) who did most to foster links between the British film art movement and its equivalent in Paris, notably through Lindgren’s opposite number (and future nemesis) Henri Langlois. One of the most extraordinary documents I saw in Exeter was a typewritten programme for a screening Langlois arranged at the Forum in January 1938, introduced by Alberto Cavalcanti. Another more colourful item was this ticket for an evening with Jean Renoir, then a relatively little-known figure in Britain, a year later.

I went to Exeter with a firm sense of what I wanted to see, derived from the work I had already done; I came away aware that I’d only scratched the surface.