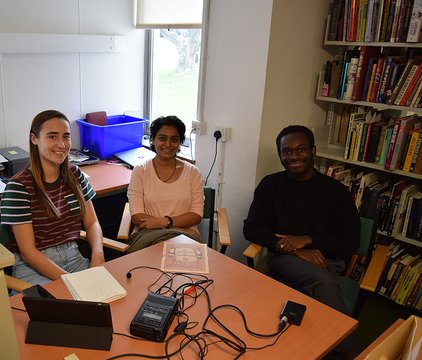 We have another podcast in our series of interviews from experts using the museum's collections. This time Indian filmmaker Renu Savant visited the museum on a research stipend to look at our 19th and early 20th century materials on India and explore how the sub-continent was seen through different kinds of visual media. Renu is reimagining these imperial era artefacts from a contemporaray Indian perspective.

In the podcast Renu is interviewed by museum volunteers Elliana Hamer and Ben Apea about her work as an award-winning filmaker in India who works in both fiction and documentary. She then discusses what she has discovered in the collections, including thepanorama 'The Overland Mail to India'.

Renu's films include 'Death of a Village', 'Aaranyak' which won the Golden Lotus Award in 2015, and 'Many Months in Mirya'.

Renu is pictured here with Elliana and Ben.