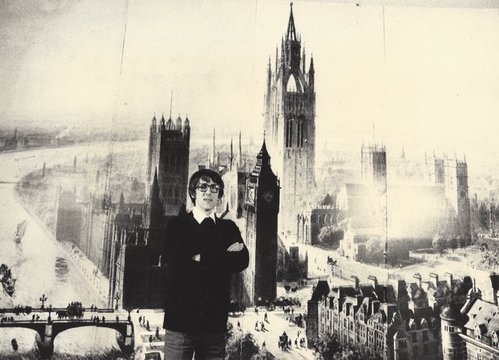 The global community of researchers into the history of optical media is mourning the sudden death in June of Ralph Hyde, a worldwide authority on the panorama. Ralph’s work in books, pamphlets and particularly his 1988 exhibition at the Barbican, Panoramania!  revived interest in this fascinating form of immersive media. From the end of the eighteenth century, panoramas were a hugely popular form of public entertainment for the next fifty or sixty years and have continued in various forms ever since; the study of panoramas and related media (Ralph also wrote on myrioramas, dioramas and paper peepshows) illuminates our understanding of spectacle, perspective, entertainment industries, the development of the city, and the experience of living in the nineteenth century.

We are very grateful to Ralph’s daughter Jeannette and his estate for donating Ralph’s comprehensive but unpublished work The Biographical Dictionary of English Panoramists to The Bill Douglas Cinema Museum. Ralph began the project as a joint venture with the German scholar Stephan Oetterman but contimued working on it for many years after Stephan moved on to other projects. Although never finally completed the dictionary offers details on many hundreds of panoramists, not just in the UK but also the USA and other parts of the English-Speaking World (and indeed some in Russia too). You can link to a PDF of the dictionary here. Rights to the Dictionary are with the estate of Ralph Hyde. You can find obituaries of Ralph here in the Daily Telegraph and here in The Guardian. In his tribute for the international Panorama Council Erkki Huhtamo said “The worlds of panoramaniacs and early visual culture researchers and collectors have lost one of their most loved, outstanding and enthusiastic masters”.

The Dictionary complements the very extensive holdings in The Bill Douglas Cinema Museum on Panoramas and 19th century immersive media and you can find out more by entering Panorama into the search box on the site.