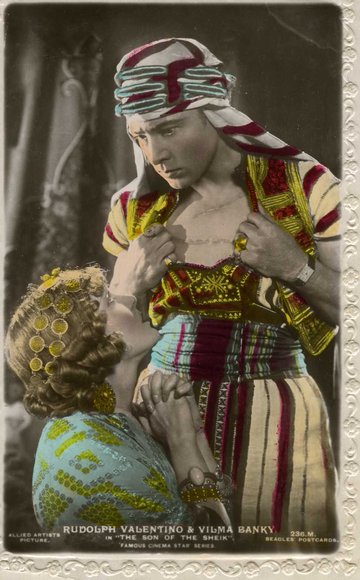 One afternoon in November 1921, not long after his latest picture The Sheik had been released, Rudolph Valentino strolled casually along Sunset Boulevard. He was browsing the window displays of the most fashionable Los Angeles boutiques, accompanied by two of his closest friends, when suddenly, a woman passing by recognised Valentino and his entourage and screamed his name. It took mere seconds for a stampede to form, every woman in earshot racing towards the terrified actor (Botham, 2002, p.4.).

Since starting my internship at The Bill Douglas Cinema Museum, I've been fascinated to discover the wealth of artefacts the museum holds on Valentino, a figure I've long been intrigued by. The museums holds many items from the 1920s and from after his death. Through the treasure trove of postcards, sheet music and books in the collection, I've discovered the myth that surrounded the actor throughout his meteoric rise to fame - and perhaps some of the truth that lay behind the headlines.

This incident in Los Angeles was only the beginning of a new mass hysteria which would characterise Valentino’s career, and which continues to be a cliché of stardom today – hysterical fans and paparazzi in pursuit of the object of their desire. As the world’s first superstar and at the time the most famous face to grace the silver screen, Valentino was breaking ground in many ways. But this reaction was completely unprecedented. And, as with many celebrities who pass away before their time, it would be his death in 1926, at the age of just 31, which provoked the ultimate hysteria from his legions of fans. 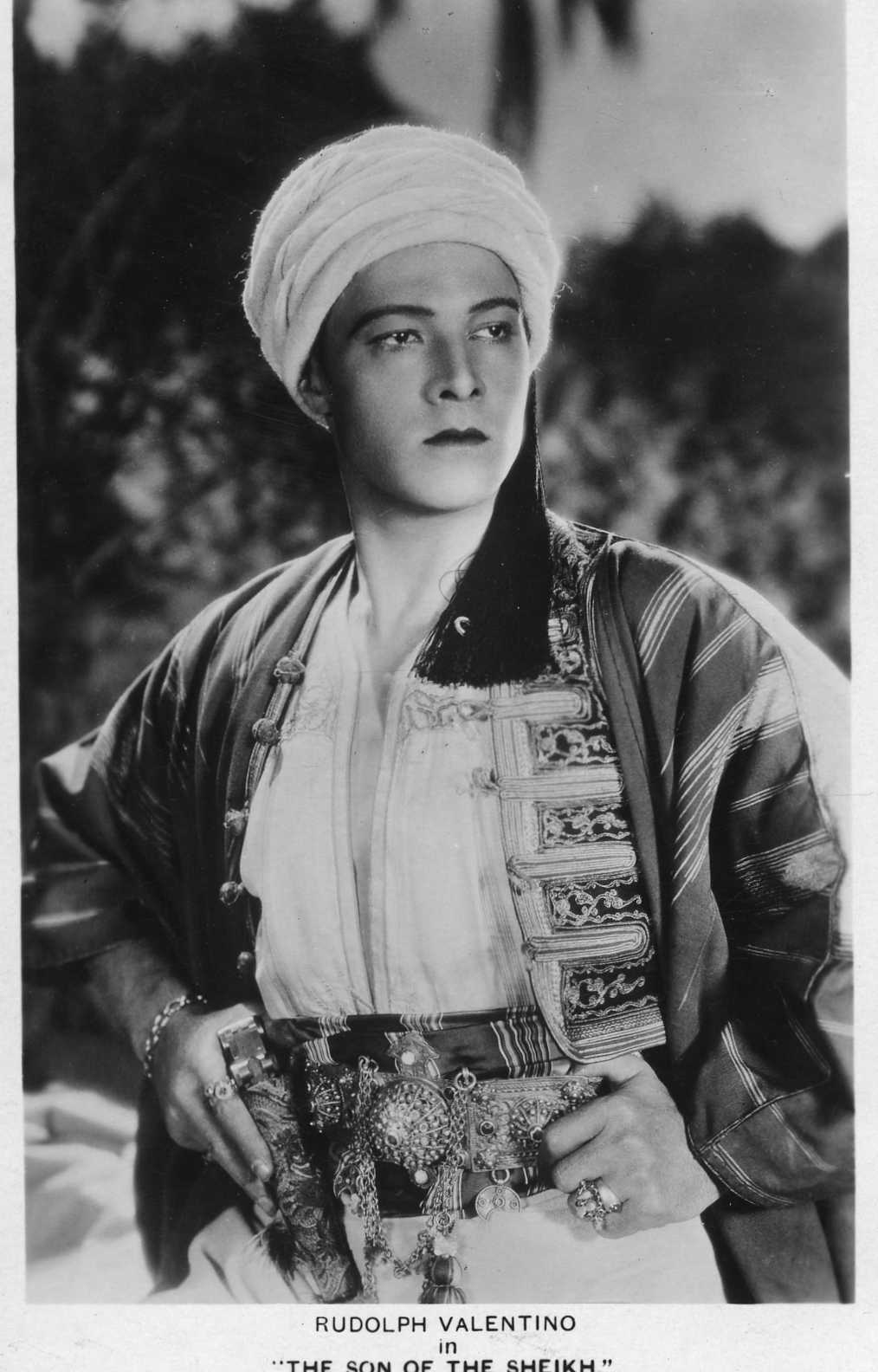 Valentino as his perhaps most famous character, the title role in The Son of the Sheikh (1926). The film was released just weeks before the actor's death (EXEBD 86254)

Early on in his career, however, he was never pinned as a typical romantic hero. In fact, director D. W. Griffith rejected Valentino after the actor auditioned for him in 1918, on the grounds that ‘the girls would never like him’. In a film industry beset with xenophobic stereotypes, the olive-skinned Italian portrayed villains and ‘exotics’ rather than all-American romantic leads: original postcards in our own collection show the actor in character as Indian rajahs, South American gauchos, and, most famously of course, the two ‘Arab’ sheikhs. In fact, the sheikhs proved so darkly handsome and alluring that they actually caused women to faint in cinemas. What directors had seen initially as a set-back would become Valentino’s unique selling point, and the very reason that he attracted such avid attention. He was attractive precisely because he didn’t look like the boy-next-door; he was certainly ‘not like the nice boy who takes you to all the high-school dances,’ Agnes Smith wrote tellingly in Picture-Play Magazine in 1922.

Valentino’s break-out role had come in 1921, when he starred as Julio in The Four Horsemen of the Apocalypse after being headhunted by screenwriter June Mathis for the role, with further successes Blood and Sand (1922) and The Eagle (1925) soon to follow. In contrast to the macho characters he had portrayed in these films (a matador and a Russian soldier respectively), his second wife, the set-designer Natacha Rambova, began to hand-pick more effeminate roles for Valentino in films such as Monsieur Beaucaire (1924). His turn as the heavily made-up and elaborately costumed Duke of Chartres, again depicted in postcards in the collection, continued to boost his popularity among women cinema-goers, but further enraged their male counterparts; they found his androgynous style jarring with the engrained image of the wholesome American heartthrob (Leider, 2003, p. 252). In fact, an anonymous writer in the Chicago Tribune , furious about the installation of a new face powder dispenser in  a men’s public bathroom, blamed Valentino himself for the apparent decline in Midwestern manliness in the infamous 1926 ‘Pink Powder Puffs’ editorial (Botham, 2002, p. 277). 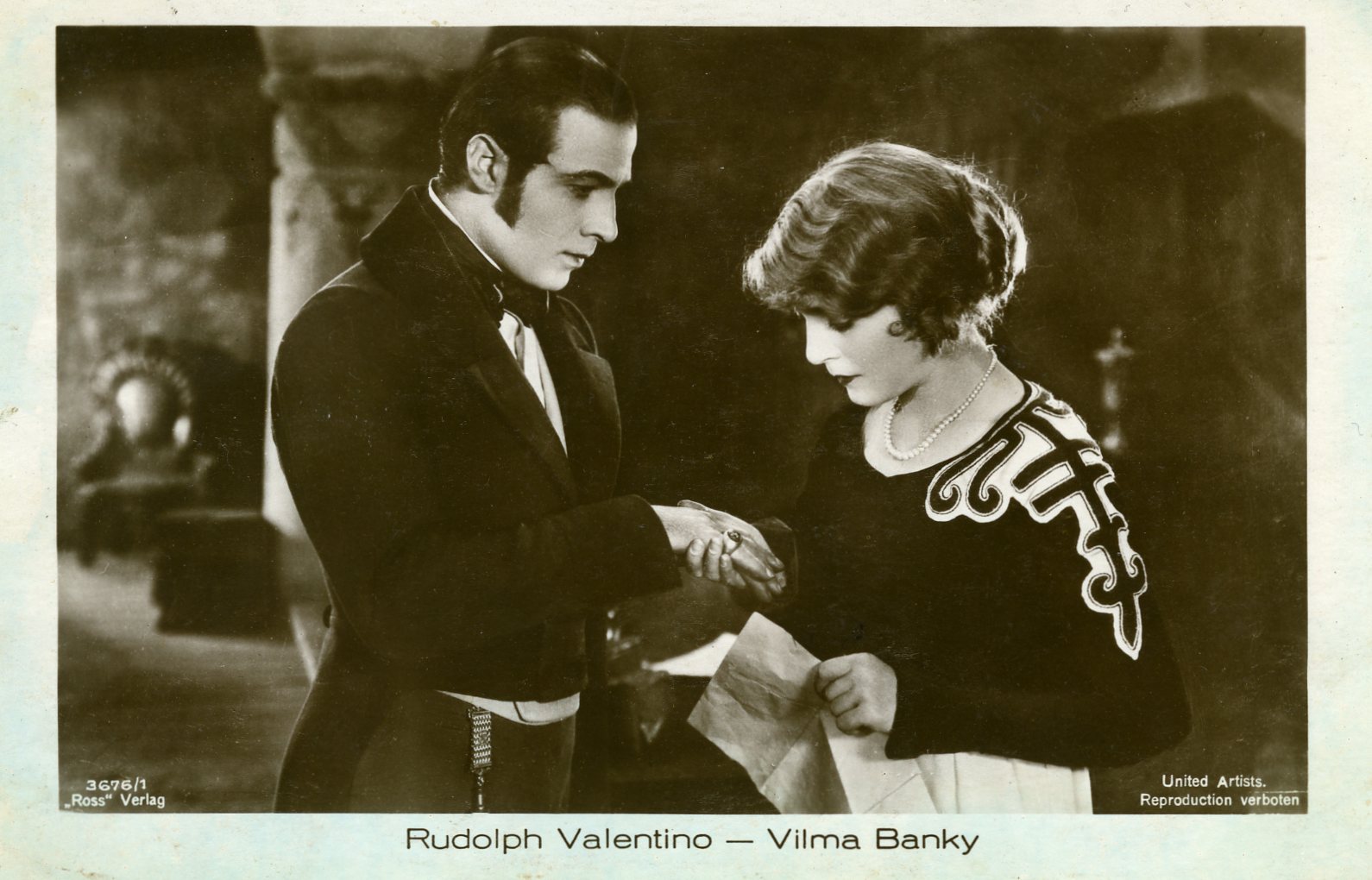 Valentino with his co-star Vilma Banky in a still from The Eagle (1925). He also starred opposite Banky in The Son of the Sheik (EXEBD 86311)

The attention and celebrity lifestyle that his string of box office hits entailed, however, was far cry from Valentino’s early life in Italy and Paris; he detailed in his own posthumously published memoirs, which we hold in here in the collection, how he had begged on the streets of Europe before moving to New York. And it was on the east coast, far from the Californian studios where he had made his name, that he would meet his sudden and premature end. While on a promotional tour for The Son of the Sheik (1926), Valentino fell ill with appendicitis. After nearly a week in hospital – and after its phone lines had been inundated with thousands of calls from distraught fans – he died. His last words to Joseph Schenck, later chairman of 20th Century Fox, were, ‘don’t worry, chief. I’ll be all right.’ (Ellenberger, 2005, p. 51)

Until his $15,000 bronze and silver casket arrived, Valentino’s body lay in state in full evening dress at Frank E. Campbell’s Funeral Church in New York. His manager and friend, George Ullman, felt that Valentino ‘belonged to his public’, even in death. But the full scale of this new level of fanaticism that surrounded the actor was about to become apparent: as Valentino lay ensconced in Campbell’s Gold Room, thousands of avid fans stormed the funeral parlour, causing a near-riot in which one newspaper claimed seventy-five people were injured. Around the world, several of his most ardent fans reportedly committed suicide, unable to cope in a world devoid of Rudolph Valentino (Ellenberger, 2005, p. 82).

Following his first funeral in New York, attended by the likes of Mary Pickford, Douglas Fairbanks and Gloria Swanson, the actor’s body was returned by train to Los Angeles where a second service was held. It was to be just as well attended by the most famous show business personalities of the time – in fact, we hold an invitation to the service addressed to silent star Mabel Normand, with its accompanying mourning cloth. People gathered at railway stations along the funeral train’s route: in Pennsylvania, at Chicago, and at Yuma in Arizona, where Rudy had so recently ridden over the desert filming Son of the Sheik. Naturally his fame has not maintained the same frantic heights that it reached in the months and years immediately after his death, but the legend of Rudolph Valentino lives on. Over the decades, he has been the subject of several biopics, including Ken Russell’s Valentino (1977) and Vladislav Koslov’s Silent Life (2016), released to coincide with the ninetieth anniversary of the star’s death. In spite of his short career, Valentino undoubtedly shaped the landscape of cinema, broadening the spectrum of what it meant to be a heartthrob – once movie producers realised that their core audience responded to his uniquely exotic charm, they were no longer confined to quite such narrow limitations as before. It would be the fame that trailed in his wake, however – the thronging mass of photographers, autograph-hunters and downright fanatics – which has become, for better or worse, the blueprint for celebrity life even to the present day. 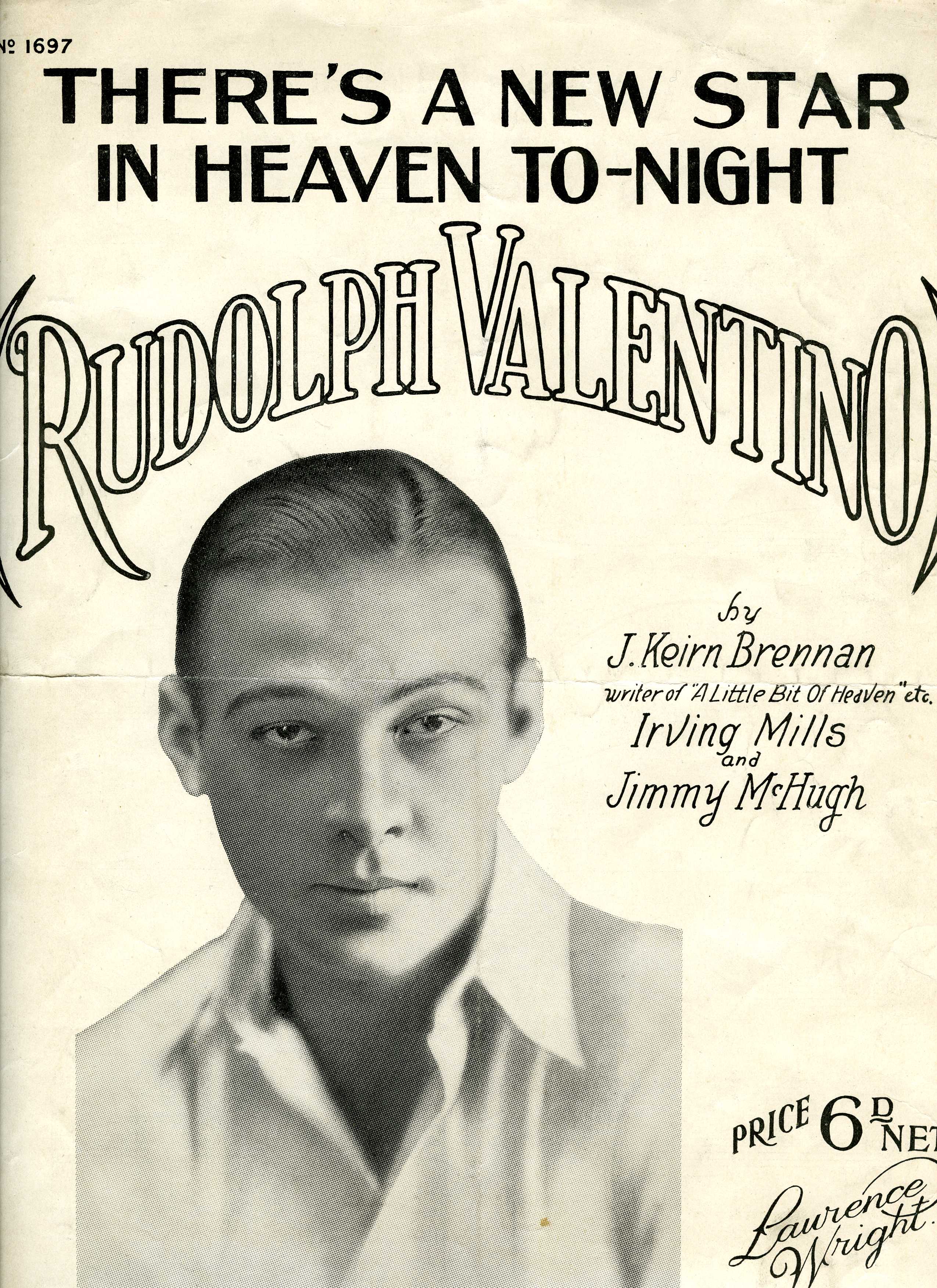 Sheet music for a popular tune released following Valentino's death. His first wife, the actress Jean Acker, released a song in tribute at a similar time, but it could not compete with the popularity of this tune (EXEBD 50101)

Ellenberger, Allan R., The Valentino Mystique: The Death and Afterlife of the Silent Film Idol (London: McFarland and Company, 2005)