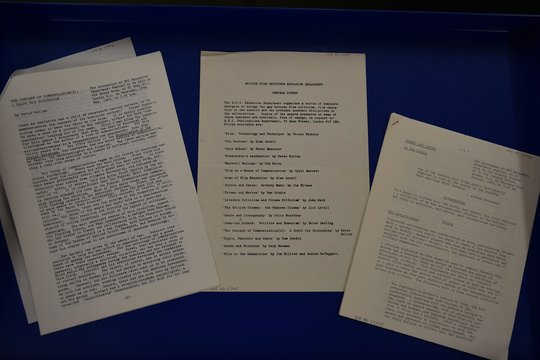 Our latest blog comes from stipend award holder Colm McAuliffe, studying for a PhD at Birkbeck College, University of London. Colm visited us earlier this year to explore the debates around Film Studies in the 1960s.

In 1988, the writer, filmmaker and academic Peter Wollen, reflected upon the abject state of film studies in early-to-mid 1960s Britain:

"It is hard now to remember how hopeless and moribund film studies were in the Sixties. Put crudely, the field was divided between ‘literary’ studies of the work of a select few ‘great’ artist-directors (usually European) and ‘mass-media’ approaches, numbingly empirical and effects-oriented, witless compounds of the worst of experimental and statistical sociology with a crass and simple-minded psychology. I don’t know which was worse".[1]

My research, which traces the transposition and circulation of what-we-now-call French theory in Britain, traverses this stale world which Wollen describes and re-configures it as fertile terrain for the imposition of intellectual thinking from France. There are many key agents responsible for promoting these theories alongside Wollen including key members of the New Left Review [NLR], itself re-imagined as a site of Western Marxist theory through the advocacy of its then-editor Perry Anderson, and also important figures at the BFI itself, none more so than the visionary Paddy Whannel. During the middle of the 1960s, an increasing overlap between the NLR and British Film Institute [BFI] begin to emerge: in January 1966, Wollen, fresh from writing thumbnail sketches of film directors for the NLR, was appointed to the position of Publications Officer by the BFI Education Department, headed by Whannel. The latter was actively engaged in shepherding film pedagogy away from the banalities of “film appreciation” and towards a more expansive outlook, reflected in the adoption of a new term: “film culture”. But it was the appointment of Wollen which was to really kick-start the transnational re-imagining of film culture in Britain. This role was not just through his own writings but through his imposition of a series of “Education Seminars”, beginning in early 1967 and continuing through to the following decade. Accordingly, my visit to the Bill Douglas Cinema Museum was, in effect, at attempt to define these seminars as a common ground where much of these figures and ideas converged and allowed these strange new theories from France to emerge and percolate (and, quite often, baffle and infuriate).

The Bill Douglas Cinema Museum provides crucial and essential material pertaining to this pivot between arcane notions of film appreciation and the intoxicating continental theories associated with the emergent film culture. Deep within the Museum’s collection lies a series of mimeographed copies of the texts for a large portion of these deeply influential education seminars. These sheets begin with the same formal announcement: the topic of the talk which is to be “for discussion at British Film Institute Education Department Seminar to be held at 70 Old Compton Street, London W.1, at 7pm”, usually on a selected Thursday in the month.

What was the function of these talks at the time? A further sheet in the archive offers some insight: “The BFI Education Department organises a series of seminars designed to bridge the gap between film criticism, film education in the schools and the orthodox academic disciplines in the universities. Copies of the papers presented at some of these seminars are available, free of charge, on request to: B.F.I. Publications Department, 72 Dean Street, London W1V 5HB”

The listed talks include topics ranging from “Film, Technology and Technique” (by V.F Perkins EXEBD 43949)to “Totems and Movies (by Sam Rohdie EXEBD 43938)” and the speakers range from BFI staff members such as Wollen and Victor Perkins to NLR acolytes such as Tom Nairn and those existing quite some distance outside of this milieu such as the Irish Jesuit priest Fr. Cyril Barrett and the sociologist Terry Lovell, one of the few female members of this cadre. Looked at retrospectively, the rubric for the importation of continental theory in British culture primarily lies within the rhetoric and writings of the Education Seminars and their corresponding Cinema One publications, which Wollen fronted in an uneasy alliance with the editors of Sight and Sound, and resulted in vanguardist studies of directors, such as Geoffrey Nowell-Smith’s Visconti (EXEBD 15891) and theoretical texts such as Wollen’s own Signs and Meaning in the Cinema (EXEBD 15896). My research at the BDC enabled me to view the seminar talks and these later publications simultaneously, revealing these discourses as an ongoing Research and Development process for travelling theories and film culture, a knowledge production and dissemination factory within the self-styled ‘laboratory’ of the BFI Education Department. 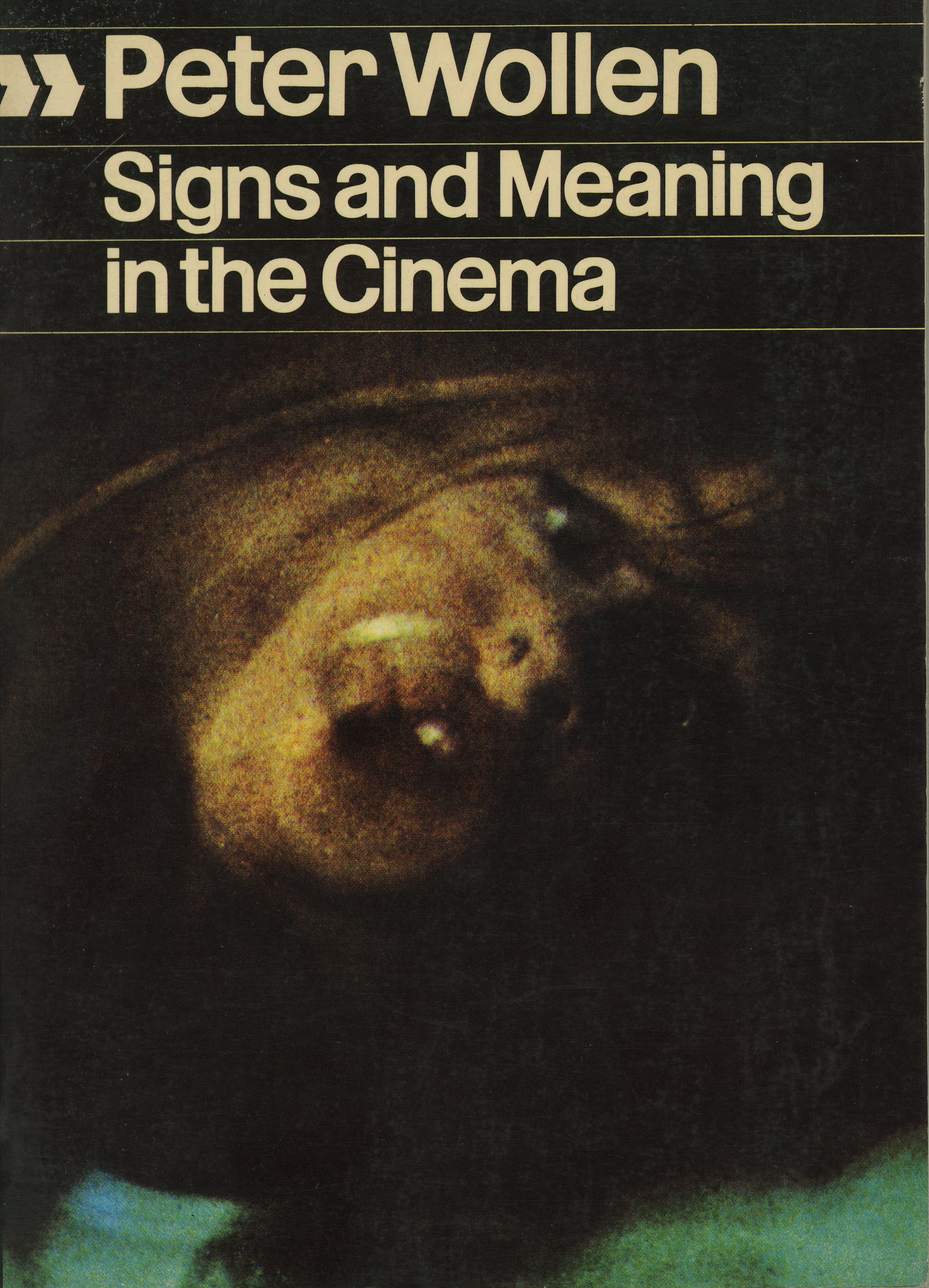 Wollen’s talks as demonstrated by the copies in the BDC museum further demonstrate a staggering extension of the standard film-lexicon, one which is marked by a certain ‘oppositional chic’ – the opposition appearing in the form of references to Francophone theorists such as Roland Barthes and Christian Metz which further indicated a form of expression far removed from the empirical standards of contemporary Anglophone film writing. Wollen’s trenchant discourse adheres to a syntactic structure, almost breathlessly listing theories and theorists, demonstrating the rupture and rapture of the deployment of French theory in all its urgent vitality. Wollen posits a sociological construction of these theorists within the theoretical domain which Wollen is both instigating and operating within; an act of intellectual positioning, inaugurated and galvanised by his own position as Publications Editor at the BFI.

The scope of my research was thoroughly enhanced by the accessible nature of this material in the BDC Museum. I was able to efficiently collate and cross-reference material from the seminar with later material published by the same authors in more official formats, a move which allowed me to trace the author’s own intellectual development through minor edits and alterations apparent between the differing versions. The presentation of this material in the Museum’s collections  allowed my research to fully gauge the intellectual reach of the BFI Education Department, and its ability to call in people and ideas from the worlds of Marxist politics, philosophy and film criticism. The seminar setup emerges as a site for the encouragement and fostering of debate and interpretation, generating a scenario where foreign ideas could be personally introduced and discussed. My reading of these seminar papers at the archive reflected a fluidity of movement: French theory in action, a constant connection and reconnection of differing theorists to the film horizon until finding one which is most effective within the given moment. Within the rhetoric of the seminar, we witness the seeds of theory being fused with a form of intellectual thinking which suggests vivid alternatives to current forms; the seminars present theory in its most exciting context, in a network of movement, translation and application and very much alive to the intellectual currents of the contemporary moment.

While my research in the Museum’s collections was focused upon the mid-to-late 1960’s, the work of “travelling theories” undertaken by the seminars was to impact greatly upon the BFI over the following decade. For some, “French theory” became shorthand for unnecessary pretentiousness, a sort of intellectual weightlifting showcasing supposedly superior critical skills; for others, this theoretical practice was a vital tool in the emancipation of contemporary culture from existing power structures. The sociological antagonism provoked by the use of French theory generated significant institutional power struggles at the BFI, most notably in 1970, but re-occurred throughout the decade, often through the prism of the film journal Screen, and was often played out across other sites of reception for these theories, most notably the “MacCabe Affair” at Cambridge in 1981.

My own research is currently working towards a book-length publication of the rise of French theory in Britain during this period and, specifically, its dissemination through intellectual work in non-academic sites such as the NLR and BFI.  My work at the Bill Douglas Cinema Museum has been extremely useful in allowing access to the often dizzying range of theories and theories tested out in the field and has allowed me to develop an authoritative overview of the work undertaken at the BFI during the heady days of film culture in late 1960s Britain.