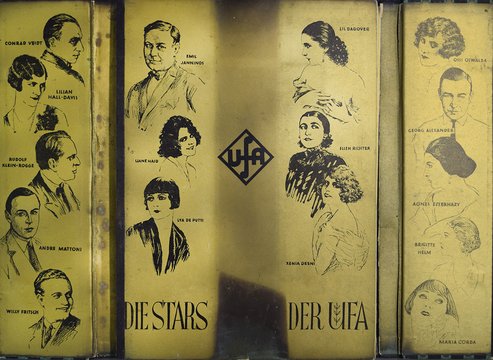 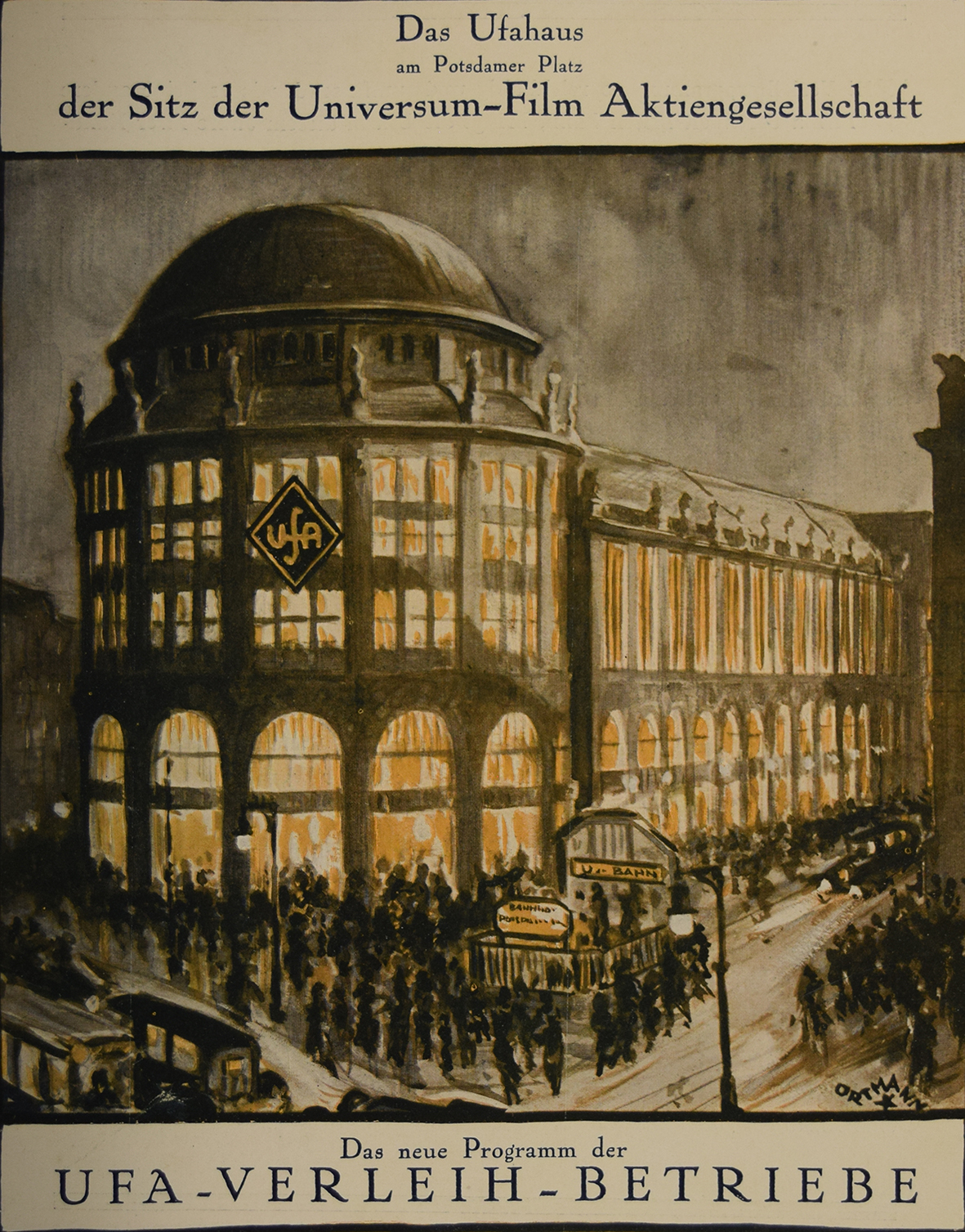 The new temporary exhibition on German Cinema, put togerher by volunteers Alice and Clodagh, is showcasing a hidden gem within the Bill Douglas Cinema Museum’s archives: an Ufa Campaign book (EXEBD 78523). It was published in 1927, with its function being to promote their upcoming films. Each film has several illustrated pages dedicated to it, as well as the actors and actresses within the films. This artefact allows us a glimpse into one of the most pivotal moments in German Cinema, with the introduction of Tonfilme [sound films] in a period that is often considered to be the highpoint of German cinematic art but is also just before the advent of National Socialism. 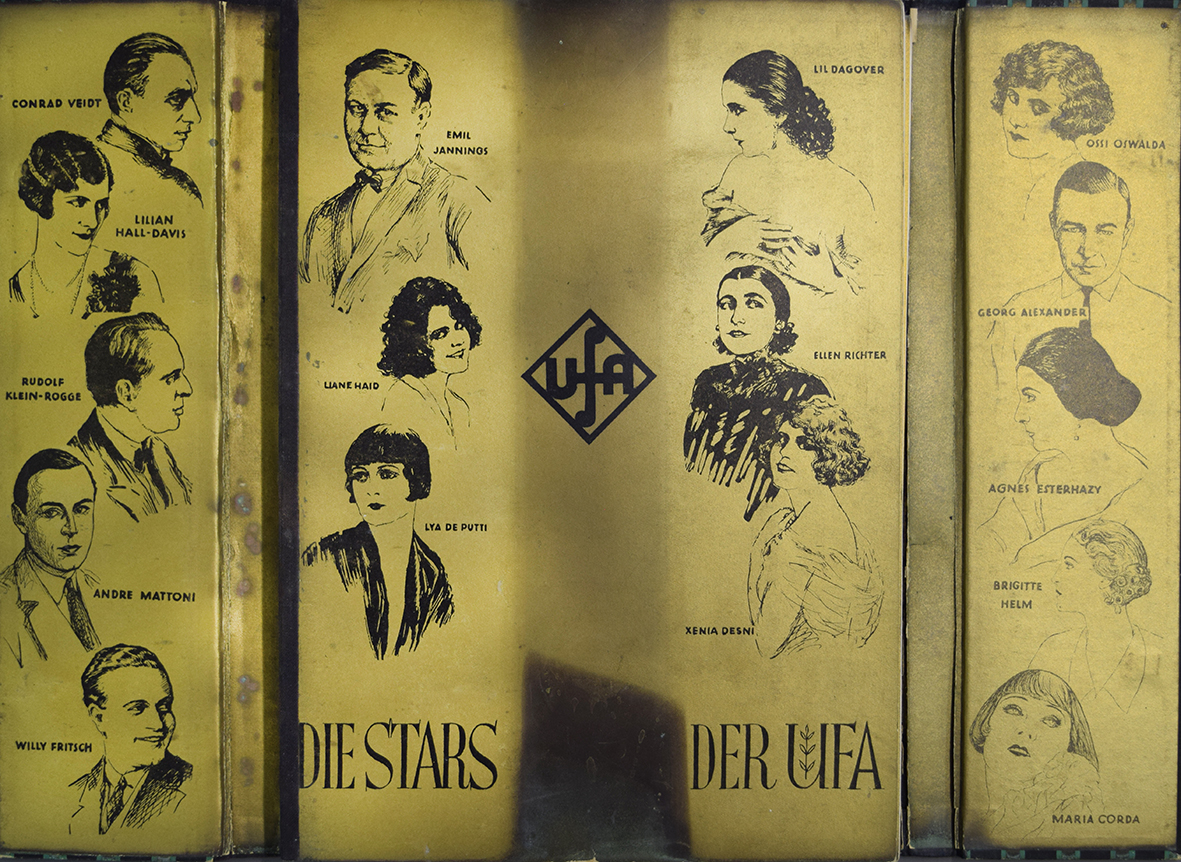 The inside of the Ufa campaign book

Famous actors and actresses were essentially ‘owned’ by production companies in these times. As a result, the same actors and actresses would appear in many films. This was very satisfying for audience members, who liked to see time after time their favourite stars on screen. However, with the invention of sound films, many of their careers did not survive. 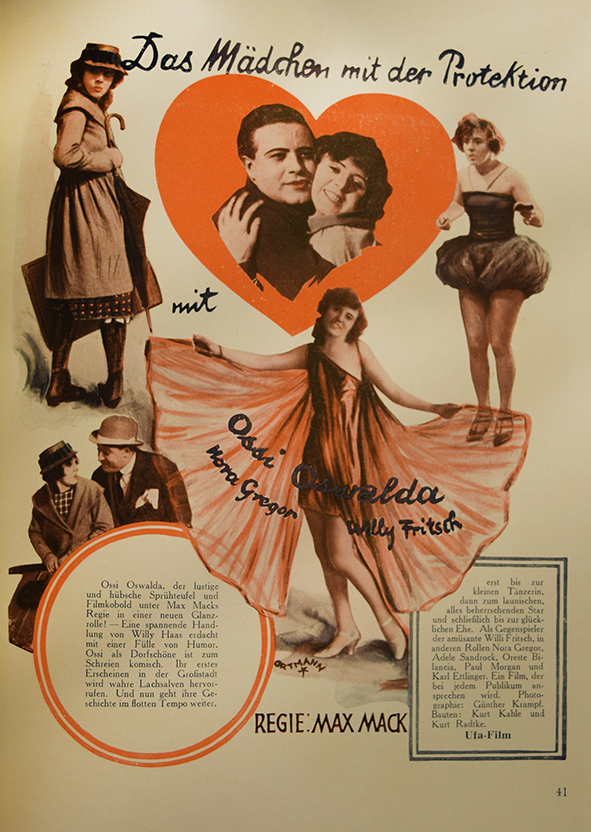 Ossi Oswalda originally trained as a ballerina and worked in chorus lines in theatres, before being discovered by Ernst Lubitsch, the famous German director. The first film she was cast in was Schuhpalast Pinkus [The Shoe Palace] in 1916. She was most famous for her comic portrayal of characters, who were typically spoiled and child-like. In 1926 she tried to change this perception of her by acting more glamorous roles, but to no avail. Sadly her career did not survive the transition to sound films. She became bankrupt and eventually died at the very young age of 48 in Prague in 1947.[i] 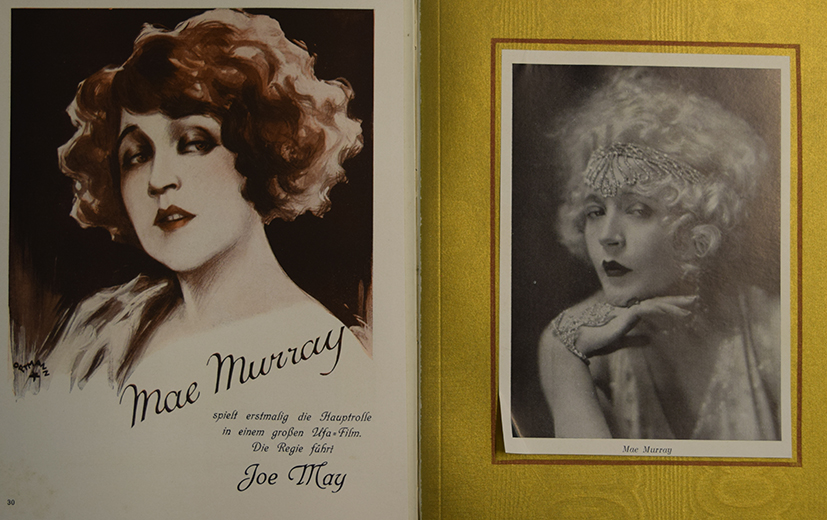 One of the most famous actresses that feature in this campaign book is Mae Murray. She was born in 1885 in Manhattan under the name Anna Mary Koenig, but later changed this to Mae Murray when pursuing a career on stage and even changed her birth year to 1895! She was the rare example of a Ziegfeld dancer to successfully make the transition from the stage to the big screen.[ii] She caused much controversy in German cinema after she backed out of a lucrative Ufa contract in 1925 to continue making films in Hollywood.[iii] Here, she is being promoted as a starlet, although she never actually made any films with Ufa. Her unusual beauty was instantly recognisable and made her an icon in silent films. Even her rather turbulent personal life enhanced her celebrity status. She had an affair and later married Robert Z. Leonard, the famous director.[iv] She then went on to marry David Mdivani, a Georgian refugee who worked as a fortune-hunter, with whom she had a child although she later lost custody .[v] Unfortunately, her career started to fail and she ended up dying in squalor.[vi] 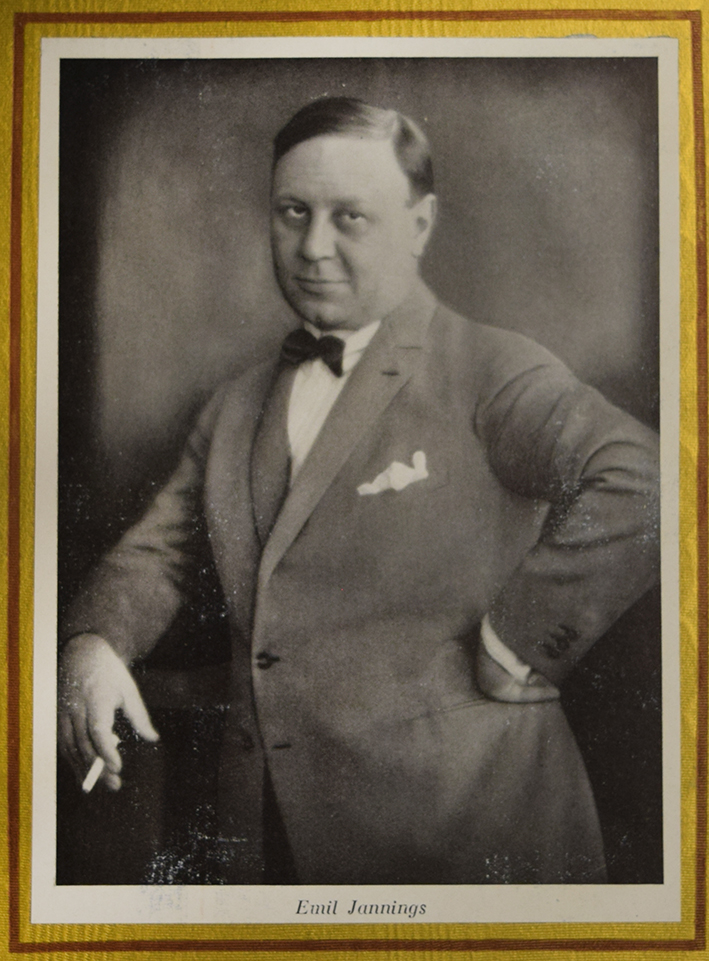 Emil Jannings was a Swiss actor born in 1886 most famous for his role in Der Blaue Engel [The Blue Angel]. He started his career as a young man, touring all over Germany as a strolling player and eventually ending up in Berlin just before WWI: the heart of Expressionism at that time. However, German cinema was drastically changing when this campaign book was published and Jannings had to change with it. Originally, he was famous for the portrayal of historical figures, such as Henry VIII in Anne Boleyn, but went on to make a name for himself as portraying the everyday man, particularly notable in Varieté [Variety]. He had a temperamental personality and was known to be difficult to work with. He too left Hollywood when talkies started coming into force, but went on to be a fanatic supporter of the Nazis and was one of the lead actors in that time.[vii] 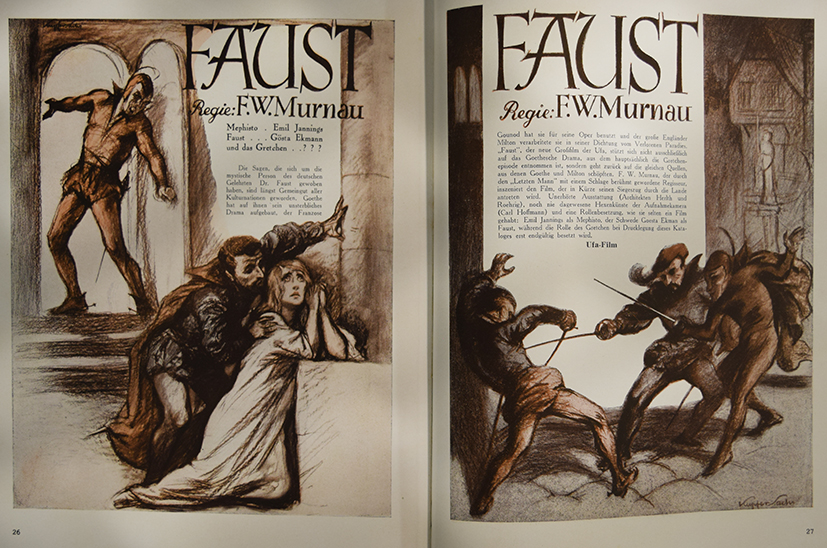 The production of Faust coincides with one of the most difficult periods in Ufa’s history as in the mid-1920s Ufa had run into serious financial problems, reporting tens of millions of marks in losses. Luckily, Ufa was saved from bankruptcy thanks to a business deal with Paramount and Metro-Goldwyn-Mayer, creating the joint distribution company Parufamet. However, this deal grossly favoured the American companies. Instead of opening a new market in America, the business deal closed it off and American companies began to start showing more and more films in German cinemas. This ultimately led to even more financial trouble for Ufa as they spent extravagantly on the production of films in the vain attempt to compete with Hollywood. Faust was just one of the films that Ufa was hoping to be prestigious enough to compete. It was, but it was still a box-office loss-maker. The 1929 adaptation of Faust can be seen as Murnau’s and Janning’s farewell to Ufa before they moved to Hollywood. Murnau made the classic Sunrise in Hollywood but died shortly afterwards in a car accident.[viii] 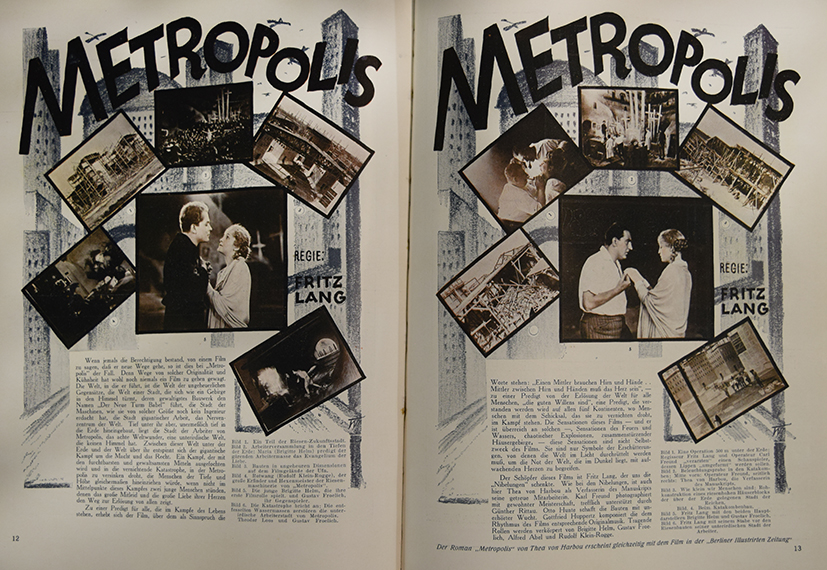 Nowadays Metropolis is one of the most loved films from early German cinema, praised strongly for its cinematography and spectacle. It is now seen as very important and influential, but when it was originally released it was one of the most controversial films in Ufa’s history. After the success of Fritz Lang’s Nibelungen films, Ufa decided to give free rein to Lang. Unfortunately, or fortunately as some might feel, this led to Metropolis’s budget spiraling dramatically out of control.[ix] The final production costs ended up equalling 6 million marks (six times over their original budget!). As a result, Lang was fired before filming even finished and the film was not received well by critics.[x] The financial investment had secured praise for the film’s marvelous visual and technical qualities, however, the simplistic and social content was severely criticised. It still proved to be popular with the American public, with thousands of people queueing outside cinemas to see it.[xi] However, ultimately, Metropolis was a failure: it was only able to recuperate 1/7th of what was originally spent on it. Ufa then almost went into liquidation, but Hugenberg, a powerful businessman, was then employed to save the company and he managed to change the course of Ufa’s history forever.[xii] 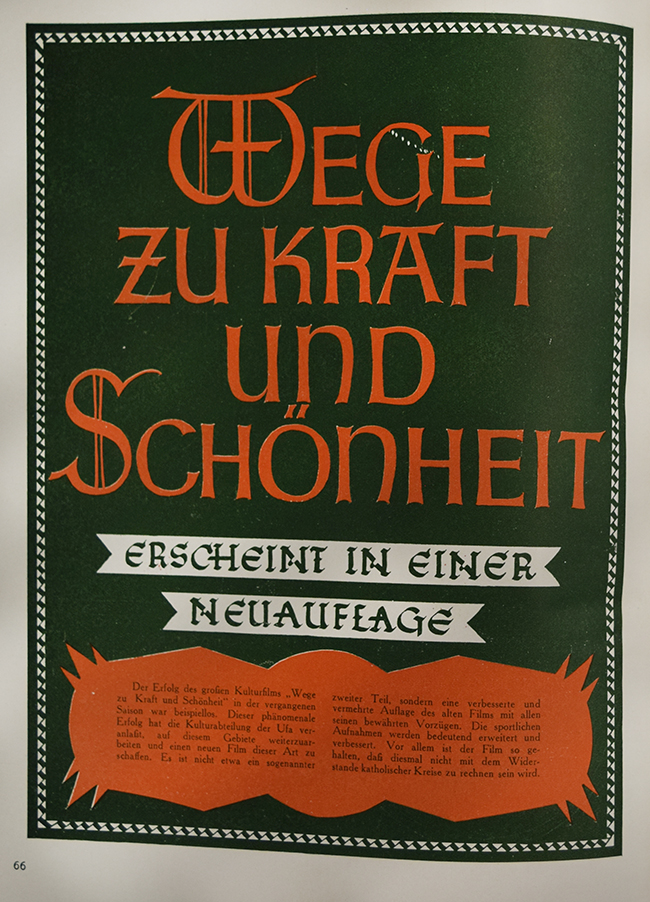 This is a particularly noteworthy film promotion from this campaign book, as it gives us an example one of Ufa’s Kulturfilme. These Kulturfilme were first created in 1918 and were originally created to be short German documentary films for medical personnel. However, they were so successful that by 1919 Ufa had already created 87 different Kulturfilme. With these short films, Ufa was able to offer cinemas with the complete cinematic experience. Ufa even went as far to petition the government to allow cinemas to gain tax breaks from screening such Kulturfilme. Wege zu Kraft und Schönheit was by far the most popular, promoting the body culture of its time. It was, in fact, even produced in multiple times to be marketed overseas.[xiii]

This campaign book can be seen as a testament to Hugenberg’s success at saving the failing company in just under two years. A measure he introduced to save the company was the ‘talking experiments’ (creating sound films) through a deal with Tri-Ergon sound. Although sound in film was not a recent discovery, it still had not been widely distributed for feature-length films. This experiment sadly marked an end to many silent film stars’ careers.[xiv]

Hugenberg also dramatically changed the landscape of cinema. He was right-wing and set in motion films that supported his ideologies, creating a political and societal impression which made it easier for Hitler to come to power in 1933.[xv]

Ufa was one of the most powerful production companies of its time: it had a degree of power that has sadly never been achieved since by a German production company in the post-war period.[xvi]