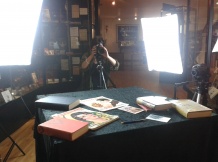 This year we are celebrating 20 years of The Bill Douglas Cinema Museum.

We would like to commission a student or group of students to make a short film inspired by the museum’s collections or the work of Bill Douglas.

The winning proposal will be given to £200 to help make the film, mentoring support from Filmmaker and Programmer David Salas and the opportunity to be screened at the 20th Anniversary event.

The museum contains over 75,000 artefacts covering over 300 years of moving image history and is the premier film museum in the UK.  It was founded from the collection of legendary filmmaker Bill Douglas, a director dedicated to the power of the image.

The museum’s galleries in Exeter, are free and open every day from 10am to 5pm.

The deadline for submissions of your proposal is Friday 6 October 2017.

Films must be able to be completed within 4 weeks of being commissioned.

We are expecting films to be between 3-10 minutes long but will consider each proposal on its own merits.

Contact Details, including Name, Email, Telephone, student number of all those in the group.

By submitting a film you are confirming that you have the right to submit and exhibit the submitted film.

You must have obtained all necessary permission for intellectual property within the film, including music and image licenses.

You will indemnify and hold harmless the screening organisation against all claims arising out of the exhibition and promotion of the submitted film.

Films must be no shorter than 1 minute and no longer than 15 minutes.

Films must be submitted digitally. We would suggest using Vimeo as a platform www.vimeo.com and allowing us to download the film.

There is only one prize.

There are no fees or payments relating to the screening of film(s) at the anniversary event, beyond the £200 given to assist filming.

The winner will be contacted by Monday the 9th of October at the latest.

The promotional images and information you provide may be used in publicity for the event.

We may use short excerpts from submitted films for promotional purposes related to the event.

These regulations are subject to change without prior notice, but we will always try and be fair.

You are happy for your details to be retained by the Bill Douglas Cinema Museum and Anniversary Event Associates.

Entering a film proposal implies you have read and agreed to these terms and conditions.

WE LOOK FORWARD TO RECEIVING YOUR PROPOSAL