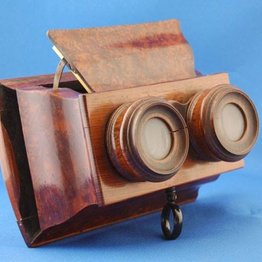 The first stereo viewer was patented by Charles Wheatstone in 1838, and this form of amusement remained popular until the 1930s. Stereocards were pairs of photographs mounted on a single card; when viewed through a stereoscope, they give a three-dimensional effect. Stereo transparencies were printed on translucent paper, and were coloured on the back, so that when they were viewed with a light source behind them they gave the impression of a colour photograph. In the second half of the twentieth century, the stereoscope saw a revival in the popular Viewmaster children's toys.

The collection contains over 1400 items relating to this form of 3D-imaging, including an extensive collection of images of the First World War.

View all stereocards in the collection