Toys involving animated images began to appear at the beginning of the nineteenth century. Scientists realised that a series of still images can be used to create the effect of a moving image.

For images to move they must be presented to the eye at the rate of at least 10 per second. There must also be a period of blackness between each of the images, so that they do not blur into each other. The brain forms a mental bridge between the two images, giving rise to the idea that the static images are actually moving. 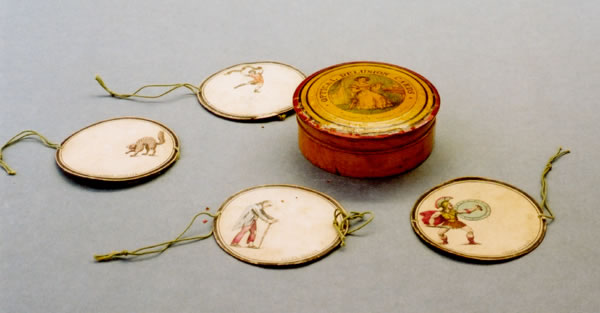 The Thaumotrope was first sold in 1826. It consisted of a disc with two pieces of string attached to it. When the disc was spun between the strings, the images on the back and front blended together to form a single picture. Popular images included birds in cages, circus performers and the encounters between dogs and cats. 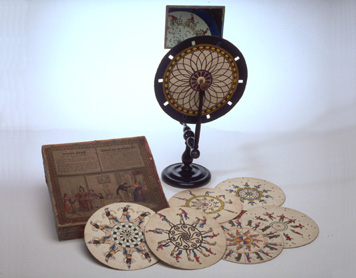 The Phenakisticope was invented in 1830. This toy had a disc carrying a series of images set in a ring around the circumference, with small slits between the images. When a rod was placed through the Centre of the disc, and it was spun in front of a mirror, a person looking through the slits from the back of the disc would see a moving image reflected in the mirror. The images used could either be abstract patterns or performers such as jugglers or acrobats. 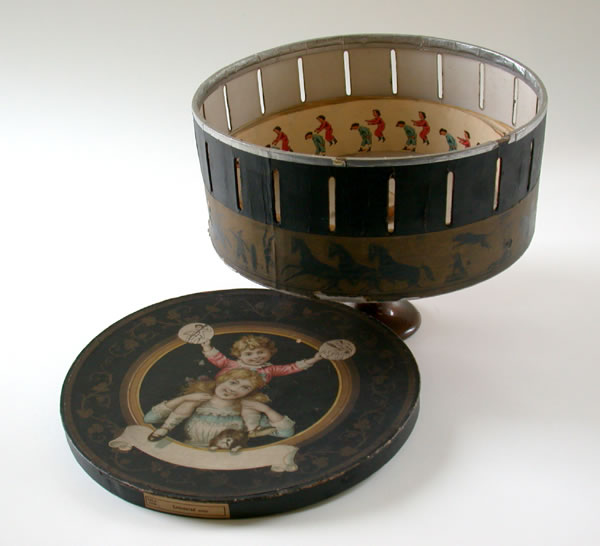 The zoetrope was invented in 1834 in England by William Horner but it didn't become popular until the 1860s when American developer William F. Lincoln patented and named it the 'zoetrope', meaning the 'wheel of life'.

The zoetrope worked on the same principles as the phenakistiscope, but the pictures were drawn on a strip which could be set around a metal drum, with slits cut into the upper section of the drum. The drum was mounted on a spindle so that it could be spun, and viewers could then look through the slits to see the cartoon strip form a moving image. Fast spinning of the drum would produce the smoothest image. 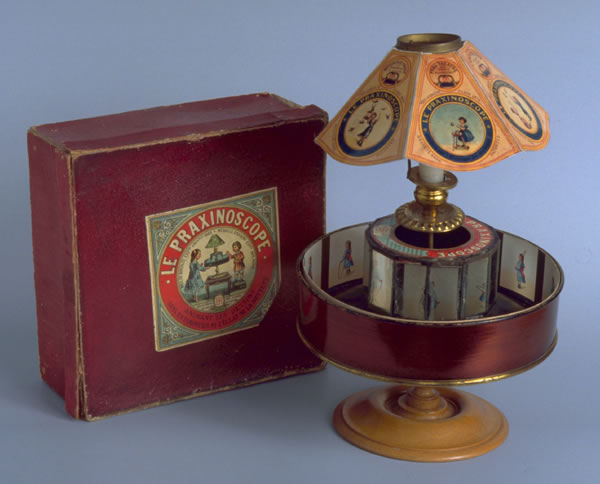 Both the zoetrope and phenakistiscope provided the break in the images by the black space between adjacent slits in the disc or drum. This design was adapted by Emile Reynaud in Paris in 1877 to form the praxinoscope. It used a drum, just as the zoetrope had, with the images drawn on a band placed around the inside of the cylinder. However, rather than having slits through which the images were viewed, the cartoon strip was reflected in a series of mirrors, mounted in a ring set halfway between the outer edge of the drum and the central axle. When the drum was spun, the viewer watched the progression of images in the mirrors. A candle set above the axle allowed the images to be seen more clearly.