The magic lantern was invented at some point in the middle of the seventeenth century, and is the oldest form of slide projector. At the front of the box, a condensing lens focuses the rays from the light source onto a slide. This slide carries the image to be projected. The second lens is set in front of the slide and ensures that a sharp version of the slide image appears on the screen (a sheet or plain white wall.) 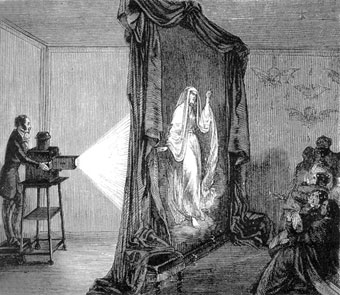 Early magic lanterns were commonly used in homes, but by the end of the 18th Century a special form of lantern show had developed. It was known as the 'phantasmagoria' (meaning collection of phantoms) and was made up of images of ghosts, skeletons and goblins.

The images were combined with sound effects of thunderclaps and explosions, and dry ice was used to create a smoky atmosphere. The ghost show that was produced thrilled or terrified audiences, forming a kind of precursor to today's horror films.

The magic lantern was a popular tool for travelling showmen during the eighteenth century; they would walk from village to village, telling stories and bringing news about the wider world.

The oldest lantern slides were painted by hand onto pieces of glass set into a wooden frame. At first they were simply black images, but soon colour was added to make them more interesting.