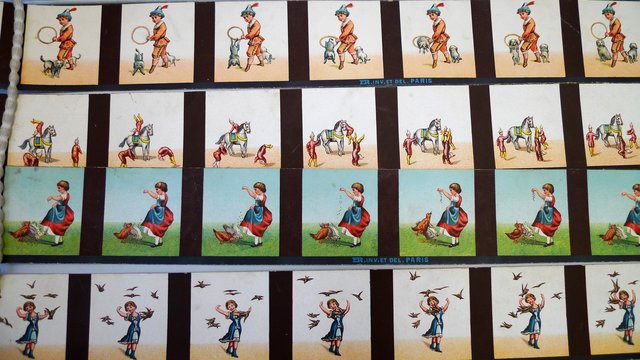 Here is a wonderful new illustrated blog on animated toys from stipend holder Dr Birgitta Hosea. Birgitta is an artist and academic who is a Reader in the Moving Image at the Animation Research Centre at the University of Creative Arts.

My own practice is in expanded animation, in other words, I am interested in ways in which moving images can be used in contexts other than the single screen film. As an artist this has involved me creating works inspired by technologies from the origins of animation such as shadow puppets, silhouettes, optical illusions, trotting horse lamps, spirit photography, stage magic, Pepper’s Ghost and peepshows. Because of this, it was thrilling for me to come to the Bill Douglas Cinema Museum Archive. Looking through boxes from their extensive collection of pre-cinematic optical toys at close range, I was struck by how tactile and intimate the experience of looking at them was and how these early printed materials anticipated the depiction of ways of moving through space that are commonly used today in animation. These short sequences felt like precursors to the animated gifs we see on web pages, interfaces, digital signage and, of course, Instagram.

Zoetrope images (EXEBD 69112). These late nineteenth century optical toys used images that gave the impression of motion. Here, as with other toys from the time, racial stereotypes are used. 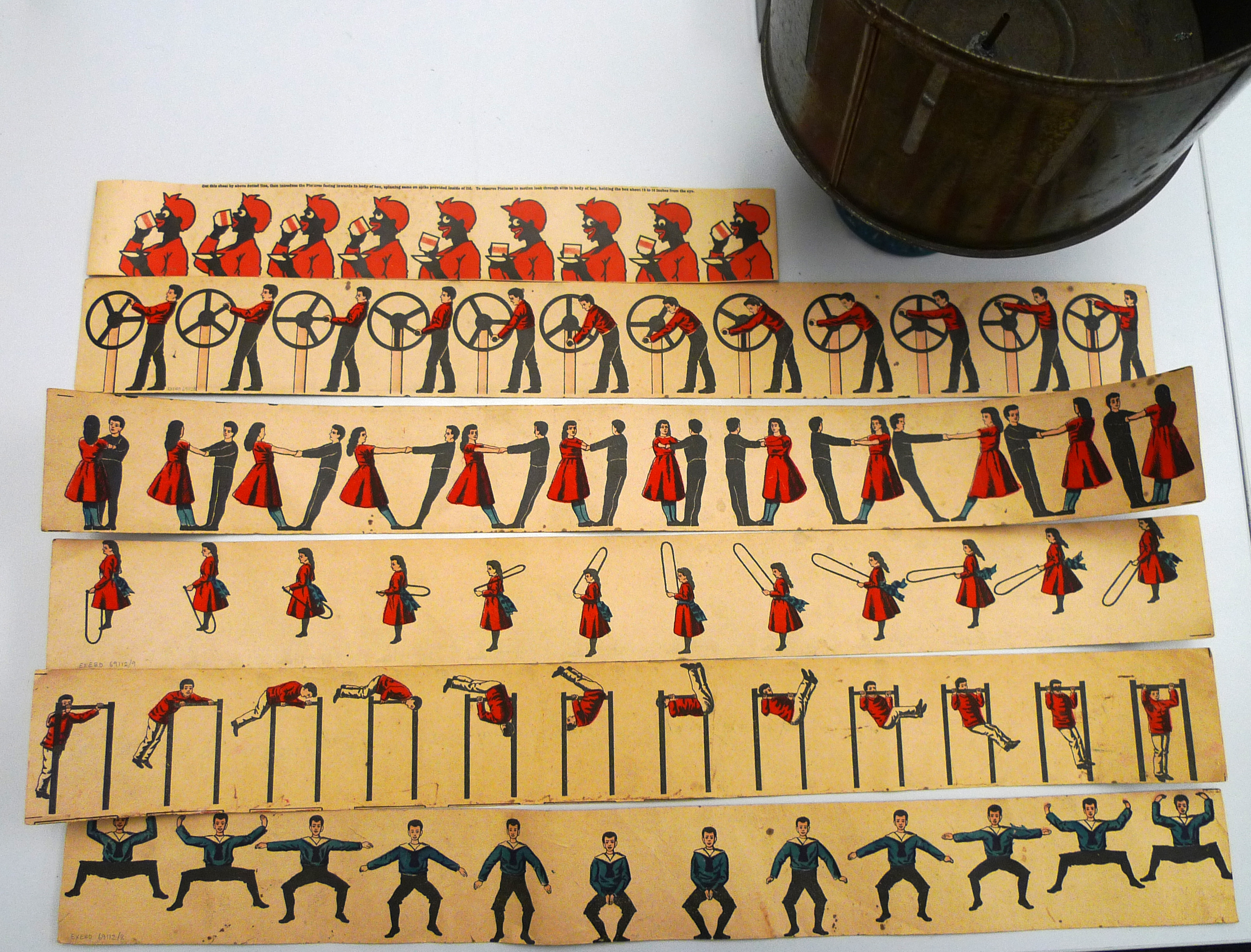 Optical toys have also been an inspiration to a group of contemporary animators from China who call themselves the Feinaki Animation Gang and are inspired by their study of the phenakistoscope to create amazing short micro-animations that are designed to continuously loop. The group first formed in 2015 to create inventive animated gifs that celebrate public holidays such as Valentine’s day. The artists include my former student, CAI Caibei, and other noted practitioners such as WEI Shilei, AMAO, CHEN Chen, CHEN Lianhua, InkeeWang, LUO Sijia, SANGSUN, SUN Xin,Toyoya, WANG Dan, XIANG Yao, YU Kun, ZHU Yantong. They have just exhibited their works at the Shanghai MoCA Pavilion in a show called Stroll the Line in May 2019. More info here: Stroll the Line exhibition.

Poster for Stroll the Line 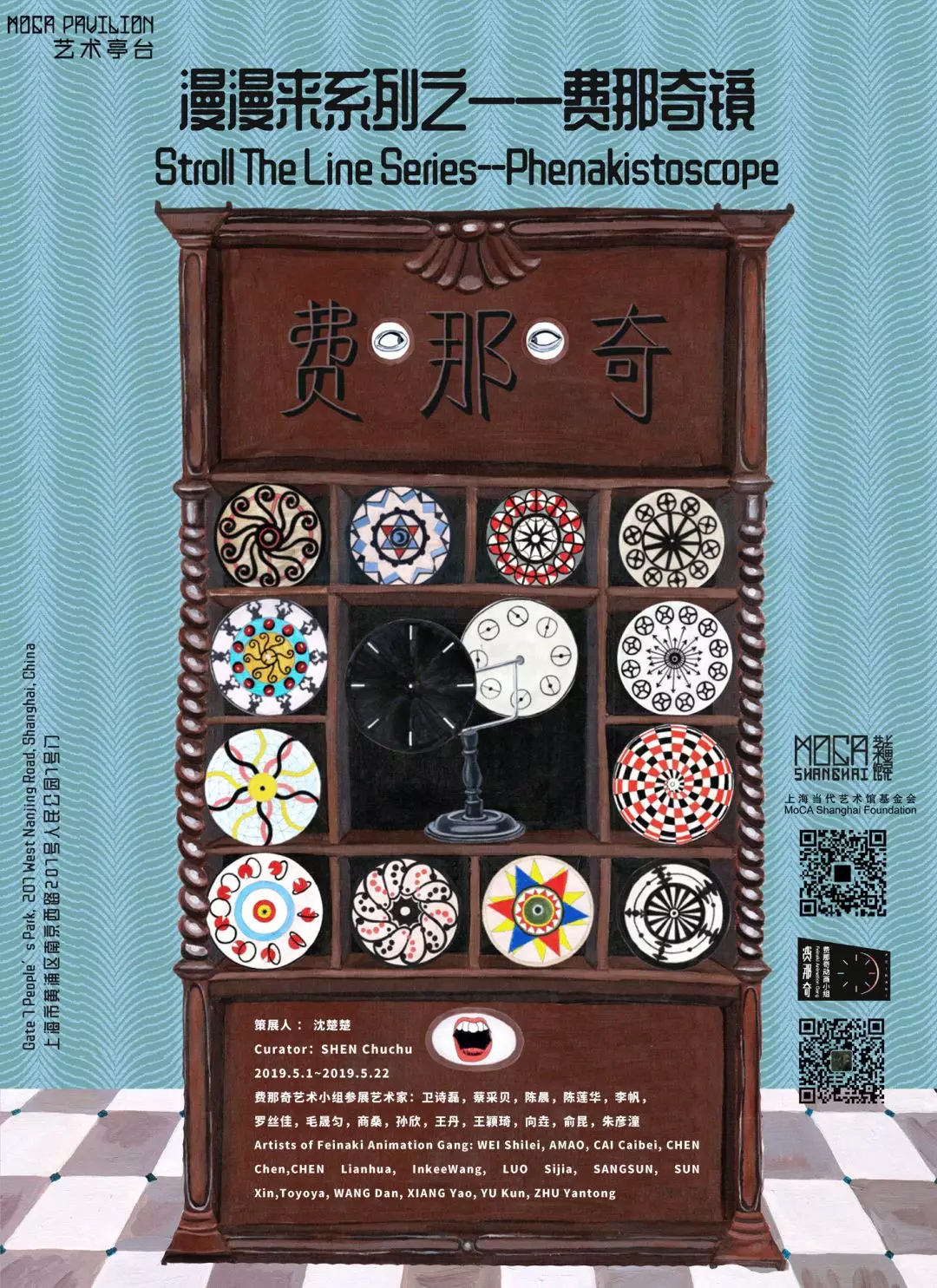 Several media theorists have also made connections between early mechanical optical illusions and our contemporary digital media. Shane Denson and Julia Leyda describe the way that we view digital moving images on a variety of different devices as post-cinematic. No longer recorded through analogue celluloid and projected at cinemas, the moving images we consume today are ‘essentially digital, interactive, networked, ludic, miniaturized, mobile, social, processual, algorithmic, aggregative, environmental, or convergent’ (Denson & Leyda, 2016). Alongside a variety of new transmedia viewing platforms such as computers, phones, tablets, games consoles and even giant screens on the sides of skyscrapers, new forms of moving images have emerged to be displayed on them. Making a comparison between these and the early short films of silent cinema, Ruth Meyer considers that while early silent films were short because of technological restrictions, nowadays brevity is part of the digital media we consume – the short film, the tweet, the meme, the status update, the text message. Because of their shortness, she calls these ‘micro-narrative’ formats (Meyer, 2016). 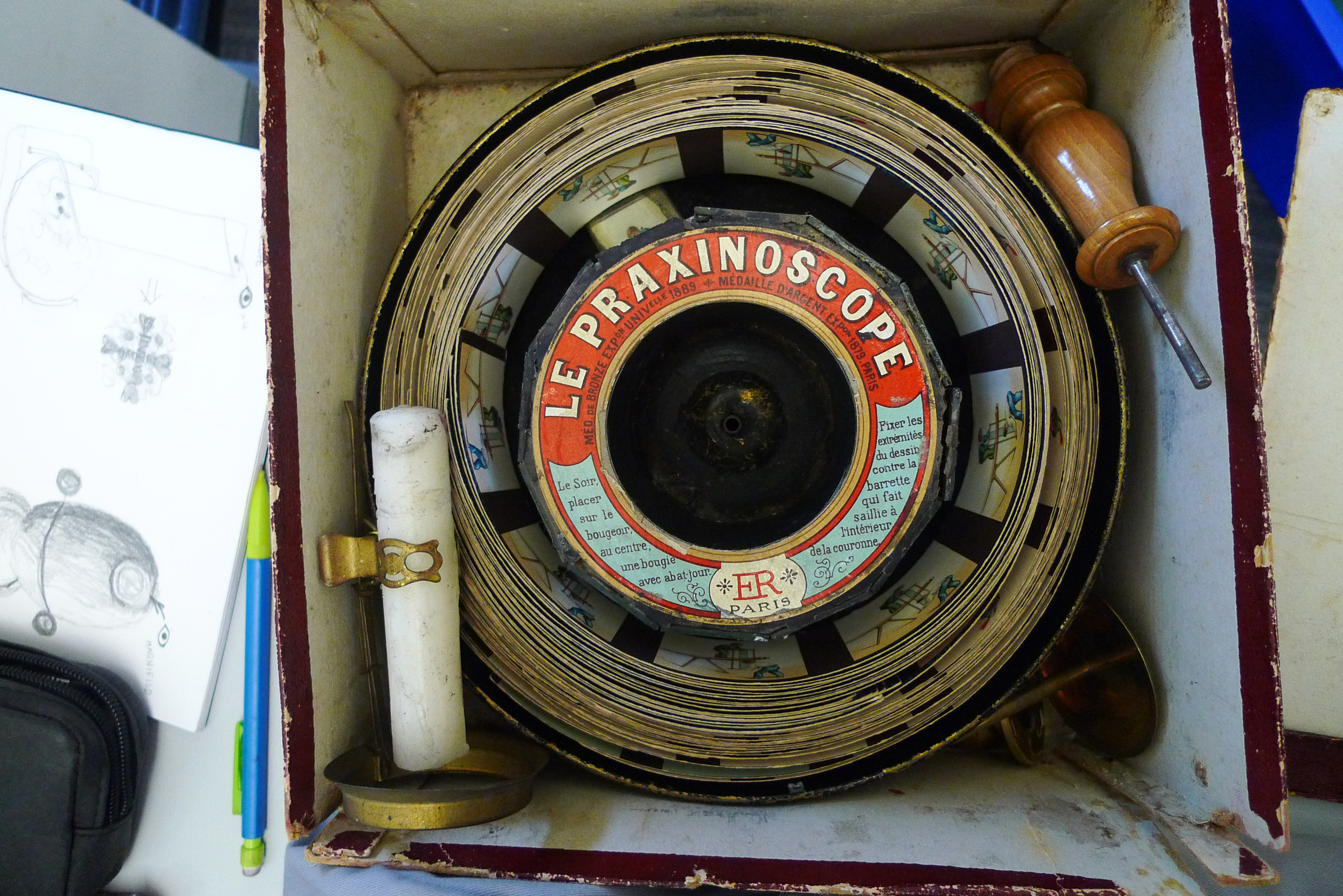 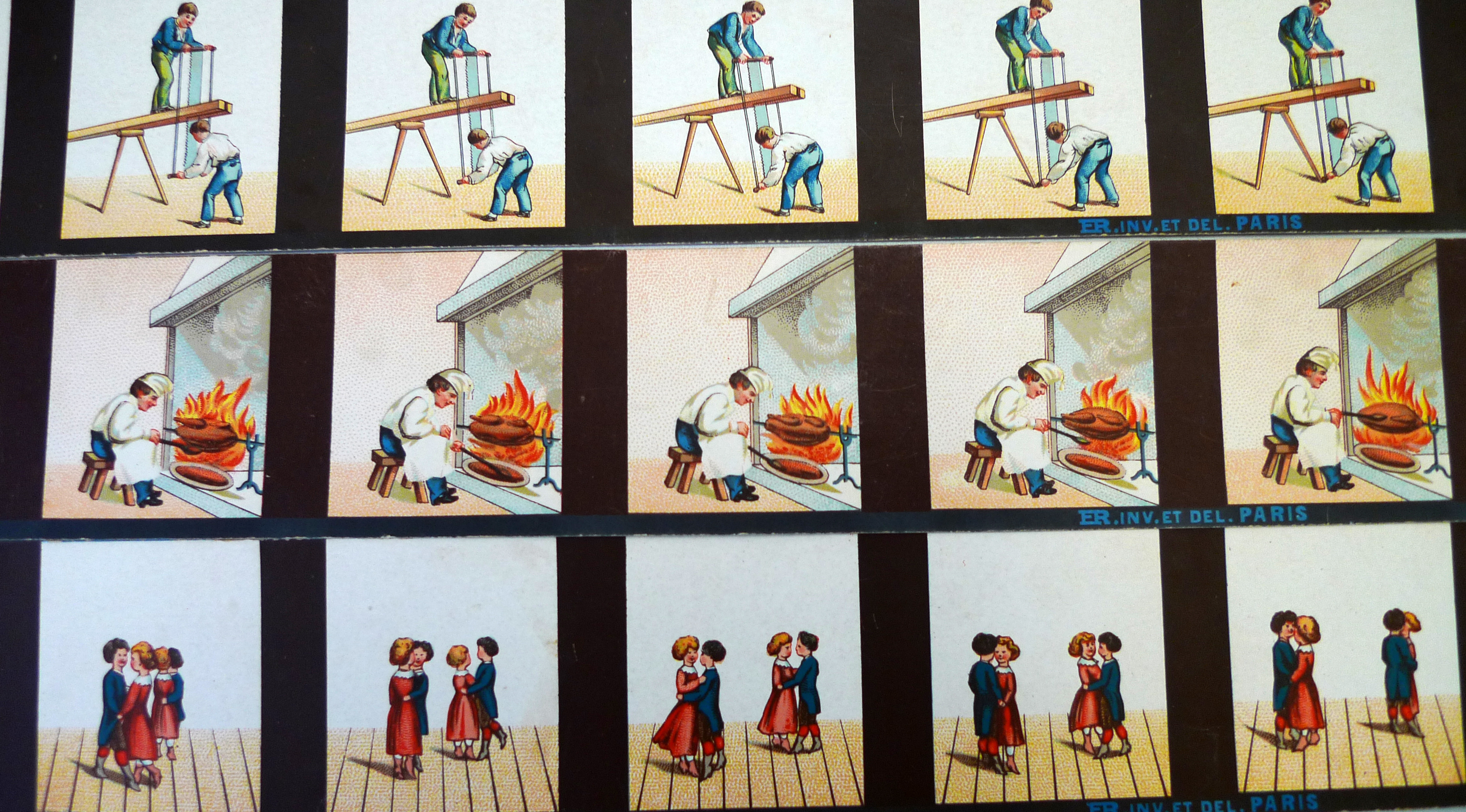 Looking at the paper strips from Émile Reynauld’s Praxinoscope (1889) there are also short ‘micro-narratives’: series of images that animate scenes from the circus – tightrope walking, juggling knives or weights, acrobatics with horses or dogs; or scenes from children’s play – blowing bubbles, skipping, a girl fishing, a baby eating, a fancy cat plays double bass; and even scenes from everyday work, leisure and sports – swimming, horse riding, dancing, feeding chickens, pumping water, sawing and cooking meat on a spit. All of these sequences of images capture bodies and matter in motion through illustration, before the cinema had even been invented. They do not take the form of stories, but are more like circus acts or fairground attractions.

Not only are the movement sequences on these devices short, but they are designed to be repeated. Colourful patterns on spinning tops, for example, continue spinning to create an optical illusion of merged colours until the force of momentum runs out. Lev Manovich points out that pre-cinematic optical devices were based on manually constructed, hand-painted loops of repeated image sequences. He finds in these earliest animated pictures a precursor to contemporary digital media and also to computer programming that involves looped and iterative instructions. (Manovich, 2016). Building on Manovich’s ideas, Nicolas Dulac and André Gaudreault point out that optical toys are based on not only repetition and brevity, but also rotation. For them, the endless loops of these animated drawings have no sense of time, just endless presence. Like a cog in a machine, they have a mechanical rather than human sense of time (Dulac & Gaudreault, 2006).

Like these toys, the earliest silent films were also built on short acts, gags, tricks or views from everyday life. Connecting them with the ‘attractions’ on show at the fairground, the circus and the music hall, Tom Gunning has named the earliest silent films (pre-1908) ‘the cinema of attractions’: a cinema concerned with spectacle, exhibitionism and quick thrills rather than storytelling (Gunning, 2006). Whereas this period of film history is related by Gunning to popular performing arts, Dulac and Gaudreault argue that optical toys from 1830-1900 are another form of media that pre-date cinema and should also take their place as a key influence on the cinema of attractions (Dulac & Gaudreault, 2006). While this may seem an obvious connection to make, surprisingly enough, in his extensive research on the origins of animation in the UK, Malcom Cook has not found any direct evidence to connect the type of animated pictures seen in optical toys with early animation (Cook, 2018)

While this may be the case, what I personally found fascinating about having the chance to examine the collection of optical toys at the Bill Douglas Cinema History Archive at first hand, was how the types of motion represented anticipated the kinds of ways in which we animate today. I was also struck by the manner in which movement was depicted in a static printed form.

Consequently, I devised a workshop called ‘Animated Loops: From Print to Instagram’ for BA Illustration and Animation students at the University for the Creative Arts, Canterbury, who work in both design for print and animation. It was part of a First Year unit, led by artist and animator Molly Okell to introduce students to animation. We began with a lecture showing photos and discussing my findings from the research at the Bill Douglas Cinema Archive, in which I identified the following types of animation:

View through diorama peepshow when held up to the light 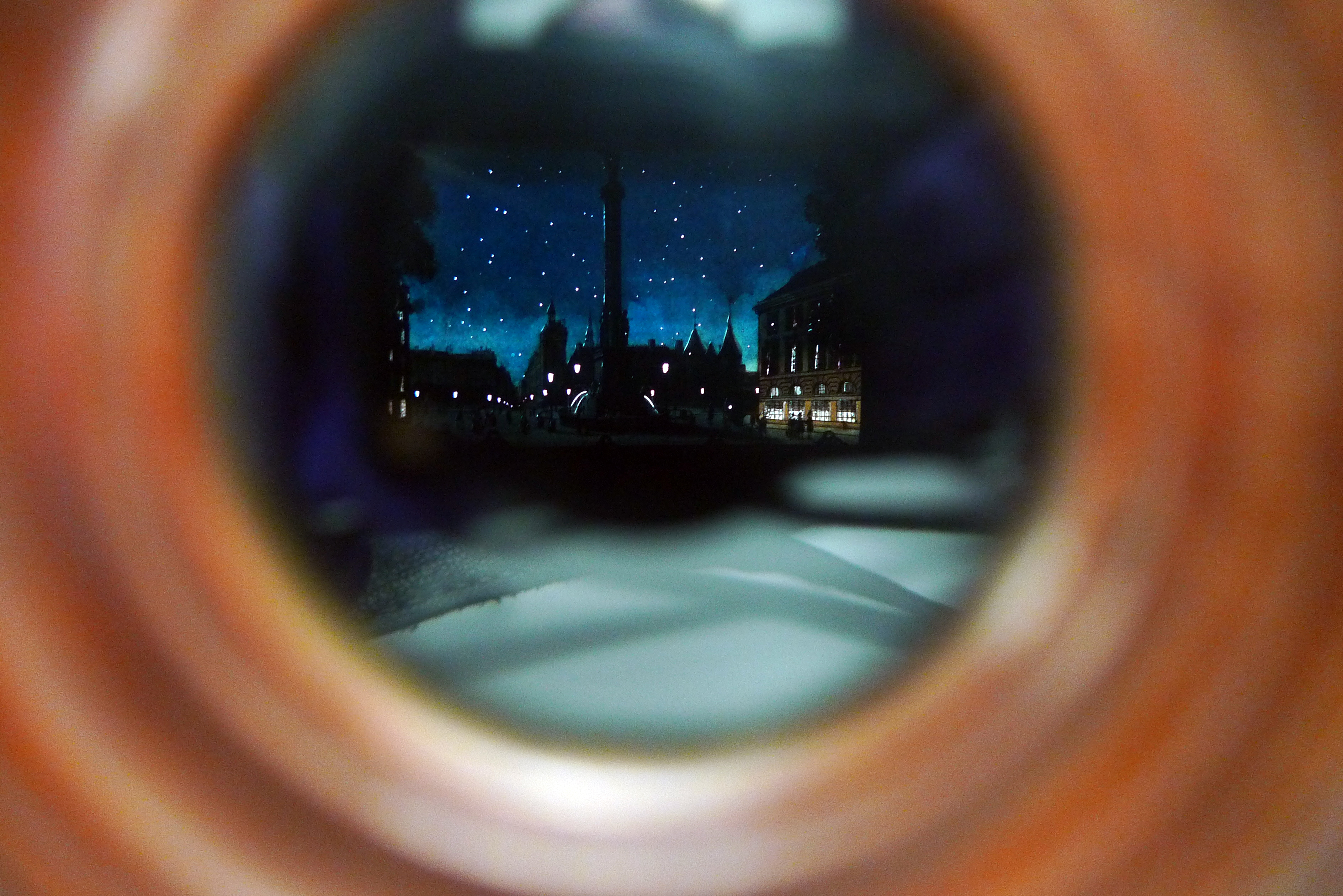 Cardboard fold-out telescopic view of Great Exhibition, 1851 (EXEBD 48540) and view through its peephole. 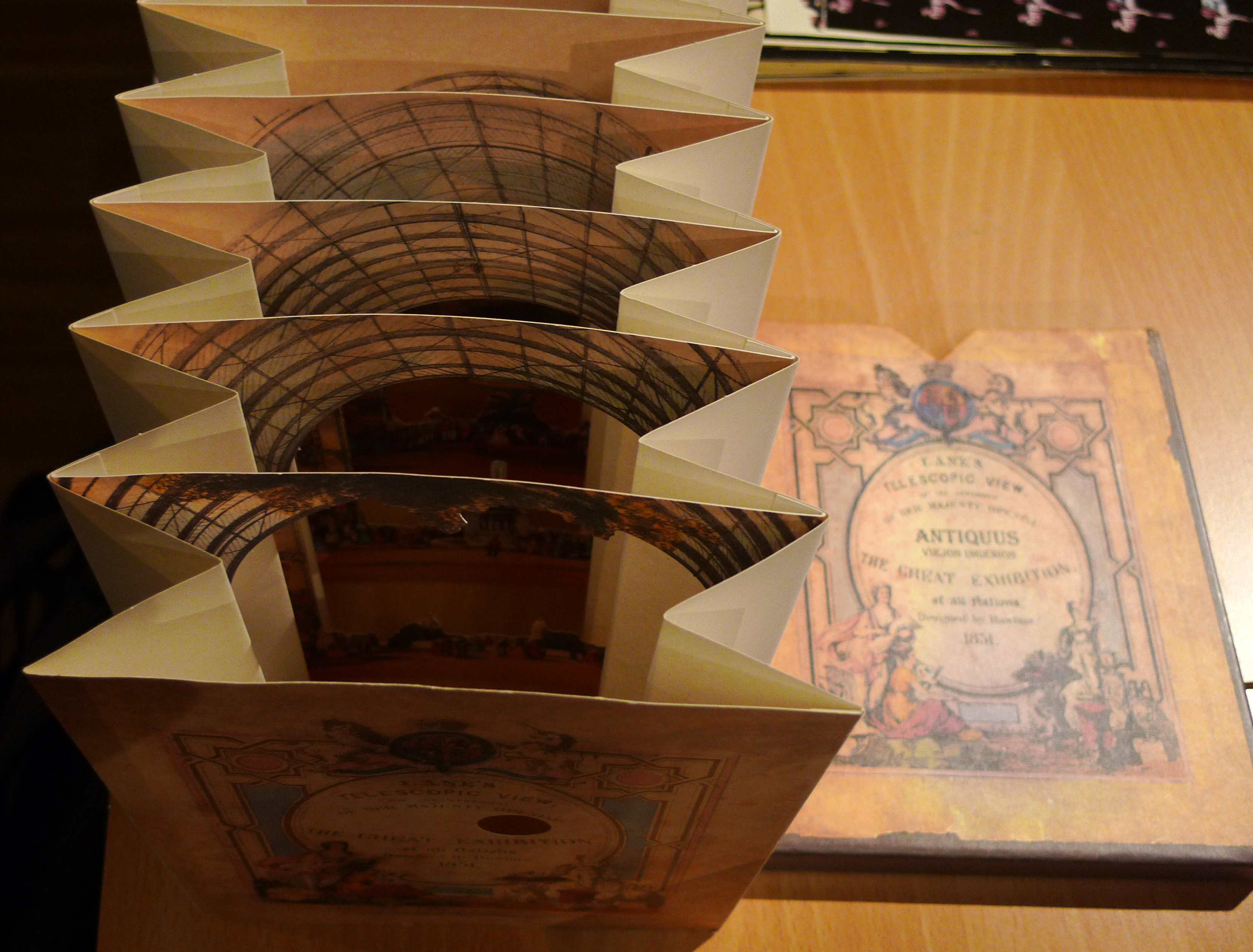 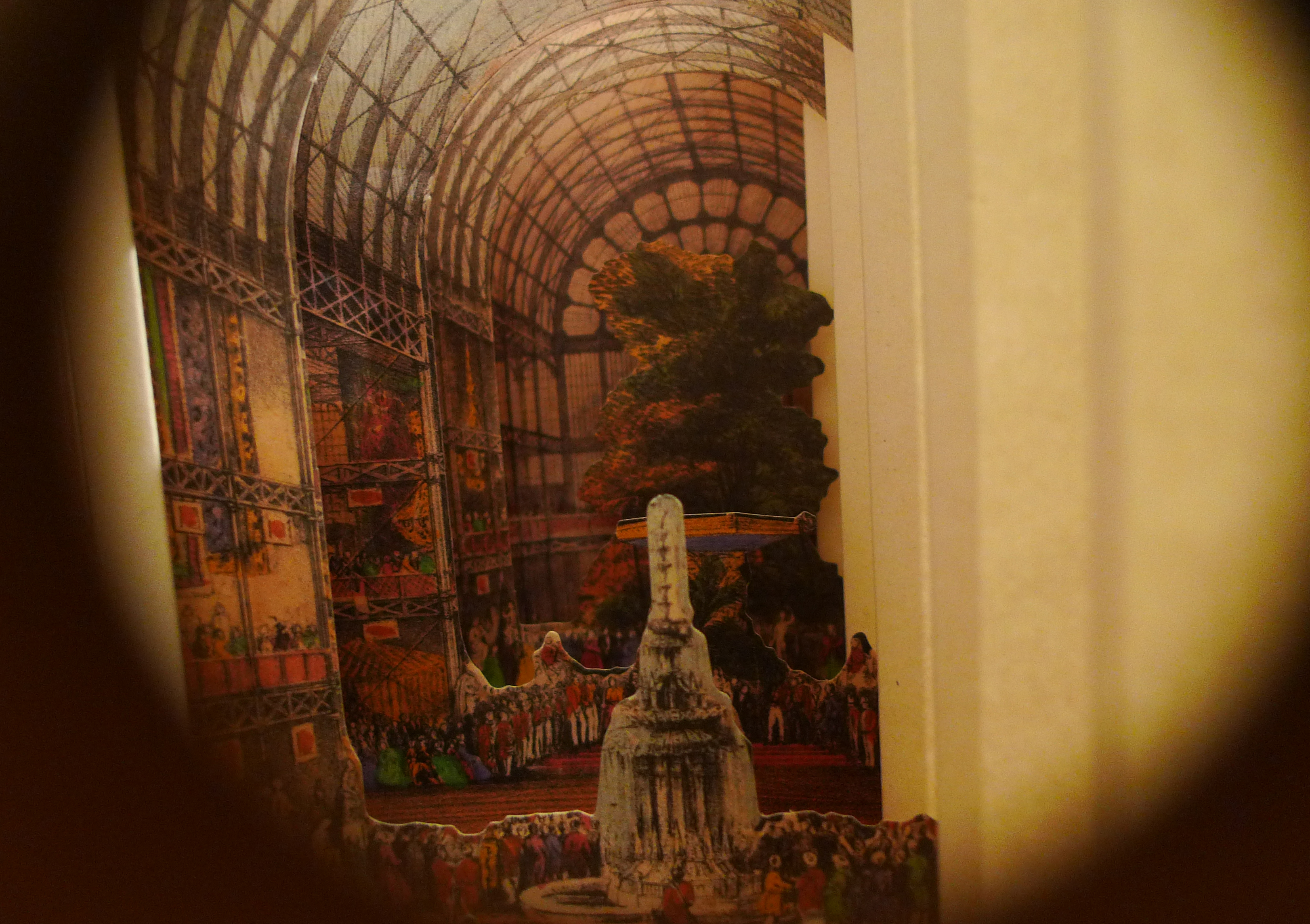 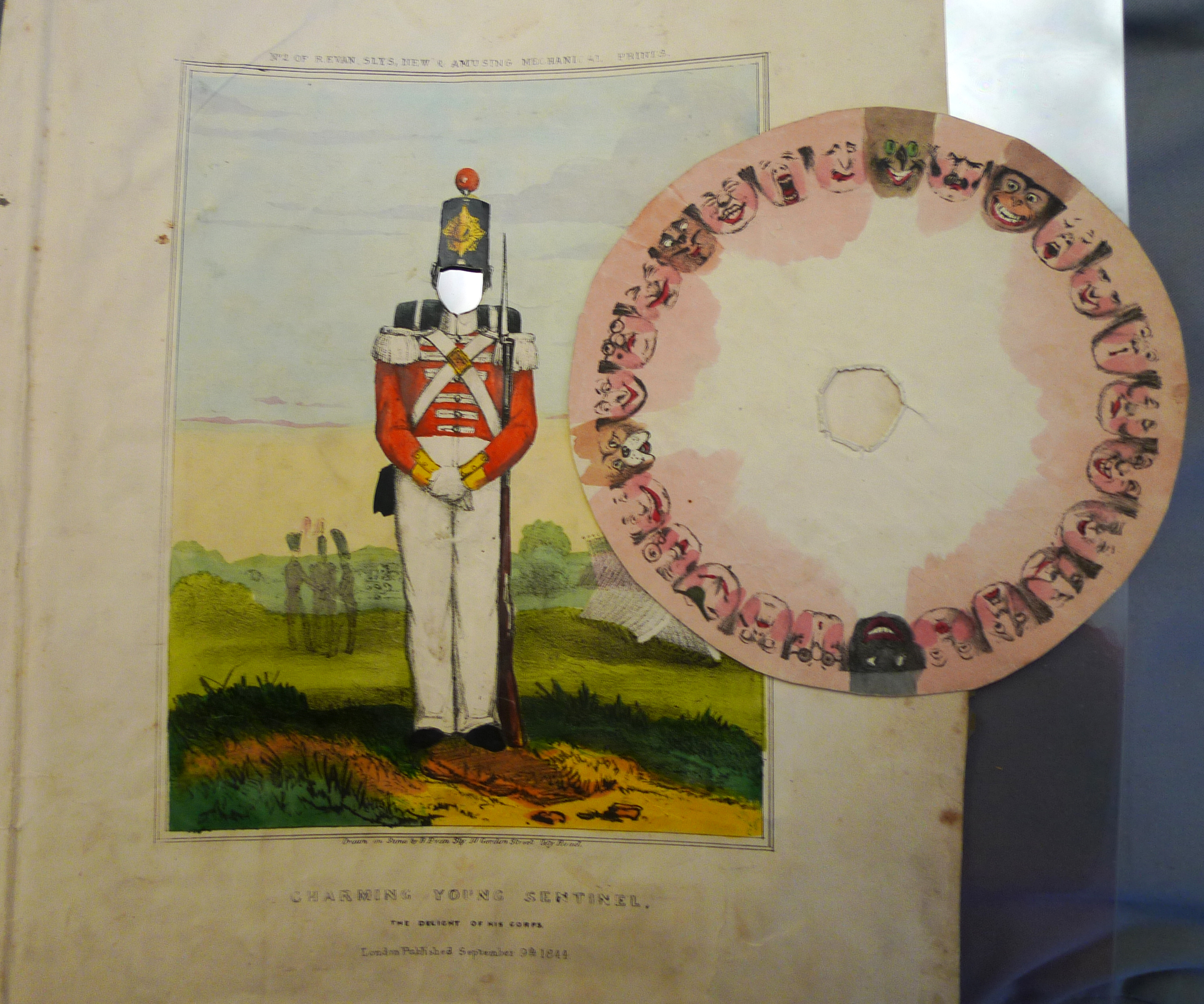 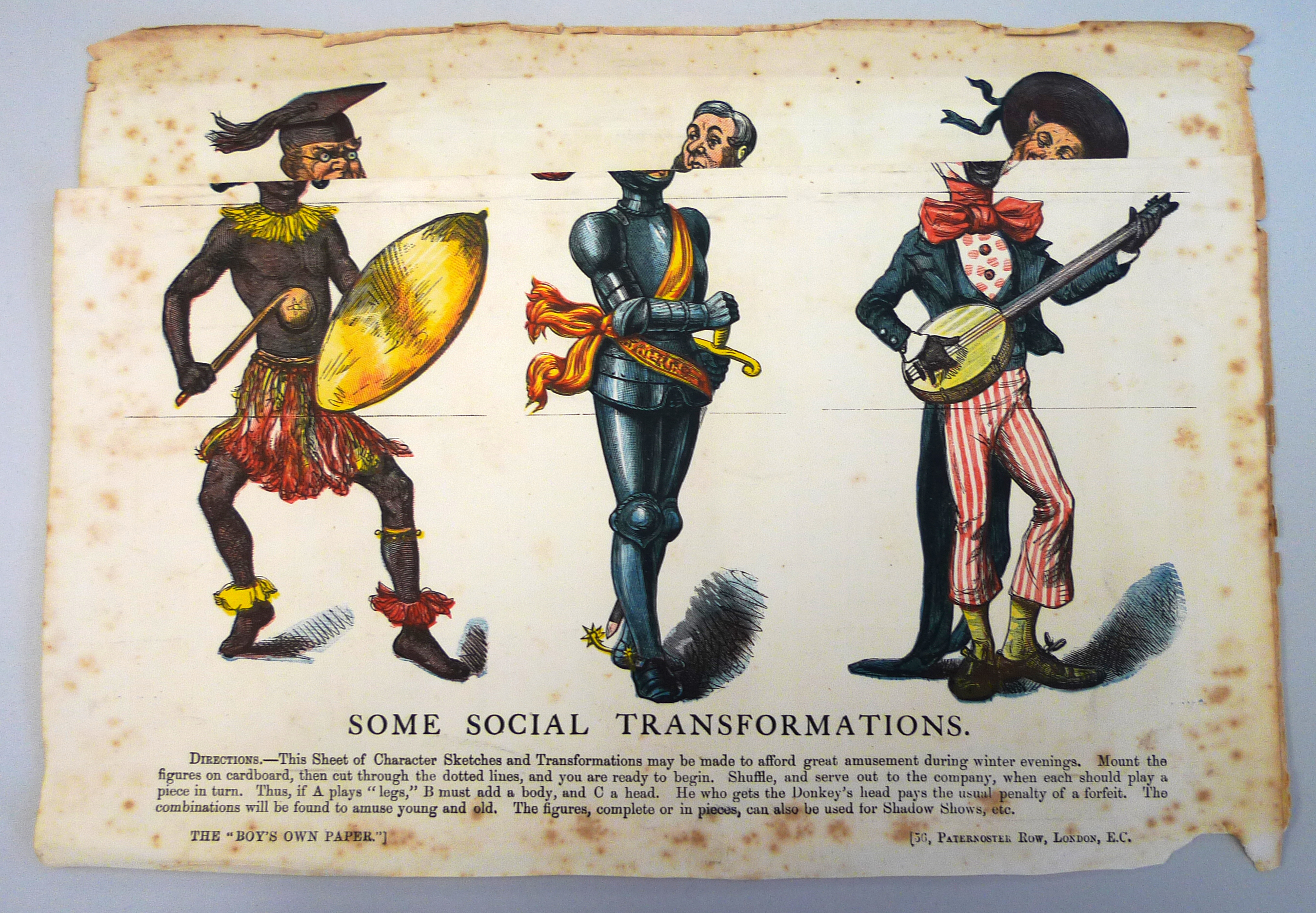 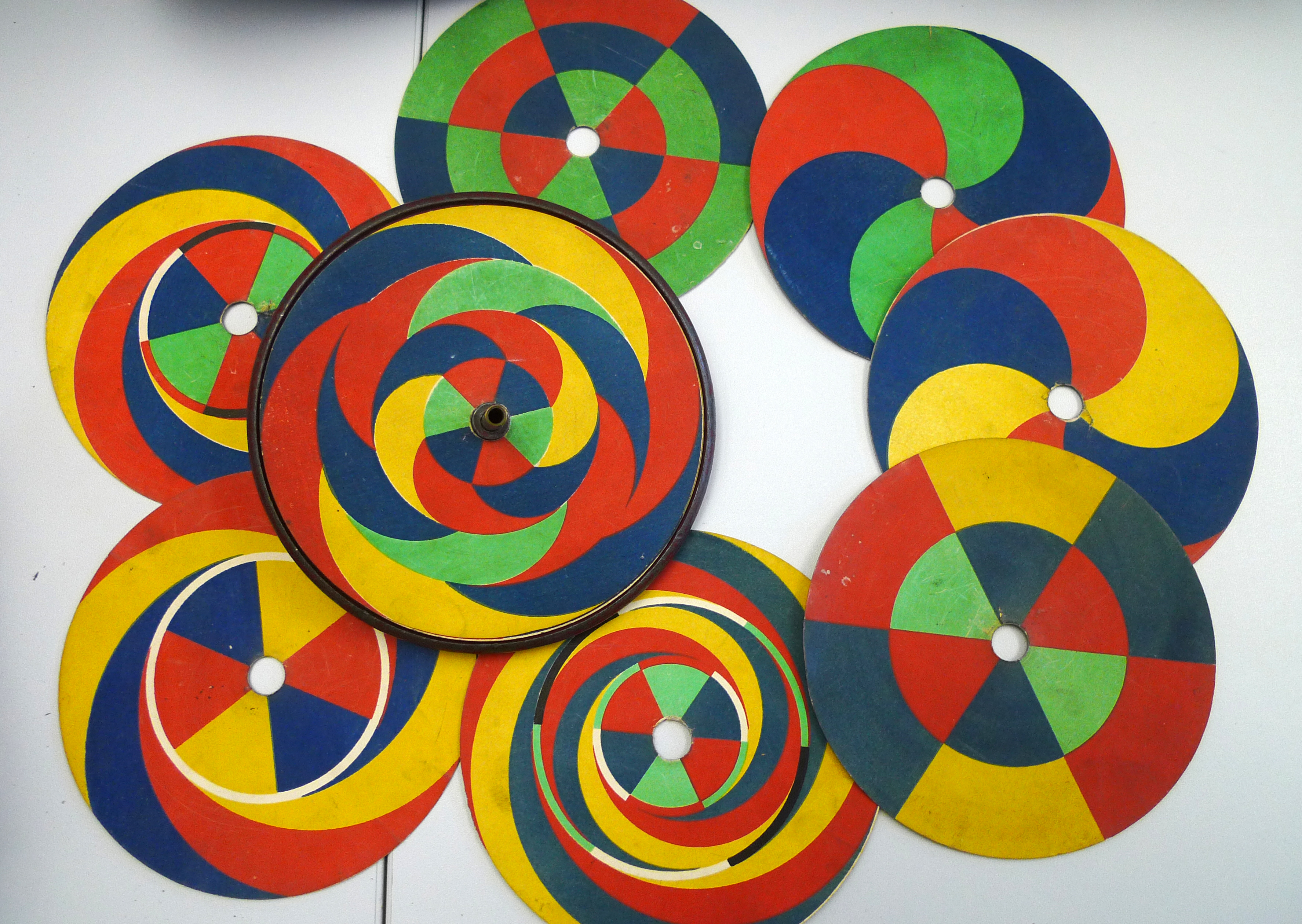 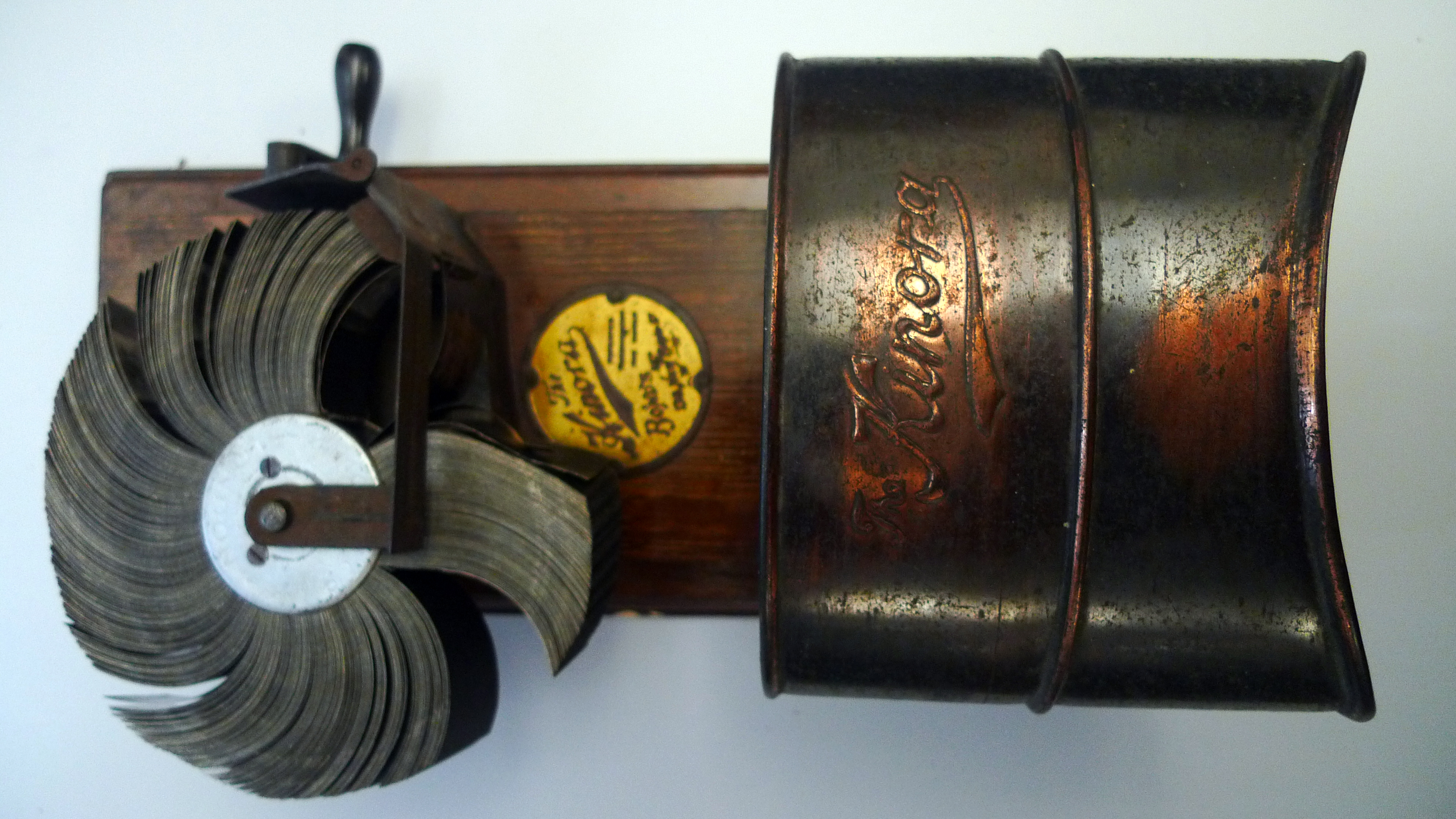 After the lecture, we went into the computer lab for a practical workshop about how to make animation in Photoshop and produce a short animation that could be put on Instagram. We only had a limited amount of time, but here’s what some of the students had produced by the end of the morning. These animations by University of the Creative Arts students include flashing images. These works are by:

Dulac, Nicolas, and André Gaudreault. “Circularity and Repetition at the Heart of the Attraction: Optical Toys and the Emergence of a New Cultural Series.” In The Cinema of Attractions Reloaded, edited by Wanda Strauven. Amsterdam: Amsterdam University Press, 2006.