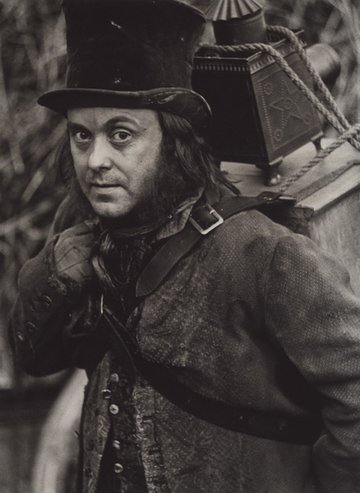 On Saturday 29 April at 2pm there will be a chance to see Bill Douglas's masterpiece, Comrades, in Exeter. The film, which tells the story of the Tolpuddle Martyrs, will screen at Exeter Phoenix's Studio 74 cinema and you can book tickets here.

The screening will be introduced by Bill's friend, collaborator and fellow collector, Peter Jewell, who also acted as researcher and script editor on the film. Peter will be in conversation with the Curator of The Bill Douglas Cinema Museum, Phil Wickham. The film uses many pre-cinema devices in Bill and Peter's collection through the character of the lanternist, played by Alex Norton in 13 different guises, to underline the film's theme of new ways of seeing the world.

Bill called the film 'A Poor Man's epic' and it's a film of astonishing beauty and power. Star actors (Robert Stephens, Vanessa Redgrave and James Fox among them) were cast as the bastions of the establishment, while unknowns were cast as the martyrs and their familes, although several have gone onto become well-known names and faces such as Imelda Staunton, Robin Soans, Phil Davis and Keith Allen.

We look forward to you joining us on the 29th.

Photograph of Alex Norton as the Lanternist is the copyright of David Appleby.