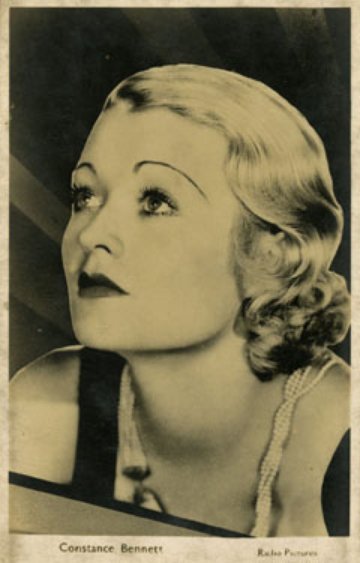 On hearing the name ‘Bennett’ in connection with classical Hollywood stars, people would most likely visualize the actress Joan Bennett, but would find it hard to remember her older sister, Constance, who was the bigger star in the 1930s. There are very few films which Constance Bennett is famous for today, with possibly the exception of the comedy Topper (1937), in which she plays a ghost alongside Cary Grant. In her review of Topper, Pauline Kael recommends watching this particular film in order to recognise the extent of Constance Bennett’s appeal in the 1930s (Kael, p. 609). In 1931 Constance Bennett was second only to Garbo in terms of popularity and was regarded as the “embodiment of glamour on and offscreen” (Ringgold, p. 472). However, as Bennett herself said: “I was no Sarah Bernhardt” (Ibid., p. 490). What, then, could have been the reason for her appeal in the 1930s, and why was it so short lived? What made Bennett at one time one of the best paid actresses in Hollywood? With the help of the items in the collection, I would like to ascertain Bennett’s allure as a Hollywood star by examining her star persona .

When examining the material on Constance Bennett in the Bill Douglas Cinema Museum collection, I found a large number of cigarette cards and publicity shots from the 1920s and 1930s, a booklet on Bennett’s life story from 1932, some articles in film and fan magazines, as well as press books of two 1930s films. Bennett’s star persona consisted of a number of attributes which were accentuated by her roles and offscreen lifestyle. Studio boss Sam Goldwyn first noticed her famous “poise, deportment and general appearance” (Picturegoer, p.11) in 1925 and was eager to sign her. The words ‘glamour’ and ‘sophistication’ seem analogous to her persona, as they are frequently mentioned in the collection’s fan magazines and her sister Joan Bennett’s autobiography. Fans raved about her “elegance, perfect manners and personality” (Ibid.). There is a photograph in the collection from the high-class magazine The Sketch which exemplifies these traits: 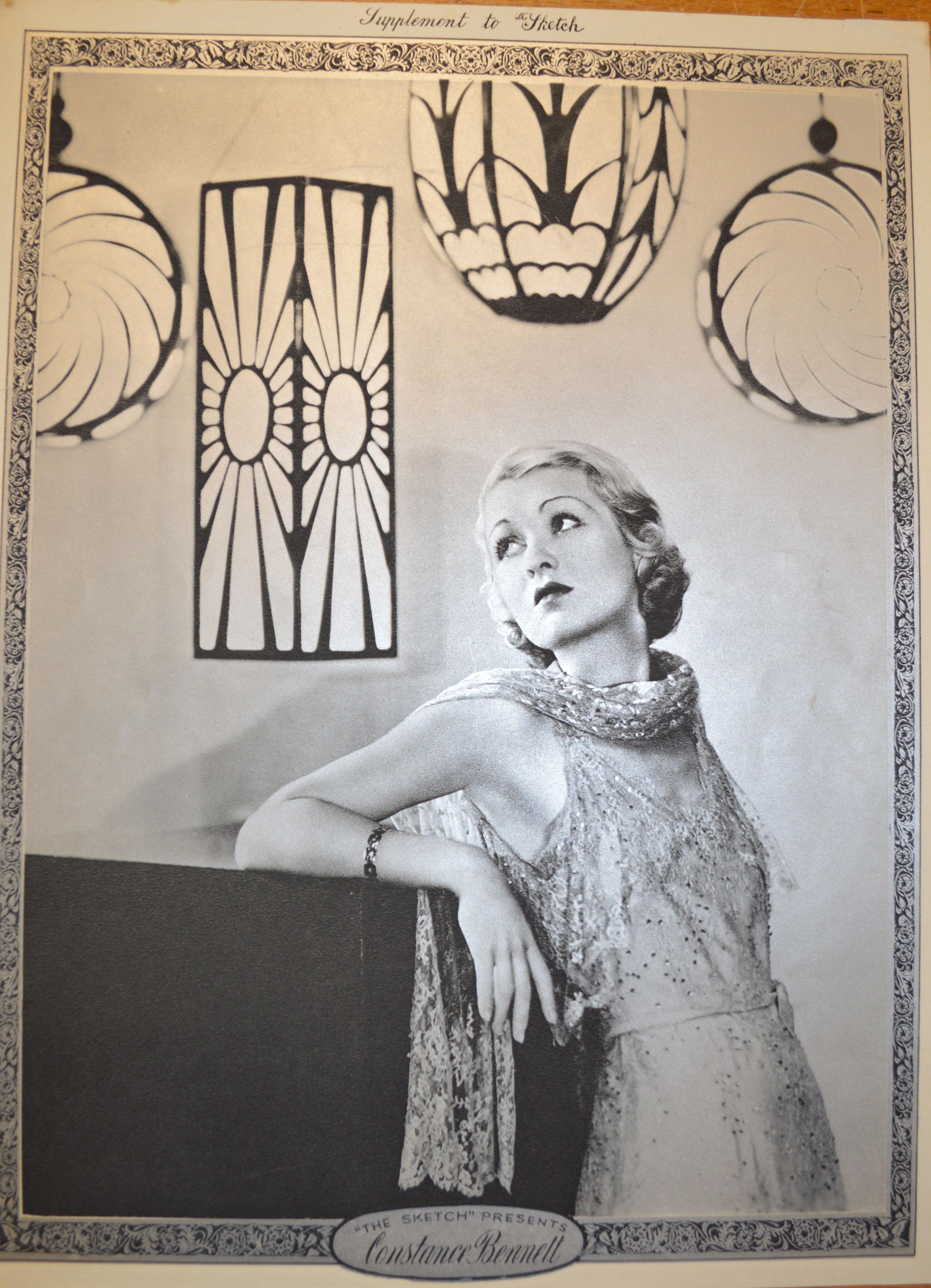 Bennett’s rather superior glance upwards and the casual way in which she drapes herself over the chest display her sophistication and comfort with her surroundings. The positioning of the Art Deco lamps in the top part of the photograph serves to emphasize Bennett’s small stature, while the lamps, together with Bennett’s elegant gown and carelessly slung matching scarf highlight her ease with up-to-date 1930s fashion and style.

Bennett’s glamorous appearance perfectly fitted her love of a vibrant and opulent lifestyle. The collection holds a booklet, published in 1932 and describing the life of Bennett, which is filled with anecdotes about her entanglements with various rich and famous men and their extravagant lifestyle (McBride). As the behaviour of a classical Hollywood star offscreen contributed hugely in shaping their overall persona, the fact that Bennett married five times and frequently abandoned Hollywood to live a luxurious lifestyle in Europe, was important for shaping her appeal as a woman of style and money. Bennett’s offscreen persona is readily transferred to her roles in the 1930s, in which she often portrayed sophisticated women, if not always rich; in The Easiest Way (1931), a photographer remarks on Bennett’s character’s elegant demeanour which belies the fact that she comes from a working-class background. In Ladies in Love (1934) she is the poor but sophisticated lover of a rich older man, distinguishing herself from the other two poor ladies by her wit and elegance. In the still below showing the female leads in the film, Constance is on the right. 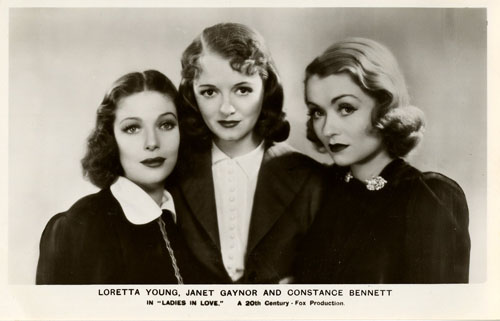 Bennett’s persona stands out because of its unusual combination of looks and demeanour. Her petite stature and feminine appearance were regarded as those of an “ideal fairy princess, shining, sophisticated and glamorous” (McBride). Bennett, however, contrasted this with more ‘masculine’ behavioural characteristics, such as aggressive determination (McBride) and a quick temper, linked with a shrewd business acumen (Ringgold, p. 482). Could this seemingly unusual combination have contributed to the success of her star persona by making her stand out from other actresses of the time? When Bennett’s sister, Joan, became an actress, producer Sam Goldwyn criticised her lack of the “Bennett fire” that had characterised Constance’s persona (Bennett and Kibbee, p. 202). Furthermore, as Bennett liked being in charge (McBride) and resented being bound to a studio contract, she alternatively went freelance or managed to procure beneficial contracts for herself when working for a studio. She clashed with the press numerous times and was often involved in court cases, sueing newspapers or being sued. Could this aggressive and ‘masculine’ trait, however, have worked as a double-edged sword, demonstrating the “Bennett fire” (Bennett and Kibbee, p. 202) that Goldwyn found so inspiring, but also possibly contributing to the decline of her career as a leading lady?

Although her father was a famous stage actor, Bennett’s acting skills have never been at the forefront of her star persona, and she never considered herself a “great actress” (McBride).  It has been said that she “wore clothes better than she acted” (Ringgold, p. 472), and that her offscreen persona was more important than her “mediocre films” (Ibid.). Her roles in the 1930s consisted mostly of ‘fallen women’, poor women marrying rich, or upper class eccentrics. The collection holds a press book of the screwball comedy Merrily We Live (1938), in which she is the member of a rich and eccentric family and which, together with Topper, revived her failing acting career in the late 1930s for a short while. The film foregrounds Bennett’s glamour by the provision of a sumptuous wardrobe that she changes frequently. She uses her famous “husky Tallulah-like voice” (Picturegoer, p.12) to drawl witty repartees and is alternately rude (albeit wittily) or tempestuous, elegantly performing the pratfalls expected in a screwball comedy.

Why did Bennett’s star fade? Her restless energy might have contributed to this, as she alternately appeared in B movies in the 1940s, started her own cosmetics and fashion label and fronted a radio show in which she shared gossip and fashion tips. The 1950s saw her on the stage and in a nightclub act. In 1965, she played her last film role in Madame X. The collection holds a few articles on this film, as well as the announcement of Bennett’s death, which occurred soon after. The comment on her ‘ageless elegance’, her specialising in portraying ‘haughty society women’ and her marriages demonstrate that Bennett’s persona was still effective in the 1960s. 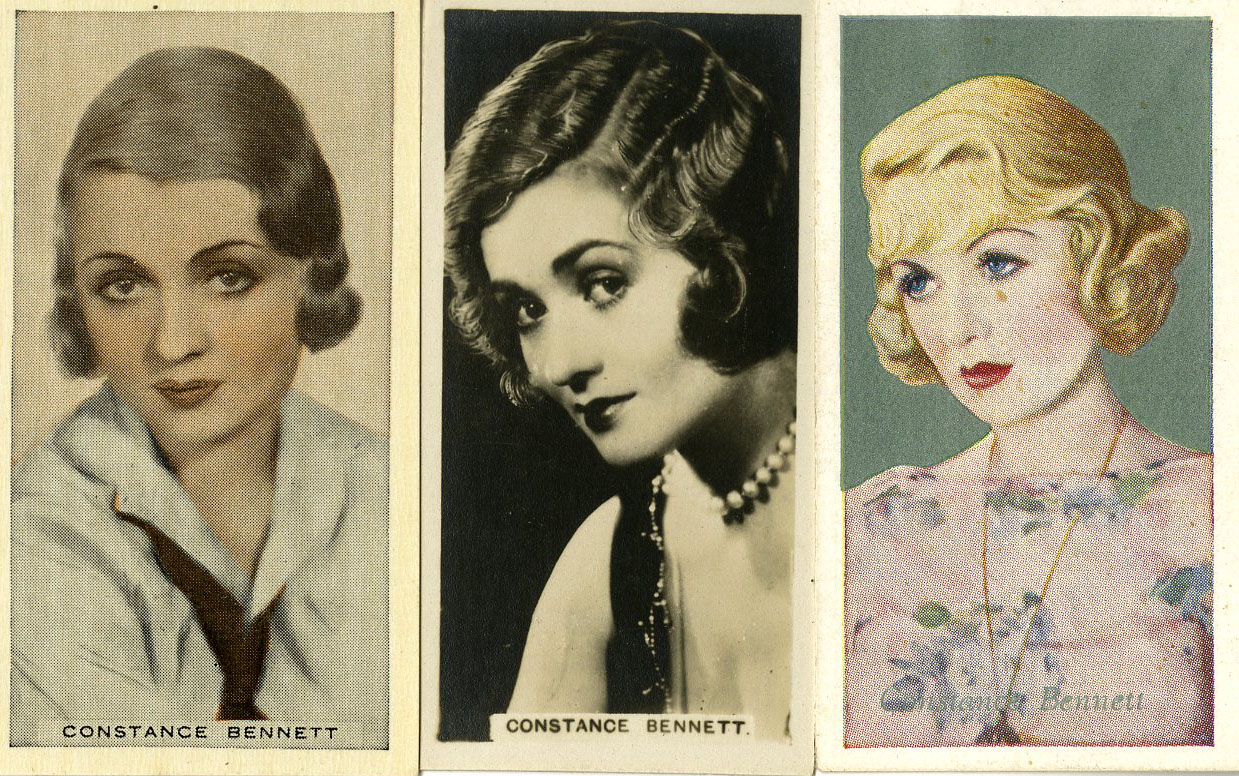 Sabine's earlier blog on Joan and Constance Bennett can be found at http://www.bdcmuseum.org.uk/news/joan-and-constance-bennett-hollywood-sisters/

Ringgold, Gene ‘The Films of Constance Bennett’ in Films in Review (October 1965).