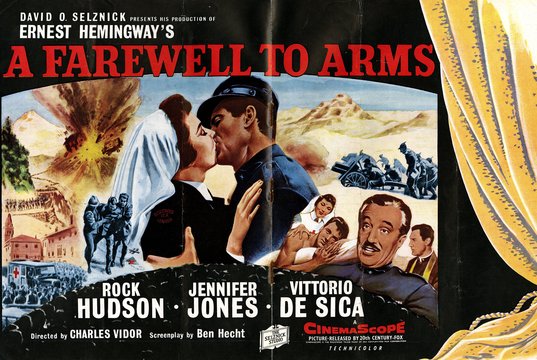 Our latest Blog comes from stipend holder Milan Hain who looks at our material on Hollywood producer David O. Selznick and his stable of stars. Milan is Assistant Professor of Film Studies at Palacký University at Olomouc in the Czech Republic. The featured image is a publicity poster for Selznick's version of A Farewell to Arms (!958).

David O. Selznick (1902–1965) is best-known as the driving force behind Gone with the Wind (1939), one of the most spectacularly successful films of all time. In addition to the Civil Era epic based on Margaret Mitchell’s bestseller, his credits as an independent producer include the original version of A Star Is Born (1937), a WWII home front drama Since You Went Away (1944), an extravagant Technicolor western Duel in the Sun (1946) and a trio of films directed by Alfred Hitchcock, Rebecca (1940), Spellbound (1945) and The Paradine Case (1947). 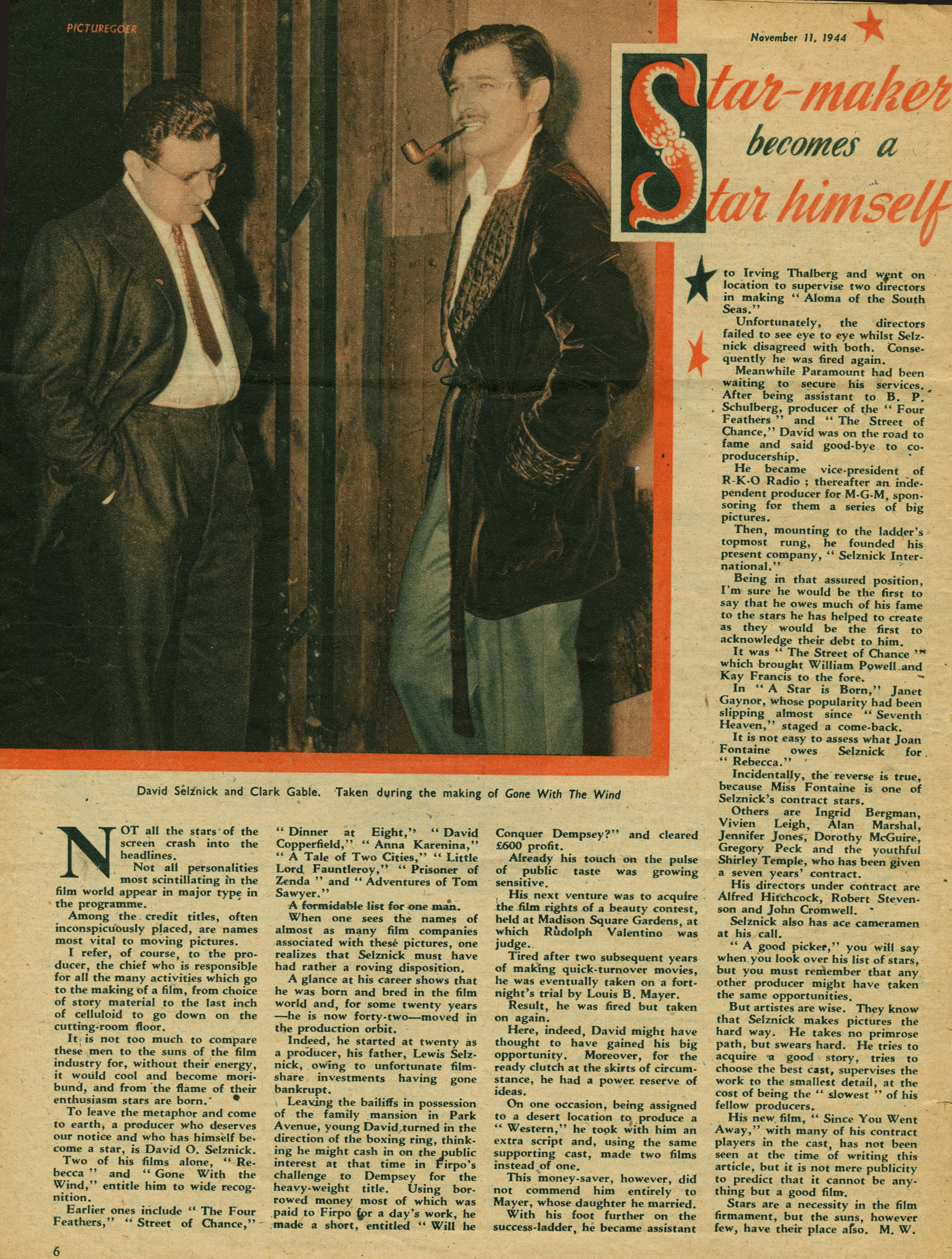 Obscured by Selznick’s triumphs as a filmmaker are his activities related to the development of stars. Beginning in the late 1930s, the producer made regular attempts at transforming relatively unknown actors and actresses into bankable commodities. In my current research project, I study the complex strategies used by Selznick and his associates to discover and develop Hollywood stars and to use them either in his own productions or, by loaning them out for profit, in films made by other studios. At one time or another, Selznick’s contract players included actors Joseph Cotten, Gregory Peck and Alan Marshal, and actresses Ingrid Bergman, Vivien Leigh, Joan Fontaine, Jennifer Jones, Shirley Temple, Alida Valli and Dorothy McGuire. In the 1940s and early 1950s, Selznick’s star-making activities complemented and ran parallel to his film production operations. By addressing this largely overlooked phenomenon, I wish to expand our knowledge of the career of this significant Hollywood figure and, more generally, to expose and examine some aspects of the star business at the height of the studio system.

My research owes a great deal to a specific branch of star studies which moves away from textual analysis to historical explorations of what Jeanine Basinger called “the star machine” – the industrial process of manufacturing popular star identities. To understand the process of creating and developing film stars, packaging them for audience consumption and transforming their qualities to better suit the producer’s aims, one has to consult extra-filmic sources such as contracts, memos, publicity and promotional materials or magazine articles and gossip columns. My project is thus heavily dependent on the availability of archival collections.

I conducted the bulk of the research in 2015 and 2017 at the Harry Ransom Center in Austin, Texas, where David O. Selznick papers are located. This was followed up by additional research at several other institutions in the U.S. and UK, including the Margaret Herrick Library of the Academy of Motion Picture Arts and Sciences in Los Angeles, the Wesleyan Cinema Archives in Middletown, Connecticut, and the British Film Institute in London. As I made my progress, however, I discovered that I can also substantially benefit from the rich collections held by the Bill Douglas Cinema Museum at the University of Exeter. I was very glad to find out that this institution runs a stipend programme open to international academics.

During my ten-day stay in Exeter in December 2018, I was primarily interested in three kinds of materials:

Let me illustrate what kind of knowledge I was able to extract by looking at three examples corresponding to the above-mentioned categories. 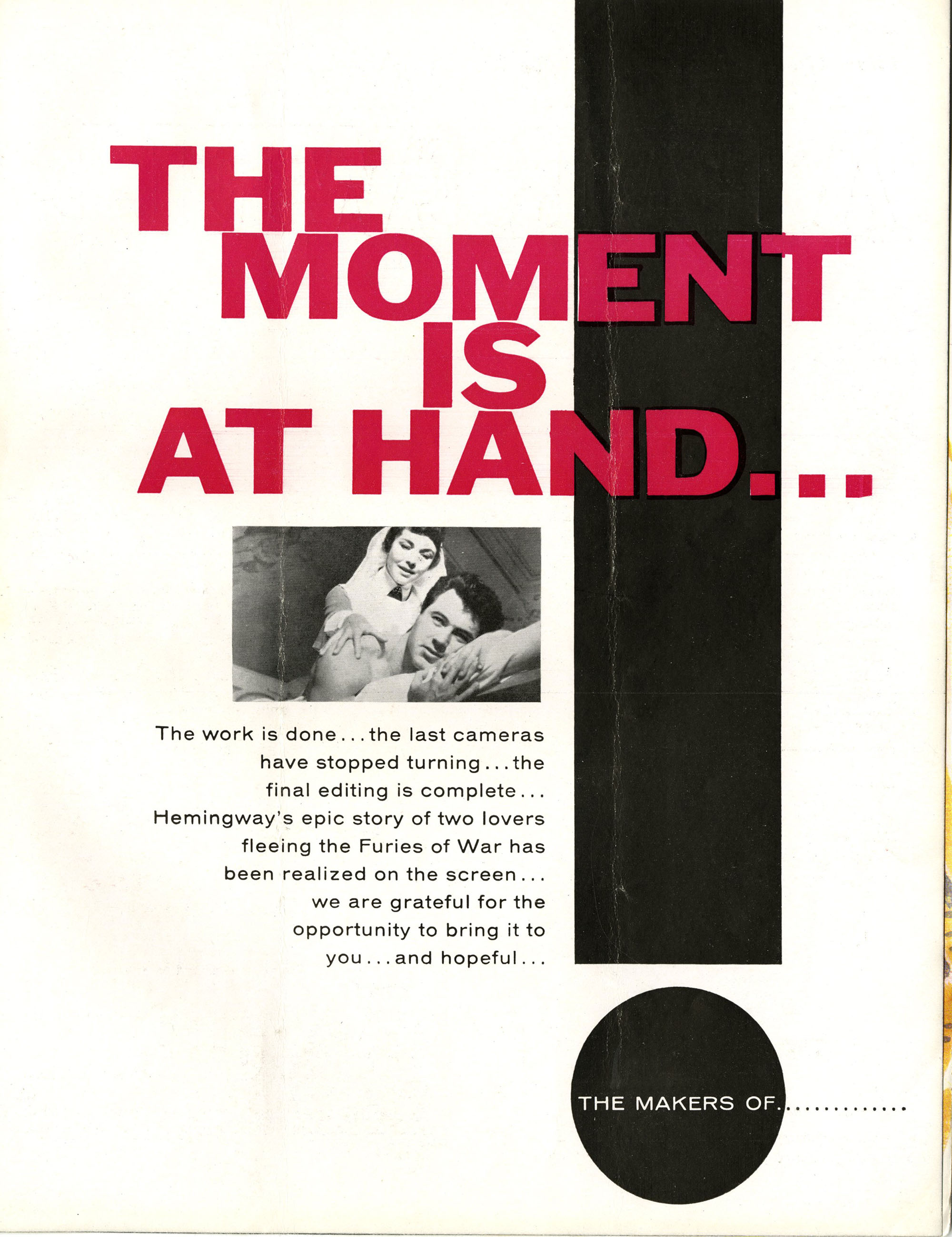 Selznick was always heavily involved in all creative aspects of the films he supervised and A Farewell to Arms – which turned out to be his last film – was no exception. He closely monitored the progress made by his British-born cinematographer Oswald “Ossie” Morris and regularly provided instructions and feedback. Even though the film was conceived as a high-budget epic, Selznick was convinced that spectacle had to be subordinated to romance – quite contrary to Dino De Laurentiis’ adaptation of War and Peace (1956) which he considered an artistic failure. Selznick therefore urged Morris to pay particular attention to the photography of Jennifer Jones and Rock Hudson who starred in the film as two lovers doomed to tragedy: “The audience must be in love with them visually from the beginning. We must have photography of them comparable with what was achieved on Miss Jones in LOVE IS A MANY-SPLENDORED THING, and what was achieved on Mr. Hudson in his last three or four films.” (memo from DOS to Ossie Morris dated 6 March 1957).

When the results were deemed unsatisfactory, Selznick ordered retakes until his high demands were finally met. The producer was particularly keen on capturing what he considered the “natural beauty” of Jennifer Jones, his wife since 1949, and pleaded with Morris to carefully study her facial features and delicate skin in order to present it in the most complimentary way. (see his memo from 1 June 1957) The materials in the Ossie Morris collection at BDC prove that for Selznick, a successful picture called for superb photography of its attractive stars. 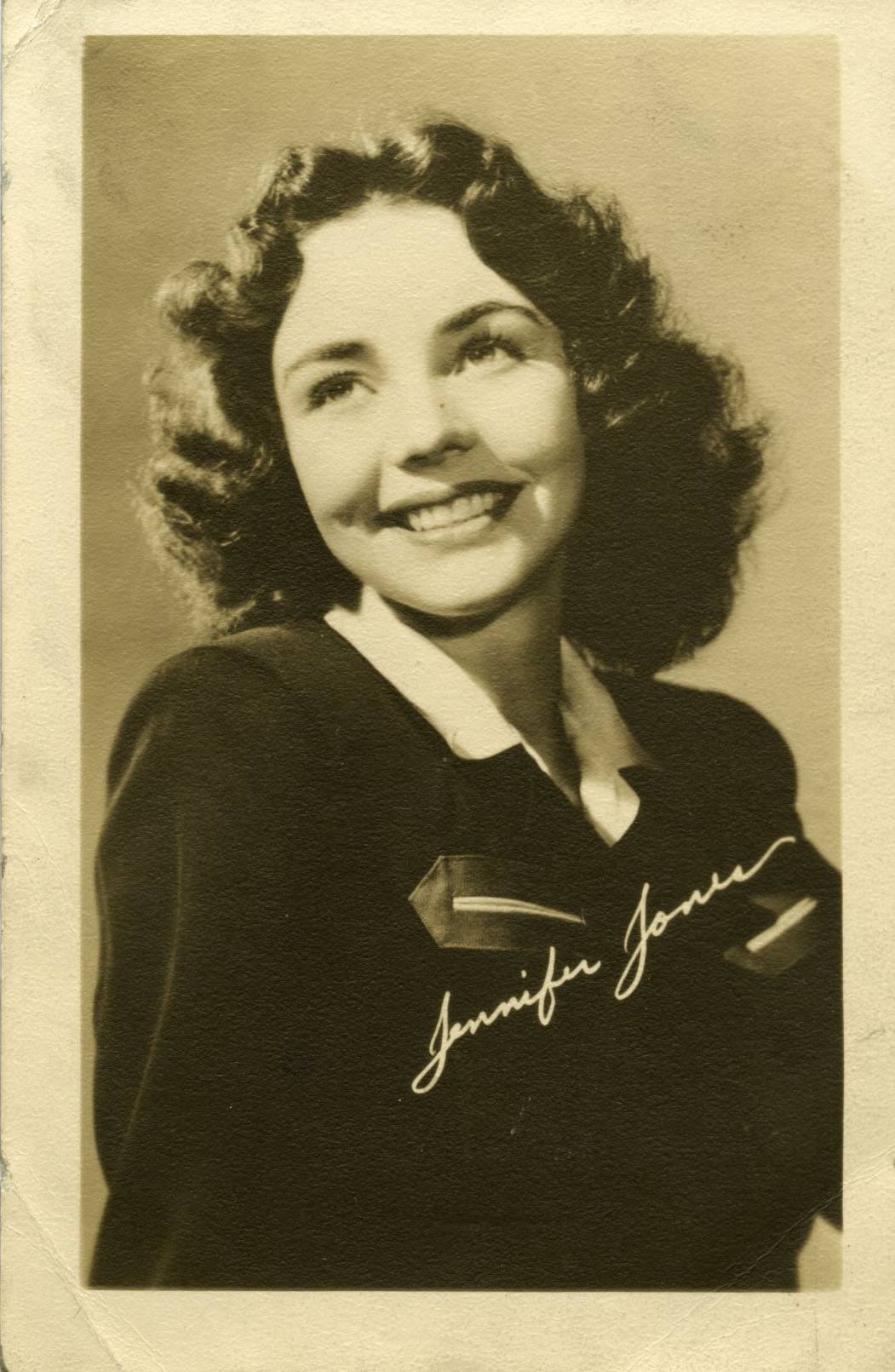 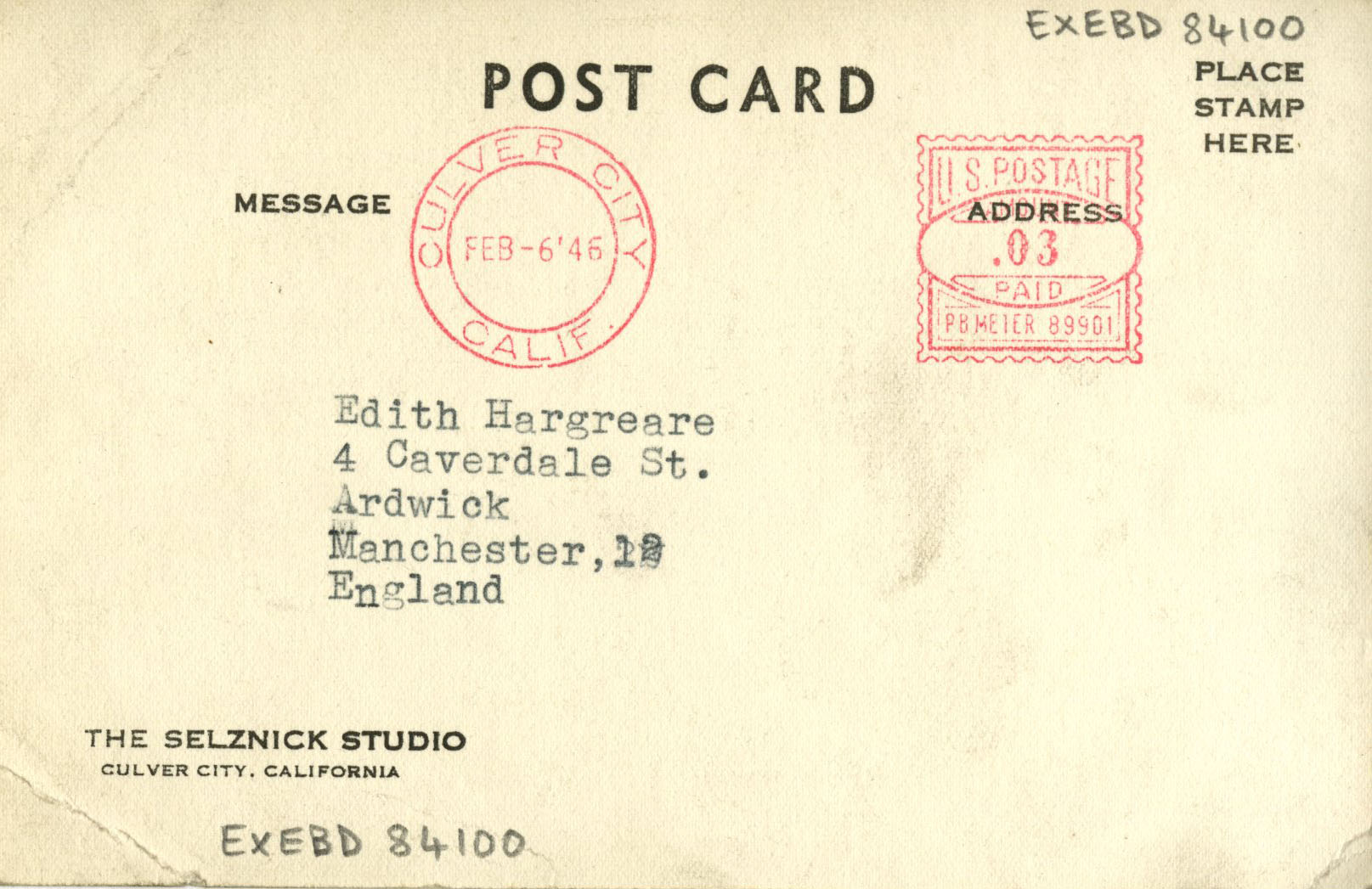 This was as true in 1957 (when A Farewell to Arms was released) as it was ten years before. Following WWII Selznick faced a challenge of renewing his star roster after his contracts with Ingrid Bergman, Joan Fontaine and Vivien Leigh expired. He took advantage of the Hollywood trend towards internationalization and scouted British, French, Italian, German and Scandinavian markets for new hopefuls. In an article “Five Dark Horses from Europe” – written exclusively for the British magazine Picturegoer and published in November 1948 – he presented his fresh discoveries, Alida Valli, Rossano Brazzi, Louis Jourdan, Alf Kjellin and Hildegarde Knef, and further elaborated on his bold international ambitions. Even though his plans eventually failed (none of Selznick’s “five” became a major international star while under contract to his studio), I find the article fascinating because it presents a rare instance when Selznick addressed his audience directly. Despite bold claims that Valli et al. will become stars “within a couple of years,” he also acknowledges the ultimate truism of Hollywood star-making: that the final verdict rests with the public. “Those are my five. I submit them to you, for it is you, in the long run, who will determine their success.” Even for experienced Hollywood insiders such as Selznick, star development was an inherently uncertain business. (David O. Selznick, “Five Dark Horses from Europe,” Picturegoer, 20 November 1948, vol. 17, no. 723, p. 16) Interestingly, Valli, Knef, Brazzi and Jourdan enjoyed successful international careers after leaving Selznick so we might at least give the producer credit for recognizing their potential (though, to be fair, they were all popular personalities in their respective homelands before being spotted by Selznick’s talent scouts). 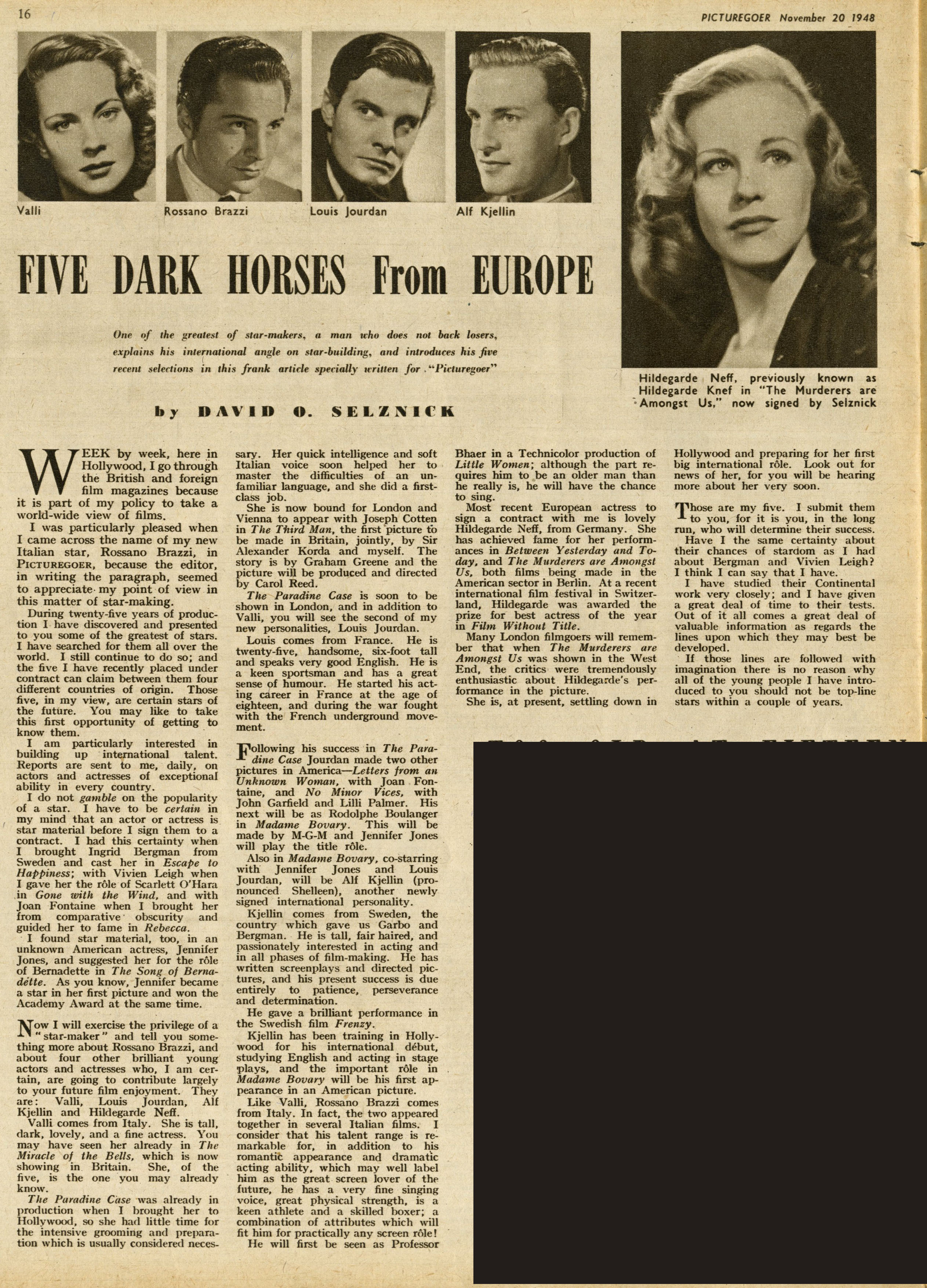 In addition to Selznick’s memos and a selection of contemporary magazines and trade journals, I was able to take advantage of BDC’s rich book holdings. After exploring recollections of dozens of Hollywood luminaries, it became clear that Selznick was both admired and despised by the Hollywood community. Dore Schary in his autobiography Heyday called him “the smartest and most gifted” producer in Hollywood. “He knew scripts, direction; was a master of film editing; had exquisite taste, energy to spare, a glowing gift for publicity and advertising, and a willingness to dare.” (p. 137) On the other hand, long-time Warner Bros. producer Hal B. Wallis (Casablanca, Yankee Doodle Dandy) didn’t always appreciate Selznick’s attempts to exert influence over other studios’ projects for which he provided his contract players. “I think that he sometimes forgot that I was producing the picture,” said Wallis. What Selznick considered protection of his valuable commodities was for Wallis nothing else than uncalled for meddling. For instance, after the preview of Love Letters (1945), starring Selznick’s stars Jennifer Jones and Joseph Cotten, he “went home and dictated an eight-page memorandum to me with suggestions for changes, as if I were one of his own employees. I read it with interest and I believe I even adopted one or two of his ideas. But I suspect I was more influenced by the reaction of the public than by the husband of the star of my picture.” (Starmaker: The Autobiography of Hal Wallis, p. 124; Wallis made a mistake in calling Jones Selznick’s wife at that point – they didn’t get married until 1949) Though highly subjective, accounts such as these are invaluable to me because they help to bring nuance into my understanding of David O. Selznick as a person and filmmaker. 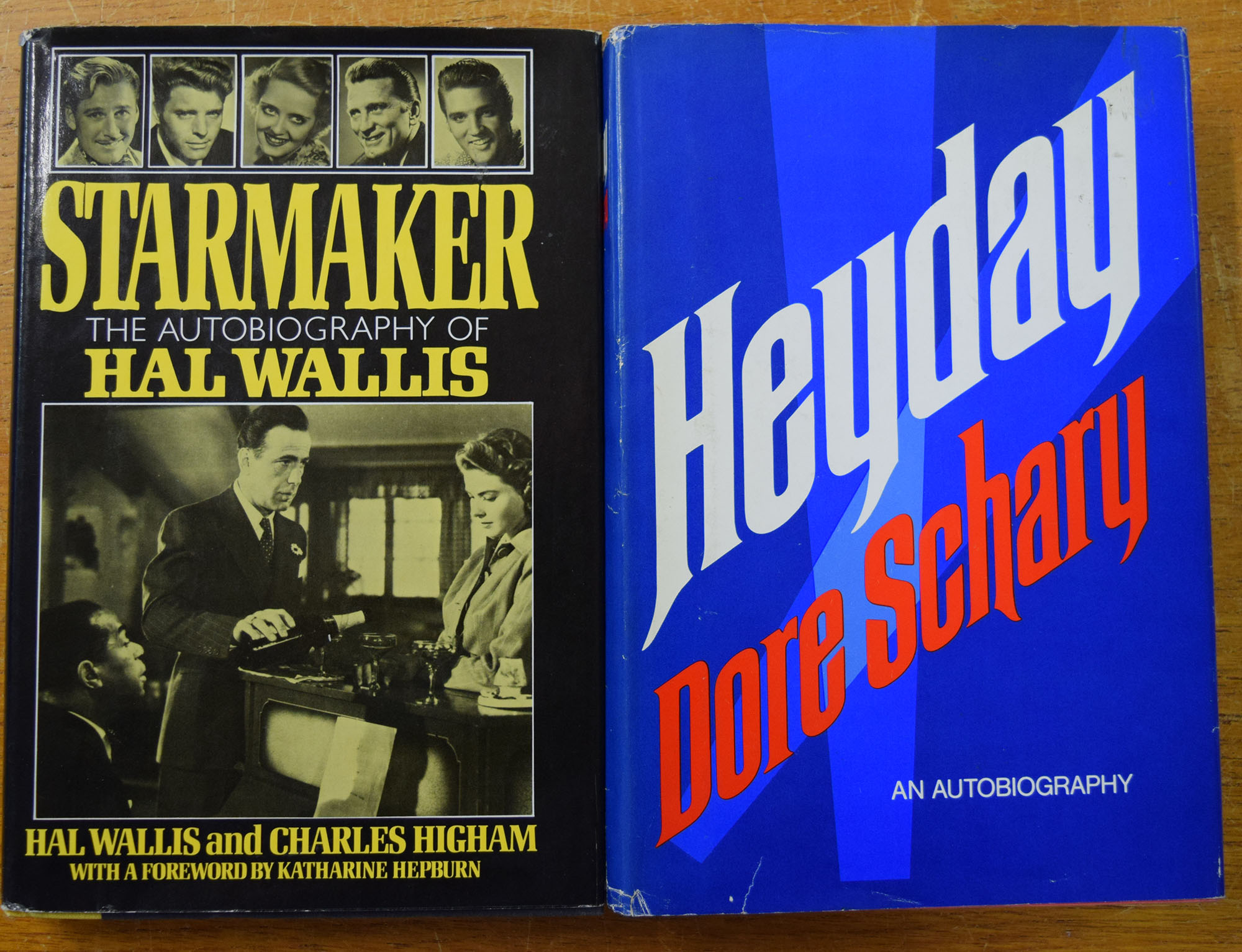 My visit to the Bill Douglas Cinema Museum was extremely pleasant and productive for which I’m grateful to Dr. Phil Wickham and Prof. Helen Hanson. It is often challenging for a scholar based in Central Europe to be engaged in historical research of the US film industry. Owing to the accessibility and generosity of institutions such as BDC I am able to study a topic which brings me professional pleasure and which, hopefully, is of interest to numerous others fascinated by the inner workings of Hollywood cinema.

Milan Hain is an assistant professor at the Department of Theater and Film Studies, Palacký University, Czech Republic. His research on David O. Selznick and his stars will result in a monograph published both in Czech and English.