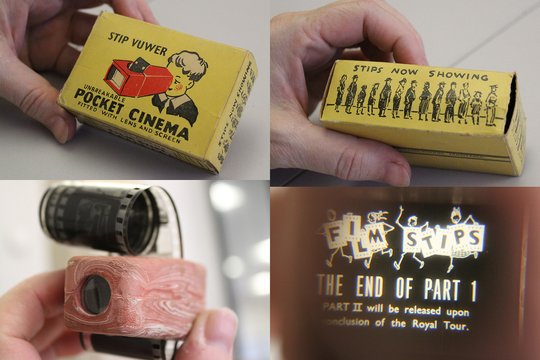 Our latest blog comes from stipend holder Dr Seth Giddings, who is Associate Professor of Digital Culture and Design at Winchester School of Art. Seth looks at our amazing collection of toys at the Museum.

… the cinema industry might be embarassed at being dubbed simply ‘the most successful of the toys that move’ (Opie and Opie 1989, 143).

The Bill Douglas Cinema Museum has a wealth of dolls, board games, card games, jigsaws, memorabilia, 20th century optical toys, interactive books and toy theatres. Its filing cabinet drawers open not to suspended files and documents but to cluttered and colourful cabinets of curiosity. Stuffed into these drawers are a familiar array of merchandising for relatively recent films and franchises including Star Wars and Disney animated features, but also tie-in toys from the first half of the twentieth-century, such as articulated Charlie Chaplin dolls, numerous Mickey Mouses and a handful of Felix the Cat souvenirs. 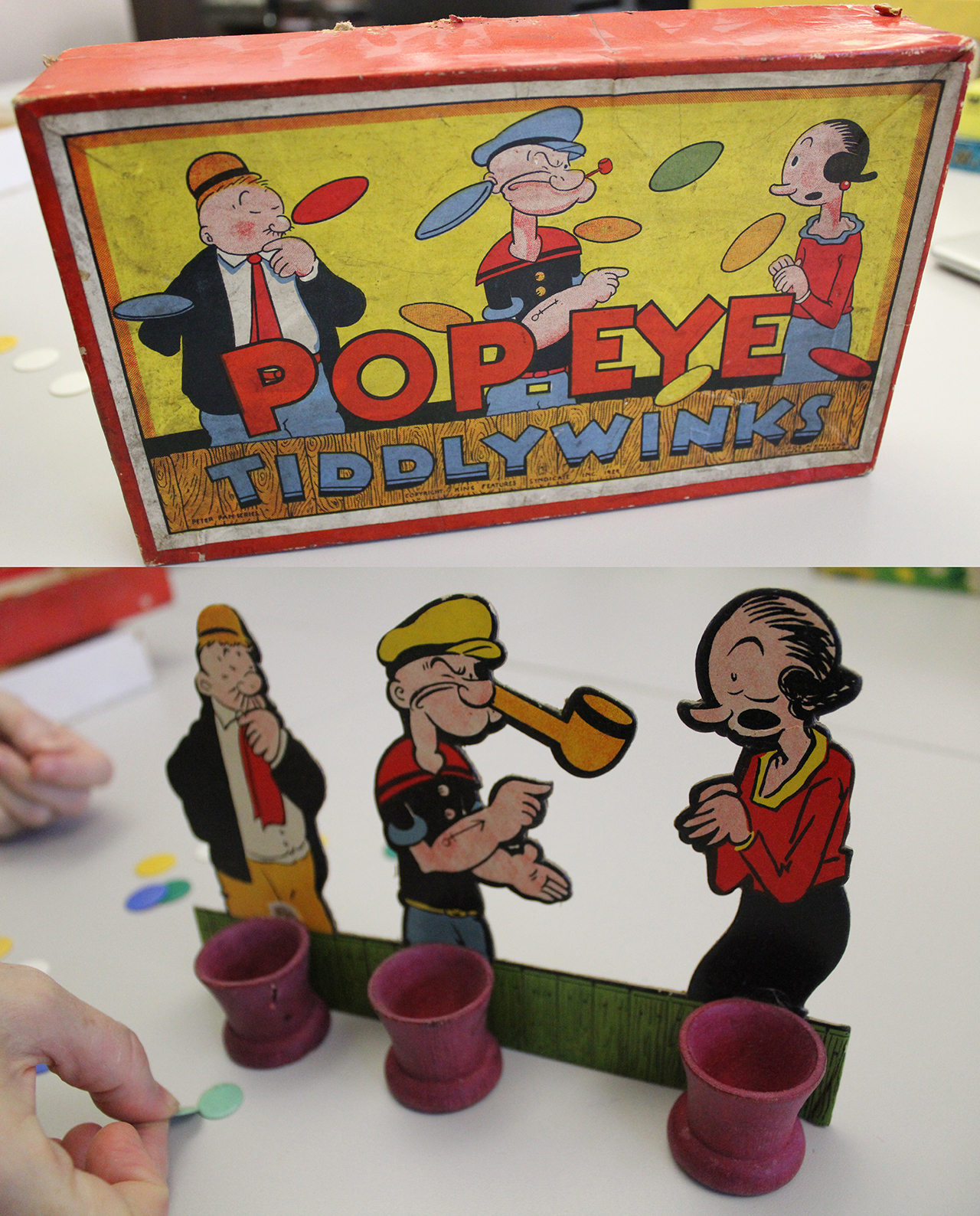 As commercial and commodified objects, often cheaply mass-produced and aimed mainly at children, tie-in toys and games have been largely overlooked in film and media history and theory. The significance of pre-cinematic optical toys such as zoetropes, stereoscopes, thaumatropes, phenakistoscopes, etc. has been widely studied however, and their place in the development of cinema technology and spectatorship has been a fascinating topic of research for film history and media archaeology. Building on my research on children’s videogame and postdigital media culture however, I wanted to investigate popular cinema-related toys as media technologies in their own right. That is, my interest was not in optical toys before cinema, but rather the toys and games that grew with and alongside mainstream popular cinema in the 20th and early 21st centuries. Could these toys be seen, I wondered, not as the evolutionary beginnings of cinema, nor as harbingers of future digital media, but rather as fully part of cinematic culture. Or, more ambitiously, how might our understanding of the emergence, development, and future of cinema be advanced if we regarded cinema itself as a subset of a toy culture rather than the other way around? If we picked up and ran with Iona Opie’s playful suggestion that cinema was merely ‘the most successful of the toys that move’: what other material, technical, imaginative and experiential dimensions of a para-cinematic genealogy of ‘toys that move’ might we find? 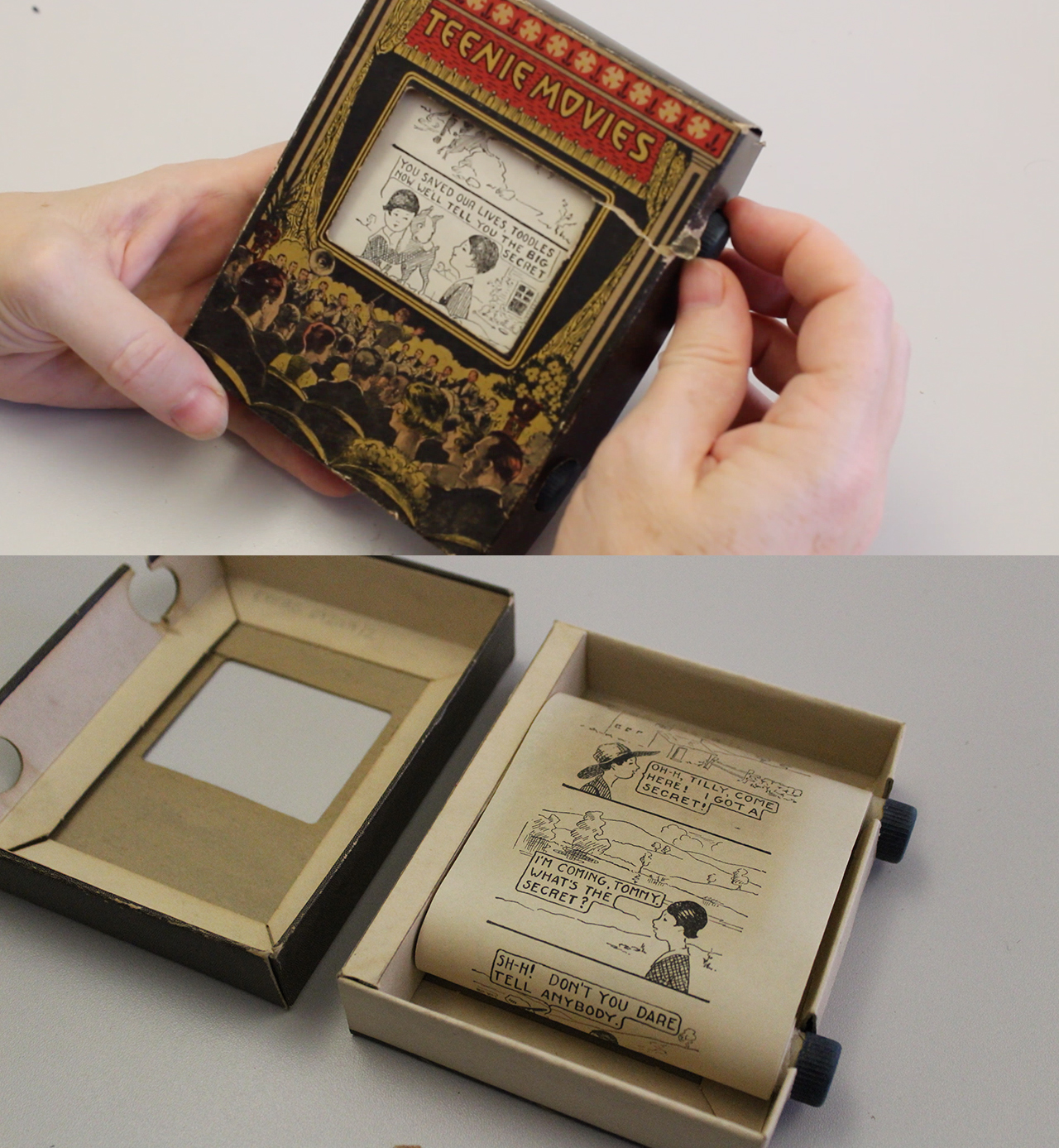 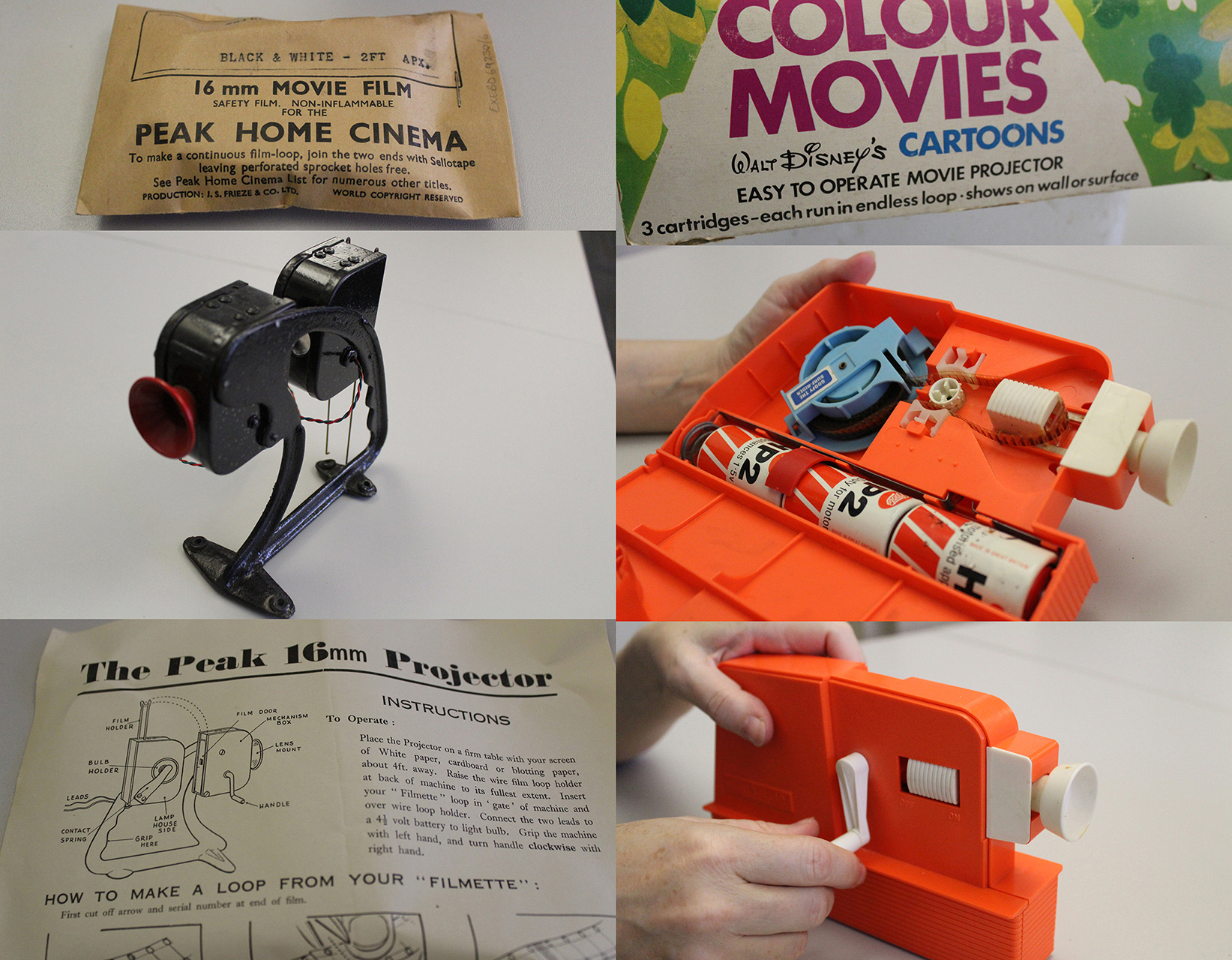 The collection’s objects offer rich clues as to how screen action, storyworlds and characters have been animated in everyday life through children’s imaginative play with cinema-related toys. However, in the more technically complicated devices I saw also strong indications of a continuation of the ‘machine interest’ of the cinematic apparatus (Comolli 1980), experienced not in the darkened auditorium with its remote screen but in the home, and in playful and exploratory hands. A wide variety of miniature or toy versions of mainstream cinematic apparatus ranged from simple card and paper devices such as the ‘Teenie Movies’ toy to small but fully functioning film projectors. 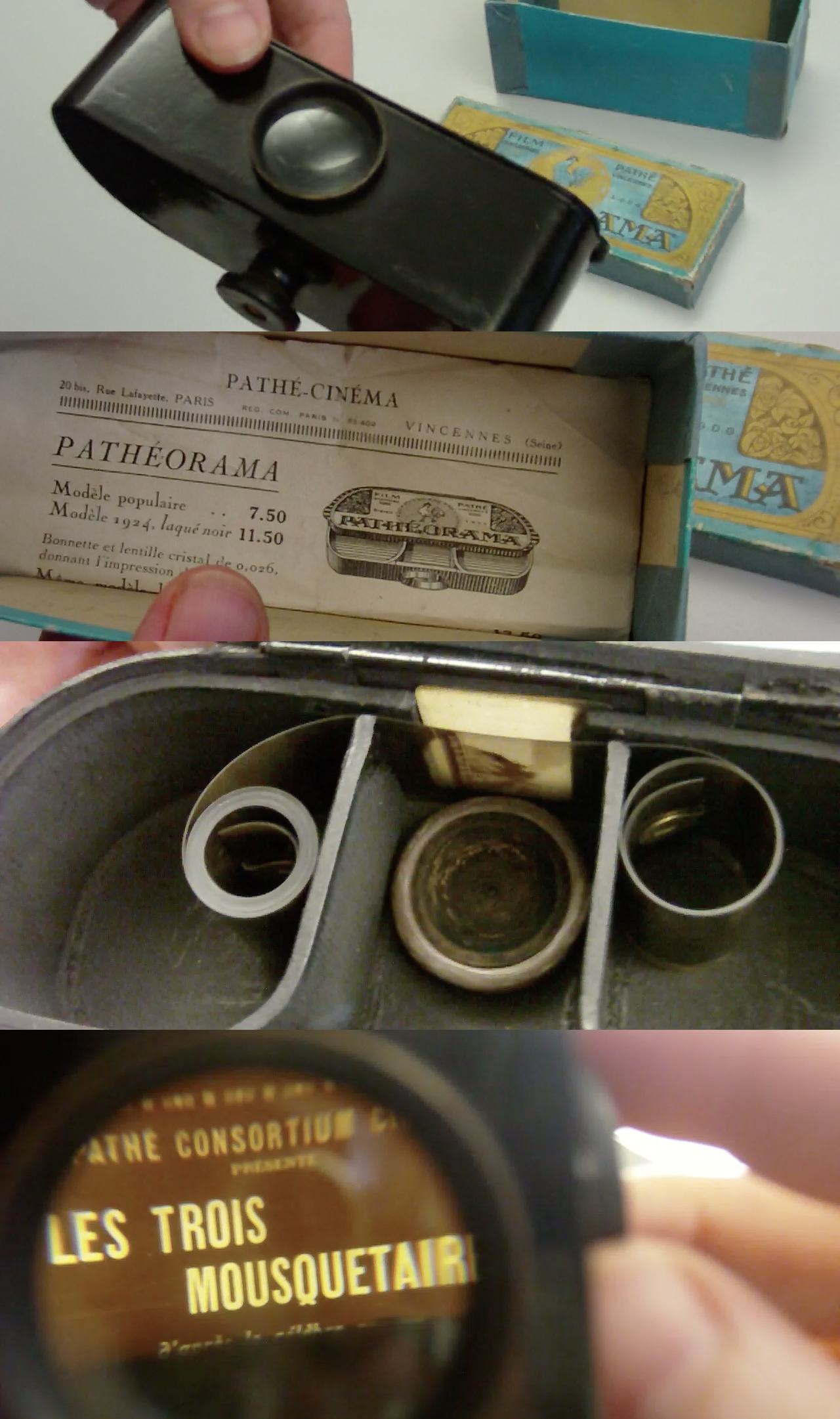 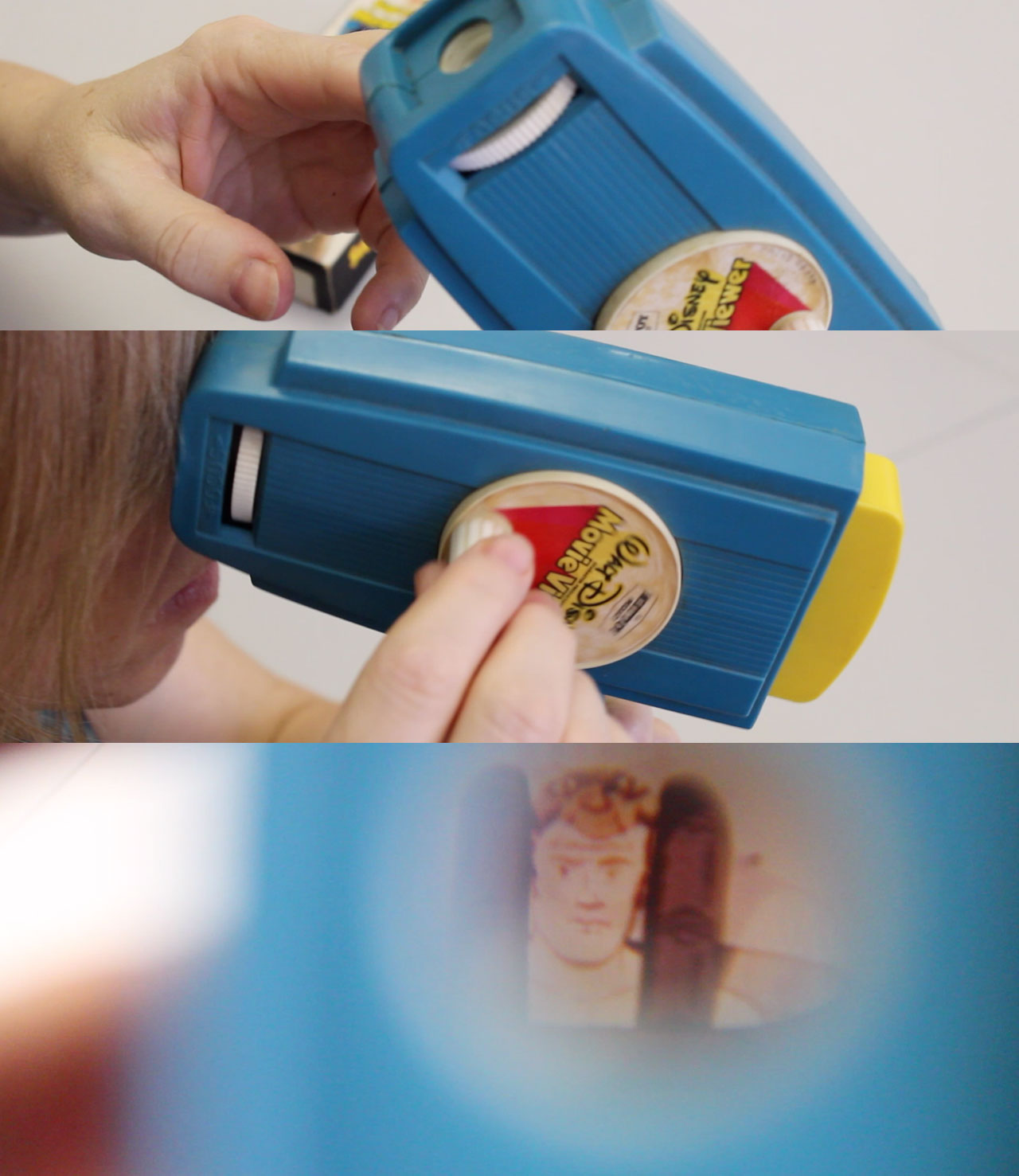 There were numerous ‘viewers’ of varying degrees of technical sophistication. Rather than projecting their images, which requires powerful bulbs and batteries these are devices that are held to the eye and peeped into, revealing an image backlit either by a small integral bulb or more often by holding the device up to ambient light. Their film strips (generally 8mm) might be handcranked through shutters in full animation, or simply wound past an aperture.

The collection includes a number of ‘Stip Vuwers’, simple devices moulded from thick rubber with a glass or plastic screen at one end and a viewing lens at the other. A few of these were packaged with short 35mm strips of celluloid, some a short sequence of conventional movie footage, to be pulled through the device, some a series of discrete frames telling a story similar to a comic strip. Some were souvenir items in themed boxes, commemorating royal events such as the Coronation (dating them to the 1950s) or exotic travel. They stretch the conventional notion of the cinematic - as characterised by the moving image - there are no shutters, no persistence of vision, but they do sustain something of both the perceptual mechanics that precede and persist through cinema: a luminous image experienced in a dark chamber. One such Vuwer rather audaciously - or perhaps with a playful and knowing irony - evokes the cinema-going experience for its users  as an audience queues around the box. 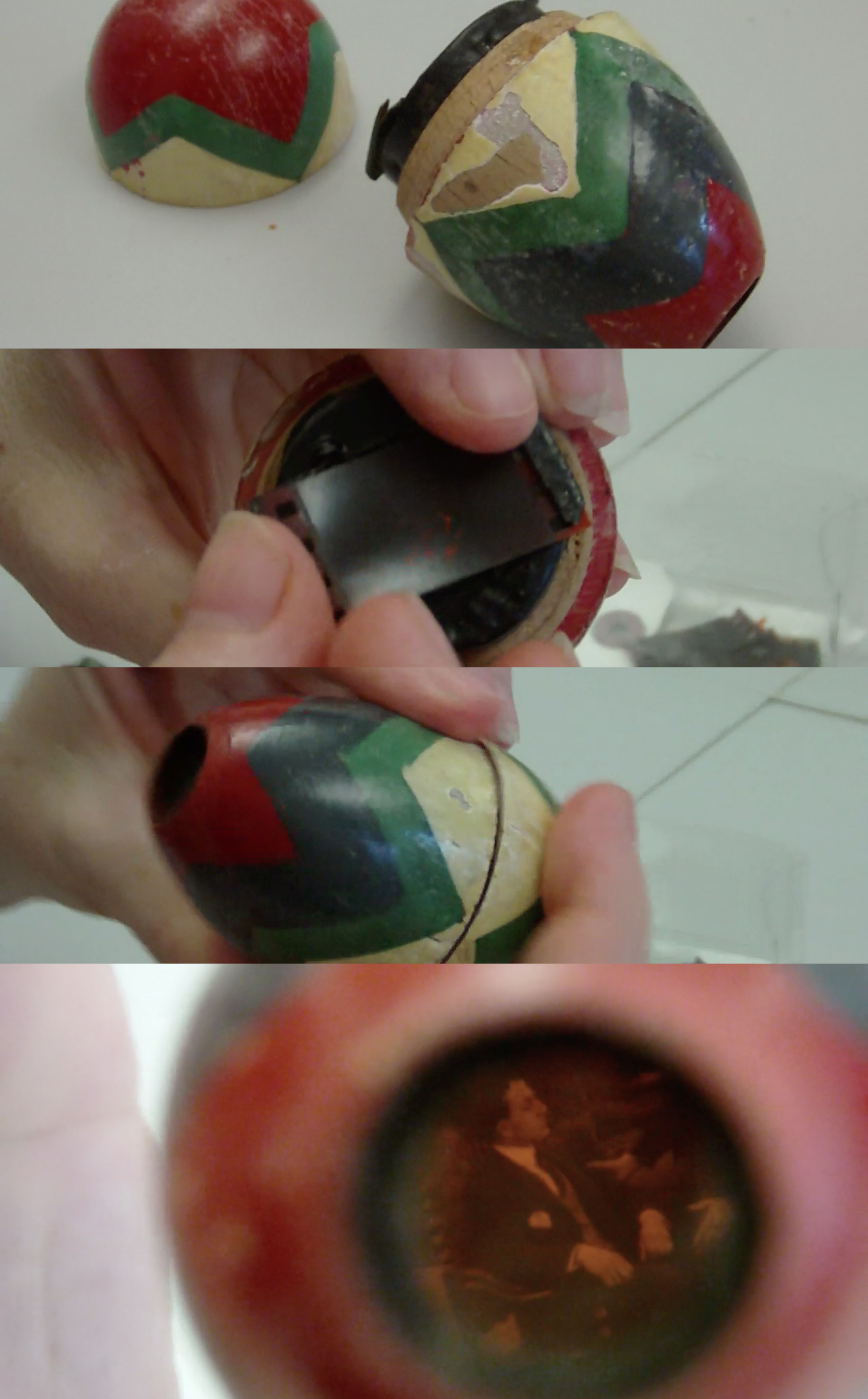 in their simple optics and aesthetics of secrets and revelation vuwers and the related ‘peep eggs’ have a long precinematic lineage in optical toys and devices which did not project their images (like a magic lantern) but into which users ‘peeped’ - such as mutascopes and kaleidoscopes, and back to the popular travelling peep shows of the eighteenth century and earlier (Huhtamo 2012). The Museum has an excellent collection of peep eggs, from elegant nineteenth century alabaster eggs containing painted glass images, to turned wooden devices in the twentieth century, designed, like the vuwers, to hold a single 35mm frame. From a media archaeological perspective the peep egg and all the other ‘peep media’ find more recent instantiation in immersive-visual apparatus and toys from the 1970s Viewmaster to contemporary VR devices. 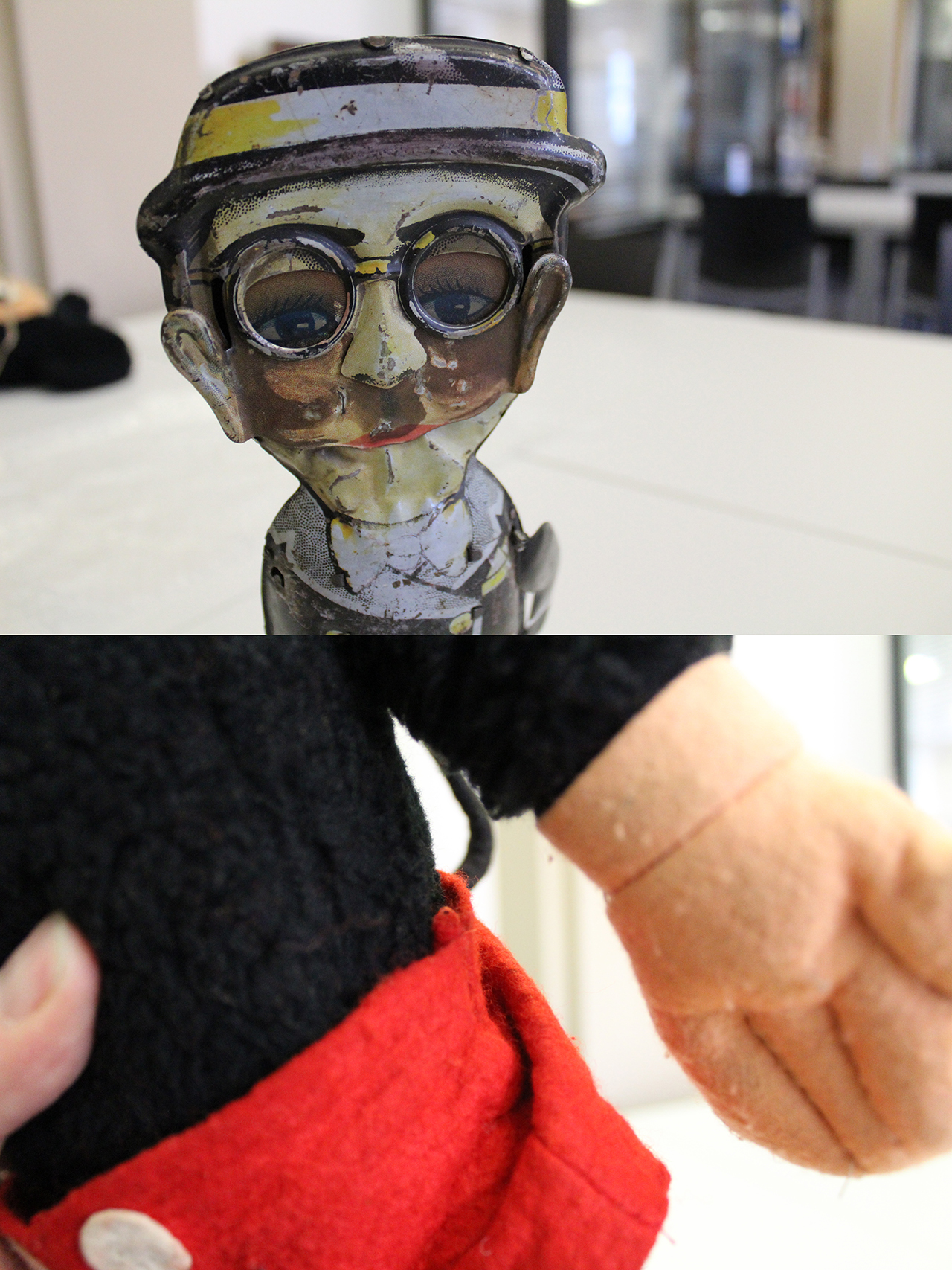 The opportunity to touch, manipulate and work the objects during my visit proved invaluable. As Meredith Bak learned from her research on optical toys (including at the Bill Douglas Cinema Museum), toys must be played with to grasp how they work and to imagine how children might have animated them in their own imaginative play (Bak 2016). Material characteristics of scale, tactility and manipulability cannot be appreciated from photographs and catalogue descriptions alone. Picking up, putting together, and working the toys opened up their intended uses and suggested alternative possibilities of play. Throughout I was fascinated by hints of how imaginative play with favourite films’ characters and storyworlds might be brought to life and mechanised by play with these technical toys. In what ways might the material and technical aspects of a toy or game frame or shape imaginative play? A soft, pliable Mickey Mouse toy suggests comfort and intimacy rather than the re-enactment of zany Silly Symphony action. Whereas it is hard to imagine the roughly contemporaneous and similarly-sized clockwork Harold Lloyd with its cold tin body and uncannily animated face being cuddled and whispered to. We might imagine instead an animated performance of its mechanism to a small audience of family or friends. Each offers an extension of their characters into everyday imaginative play, however they suggest (imaginatively) and demand (physically) quite different modes of play and tactile relationships with the child. 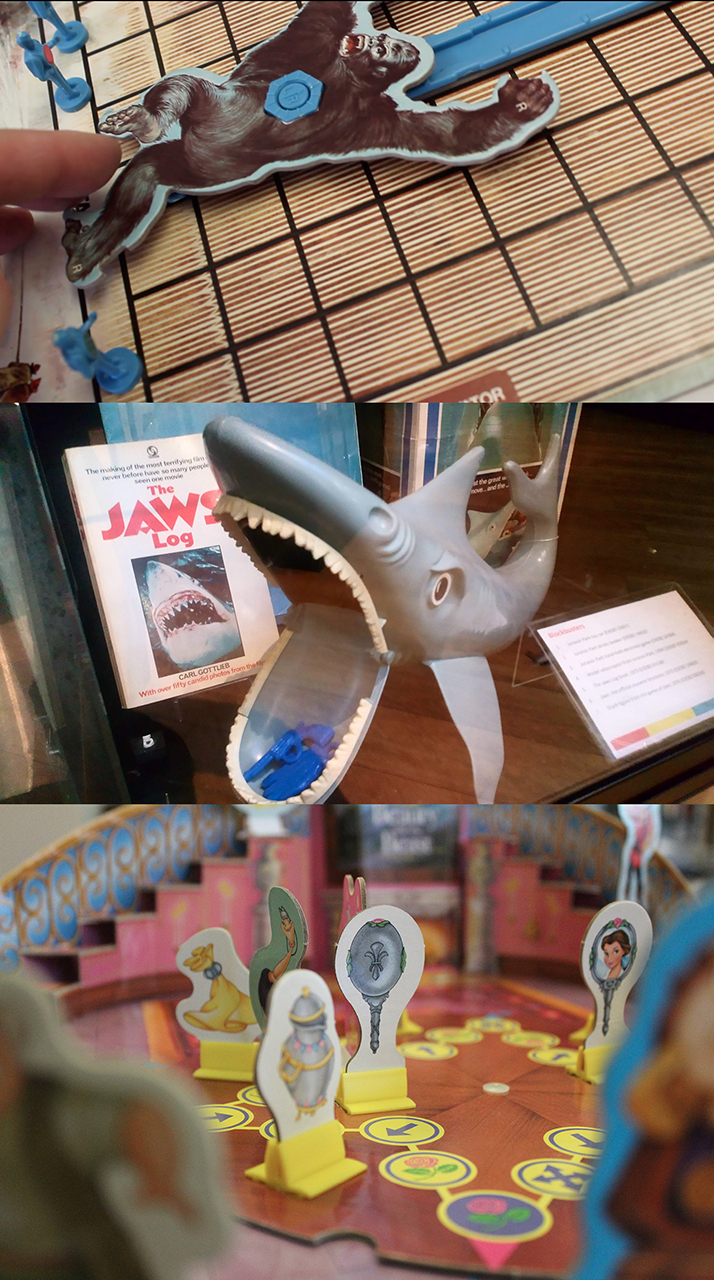 The articulation of imaginative, mimetic play with popular film and hands-on manipulation of devices was evident in many of the collection’s board games. These not only capitalise on the popularity of the films and extend their action and themes into domestic play, but also translate the action and themes into mechanical devices. The games are machines both in the sense of being structured around a game mechanic (rules, dice-throw randomisation, win-states, and so on), but also more literally as moving mechanisms. These three examples, King Kong, Jaws, and Disney’s Beauty and the Beast, are particularly inventive in their translation of the filmic world into cardboard and plastic architectonics with sliding, moving, manipulable characters and objects. King Kong (based on the 1976 remake) strips the film’s action down to the culminating scene of the monster’s ascent of New York’s twin towers, whereas Jaws is a mechanical allegory in its reduction of the film to the sudden snapping shut of an exaggerated plastic mouth. Beauty and the Beast condenses and mechanises the film’s central spectacle of a swirling ballroom movement into an elegant device that at once evokes its CGI centre-piece and provides a game mechanic of randomisation and revelation. 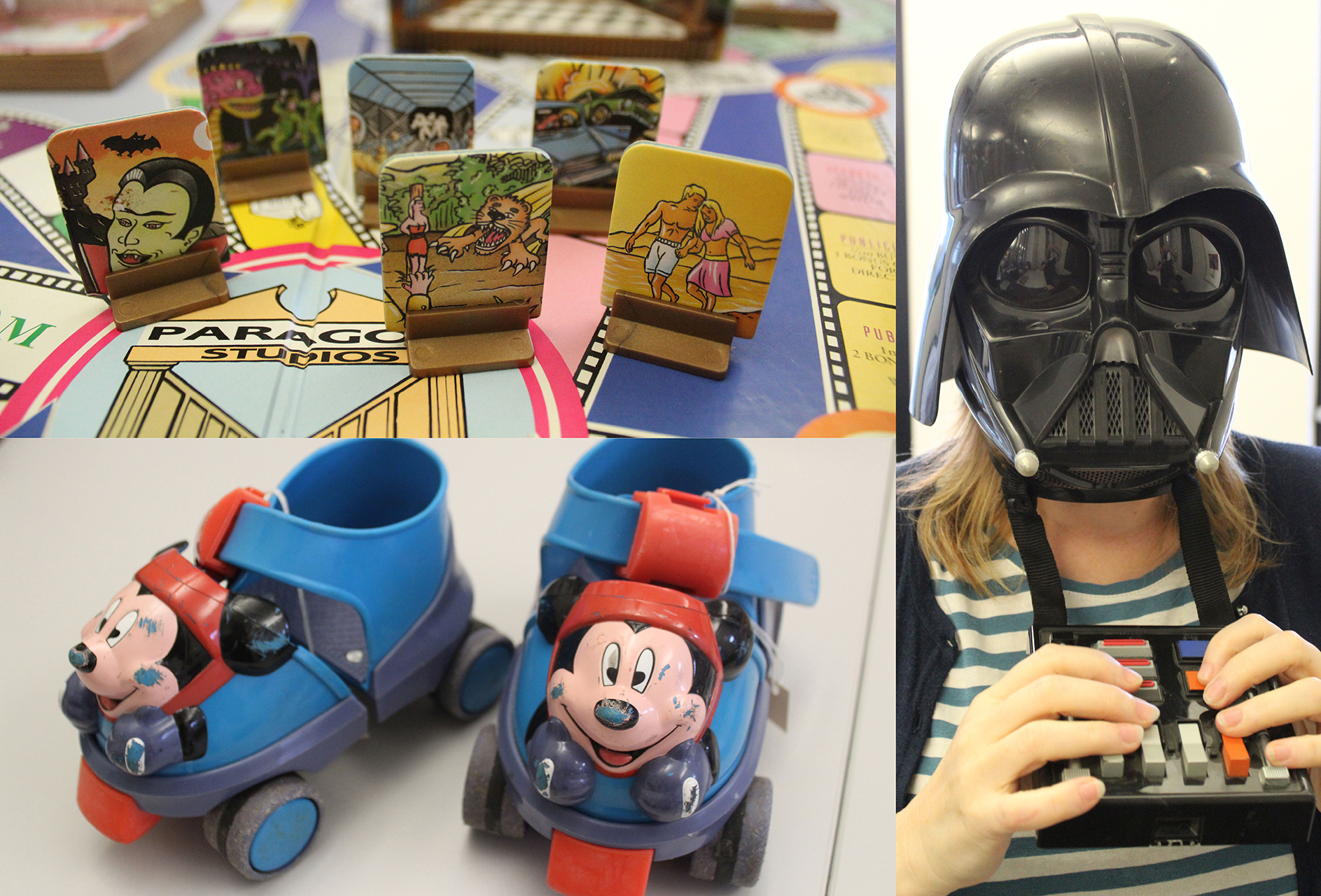 Along with their symbolic and intertextual pleasures, a phenomenology of scale, tactility and operability then is key to the attraction of toys and toy-play – the relationships of objects and devices to hands and fingers, their technical capabilities and haptic surfaces. As Wanda Strauven notes in relation to optical toys, the manual operation of cinematic toys is part of a larger history of hands-on media practices, media that are at least as tactile as visual (Strauven 2011). Following these ‘less successful’ toys-that-move through the Bill Douglas collection I felt a compelling sense of decades of domestic tinkering, fiddling, constructing, presenting, performing, toying - a hands-on interaction with backlit, animated and projected images and their mechanisms. From this angle, toys, movie-themed board games, card games and jigsaw puzzles can be seen not as peripheral to cinema, but as a key part of an expanded understanding of a kinaesthetic culture that is historically deeper and technoculturally wider than ‘cinema’. The Bill Douglas collections of toys is evidence of a domestic technoculture of manipulable images and machine, a toying with the apparatus as technological and imaginary.

Huhtamo, Errki 2012 ‘Toward a history of peep practice’, in Andre’ Gaudreault, Nicolas Dulac and Santiago Hidalgo (eds) A Companion to Early Cinema, John Wiley and Sons, 32-51.

Strauven, Wanda 2011 ‘The observer’s dilemma: to touch or not to touch’, in Errki Huhtamo and Jussi Parikka (eds) Media Archaeology: approaches, applications, and implications, Berkeley CA: University of California Press, 148-163.