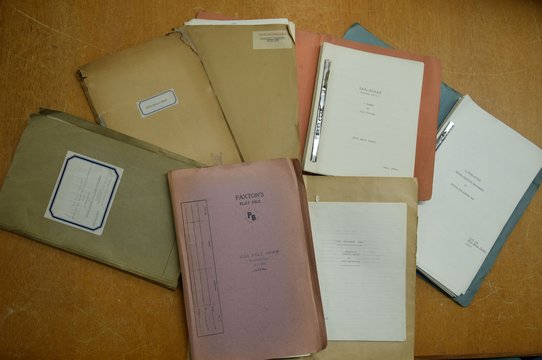 Our latest blog is from student intern and Volunteer Anna Rose Craig.  From February to March 2022, she completed a research project, investigating the uncovered work of female screenwriters within the Rank Scripts Archive which the Bill Douglas Cinema Museum acquired in January 2020.

My job was to survey the collection of other 1,500 scripts from the Rank Film Company mostly ranging from the 1930s-1990s including both produced, and unproduced films. My job over the last term has been to overview this large collection, identifying works associated with female screenwriters, novelists and other professionals within the film industry. I have surveyed the collection alphabetically, having time to identify screenwriters from B-R of the archive. I found a lot more than I was expecting, uncovering unlikely partnerships, interesting themes and most importantly the process of forgetting that has plagued many female screenwriters. Moreover, this archive was greatly varied, holding scripts by famous filmmakers like Muriel Box ( for instance 'A Novel Affair', which was filmed as 'The Passionate Stranger'). The archive also held famous documentary filmmaker Jill Craigie's original script 'The Store', later filmed as 'Trouble in Store', starring Norman Wisdom.  However there were also many completely unknown women such as Ann Alexander. These materials are key in reinserting the narrative of women back into the screenwriting industry, as what this archive has proven to me that female screenwriters do exist, you just may have to seek them out a little more carefully. 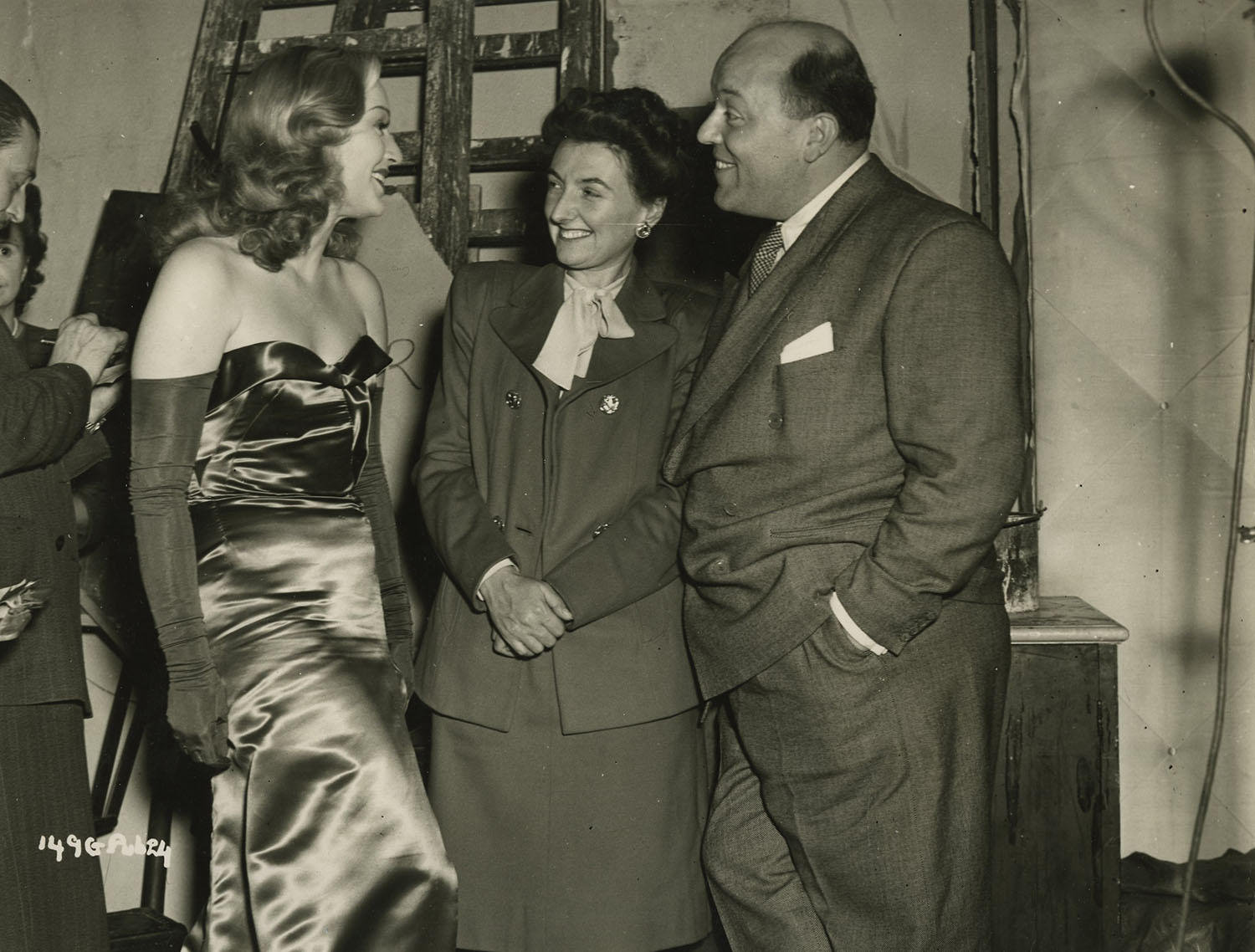 This archival study has both affirmed and subverted many of my assumptions about the role of female screenwriters. In terms of gendered roles of the period, I wasn’t surprised to find that many female creatives married into or were born to those associated with the filmmaking profession. For example, Vivienne Knight, Lydia Hayward, Muriel Box, Diana Morgan and Audrey Erskine Lindlop, all key women within my study, married into the film production industry. This does not deny their talent but speaks to the wider issue of women’s discrimination within the film industry. To succeed, women needed prolific connections within the industry to get their voices heard, explaining why the role of women in film seems so rare. Like this issue, women would often inhabit multiple professions alongside screenwriting to substantiate their work. For example, Christina Brand, writer of ‘Closed Carriage’ accompanied her writing alongside work as a governess, model, dancer and shop assistant. This speaks to the wider issue of pay within the film industry. Females were considered as less and thus paid as less in the film industry, meaning Women couldn’t make a living on screenwriting alone, making it a financially unviable and thus unrealistic career for many women. Issues such as this often led to the erasure of female writing within the film industry.

However, not all my expectations were met. Something that completely surprised me was the number of female-written scripts based on the work by male novelists. Coming into this project I assumed it was the norm that men often adapted the work of female stories, and it surprised me how common the subversion of this trend was. For example, Susu Checci d’Amor based her produced film ‘Graziella’ (1954) off Alphonse de Lamatrine’s novel and this trend is carried on throughout the archive. Furthermore, I was surprised by some of the topics female screenwriters were discussing in the context of their time. For example, Leslie Storm, a screenwriter whom I discovered lots of unproduced work from in the archives, was active in the 1940s-50s and wrote about the dangers of illegal abortions in her script ‘The Doctor’s Story.’ Jean Scott Rogers’s script ‘Jill Fell Down’ also intrigued me as it openly discussed prostitution. Though normative narratives on war, romance and coming-of-age are present in the archive, it is interesting to see the female screenwriters did not just adhere to the narrative norms of their periods but experimented with taboo themes and topics.

I also found a wide array of partnerships that women had both with male screenwriters, but also more interestingly with fellow female writers. Many female screenwriters were accredited with working with their husbands on scrips including Irene and Lewis Kamp, Liz and David Osborne Hugh and Margaret Williams and more. I was particularly interested in the working relationship between Margaret and Gordon McDonell. Active in the 1950s, Margaret appears to be the dominant creative within the relationship, with more screenwriting credits and roles under her belt. Irene and Lewis Kamp’s relationship is also interesting, as Irene adopted the pseudonym, ‘Grimes Grice’ when she worked on individual projects. When working independently, Kamp did not want to be associated with her marital status, striking out her own name in the film making industry. Many new potential partnerships between women screenwriters were also discovered. Particularly I found a continued partnership between writers Aileen Burke and Leone Stuart as they accredited as working on all the same projects on online databases and being accredited together as working on the script, ‘Farewell Performance.’

Furthermore, I found more abstract instances of female collaboration. There are multiple instances of screenwriter’s women borrowing from the work of female authors such as Hazel Wilkinson’s adaption of Dodie’s Smith’s ‘I Capture the Castle’ (This was also one of my own favourite childhood books, so it was a pleasure finding it in the archive.) There is also evidence of women reviewing and completing treatments on each other’s scripts. Another Script by Wilkinson, named ‘The Goosebury’ was treated for dialogue by British novelist Gillian Freeman. Women were not just isolated entities within the film industry but entered a creative dialogue with other female creatives. Collaboration between females was not as uncommon as we think, as they reviewed and borrowed from each other’s work, supporting each other’s roles within the film industry.

Within the Rank scripts archive, I also picked up many specific case studies of female screenwriters that could be applied to wider academic investigations. Interestingly I discovered a couple unproduced films, by credited producer Betty Box. These films included ‘Reward’, ‘Looking for Turner’ and ‘Nightrunners of Bengal. Though Box is not an unknown creative within the film industry, it is exciting to find the unmade projects of such a notable woman in film. Though I cannot say for certain why these films weren’t produced, their interesting themes of colonialism and immigration may not have suited the popular genres in the period box produced in.

Another woman I found a multitude of work by was Mabel Cowie, who went by the pen name, Lesley Storm. Though she is accredited with writing films across the 40s and 50s, within the archive I found 4 of Storm’s unproduced films. I found these scripts particularly fascinating for their taboo and feminist themes. As already mentioned, she wrote on abortion in ‘The Doctor’s Story’ and her script ‘The Intruder’ focuses on the Women’s Auxiliary Airforce, subverting usually male-dominated war narratives.

Audrey Erskine Lindop was also another woman I found a lot of material on within the archive. While on databases she is usually accredited as writing alongside her husband, within the archive I found a couple films individually accredited to Lindop. Her earliest unproduced script ‘It Rings a Bell’ or ‘Is Your Call Really Necessary’ takes on an interesting narrative stance. The plot is centred around a group of girls working at an exchange telephone centre, interrelating the story with the lives of the people who call into the switchboard. I found this an engaging way to structure the story, focusing both on the working lives of the women working at the centre and combining it with diverse narratives.

One of my favourite finds was discovering actress Betzi Beaton’s attempt to enter the screenwriting industry. Her script ‘Devil Take Her’ is fascinating, following an ordinary woman who is suddenly possessed by the urge to leave her ordinary life and the societal expectations associated with it, and strike out a new liberated life in New York. Beaton’s work as a writer has often been eclipsed by her acting career. Finding further evidence of her writing endeavours within the archives proves that she was more than just an actress, uncovering her role within the screenwriting industry.

This is just a taste though of the archive, I have found a multitude of both well-known and ignored women who have created both unproduced and created works. What I realised during this project is that the unproduced, ignored work is just as important as the female work that did succeed within the industry. By considering the works of ignored women, we can consider why their narratives were rejected by the industry, speaking to the wider issue of the ignorance of women within the film industry.

I also found some specific films by female writers that I particularly enjoyed. Though not explicitly written by a woman, Cyril Lucas’s unproduced script ‘The Packet Said Cyanide’ or ‘Did it Happen?’ represents how women could have involved their voices within the screenwriting process in untraditional ways. Within his script, Lucas borrowed from an interview by one of the first and most notable female police officer, Lillian Wyles. Wyles discussed a particularly shocking case concerning a woman who admitted to killing her mother when she was 7 years old, which Lucas appropriated into a script. Though not written by a woman, this exemplifies how women could implement the narrative agency through alternative means. Though eclipsed by male influence, their stories could be appropriated and shared through screenwriting.

I also enjoyed Bridget Boland’s unproduced script ‘Face Value’ or ‘Tired of Love.’ Based on Merrick’s ‘The Girl who was Tired of Love,’ I found its themes interesting as it discusses issues of beauty standards. The plot follows a wealthy widow who attempts to swap her face with a beautiful young girl. I found it interesting that Boland picked this novel to adapt, as perhaps the themes related to her experiences as a woman and how she perceived societal pressures to conform. Furthermore, the slight sci-fi element of this script is something I found engaging.

Janet Green’s ‘A Long Way from London,’ intrigued me for its themes of female empowerment and independence. Based on a novel by Gigby Gerathy, the plot follows a young girl, Kate, who leaves her London department store job to strike up an illegal rum-running business in the Caribbean Islands. Interestingly, I also found an adaptation of this book by Lesley Storm. Intriguingly, two women both attempted to produce this novel. Perhaps its themes of female empowerment and exotic travel enticed them.

Intriguingly, I discovered a couple instances of women writing on imperial and colonial themes. Sarah Duncan’s ‘A Mother in India’, Norah Lofts ‘Julia’ and Box’s production of ‘Nightrunners in Bengal’ all are set in colonised territories, discussing the impacts of imperial authority. These films may be interesting for those studying colonial histories or narratives.

It has been a pleasure to work on this project over the last term. I have been truly taken aback by the sheer volume of women’s work I have found in the archives, and I believe it is a truly rich resource in considering women’s narratives within the screenwriting industry. Women involved themselves in the film industry through a diverse set of roles and influences, bringing new and interesting themes to the table and denying gendered biases.