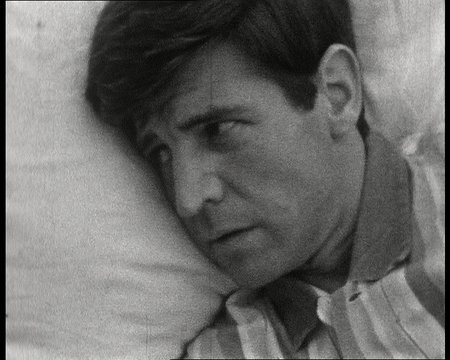 Before he went to film school Bill Douglas made some short films and home movies. They have never been publicly seen before – until now. To promote a new documentary coming out later this year Bill Douglas: Between Life and Art; a new book from to be published in the autumn through University of Exeter Press, Bill Douglas: A Film Artist, and to celebrate the anniversary of what would have been Bill’s 88th birthday on 17th April and the 50th anniversary of the release of Bill’s first film, My Childhood, we have worked with filmmaker Andy Kimpton-Nye to produce a digitised version of one of Bill’s most accomplished 8mm films, FEVER, which can be viewed here.

In 1964 at the age of 30, Bill Douglas feared he would never realise his dream of becoming an artist. He had studied drama at the Theatre Royal Stratford East, under Joan Littlewood. After leaving Littlewood’s group in 1960, he had some success as an actor. He was a regular in Granada TV’s series The Younger Generation, alongside notable names such as John Thaw and Johnny Briggs. He appeared in an episode of the TV drama, Dr Finlay’s Casebook. There was also a rumour of an appearance in Carry on Cleo as an ‘Ancient Brit’. However, Bill wasn’t destined for stardom and even he acknowledged he had a limited range.

He had also tried his hand at writing. He wrote plays for radio and tv, a film script, which he sent to the director Clive Donner, and plays for the theatre, one of which landed on George Devine’s desk at the Royal Court but was deemed too dark even for a company with their reputation for pushing at theatre’s boundaries, and a novel.  He did write the book for a musical, called Solo, which was actually produced in Cheltenham in 1962. Almost all of his work as a writer was rejected, however.

At Christmas 1965 something happened which helped change Bill’s life. He stayed with his close friend Peter Jewell at Peter’s family home in Barnstaple. Peter suggested Bill follow the family tradition and make a wish list of what he wanted most for Christmas. When Bill opened his present from Peter on Christmas Day, he could hardly believe his eyes. It was a complete Standard 8mm film-making kit.

Between 1966 and 1969, Bill would make, or be involved in making, twenty home movies and short films, a prodigious output for an amateur film-maker. He was like a child with a new toy, out on the streets of Soho and Central London filming tilts, pans and zooms. He made comedies, experimental dramas, homages to Hitchcock and Silent Movies, and home movies, mainly featuring him and Peter and a group of their friends.

These early attempts at film-making by Bill Douglas have never been seen by the public before, primarily because Bill didn’t rate the 8mm films, seeing them as not much more than a bit of fun. However, making twenty films in three years was undeniably a brilliant training for him and he readily admitted that he learnt from his mistakes and that it taught him what not to do.

At the beginning of 1969, Bill gained entry to the London Film School. His graduation film, Come Dancing, showed he had now found his voice as a film-maker. He went on from film school to make his three black and white masterpieces My Childhood, My Ain Folk and My Way Home, and his vibrant, colourful epic Comrades to global acclaim.

Andy’s documentary, Bill Douglas: Between Life and Art, produced by Hopscotch Films in Glasgow, and highlighting the home movies, should be completed this summer. The book Bill Douglas: A Film Artist edited by Amelia Watts and Phil Wickham (Curator of the Museum) and featuring a range of contributors on Bill’s work, will be published in the autumn.

You can find a taster for the documentary here