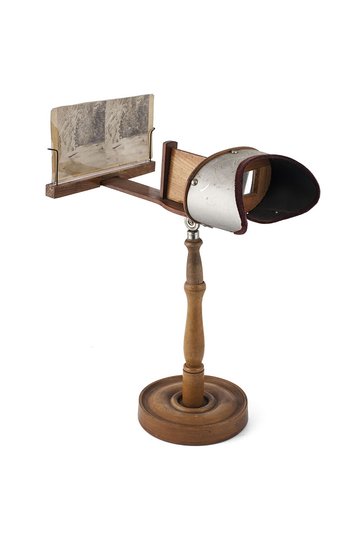 Contemporary entertainment media are saturated with 3D visual technologies, from the volumetric world-building software of CGI, to the immersive spatialities of Virtual Reality, to the persistent presence of 3D exhibition at the multiplex. These technologies are often associated with a cutting-edge futurism – offering as they do a highly seductive integration of viewer/participant with the digital landscapes of the twenty-first century. Yet 3D or stereoscopic media have a much longer history than such an association implies. Invented in the 1830s and then popularised in the 1850s, the stereoscope – a viewer through which a set of twinned images is turned into a spatial scene – dominated the late-Victorian cultural terrain in ways that have been mostly forgotten, or at the very least marginalised. On the face of it, this photography, with its small-format, mostly black-and-white cards, might seem entirely removed from today’s cinematic blockbusters and their 3D spectacle. However, in my British Academy-funded project, Contemporary 3D Cinema: Space in the Digital Age, I have found that understanding the aesthetics and technologies of today’s 3D cinema is greatly enriched by an exploration of this earlier media environment.

Unlike 2D or planar photography, stereophotographs require particular conditions of viewing: this can be as simple as a couple of pieces of card, or the more reliable use of an apparatus – a stereoscope – which splits the left and right eye views and uses lenses to magnify the content. Thanks to the role of binocular disparity in embodied vision, all of this results in the impression of spatial cues. If the stereoscope is the hardware, then stereocards are the software – these mostly cardboard cards of uniform size (7” x 3.5”) each contain two images, and sometimes a description of the location or content of the scene photographed (or, more rarely, drawn). Ranging from Alpine views and other tourist images, to recordings of historical events (such as the trench warfare of World War One), to staged stories unfolding across a series of cards, to animated optician’s aids and children’s optical amusements, these were produced by many different companies across the second half of the nineteenth century and the beginning of the twentieth. 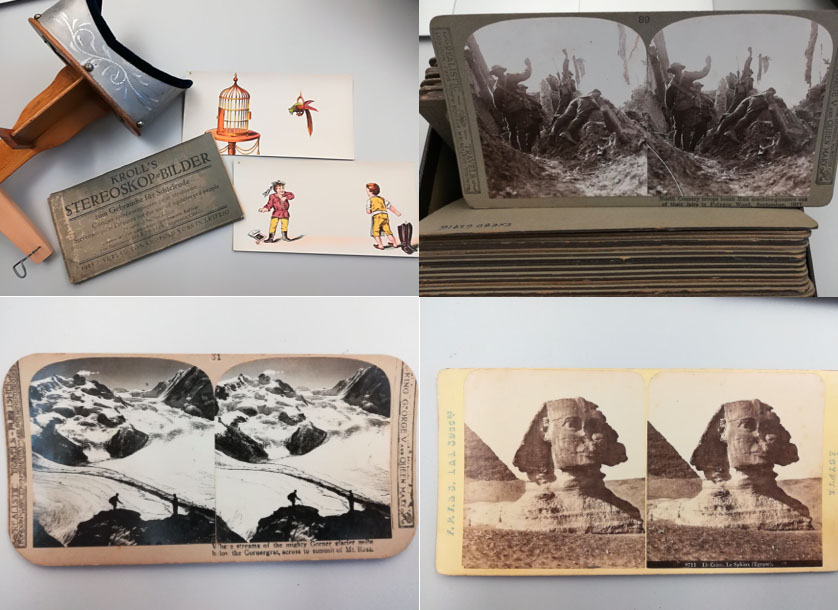 A selection of stereocards from the collection. Clockwise from top left: a pack of animated children’s illusion slides (EXE BD 63178); trench warfare (EXE BD 62917); a tourist shot of the Egyptian sphynx (EXE BD 48349); and the record of an alpine expedition (EXE BD 72739).]

It might be true, as Jonathan Crary implies in his influential book Techniques of the Observer (1991), that modes of observation are historically situated and embedded in bygone practices, techniques, and institutions that can only be partially reconstructed. But for this reconstruction to take place at all it is necessary for us to not only explore the theories and cultural contexts of certain media practices, but also to get our hands dirty, engaging in a tactile manner with the devices and practices that would have been everyday objects and undertakings for the Victorian consumer. Just as it would be foolish to try to write about the popularity and cultural meaning of the iPhone without picking one up, to understand stereo culture in the nineteenth century requires the tactile appreciation of all these objects. Thankfully, the Bill Douglas Museum is graced with a vast collection of stereocards and stereoscopes. The collection’s enormous range of both helped me to think about the extent to which stereo media colonised visual culture between the 1860s and 1910s, and also revealed the extent to which stereoscopic aesthetics and practices were at this time subtly but profoundly varied.

Far from being self-similar apparatuses, stereoscopes come in an assortment of forms and, as I discovered, offer nuanced variations in visual approach and experience. As much as one can read about these variations, involving as they do differences in refraction and reflection thanks to alternative lens designs, nothing compares to actually trying out different stereoscopes one after another in a context that encourages their careful contemplation. Appearing most often in writing about the stereoscope, the Brewster stereoscope (#69040) resembles binoculars, and offers a powerful impression of tunnel vision. Its similarly portably cousin, the Holmes stereoscope (#66435), also accentuate a highly delineated, blinkered media experience through the presence of the edges of the viewer in one’s peripheral vision. On the other hand, the achromatic stereoscope (#48457) uses adjustable lenses to allow for customisation and a highly defined, sharp visual field. All of these stereoscopes expect the user to hold the apparatus to their eyes for each card, lowering it as they swap in a new scene. By contrast, the pedestal stereoscope (#69026) contained in the collection allows users to load up several dozen stereocards and cycle between them while their eyes remain pressed against the viewfinders. This pedestal offers a delicate, perhaps unintended “tilt-shift” lens look, the edges of any pictured scene blurring and scattering thanks to the shape of the lenses, an instability which is heightened as the user makes the scenes rise and fall like the scoops of a water wheel as they cycle between cards. 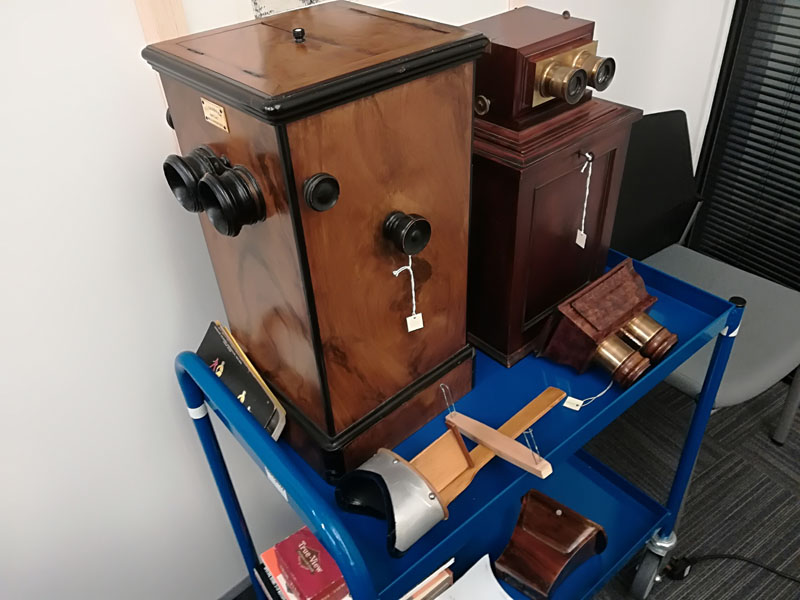 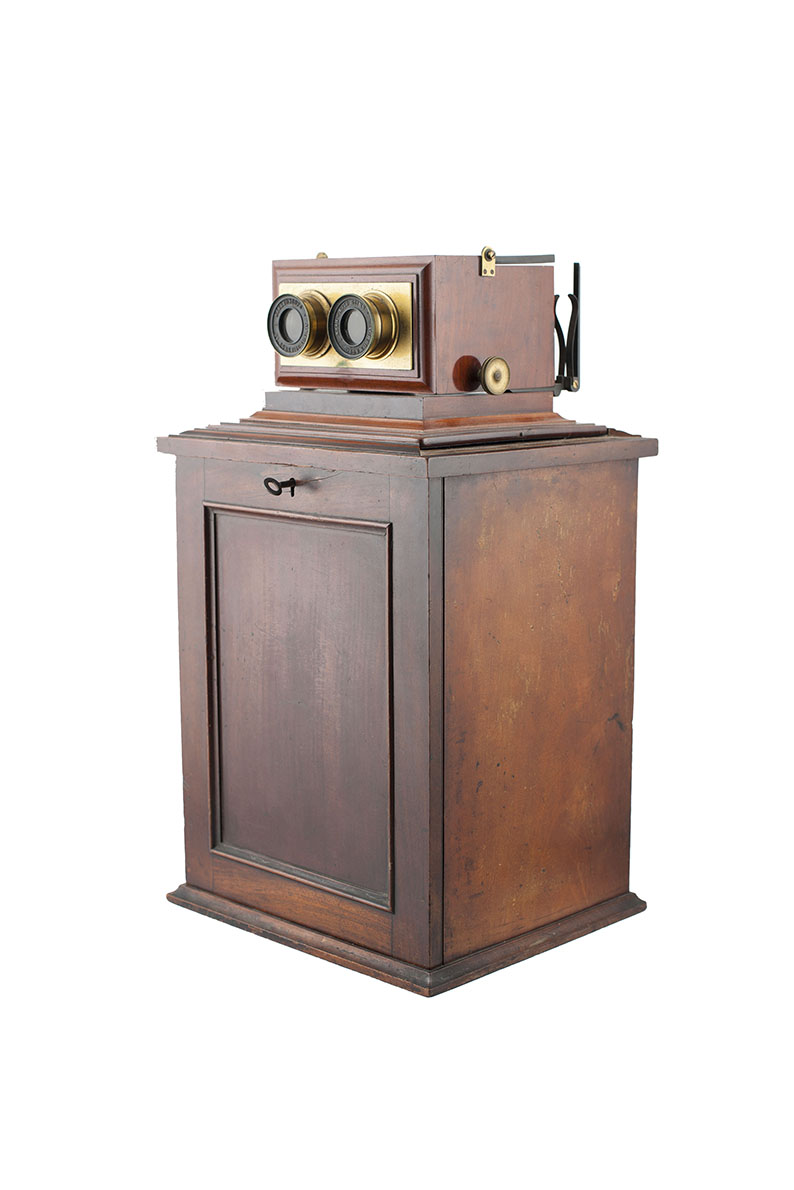 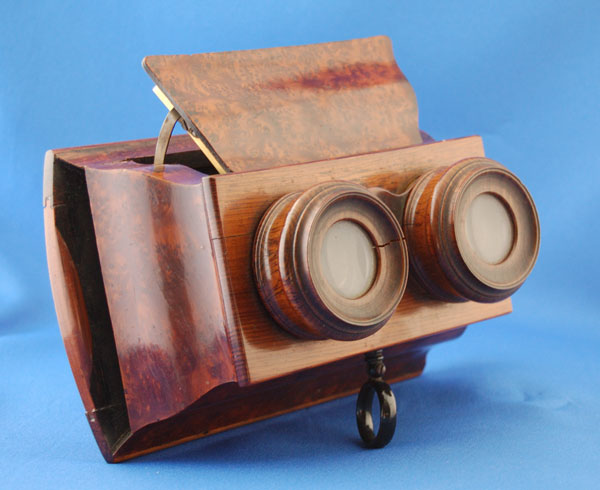 This cycling effect makes the pedestal stereoscope strangely reminiscent of a contemporary screen, since when looking at images using our phone or tablet we will today swipe to discard one shot for another. The cranking of the pedestal’s machinery may not be quite so effortless, but it creates a similarly temporalized immersive experience, one which can be dashed past or lingered over at the viewer’s discretion. Such a thought led me to further consider the links between Victorian stereo culture and today’s screen practices. Broadly, with their eyepieces onto a virtual world for the solo viewer, stereoscopes resemble Virtual Reality headsets like the Oculus Rift in telling ways. But there are more numerous and more intriguing links than this, links which the Bill Douglas collection enabled me to consider.

For example, a series of transparent stereocards printed on glass offer what can only be considered the HD or 4K of their day – a radically sharpened and detailed scene compared to their paper equivalents, and one that re-invigorates an existing media landscape through appeals to amplified aesthetic information and verisimilitude. And then there are stereocards which are actually nothing of the sort: rather than slightly offset images, some offer two identical prints side-by-side, which thus create no sense of depth. Equivalent, perhaps, to low quality media piracy today, these offer a devalued aesthetic experience, containing only the outward trappings of the desired content. Finally, a set of stereocards containing hundreds of views across Italy, with its accompanying map (including red lines describing each stereocard’s vantage point and scope of view) and detailed “tour guide,” removed the burden of having to actually travel to visit an exotic or distant location, just as Google maps and Google Earth do today. 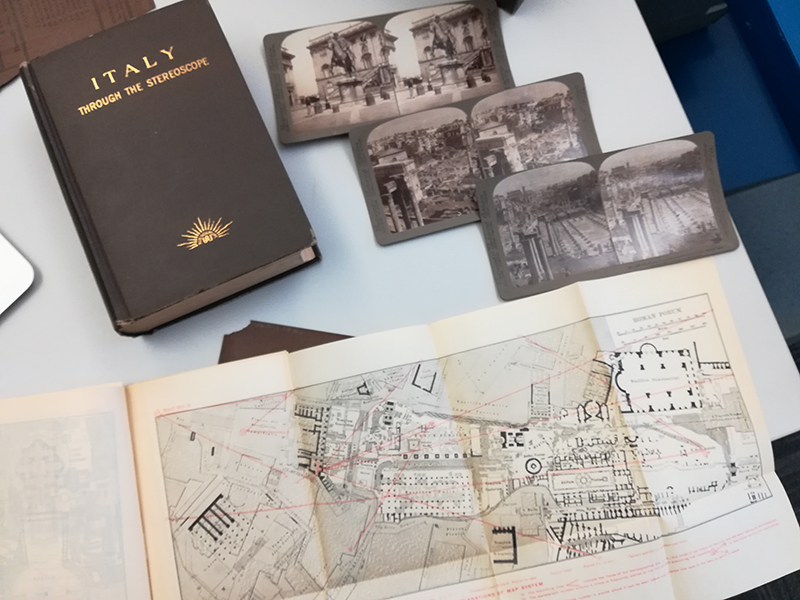 3D is often described as appearing and disappearing from media culture in abrupt waves – as in the adoption of 3D for a scant two years in the 1950s, or the longer, but no less ephemeral, presence of stereocards in the nineteenth century, which are often posited as a “fad” that was quickly forgotten. The items in the Bill Douglas collection – in their diversity, and their testament to consistent cultural interest – certainly belie the latter assertion. More than this, they demonstrate the continuities, rather than the ruptures, between the visual cultures of the nineteenth century and of the twenty-first. For all that our methods of mapping, visualising, and categorising the visual world have radically altered thanks to digital technologies, my tactile handling of the collection emphasised surprising links with today’s “new” media, revealing that epochal techniques of observation, as Crary calls them, might not be as discrete as first presumed.

Nick Jones is a Lecturer in Film, Television and Digital Culture at the University of York. He is the author of Hollywood Action Films and Spatial Theory (2015), and his research has appeared in various journals, including Cinema Journal, New Review of Film and Television Studies, and Continuum. He is currently completing a British Academy Postdoctoral Fellowship on digital 3D cinema, and expects the resulting book to be published in 2019.