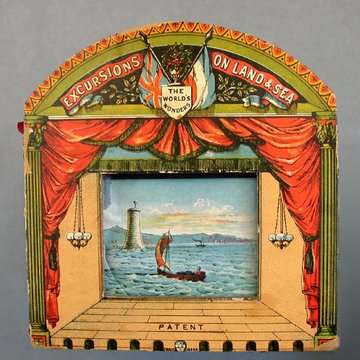 In our latest blog, stipend holder Dr Jenna Ng. Head of Interactive Media at the Department of Theatre, Film and Television at the University of York, discovers the origins of modern virtual reality in our collection of Nineteenth Century Panoramas.

Even as the marketing literature of Virtual Reality (VR) technologies trumpet their experiential newness -- “Oculus radically redefines digital entertainment”! -- they continue to overstate their novelty. Notwithstanding its various engineering innovations (certainly not to be sniffed at), if considered in the historical continuity of media development, VR is little different from the logics of numerous other 20th century developments such as innovations in photography, neo-realist cinema, IMAX, and the World Wide Web, and, going further back, stereophotographs, peep shows, panoramic paintings and dioramas. All share this oscillation between invisibility and visibility, and all, at their heart, contest the line between media and physical reality. Alongside the desire to entertain, astonish and profit, we may also construe a through line consisting of the desire to replace, re-present and reconstitute reality.  The “radical redefinition” of VR’s immersion in new physical and temporal spaces continues a consistent theme in both digital and pre-digital media aesthetics, driven by the “double logic of remediation” (to take David Bolter and Richard Grusin’s still-brilliant presentation of understanding digital media in their 2000 book, Remediation). The engines of this twin logic -- named as immediacy and hypermediacy --  respectively ignore/deny or emphasise/highlight the presence of the medium and the act of mediation interfacing image and reality.

It is on this chain of thought that I started thinking about 19th century panoramas, a medium which took first London by storm, then Europe, followed by the world, before fizzling out almost as quickly as it appeared. More explicitly, I wanted to look more closely into large-scale, immersive re-presented media spaces. The specification of the last -- re-presentation -- is important. Firstly, it distinguishes my study from research of other kinds of large-scale media structures such as Chandra Mukerjee’s wonderful work on Versailles, where she reads the 17th-century Versailles gardens as vast media texts whose architectural and design features create meaning-making spaces. Secondly, it is re-presentation which drives most, if not all, of current VR work with the promise of occupying disparate contextual spaces -- different lands, different eras, different bodies (see work ranging from Edward Relph’s “Spirit of Place and Sense of Place in Virtual Realities” (2007) to Grant Bollmer’s “Empathy Machines” (2017)). In that sense, the parallels are clear with panoramas being the first of its kind to re-present exotic sights on an ambitious scale to a visually hungry audience who wanted to be transported to different realities. With panoramas, dioramas and other pre-cinema optical media being a famed specialist strength of The Bill Douglas Cinema Museum, it has long been on my list of resources to access, and when the chance appeared to apply for their generous researcher stipends, I did not hesitate to seize it to make a much-anticipated visit.

I consulted a variety of material during my visit, primarily books, but also handbills, posters, newspaper cuttings and other archival artefacts such as a charming diorama of “the world’s wonders” through “excursions on land & sea” pulled through a cunningly constructed wire and pulley system. You can see this artefact (EXEBD 69085)in the featured image above and the two photographs below. What I was looking for was a sense of how the immersiveness of panoramas were experienced in its day. Two (interrelated) themes emerged: perspective and realism. 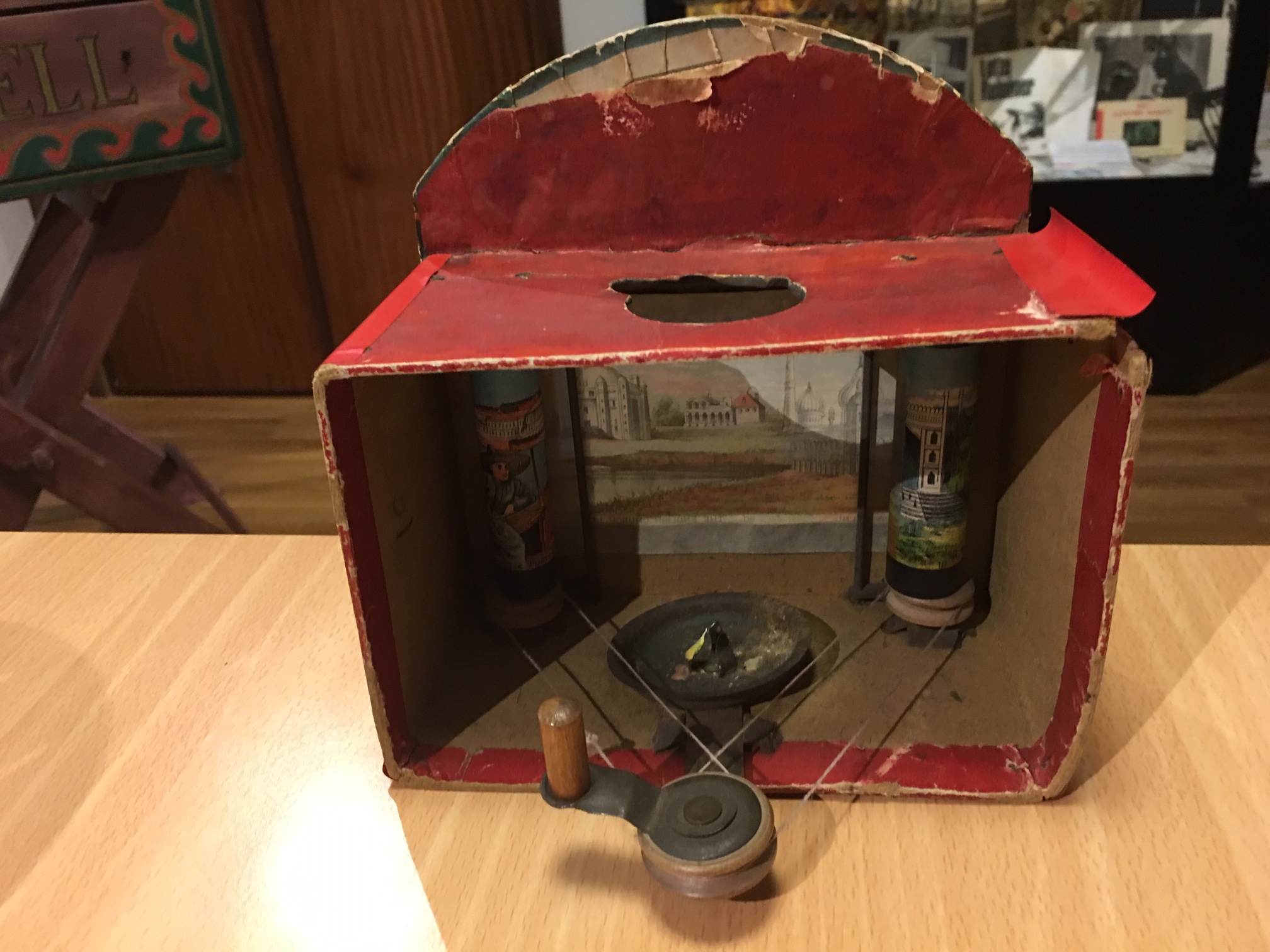 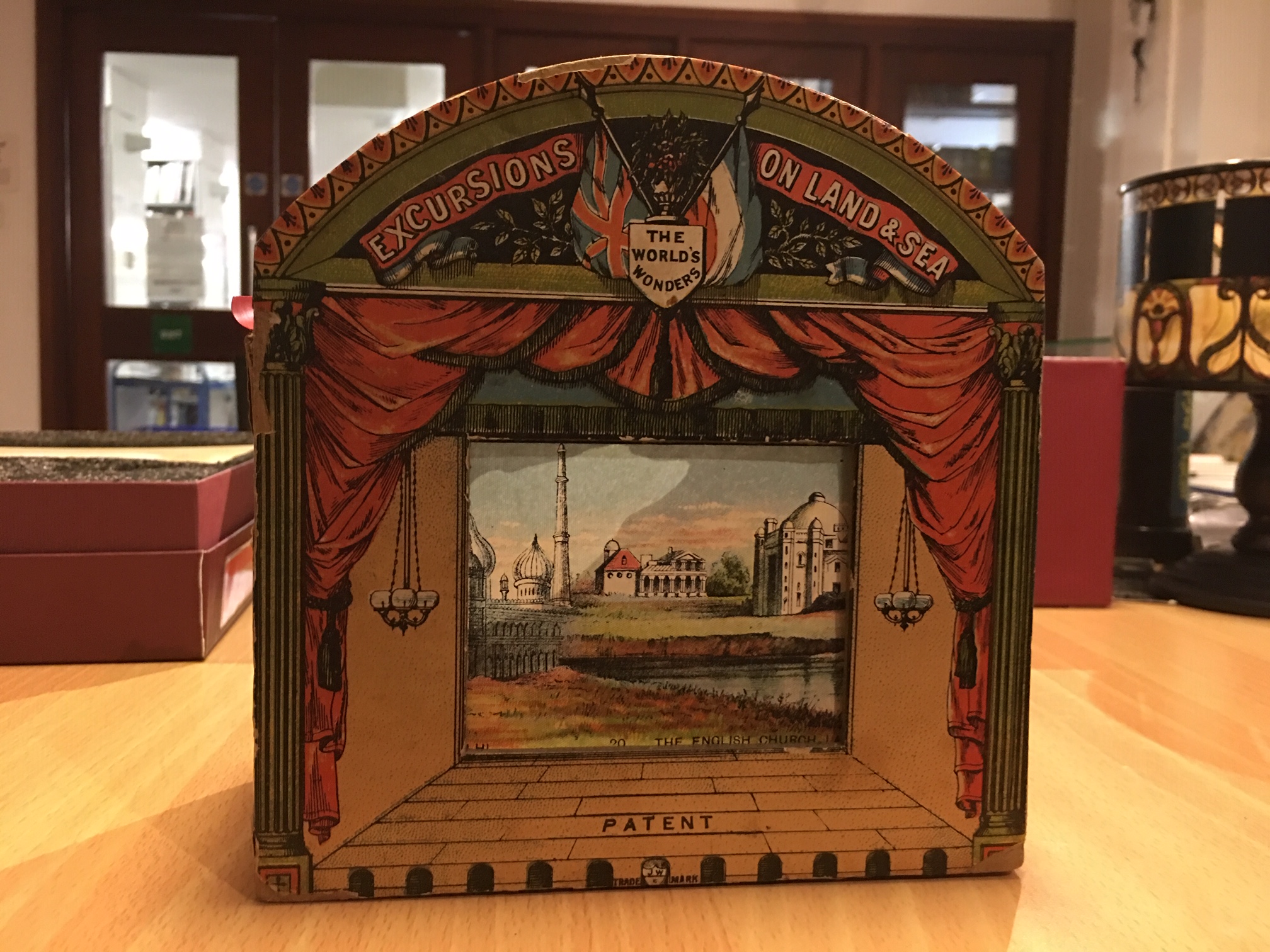 Firstly, panoramas were designed to re-create visual spectacle for a spectator to be viewed on a large-scale from a single reference point to be taken as they traverse the rotunda construct. The famous “small ant on a thimble” metaphor, originally from a reporter describing in Alta California Eadweard Muybridge’s 1878 Panorama of San Francisco from California Street Hill (and later unabashedly reproduced by Muybridge in the marketing literature for his panorama), reinforces this singular subjectivity from a height:

"Let us imagine a small ant wishing to get a comprehensive view of a painted Japanese dinner-plate. He would succeed if he  could get a thimble upright in the middle of the plate, then climb to the top of the thimble and look by turns in every direction."

In this sense, panoramas are similar to VR which, as a technology, also prioritises a point of view of its world placed operationally under the user’s control. Of course, there are also critical differences. Spectators physically move through a large-scale housing in order to take in the panorama, so viewing becomes not simply a visual exercise but one that relies on being perambulatory for its effect. The extraordinary sectional view of “Mr Wyld’s Model of the Earth” (in the Great Globe) as it appears in The Illustrated London News (EXEBD 77256) another artefact at the Bill Douglas Cinema Museum, displays this vividly. 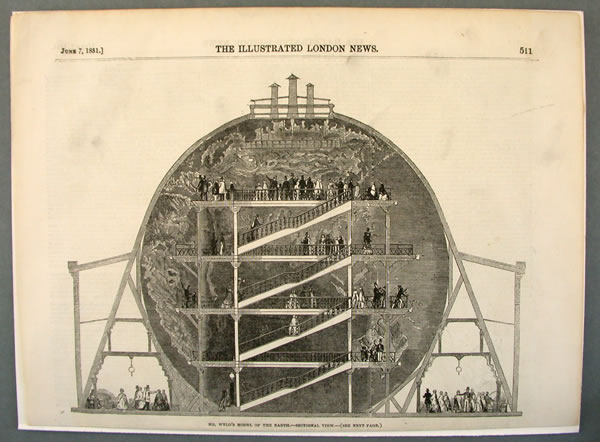 With four viewing platforms in an enclosed giant globe, the spectator would be able to take in the large-scale paintings of different parts of the world in different kinds of situated viewing at different heights, yet with the panorama always surrounding the spectator in perspective. In comparison, perspective in VR relies on pivoted head movements while the user remained in one place, or else allowing for very limited bodily movements in a small area of space of a few steps. These limitations are primarily due to the physical hindrance of cables which connect the headset with the computer, although the prospect of untethered VR is in the horizon. Yet, both media technologies seek in their different ways the common goal of harnessing subjectivity in order to achieve the same result: the transportation of the viewer into a different world by creating audiovisual effects of perspective insisted to be perceived so as to trick the viewer into creating for themselves a believable reality in which they feel they occupy.

However, the perception of reality is more than just audiovisual effect; it is also neurological, as neurons and electrical impulses carry, and the brain processes, physical stimuli in order to make meaning. It is in this gap that immersion succeeds or fails, primarily where the brain is unable to adjust to perceptions of movement and height differentials. In this respect, it was also interesting that the same phenomena of dizziness or sickness are reported for both VR and panoramas. For VR, the Oculus Rift’s Health and Safety manual specifically warns how “some people (about 1 in 4000) may have severe dizziness, seizures, epileptic seizures or blackouts triggered by light flashes or patterns”). This echoes the oft-quoted stories of Princess Charlotte of Mecklenburg-Strelitz being seasick on viewing a panorama depicting the British navy at Spithead, as well as various reports of “airsickness”: viewing the panorama in Thun, Switzerland, “on the platform the spectator felt as if he were on a trip through the town in seven-league boots.”

This exploitation of subjective perspective leads to the second theme, which is the drive for an all-encompassing realism common to both technologies. Besides subjectivity, numerous other visual tricks were employed to create an effect of realism, such as concealing all borders of the canvas with an umbrella-shaped room (velum) for the upper edges and either a projecting platform or a false terrain for the lower. The distance between the spectator and the canvas also prevents the spectator from looking too closely at the paintings, and the design of the housing construction is such that audiences first enter through a dim corridor before they climb the stairs to the viewing platform, so that the paintings are viewed in illusorily brighter colours.

What is interesting is how many parallells there are with VR headset design: the display screen is similarly encased (in a box construct) so that its borders are not visible; foam cushioning helps prevents too much light entering into the construct; the scene is lit by the screen’s light-emitting pixels rather than tricking the eye to adjust between light and darkness. This drive for realism forms the central appeal for both technologies: VR advertisement today urges viewers “to get lost in the world of virtual reality” (Samsung Gear), to “immerse yourself in games or go inside your favourite films” (Oculus Rift), to “immerse yourself in new experiences” (Google Daydream). The handbills for panoramas, all of 200 years ago, likewise emphasise this promise of realism. The programme for the Poole’s moving panoramas, for example, stress the “sights of the world”, “perfect in every detail” (EXEBD 17875)and how “a most Gorgeous Mechanical and Dioramic Panstereorama of Venice” promises to introduce “the most enchanting and realistic effects conceivable”. 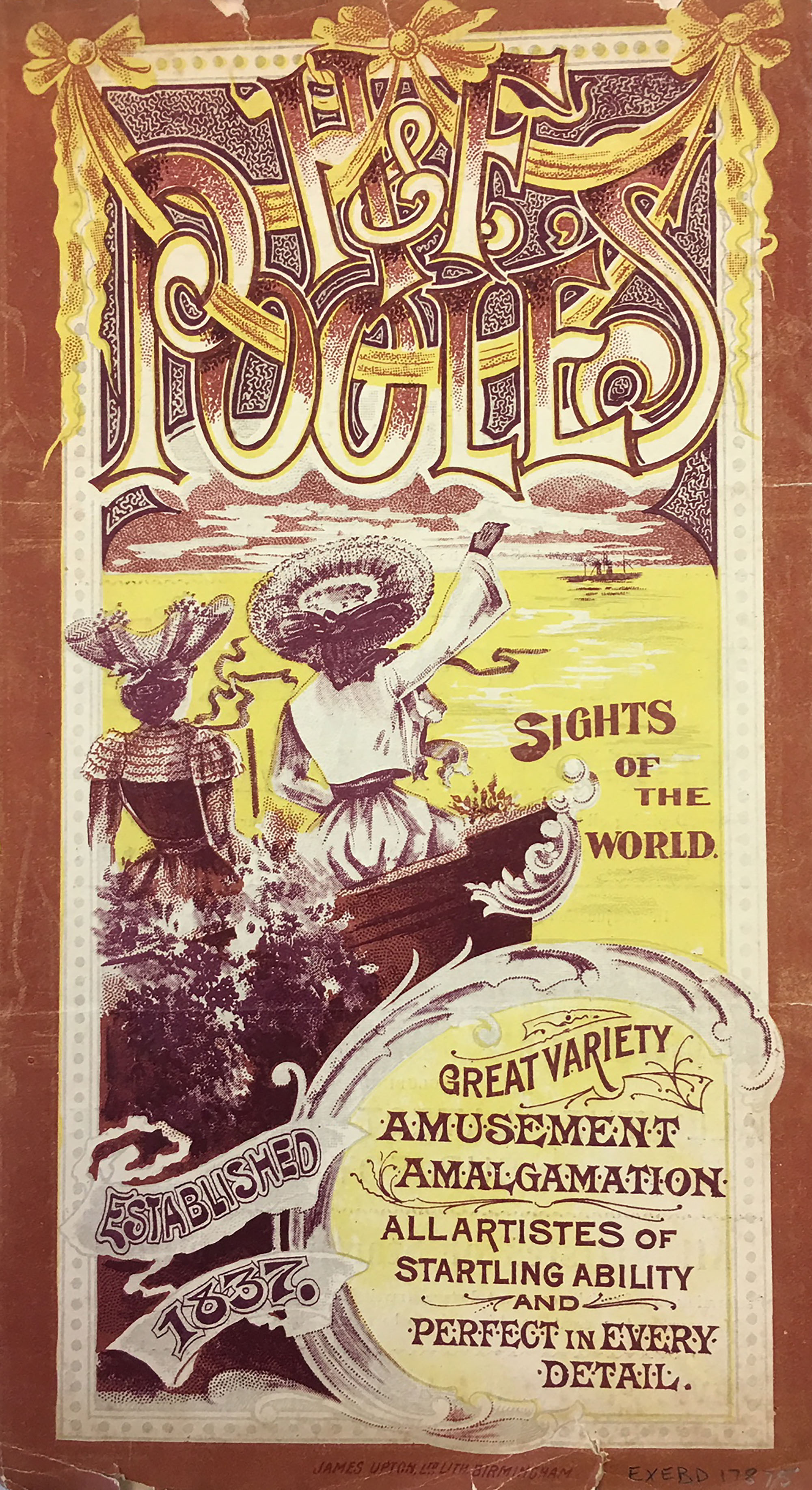 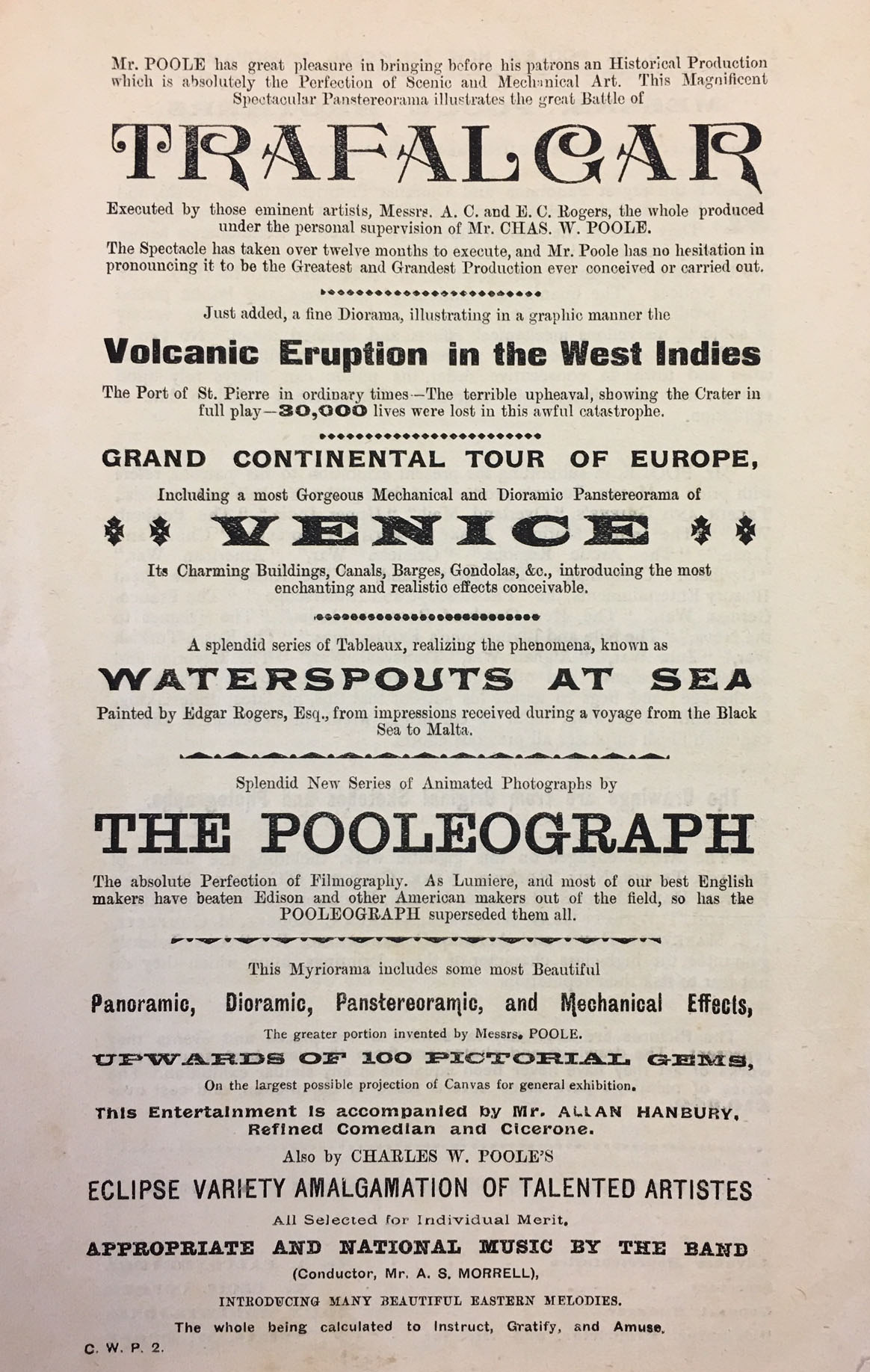 The handbill of Burford’s panorama in Leicester Square of “ROME” reproduces the Morning Herald of February 26th, 1839 (EXEBD 77718).

"Never have we had more occasion to feel grateful to this consummate Artist, and his truly creative Pencil, than on this occasion, when he conjures to our view, as if it were nature herself -- this most interesting spot upon the earth’s surface. [Emphasis added]" 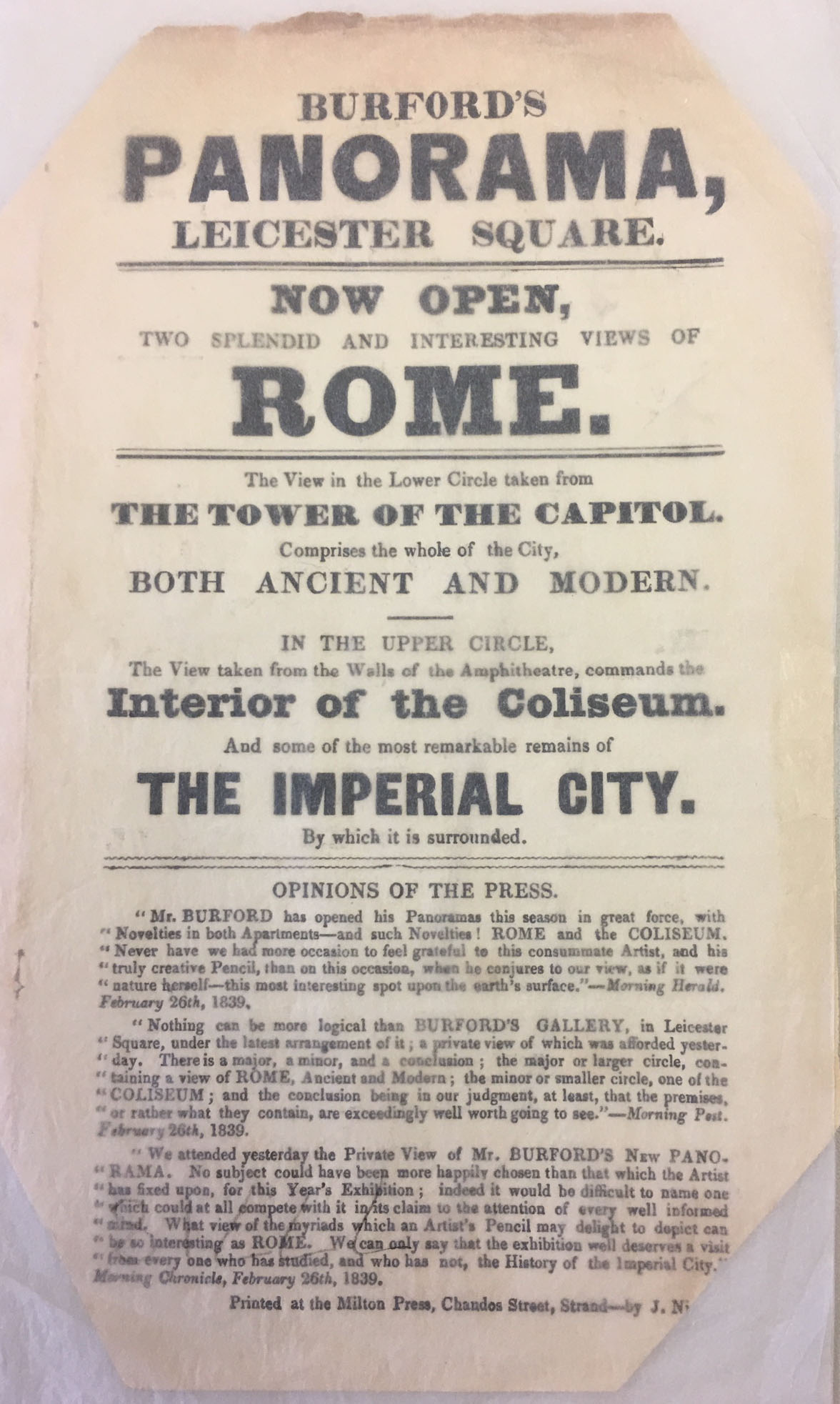 Again, the tension between immediacy and hypermediacy is evident, as both technologies strive to simultaneously proclaim and deny the artifice of the scenes. But the final critical line remains to be drawn between 19th century panoramas as possibly the first large-scale, immersive reproduced media form to contemporary VR: the cultural significance of this craving for the image as an experience. The 19th century audience was hungry for visual experience; writing of the Mesdag Panorama, the catalogue talks of “the visual thirst” of the 19th century citizen. Colonialism likewise increased the demand for experiencing foreign lands, achieving visual conquests in tandem. But what about the 21st century audience? What are we trying to grasp, as a culture, of the ubiquitous screen and the incessant image? Baudrillard talks of “the ecstasy of communication” in our current visual culture, where “there is a whole pornography of information and communication”, “the obscenity of the visible, of the all-too-visible, of the more-visible-than-the-visible”. From panoramas to VR, then, caps out this historical lineage of the enclosing image -- with obscenity. What had been yearning before now becomes gluttony. In that respect, it is important to remember from where the appetite emerged.