Our new blog comes from stipend holder Dr Malcolm Cook from the University of Southampton. Malcolm used our collection to look at the history of 'useful' animation, particularly in forms such as the magic lantern where moving or transforming images are used to educate or instruct.

The history of animation has typically been concerned with its use for entertainment or art. However, animation has also often been utilised to educate and persuade in fields such as science, teaching, and advertising. Animation inherited from earlier practices the simplicity of graphic forms, such as diagrams, and the appeals of personality and eye-grabbing design, such as the use of anthropomorphism. Allied with the movement allowed by moving image techniques, animation shaped, and was shaped by, new spheres of knowledge and expertise in the twentieth century. The recent interest and growth in the study of ‘Useful Cinema’ (Acland and Wasson 2011) provides a framework and impetus for exploring this hidden history. I have been collaborating with Michael Cowan (St Andrews) and Scott Curtis (Northwestern University in the USA) to develop research into this field of ‘Useful Animation’ and a stipend as visiting researcher at the Bill Douglas Cinema Museum offered the opportunity to explore this topic and its genealogy in pre-cinema.

Animation scholars visiting the Bill Douglas Cinema Museum might naturally gravitate towards several of the collection’s outstanding resources. The museum holds a vast array of the optical toys that preceded cinema, but which also continued in popularity into the twentieth century. These afford an opportunity to reflect on definitions of animation, opening questions about whether animation is inherently tied to cinema or precedes or exceeds it, and its role in present day new media (topics raised in Birgitta Hosea’s and Seth Giddings’ earlier blog posts: https://www.bdcmuseum.org.uk/news/animated-loops-from-print-to-instagram-by-birgitta-hosea/ https://www.bdcmuseum.org.uk/news/handheld-cinema-or-the-other-successful-toys-that-move-by-seth-giddings/). In contrast, the Robin Allan Collection held by the museum gives a window onto the Disney studio, for many people the very definition of animation. Allan, the author of Walt Disney and Europe: European Influences on the Animated Feature Films of Walt Disney (recipient of the 2001 Norman McLaren/Evelyn Lambart Award for Best Scholarly Book in Animation) bequeathed his comprehensive library of books about Disney and animation, as well as a unique collection of documentation, correspondence, and ephemera relating to his research.

Beyond these animation resources, however, the museum’s holdings are equally a rich source for exploring ‘useful animation’ practices, and especially their precedents in earlier intermedial forms. The museum’s extensive collection of magic lantern slides and associated publications allow us the chance to trace underlying professional and popular interests in the use of screen-projected drawing and diagrammatic forms to depict transformation and metamorphosis that are first expressed in earlier technologies before being more fully realised through moving images.

A series of medical slides manufactured by E.G. Wood of London (est. 1854) includes a slide showing ‘the changes undergone by the jaw during childhood and old age’ (Fig. 1 72603/2) with two hand-drawn diagrams. 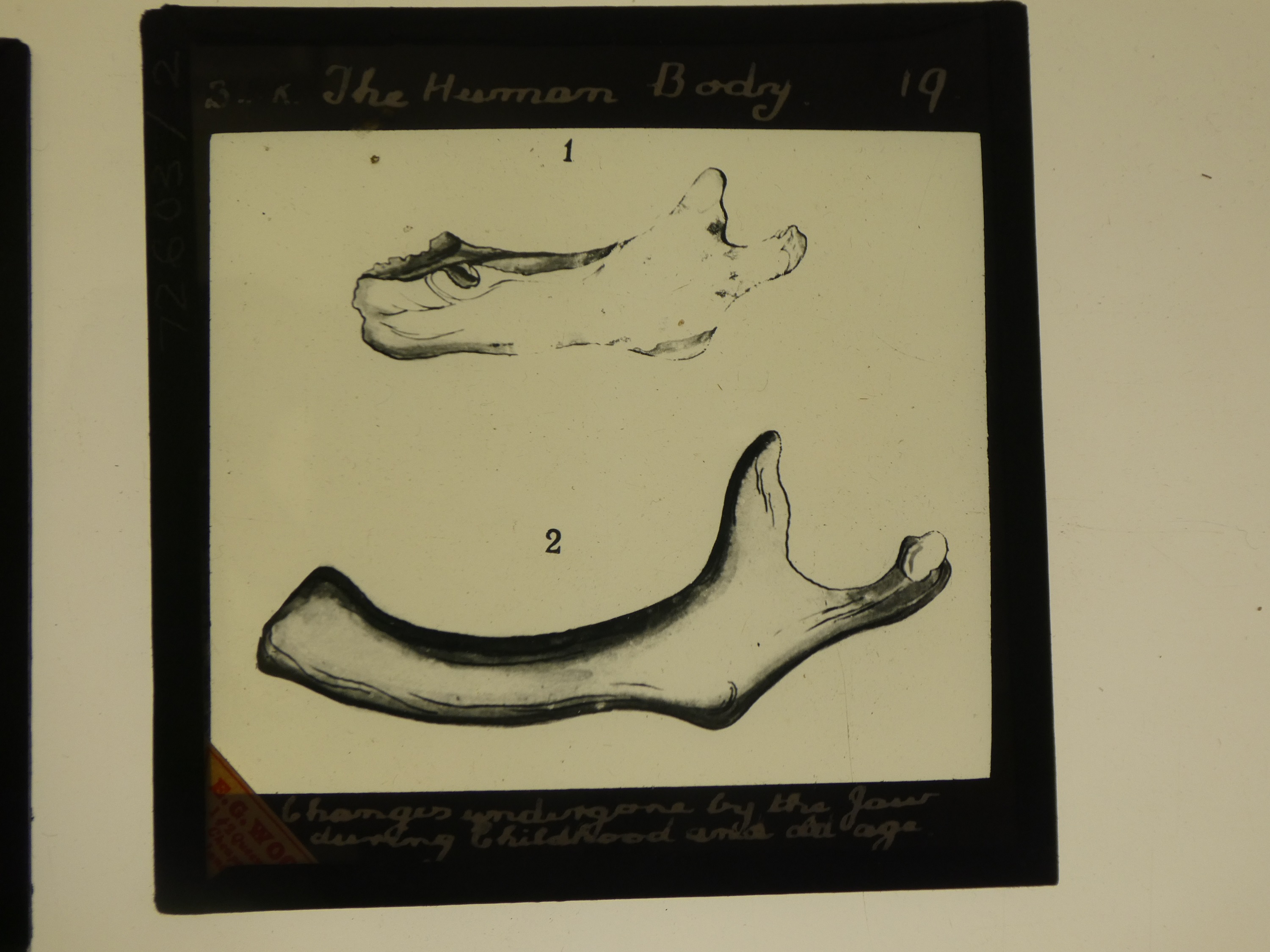 The caption and numeric labelling both indicate a simple temporal change relating to human development and ageing. Another slide, possibly from the same collection, depicts the ‘effects of tight lacing shown on form of skeleton’ through two side-by-side images of a human rib cage (Fig. 2 72603/1). 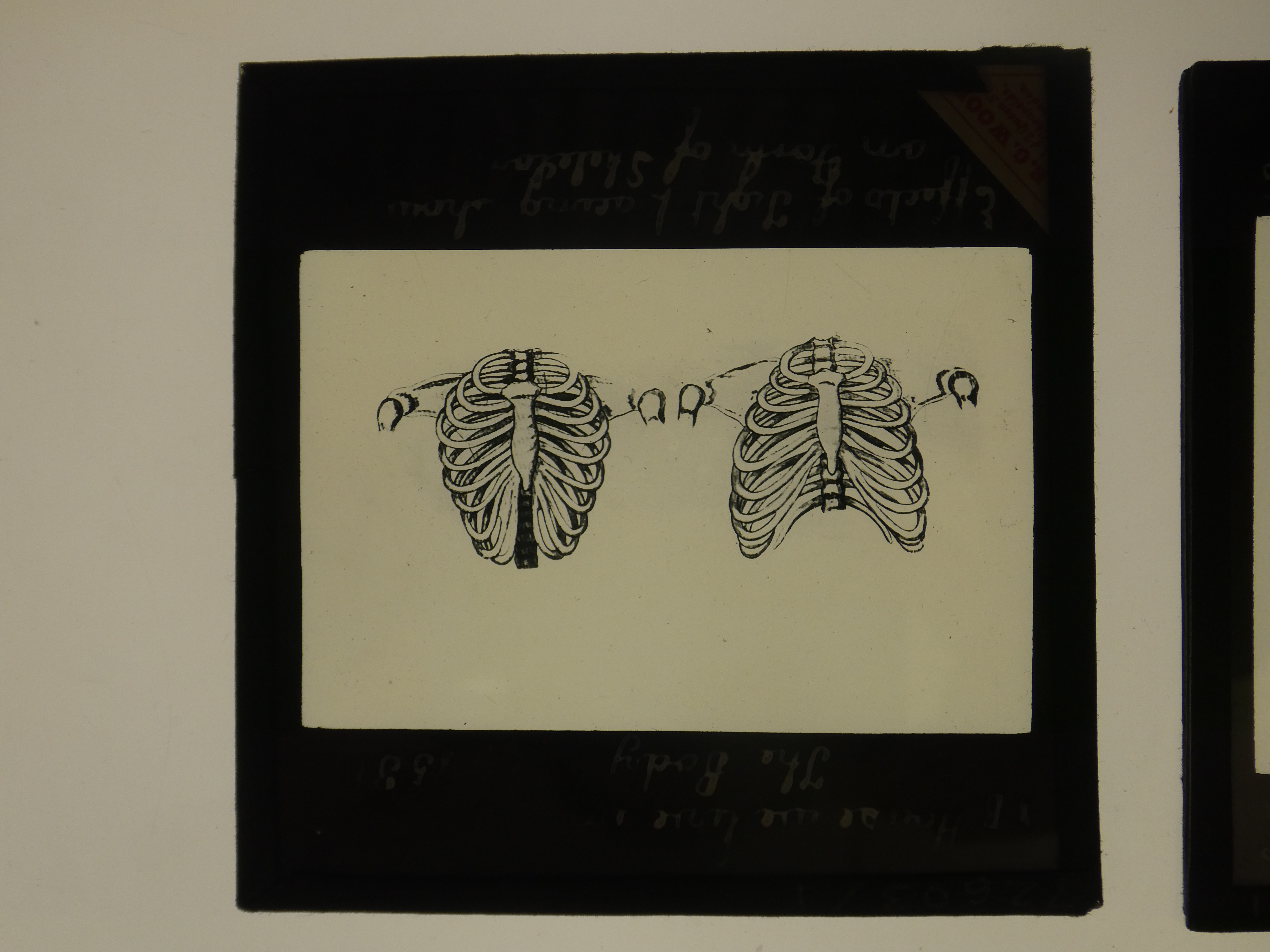 One ribcage is seen in its natural shape, the second disturbingly compressed because of the use of tight-laced corsets, a matter of considerable concern to medical professionals in the nineteenth century (https://www.rcseng.ac.uk/library-and-publications/library/blog/effects-of-the-corset/). Through these serial drawings, the human body is shown not as a fixed and ideal form, but as something that changes even during adulthood and as a result of social practices, and in this latter case heavily gendered ones. The viewer of such slides would necessarily have imagined the interim phases between the ‘keyframe’ images in the slides, a process that would also have been prompted by the lecturer or teacher displaying the slides.

These slides demonstrated the benefit of using drawings to depict temporal change, but similar examples also highlighted the continued limitations of static glass lantern slides and imply a desire for other ways to communicate transformation or spatial relationships. A slide showing the development of lepas anatifera (a species of barnacle) includes six small drawings on one slide, yet the slide itself gives no indication of the progression or relationship between them, presumably relying on a lecturer to interpret the illustrations and direct the audience. The limitations of static two-dimensional drawings to communicate complex three-dimensional structures is also seen in other biological slides. The slide ‘vertebral column’ (Fig. 3 72602) includes five smaller drawings and while the parts are labelled from one to five, their order communicates a spatial, rather than temporal, relationship. 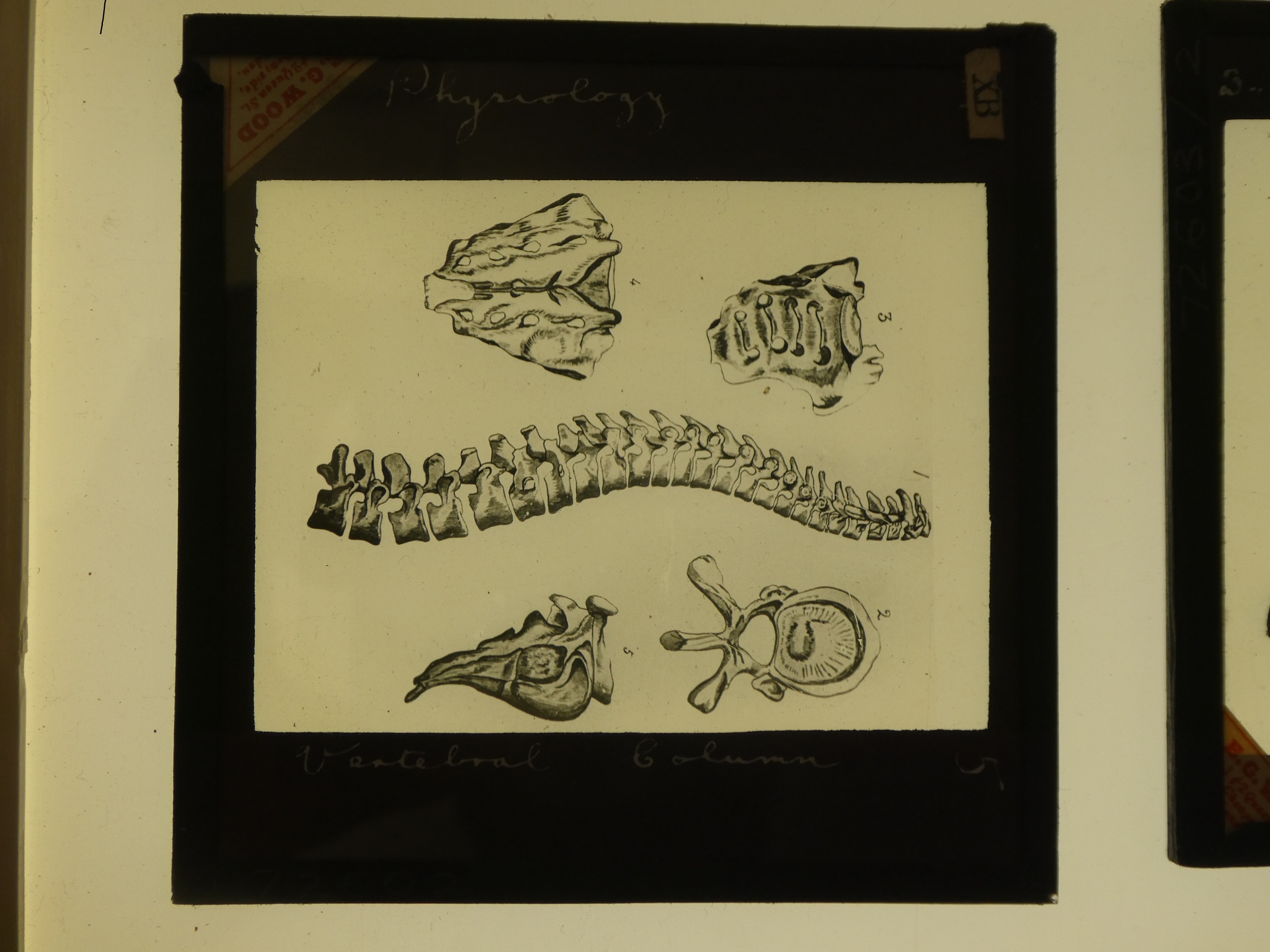 Each drawing shows parts of the spine from different viewpoints, relying on the viewer’s imaginative reconstruction of the three-dimensional referent. The simplified diagrammatic form of the drawings allows clarity of expression, and it equally anticipates later uses of animation to communicate the three-dimensional shape of a skeleton through a mobile viewpoint, whether in 1950s instructional films (e.g. https://wellcomecollection.org/works/dhhj8fgb) or recent CGI enabled models (e.g. https://www.zygotebody.com/).

The museum’s holdings of material relating to astronomy are perhaps the most telling example of the way movement and transformation were increasingly central to nineteenth century scientific understandings of the world and were being communicated to a popular audience through educational materials. These exhibit a desire for more dynamic forms of communication that would later be fulfilled by cinematic animation.

A collection of astronomical prints first published by James Reynolds in 1846, and in print throughout the latter-half of the nineteenth century, evinces a consistent concern with planetary change and transformation, whether it is the observable cyclical phases of the moon or the extended deep time of Earth’s geology (Fig. 4 70360). 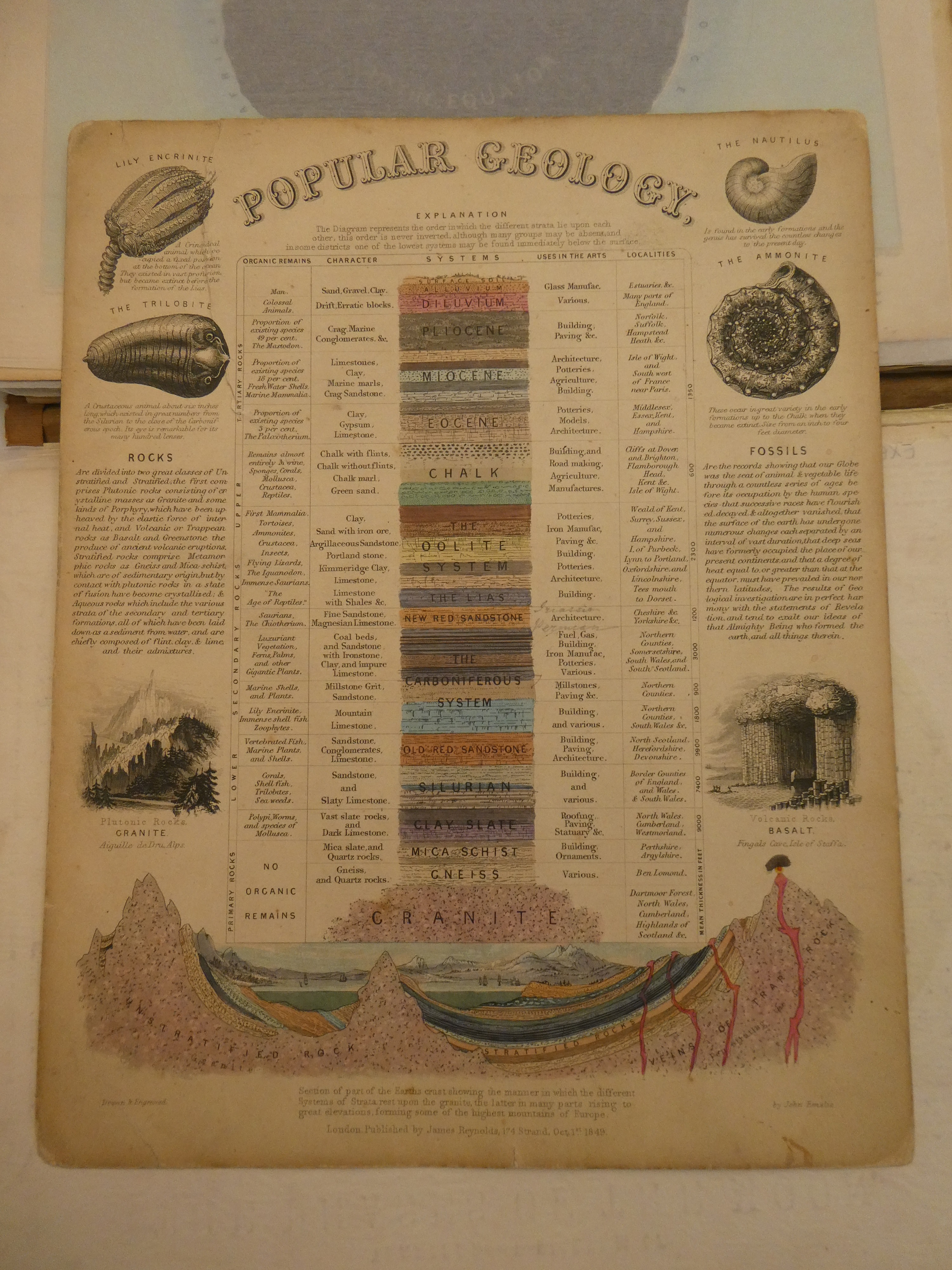 As well as drawn diagrams illustrating these dynamic processes, these prints adopt innovative presentation practices to extend them beyond the printed page. Some have holes in the printed page and are backed with tissue paper so that when they are held up to the light they create illuminated scenes. A ‘Geographical Diagram of the Earth’ (Fig. 5 70360/1) is made up of multiple cardboard parts, with circular cut-outs of the globe that can be manipulated and animated by the reader to demonstrate various principles of the Earth’s movement. 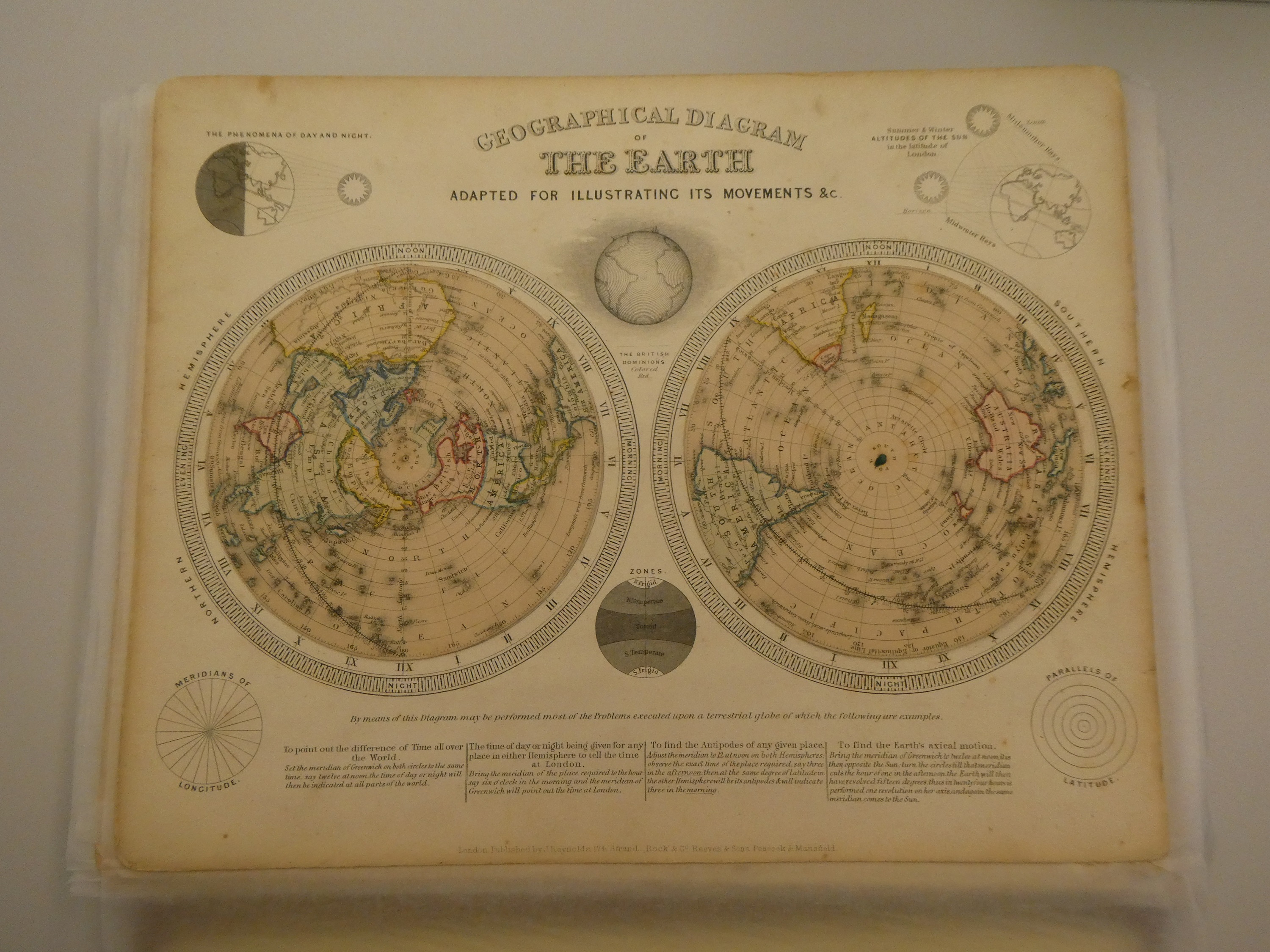 Astronomical magic lantern slides in the museum collection present further evidence of the desire to push beyond the static form of print or conventional lantern slides and use movement to communicate new understandings about the universe. An attractive box of wooden mounted glass lantern slides features similar content to Reynolds’ publication, such as the relative sizes of the planets in our solar system and an explanation of Earth’s seasons due to the relative tilt of the planet’s axis of rotation. Notably, several slides feature moving parts to demonstrate and communicate movement and change. One slide uses a slipping glass mechanism to animate the eclipse of the moon (Fig. 6 64091), and two others also use similar mechanisms to illustrate an eclipse of the sun and phases of the moon.

Another slide has a lever with pivot mechanism to turn a ship around the surface of the earth to demonstrate through movement the rotundity of the earth. (Fig. 7 64091).

Astronomical publications and slides like these allowed a popularisation and democratisation of knowledge that previously required access to devices such as an orrery or a globe, which used animated mechanisms to demonstrate dynamic systems. They also anticipate animated films in the twentieth century that would use moving images to educate audiences about astronomy, such as the Fleischer’s Eclipse of the Sun (released as part of the Goldwyn-Bray Popular Science Segments in 1918) or the National Film Board of Canada’s film Universe (1960), or indeed planetarium presentations.

The Bill Douglas Museum collection contains many further opportunities to explore this alternative tradition of ‘useful animation’. Animated movement was not only important as it was constituted in the subjects studied by experts, but was also a way to engage and educate audiences, whether school students, professionals being trained, or the general public. This awareness of the power of movement to animate audiences would be utilised in other fields, such as advertising, with a number of fascinating examples in the collection. Equally, the extensive library of books and other printed matter in the collection, such as catalogues of magic lantern slides, provide evidence that the examples raised here are simply the lucky physical survivors, indicative of a much larger volume of production. Today we are constantly surrounded by ‘useful animation’ whether it is specialist use of data visualisation or public communication in the form of infographics and advertising, but there is a much longer history of these practices still to be rediscovered.

Malcolm Cook is Associate Professor of Film Studies at the University of Southampton. His book Early British Animation: From Page and Stage to Cinema Screens was published by Palgrave Macmillan in 2018. He is currently researching the role of advertising in the history of animation, and has written several chapters on this topic, which appear in The Animation Studies Reader (Bloomsbury, 2018) and Aardman Animations: Beyond Stop-Motion (Bloomsbury, 2020), and has co-edited (with Kirsten Moana Thompson) the recently published collection Animation and Advertising (Palgrave Macmillan, 2019).