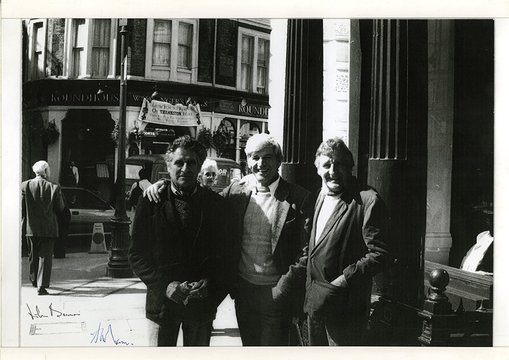 Today would have been the 100th birthday of collector and film historian Bill Barnes. Bill, who was a great friend of Bill Douglas and Peter Jewell, died last year. Here is the tribute we put on the website to mark his passing.

We were sorry to hear that the film historian and collector Bill Barnes recently passed away at the age of 99. Bill was one of the foremost of a great generation of collectors of cinema artefacts and ephemera and was a leading authority on many aspects of the optical media that preceded cinema and in particular of the early years of cinema itself. With his twin brother John, who died in 2008, Bill assembled an amazing collection of artefacts that formed the Barnes Museum of Cinematography in St.Ives, Cornwall. In the late 1980s the collection was sold to the Museo Nazionale del Cinema in Turin, where you can still see its wonders on display, with some British material going to Hove Museum. The brothers received an honorary doctorate from the University of Stirling in 2006.

John was known for his writing on early cinema, including his seminal multi-volume history The Beginnings of Cinema in Britain (published by the University of Exeter Press) while Bill led the collecting, which he continued all his life, but in recent years he also wrote extensively himself, particularly for The Magic Lantern Journal.  Bill was also a great friend of Bill Douglas and Peter Jewell and in the last decade or so he and Peter met regularly to trawl the book fairs and second-hand stalls for items of interest. The picture shows Bill, John, and Bill Douglas in Soho in the late 1980s.

Bill was a huge source of knowledge and enthusiasm on cinema and loved the history of the moving image. In his last days he is reported to have said “ Hell doesn’t want me. Heaven doesn’t want me, I’ll go to Hollywood!’  Bill also kindly bequeathed The Bill Douglas Cinema Museum some splendid Chaplin toby jugs and we are very grateful for his support for the museum over the years. Our thoughts are with his partner Karin and his many friends in the film world. .