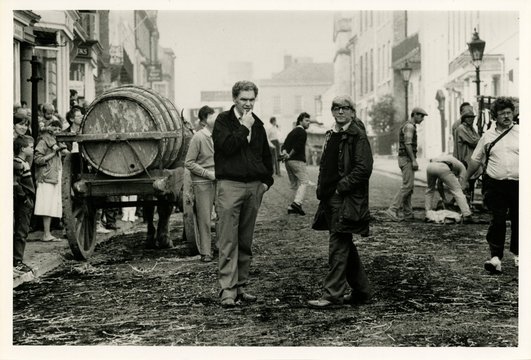 We are very sad to hear of the death of Simon Relph, the Producer of 'Comrades' and great supporter of Bill's work. Simon helped Bill realise his vision and create a wonderful film that has become increasingly acknowledged as a masterpiece in recent years by audiences all around the world. Here is a photograph by David Appleby from the set of 'Comrades' showing Bill and Simon filming in Dorchester. Simon went on to be producer of Bill's final project, 'Flying Horse', his script about the photography and film pioneer Eadweard Muybridge, although Bill Sadly died before filming could begin.

Simon was a hugely significant figure within the British film industry, who ran the state financier British Screen in the late 1980s and was a chairman of BAFTA. He produced many important films through his companies Greenpoint and Skreba. He was previously an assistant director working on films including 'Reds' with Warren Beatty. Simon was the son of the distinguished producer Michael Relph who made films from the 1940s, notably in collaboration with Basil Dearden and our donor, Don Boyd.

Simon was a great friend to the museum, always helpful and charming, and a tireless advocate for Bill Douglas's greatness as a filmmaker and for the importance of cinema. He was very popular with those he worked with and will be much missed.