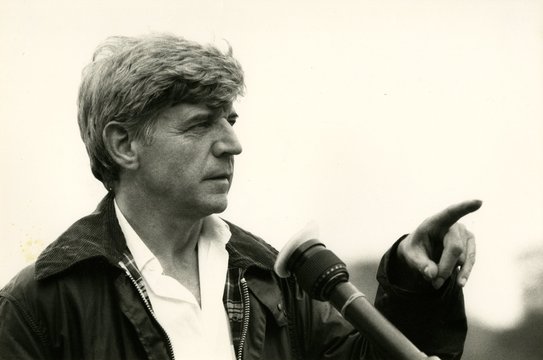 The latest blog from the research stipends awarded last year is from Cara Fraser. Cara is a PHD student at the University of Dundee and examines the influence of Bertolt Brecht on Bill Douglas and his film Comrades.

Epic Theatre is a theatrical movement and theory which was developed in the early-to-mid twentieth century as a response to both the political climate of the time and the more ‘traditional’ theatre of the past. Its aim, essentially, is to engage the audience intellectually by destroying the illusion of reality which is perpetuated in naturalistic, ‘Aristotelian’ drama; to make them aware that they are an audience watching a play, and that that play has an important moral or political message for them. The term ‘Epic Theatre’ was coined by Volksbühne director Erwin Piscator, but is defined by German director and playwright Bertolt Brecht. Brecht developed the theory of the V-effekt, theatrical techniques meant to force the audience out of silent complacency and into active engagement with the play’s message. He died in 1956, years before Bill Douglas ever made a film, but, as Bill’s friend and fellow collector Peter Jewell explained during my interview with him, Brecht still “often popped up in Bill’s life in weird ways.”

Some of the books held by the museum on the work of theatre writer and director Bertolt Brecht.

Jewell was present, although Douglas was still in Egypt at the time, at the first ever Brecht play shown in the UK, a production of Mother Courage and her Children in his home town of Barnstaple directed by and starring Joan Littlewood, a notable epic theatre director, and her Theatre Workshop Company in 1956. Peter calls the play’s programme, which he still keeps in his archives, “the historic document which started everything”  as when Douglas returned home, Jewell suggested that he join the Theatre Workshop Company, where he would become Joan Littlewood’s personal assistant for a year. As he began making films of his own, he came to ‘greatly admire’ Lindsay Anderson and Richard Lester, again both notable epic directors, and seek their opinions on his work. Shortly before the making of Comrades, Jewell and Douglas met, by chance, with Brecht’s widow, the actress Helene Weigel in Berlin, and spent a day discussing acting and directing with her. On another visit to Berlin, they became friendly with an all-black troupe of actors from the US who were touring with The Caucasian Chalk Circle, and both were ‘immensely interested’ by their work. These ‘weird’ but wonderful Brechtian interventions affected both Bill Douglas’ life and work, and the influence is felt most intensely in Comrades. 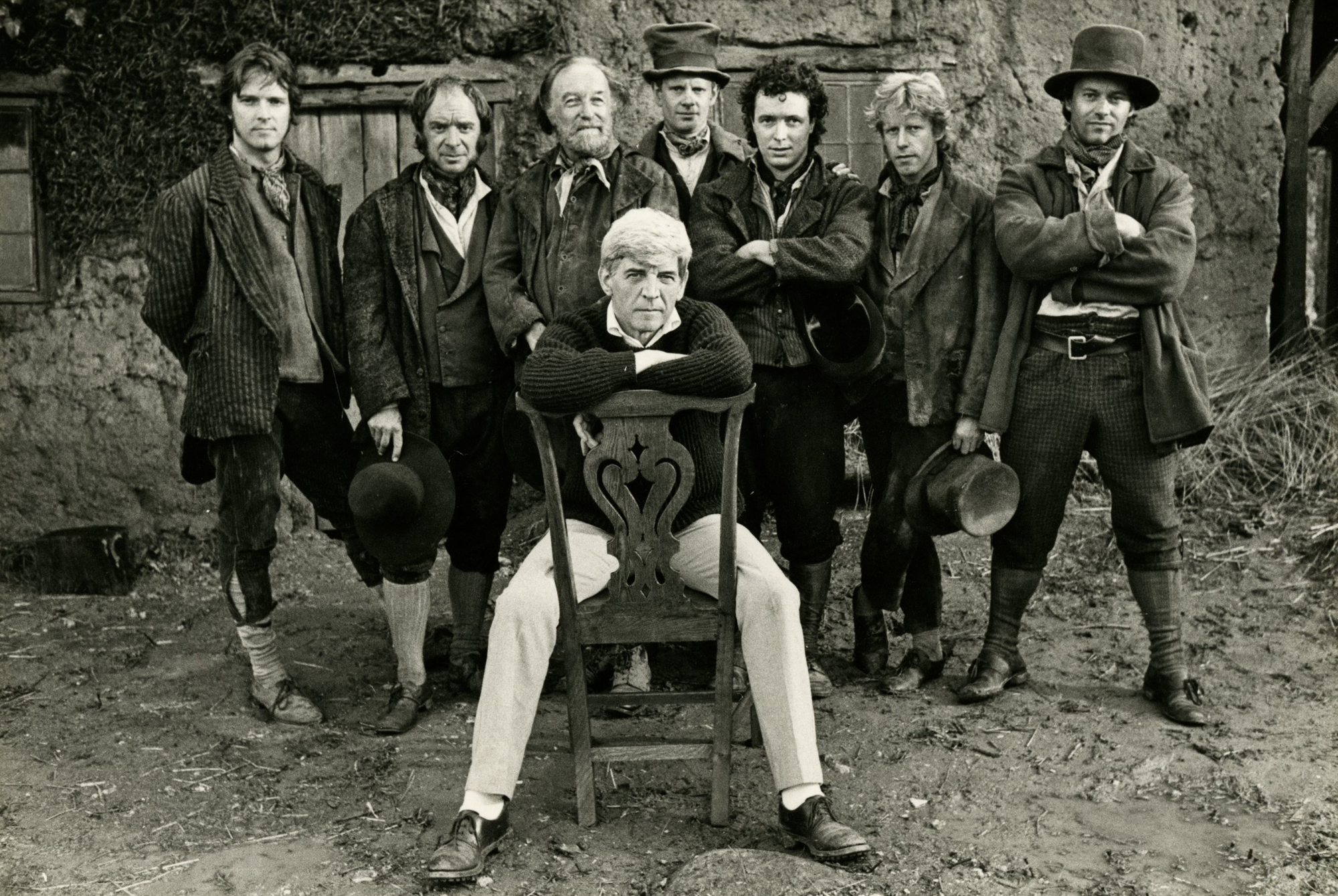 Bill Douglas with actors playing the Tolpuddle Martyrs in Comrades

The film tells the story of the Tolpuddle Martyrs, a group of Dorset labourers deported to Australia for forming a trade union in response to falling wages and poor treatment by their landlord. They and their supporters back home fight their case, and they are eventually returned home with a pardon. Released in 1986, Comrades – despite Douglas’ protests that that the film was only political ‘with a small ‘p’’ – reads as an allegory for the widespread strikes and mine closures in the 1980s, as well as a biopic of 1830s trade unionists. Similarly, Brecht in his plays drew upon well-known past events and figures – for instance, Galileo – in order to suggest parallels with the current day. And he suggested strongly. The plays’ moral or political messages were echoed over and over again in didactic speeches, songs, and direct-to-audience addresses; techniques which Douglas adopts in Comrades, having his characters sing union songs and speak to both one another and the audience about the values of unionisation and socialism. 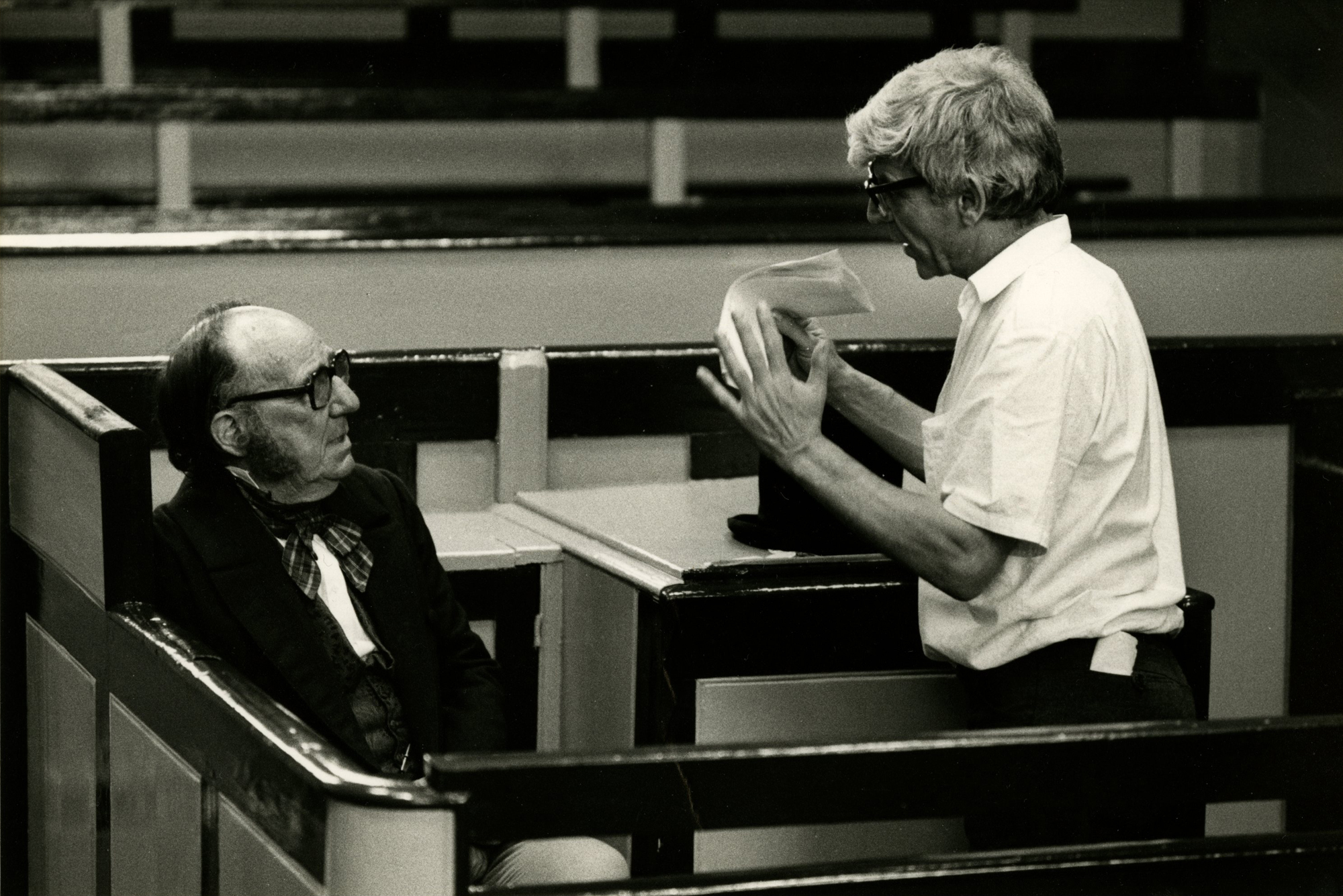 However, as I mentioned, Douglas denied strong political sentiment in Comrades, saying that he ‘wasn’t really interested in the political aspect of the story at all, more in the optical transformations and the human relationships.’ Comrades opens with a shot of a bright, white disc which is slowly eclipsed by a black circle. It could be a solar eclipse, or it could be seen as a lens cap being placed over the projector. At the close of the film, the opening shot is repeated, but this time is revealed to be the projection light from the lanternist’s magic lantern. Here and throughout the film, Douglas employs visual effects stemming from early cinema and pre-cinema. At the Bill Douglas Cinema Museum, I was able to peruse the brilliant collection of cinematic whats-its and thingamajigs, some of which had been used as props in Comrades, to identify the many devices and effects in the film. For instance, there are scenes filmed as seen through the showman’s diorama, shown in silhouette as though in shadow theatre, or filtered through a magic lantern. 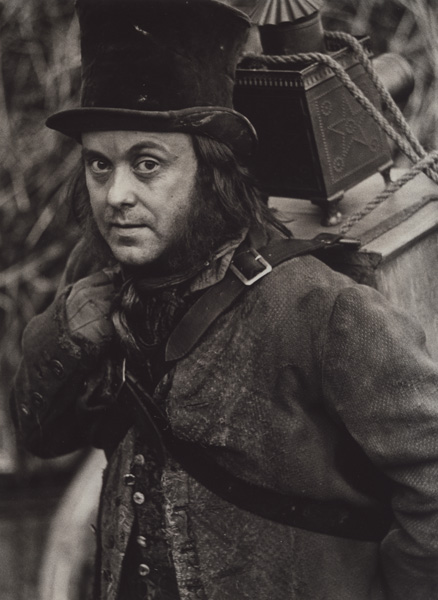 Alex Norton as the lanternist. Norton appears in 13 guises as pre-cinematic showmen.

Explaining why the theme of optical illusions and the pre-cinematic features so heavily throughout Comrades, Douglas said: ‘what I wanted to suggest was the magic of things, rather than just depict them accurately.’  While Douglas certainly achieved his goal in making the film, the references to films, filmmaking and its pre-cinematic ancestry function also, in a way, to achieve the opposite effect: they function as a ‘reality-check’, as well as an allusion to magic. By so heavily featuring pre-cinematic devices such as magic lanterns, Diorama machines, early cameras, etc. throughout the film, by showing how they work and filming ‘through their lens’, the viewer is reminded of the technicalities and processes of filmmaking, and that what they are watching is, indeed, a film. It is the cinematic equivalent of Brecht placing theatrical equipment – lighting, sound boards, etc – and backstage crew in clear view of the audience in order to remind them that the play which they are watching is not spontaneous or natural, but rather the culmination of weeks or months of prep work and rehearsals; i.e. that it is not real life, but rather a representation of it being presented as narrative.

Further, Comrades does not simply display the cinematic and pre-cinematic devices throughout the film, but relates to them in a very Brechtian, self-reflexive way. In his 1974 article on Brecht and self-reflexivity in cinema, Dana B. Polan outlines the attitudes which must be present in a work of art in order for it to be considered self-reflexive. The work, he says, must ‘turn in on itself and speak about its own artistic conventions and presuppositions. This is an attitude of self-reflexivity, of the text making strange its own formal devices.’ The lanternist’s magic lantern, the peep show, the diorama man’s screen show, the mad photographer’s camera, all of these pre-cinematic machines, and the way in which the characters relate to them ;sometimes as an epic or Brechtian and at other times a bourgeois audience, work to self-reflexively bring the real-life audience’s attention to the nature of cinema and spectatorship. 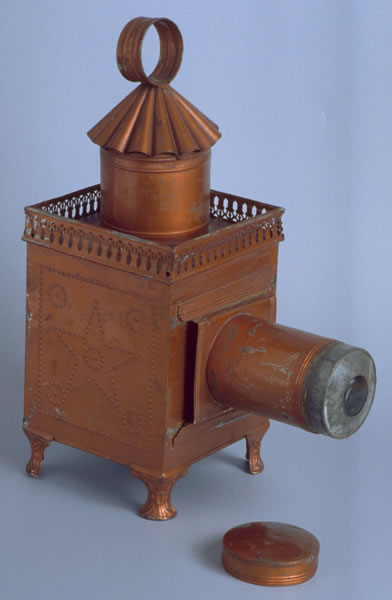 LaPierre Lantern from Bill Douglas and Peter Jewell’s collection, used in Comrades as the lanternist’s machine.

Cara Fraser is a PhD candidate studying Bertolt Brecht at the University of Dundee. She visited the museum on a research stipend in 2017.