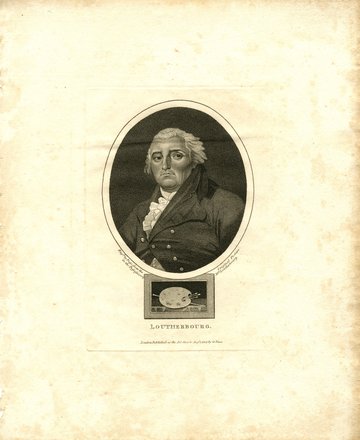 I began my voluntary role at The Bill Douglas Cinema Museum last September as a cataloguer. My specific focus was on creating online entries for the collection of research material left by the late Ralph Hyde, acquired by the museum in 2015. The collection is organised into different research areas, with the majority of my time being spent on his research on photographic panoramas, panorama photographers, and moving panoramas. This blogpost is a result of my engagement with Ralph’s collection as well being a result of a specific area of interest of my own.

Philip James de Loutherbourg (1740-1812) is perhaps best known for his work as a painter and set designer for Theatre Royal, Drury Lane, in the mid-to-late eighteenth century. His interests whilst at Drury Lane were in developing theatrical spectacles through a combination of art, technology and performance. Through the use of lantern slides, he created illusions such as a moving moon and withering trees, with such life-like effects that nature succumbed to the willing suspension of disbelief. Prior to de Loutherbourg, theatrical scenes were painted on completely flat screens, so he can also be credited with the development of the concept of three-dimensional scenery, such as mounds and cottages appearing in shows. (EXEBD 94040/1). This was a novelty attracting the attention not only of the general public, but of artists, such as Joshua Reynolds. Even after de Loutherbourg’s death, many of his techniques were carried forward, often re-named or re-established under the guise of a different inventor, but nonetheless endowing him with a certain ingenuity and eccentricity in the formulation of his ideas.

A historical landmark for de Loutherbourg took place in 1781, when his attention was diverted away from the mainstay of conventional theatre performance. His focus was towards an even greater novelty in theatrical and technical display, the Eidophusikon, which no better demonstrated the originality of his creations.

De Loutherbourg’s creation of the Eidophusikon (or Eidophusicon, meaning ‘image of nature’) followed on from David Garrick’s initial proposal of the concept in the mid-eighteenth century. By construction, it was a 7ft by 3ft by 10ft stage, fronted with a curtain and stage area, placed in parallel to an auditorium; a contraction of a theatre in its near entirety. De Loutherbourg’s intention was not for the Eidophusikon to showcase theatrical performances by people, but for it to be a parade of nature and the sublime. As proclaimed in Figure 3, the “EIΔΩΦΥΣΙΚΟΝ, Or, Image of Nature” is sold as a simulacrum of the world’s natural wonders, “skewing the Beauties of Nature and Wonders of Art”. Thus, the Eidophusikon is a three-dimensional display of Nature’s most sublime aspects. In many ways, it is a trend which can be seen elsewhere in popular visual entertainment of the period, specifically Robert Barker’s patented panorama of Edinburgh in 1789, often credited as the first of its sort. What was increasingly in demand, therefore, were productions of greater realism and immersive-ness. As Brewer (2007) puts it, “experience directed less at intellect than  towards feelings, in order to provide them a more authentic experience”, resulting in a democratisation of such ‘sublime’ experiences. De Loutherbourg took what he applied to the theatre in Drury Lane and amplified it by miniaturisation in the Eidophusikon; a seemingly contradictory notion. 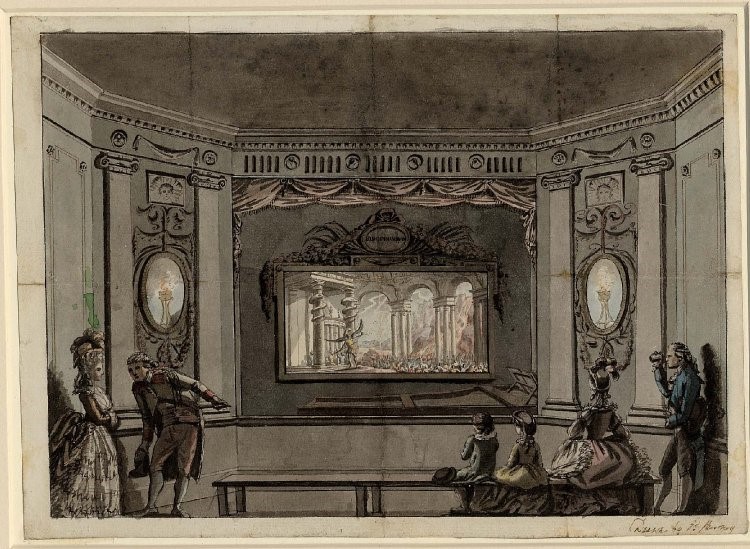 Figure 2 The only remaining view of De Loutherbourg's Eidophusikon. This print is in the British Museum's collections but Ralph Hyde's Collection featurees a photocopy.

By using mechanisms and implements placed backstage and hidden from view, scenes of the Eidophusikon seemed indistinguishable from their natural counterparts. For instance, in ‘The Storm and Shipwreck Conveying an exact and striking Idea of the Frequent Hurricanes in the West Indies’ (Figure 4), de Loutherbourg used the shaking of a thin sheet of copper to fill the auditorium with a soundscape similar to that of thunder. In his book Wine and Walnuts, W.H Pyne recounts how these scenes “seemed a reality” to mariners who had experienced the ‘real’ thing (EXEBD94040/1). By imitation of “thunder, guns, the rushing, lapping sound of waves, the patter of hail and rain and the whistling of winds" (EXEBD94013), the added dimension of sound created a mystifying replication of Nature seemingly by magic. It might never be possible to fully know the extent to which the Eidophusikon developed its audiences understanding of the world around them, yet it is explicit in its demonstration of a periodic fascination with real and imaginary aspects of nature. 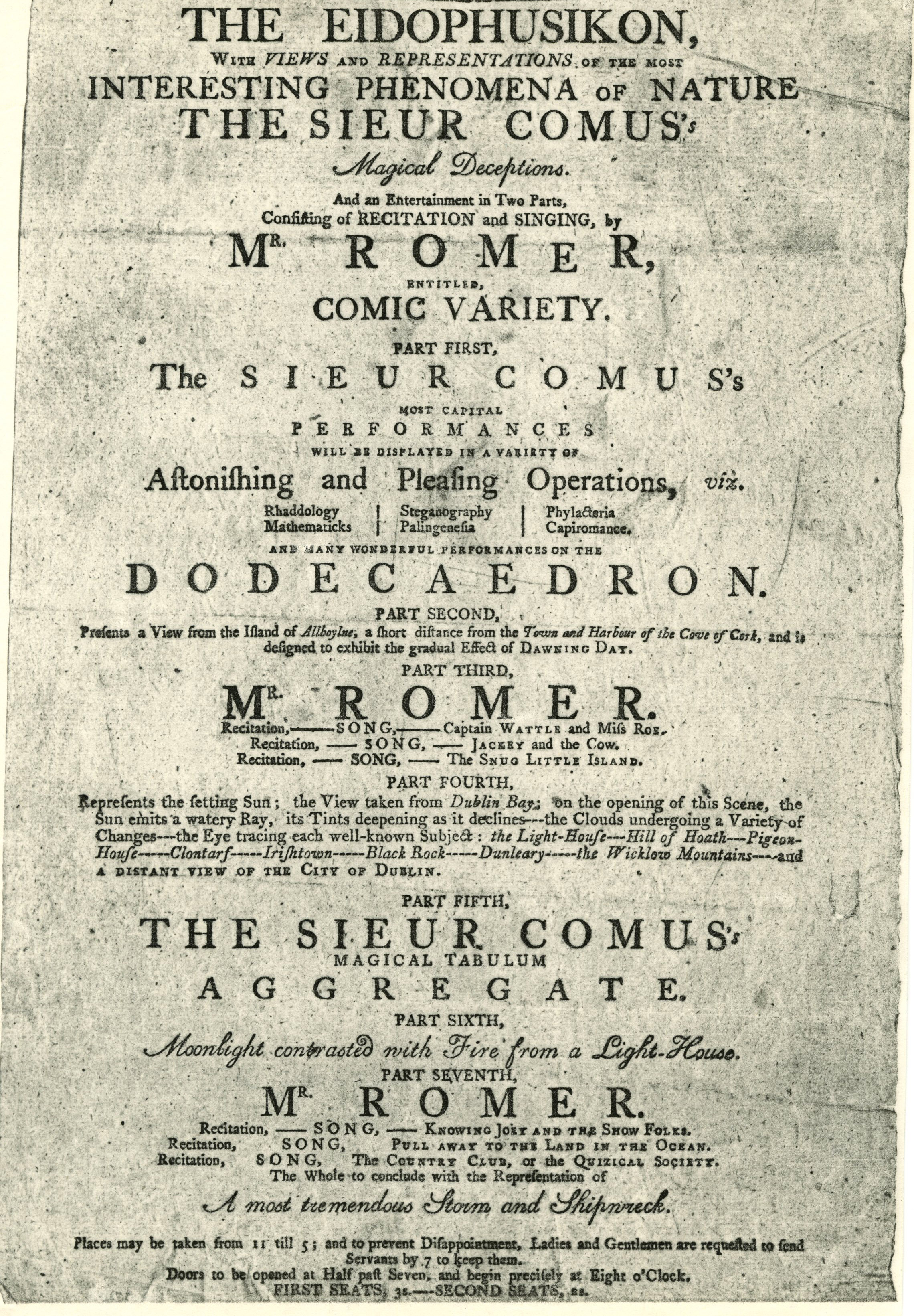 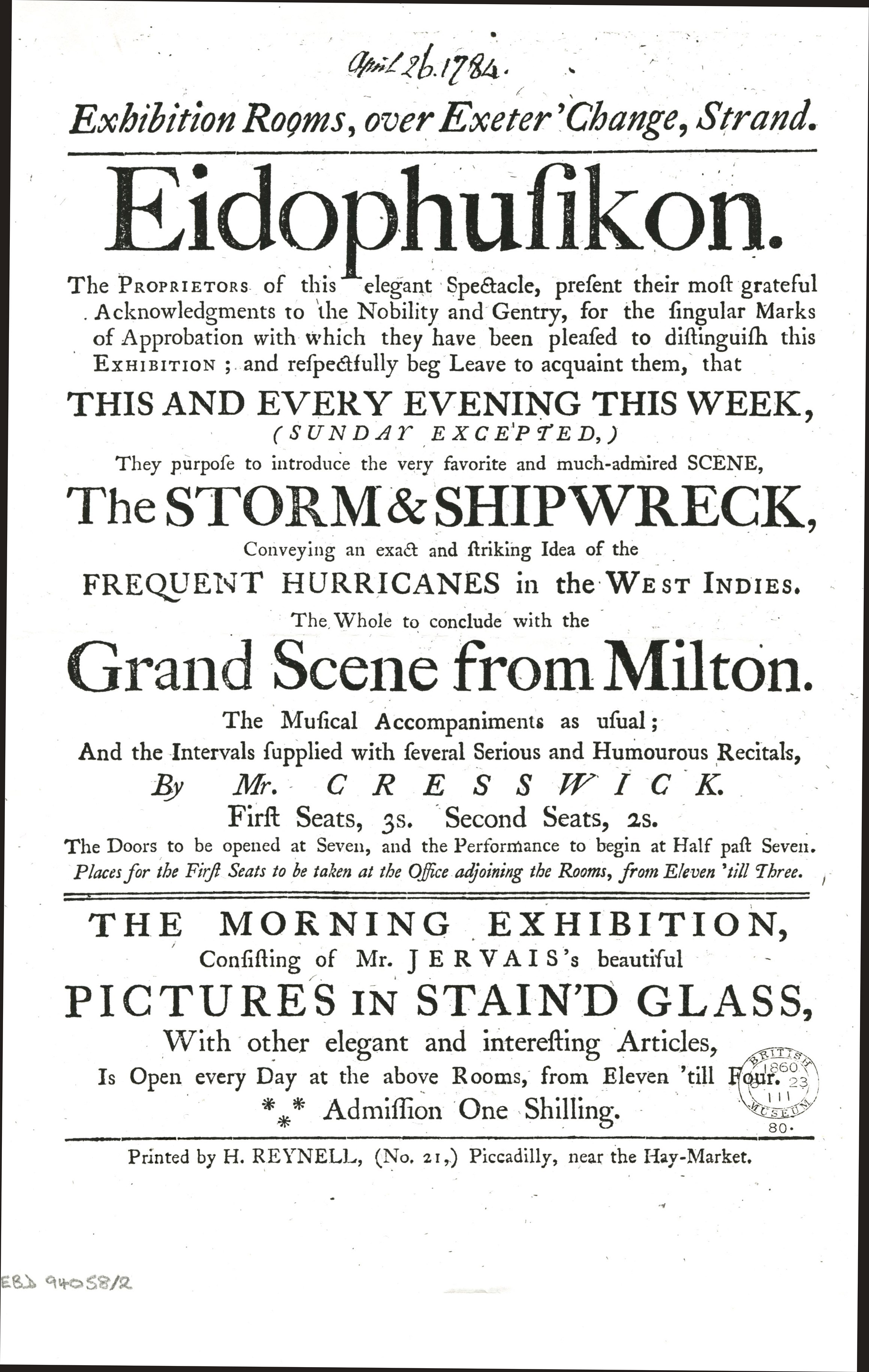 In the “Storm at Sea... with the loss of an East Indiaman”, de Loutherbourg characterises nature’s immense power against a scale-model of the East Indiaman, fighting against the riptide and clashing of waves (for those interested, a modern computer-generated version has been made here). The success of the Eidophusikon can therefore be found in its fashioning of an experience synonymous to the cinemagoer today: an atmosphere optimised for immersive experience. The scenes displayed in the Eidophusikon were considered to possess the most raw and visceral of qualities, to the extent that they resembled Nature. Again, in Wine and Walnuts, Pyne describes how scenes “appeared to recede for many miles” and Verwiebe (2007: EXEBD 36953) notes how the observer was meant to smell the sweet scent of the morning. Audiences were able to experience something which, in reality, they were unlikely to ever see; perhaps this is the underlying success of the Eidophusikon, as with modern cinema.

In short, Kornhaber’s (2009) suggestion that the Eidophusikon offers a “domesticated, reduced” spectacle of nature is very much true. De Loutherbourg tames the destructive capacities of nature and expresses them in an essentially metropolitan and elaborate setting, one which is ultimately delimited to the boundaries of stage production. This is where Brewer (2007) claims its popularity is grounded: the Eidophusikon developed as a response to urban life by offering an escapism to distant, sometimes even fictional places, and their becoming visual objects to enjoy. For some, this process was not hugely popular. In Book Seven of his autobiographical poem The Prelude, William Wordsworth writes of how one can see “All that the traveller sees when he is there” but then of his distaste “To watch crude Nature work in untaught minds”. The critique is ultimately framed around the democratisation of Romantic landscapes by creation of an aesthetic appeal to baser instincts. Yet, experiences of visual and auditory sensation created by the Eidophusikon are pre-emptive of a more modern trend of removing distance through immersion. Wordsworth largely stands as an early critic to the advent of globalisation. 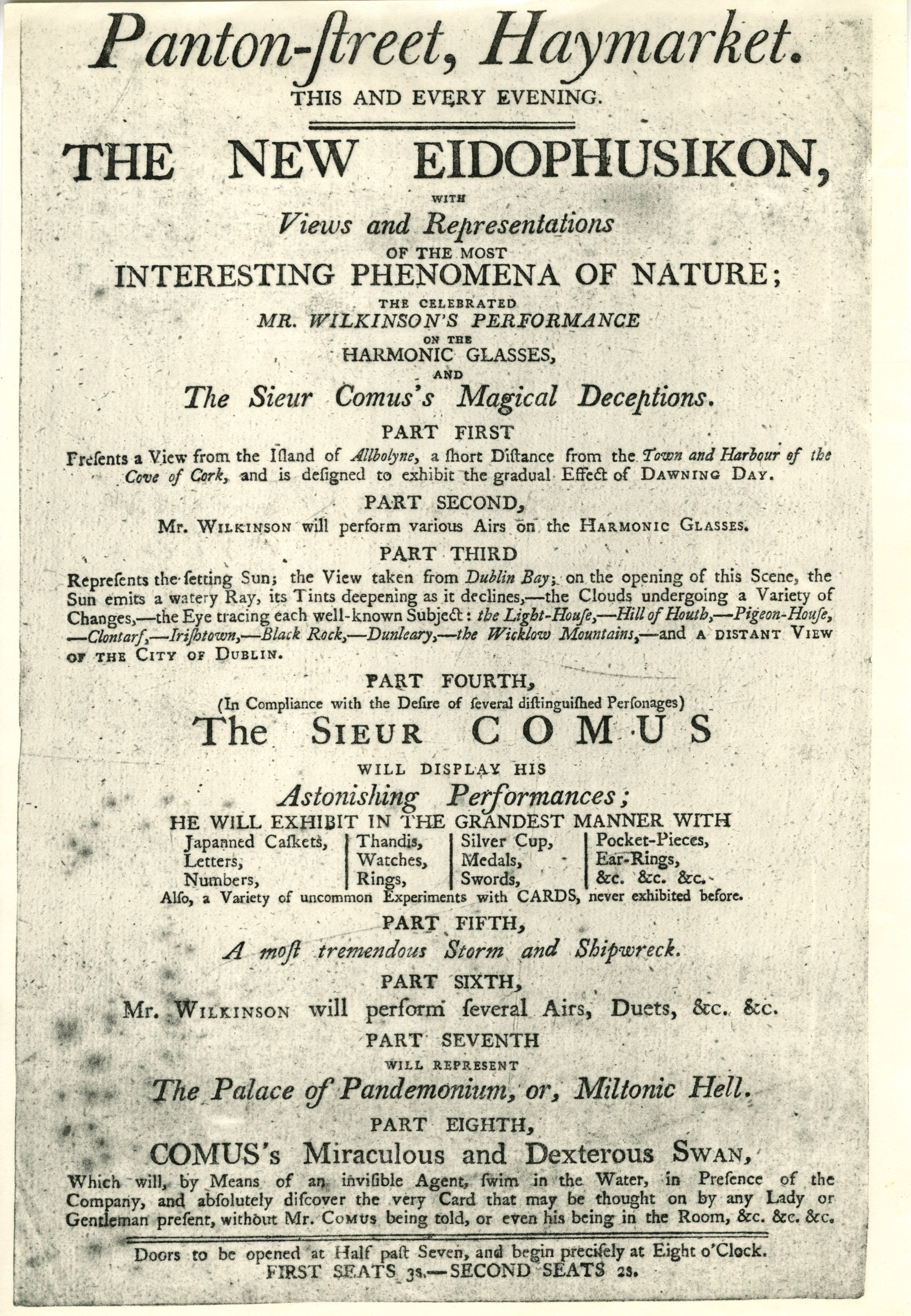 Even after the original Eidophusikon was destroyed by fire in 1800, the concept lasted long after the death of de Loutherbourg, with newer versions having been made well into the 1850s under the title of ‘The New Eidophusikon’ (Figure 7). Its ultimate demise, and possibly why it is so unheard of in today’s society, was founded by its replacement with newer forms of immersive media, including the already well-established magic lantern and, into the late nineteenth century, early forms of cinema.

From the vantage of hindsight, the Eidophusikon fits within a broader, cross-century fascination with ‘images’ of exploration, yet also redefines theatrical performance. I think this is what drew my attention to it, in many ways it is the forefather of special effects. Further still, it is at once a piece of art and theatre, yet also a compilation of technologies most definitely uncharacteristic in its stagecraft. By working on Ralph Hyde’s collection of research material, I have been fortunate enough to stumble upon works relating to the Eidophusikon and so began my interest in it. To others looking for lines of research to pursue in relation to the field of panoramas, I would suggest that Ralph’s collection is an excellent place to start.

Photocopy of an article by Edward F. Rimbault, extracted from Notes and Queries, 4th Series, X, July 20, 1972. The article traces De Loutherbourg's early career as a designer of stage scenery at Drury Lane Theatre and his subsequent invention of the Eidophusikon, first exhibited in Lisle Street, Leicester Square in 1781. The article quotes an advertisement for the exhibition and parts of a very detailed description of it by W. H. Pyne in his book 'Wine and Walnuts.' The final part of the article contrasts the design of the Eidophusikon with the Panorama and Diorama and states that it most closely resembled the Cyclorama of the 'Earthquake at Lisbon', exhibited at the Colosseum in Regent's Park.

History of the use of transparencies in art, with chapters on early developments, including Gainsborough's Exhibition Box, Loutherbourg's Eidophusikon.